Because of the fallen angel’s obdurate pride, which eventually turns into vanity, Satan reaches his fall. Milton’s Satan in Paradise Lost is a complex character who is meant to be the evil figure in the epic poem. Whenever given the chance, Satan tries to undermine God, whom he despises. Satan’s pride initiates his disobedience to God. The opening scene shows Satan and his other former angels on a burning lake as they awaken after they were cast out of Heaven.

Don't use plagiarized sources. Get your custom essay on
“ Satan’s Pride in Paradise Lost ”
Get custom paper
NEW! smart matching with writer

From the beginning all the fallen angels realize, “to be weak is miserable/…

He assured them, “All is not lost– the unconquerable will,/ and study of revenge, immortal hate,/ and courage never to submit or yield. ” (l. 106-108, I) Together they joined in “hurling defiance toward the vault of Heaven. ” (l. 669, I) Satan, with all his pride, believes that he and his demons will actually be able to defeat God.

All the demons have their own plans of how they should go about being in Hell. Whether to fight back with war against Almighty God, or to be content with making their Hell a Heaven.

They agree with Beezlebub that the right way to defeat God would be to sabotage his “new race, called Man,” whom was “favored more/ of Him who rules above. ” (l. 348-351, II) They show how conniving they are when Beezlebub says, “Thither let us bend all our thoughts, to learn/ what creatures there inhabit, of what mould/ or substance, how endued, and what their power/ and where their weakness: how attempted best, by force or subtlety. ” (l. 354-358, II) Satan volunteers himself to be the one who will travel to this unknown world.

Upon arrival in Eden, otherwise known as “delicious Paradise”, Satan struggles with despair and questions if he shall repent to God; but his never-ending evil comes forth and vanquishes his questionable state, “yet all [God’s] good proved ill in me/ and wrought but malice. ” (l. 48-49, IV) “So farewell hope, and, with hope, farewell fear/ farewell remorse! All good to me is lost;/ Evil, be thou my good. ” (l. 108-110, IV) When Satan first sees Adam and Eve he notices that they are happy as can be in “naked majesty” and didn’t have any shame in that.

Adam reminds Eve that, “in Paradise that bear delicious fruit/ so various, not to taste that only Tree of Knowledge” because it is “the only sign of obedience left” (l. 423-428, IV) Once Satan, disguised as a serpent catches Eve alone he dupes her into eating the forbidden fruit so she can disobey God, “greedily she ingorged without restraint,/ and knew not eating death. ” (l. 791-792, IX) Later, Adam ate the fruit also because he couldn’t bear to live without Eve. When Satan returns to Hell he speaks to the devils at Pandemonium, they cheer, as they all think he has defeated God.

But in actuality, God always wins. Satan then hears a loud hiss from his audience. Everyone in hell has been turned into snakes unwillingly, which is punishment from God for all their sins. In addition they have no food to eat, everytime they attempt to from a tree it turns to dust. Overall, Milton’s Satan is a character whose hubris causes his fall. He was so prideful that he believed that he and his demons from Hell could do anything, even defeat the omnipotent God. God proves to be in control of everything not just Heaven, even hell, he is undefeatable. 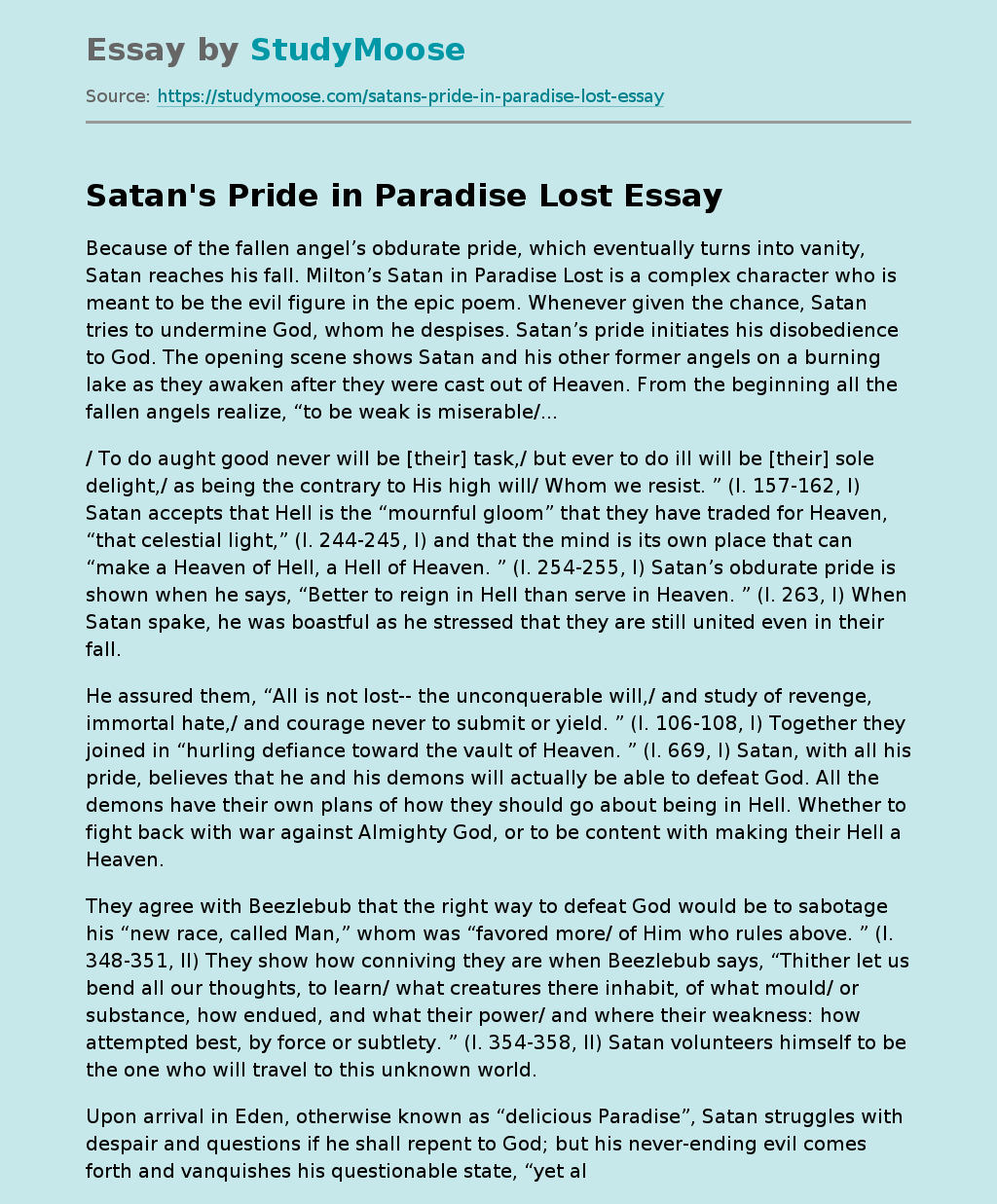