Contrast and Similarities between Beowulf and “Beowulf”
Beowulf, an epic written down in the year 1060 by the Beowulf Poet, is the epitome of what true writing is, defining the standard of the epic itself. The more modern film of “Beowulf”, produced in 2007, is an attempt to do justice to the Beowulf Poet’s masterpiece. The poem and film have several key similarities and differences which influence the reader/viewer. Important similarities between the two include the heroic characteristics of Beowulf and the severing of Grendel’s arm; however, the movie does have some drastic differences from the text such as Beowulf’s seduction by Grendel’s mother, and how the product of this sin is his son the dragon, while in the text this beast is regarded as a rogue monster.

Don't use plagiarized sources. Get your custom essay on
“ Comparison Between Beowulf the Epic and Beowulf the Film ”
Get custom paper
NEW! smart matching with writer

Similarities between the text and the movie are established to stay true to the theme of Beowulf, a theme in which a hero conquers great odds and shows what the epitome of humanity can achieve; this theme is essential to the development of any true epic.

The most prominent similarity between the two is the characteristics granted to Beowulf, the key trait being arrogance. Arrogance is an important trait of any epic hero, in the film this arrogance is established in Beowulf’s tale of swimming in the ocean during which he states he slew several sea monsters, however in the background his followers can be seen stating that the original number was much smaller than Beowulf has stated. This arrogance is mirrored in the text when Beowulf is proclaimed as “…the strongest of the Geats – greater and stronger than anyone anywhere in this world” (Beowulf Poet 110-111), while in truth it is unlikely that he was the greatest warrior of the time, making this a very boastful statement.

This arrogance is again mirrored when Beowulf refuses to fight Grendel with any weapons or armor, in the film he simply strips before sleeping and in the text he states that “…My Lord Higlac might think less of me if I let my sword go where my feet were afraid to, if I hid behind some broad linden shield: my hands alone shall fight for me, struggle for life against the monster.” (Beowulf Poet 169-174). This arrogance is persevered in the film to demonstrate the characteristics of a hero. At the time heroes were people who had such a boastful attitude, thus the film writers made sure to impart this narcissism onto the viewer to show Beowulf’s strength of attitude. The film establishes a second similarity to the text by illustrating Beowulf’s fight with Grendel. Beowulf is displayed grappling around with Grendel and eventually removing his arm, claiming it as a sign of “The Victory, for the proof, hanging high from the rafters where Beowulf had hung it, was the monster’s Arm, claw and shoulder and all” (Beowulf Poet 356-358). This “prize” is an important object that is established in both the text and the film to display both the epic struggle between Beowulf and once more show how strong Beowulf truly was, further establishing him as an epic hero.

During the course of the film, there are some artistic liberties taken which change the plot from that of the text; these changes were made to display a more unified tale between that of the younger Beowulf and the older Beowulf. These differences begin immediately following the death of Grendel, coming to head when Beowulf confronts Grendel’s mother. In the text, Beowulf is seen to fight with Grendel’s mother until “Her body fell to the floor, lifeless, the sword was wet with her blood” (Beowulf 523-524). This is a drastic difference from the film, where Grendel’s Mother is shown seducing Beowulf promising him a long life and a successful reign if he gives her a son along with the golden horn he received for killing Grendel. This change was made to make a smooth transition between the two parts of the epic, the first concerning Grendel, the second concerning the dragon. It is at the end that the second change, and the product of the transition, is shown. This product is the dragon, who is shown to be the son of Beowulf and Grendel’s Mother. This further differs from the text where Beowulf fights a “dragon hiding in his tower” (Beowulf 610) that has been terrorizing the country side, not his own offspring. These changes are made to make a connection between the two parts of the epic tale of Beowulf. In the text, the tales of the dragon and Grendel are completely unrelated thus may be viewed with some confusion by the reader. However, when the dragon is shown to be Beowulf’s son who comes back for revenge, the death of Beowulf is that much more conclusive showing him wrapping up the mistakes of his life and fully concluding his tale.

Comparison Between Beowulf the Epic and Beowulf the Film. (2016, Mar 20). Retrieved from https://studymoose.com/comparison-between-beowulf-the-epic-and-beowulf-the-film-essay 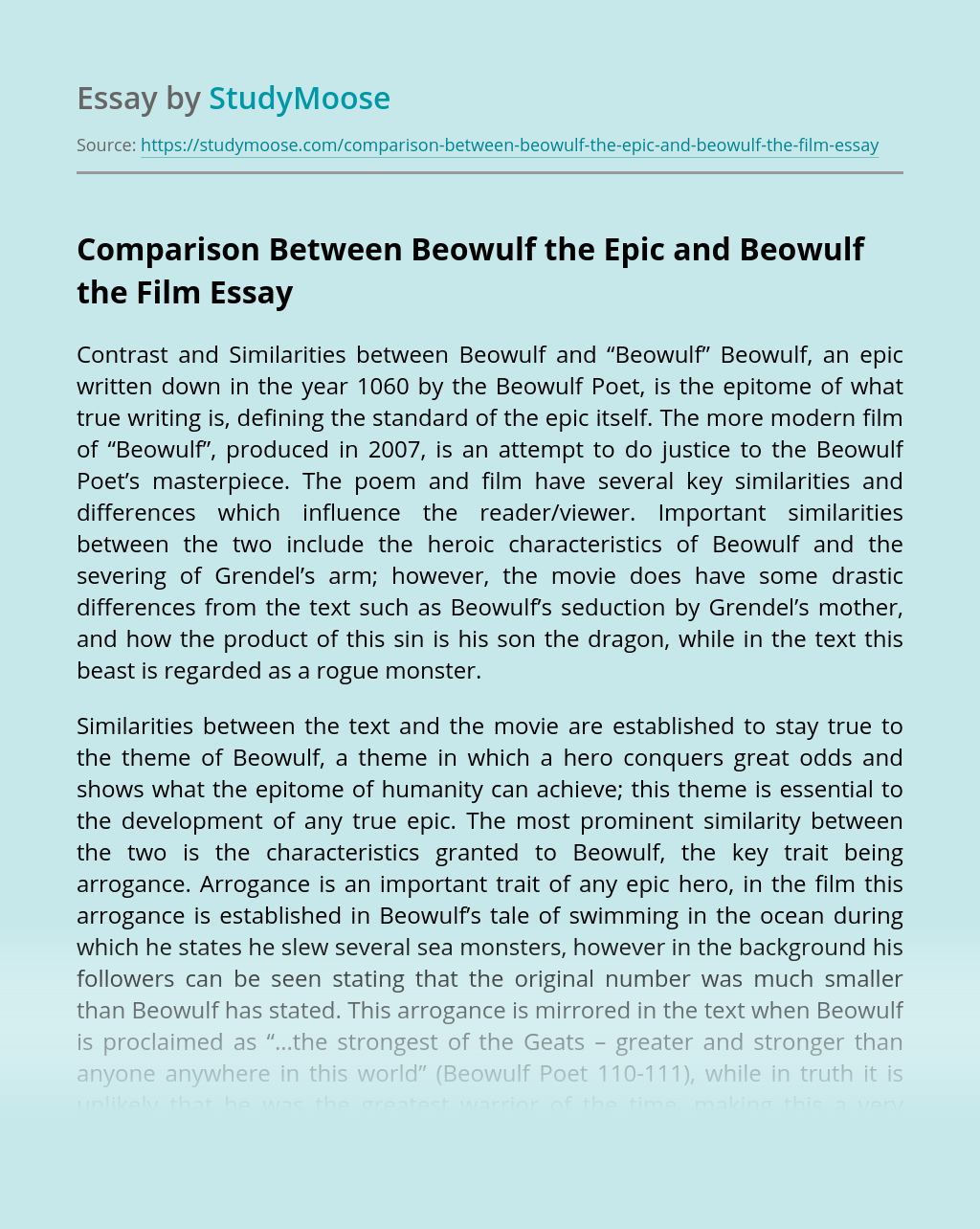