Elegy Written in a Coutry Churchyard

Q1. Discuss Gray as a transitional poet with special reference to ‘Elegy Written in a Country Churchyard’. The period 1730-1770 marks the beginning from a movement from one distinct phase of English poetry towards another .The poets were getting gradually exhausted with the neoclassical ethics of clarity, reason, sophistication, and etiquette, its economic wording, ,rationale and wit. In the literary circle can be perceived the advent of The Romanticism which however customarily began with the publication of ‘’Lyrical Ballads ‘’in 1798 which was an aesthetic rebellion against the principle of the fashionable formality of the eighteenth century Neoclassicism.

Don't use plagiarized sources. Get your custom essay on
“ Elegy Written in a Coutry Churchyard ”
Get custom paper
NEW! smart matching with writer

These poets of this juncture- William Blake, Thomas Gray, and Robert Burns are caught in the middle of neoclassic writing and the Romantic Age, are therefore fittingly known as the Transitional poets. Gray belongs to the age (1716-1771) in which he was born as well as heralds the dawn of a new era in poetry.—he bridged the gulf. Though he retained some of the Neo-classical features like conventional poetic diction and forms, he favoured freer forms and bolder language.

His poetry preached a return to nature, honest sentiment, though he shared the didacticism of the Neoclassicism. Thus he makes a dignified combination of contradictions .

The chief feature of the Classical poetry which Gray inherited was the frequent tendency to be didactic and philosophical. S. A. Brooke aptly points out that Gray’s poetry was too weighted with moral reflections. His sententious moralizing are quite commonplace in ‘’Elegy’’. While glorifying the simple rustic life, Gray warns proud and ambitious people not to laugh at the low obscure social position of the poor.

‘’Let not Ambition mock their useful toil, Their homely joys, and destiny obscure;

Nor Grandeur hear with a disdainful smile
The short and simple annals of the poor.’’

Although the humble rustics led an obscure life they might have been far happier than the pompous nobles. With a grave tone of moralizing Gray glorifies Death as the ultimate leveler –the pride of the proficient, the magnificence of the mighty ,the blessing of beauty cannot save a man from the fatal doom. Death and oblivion are the ultimate end of puny human life. ‘’The boast of heraldry, the pomp of pow’r, And all that beauty, all that wealth e’er gave,

Awaits alike th’ inevitable hour.
The paths of glory lead but to the grave’’.

The morbid moralizer also upholds the unhonoured and unsung death of the rustics by reiterating that that neither gorgeous monuments nor animated statues connote anything significant as in no way life and vitality can be restored to the corpse. Gray even sermonizes about the dismal and pathetic reaction the mortals display at the time of his departure from this transitory world. Life is to all a contradictory confrontation of contradictions , but nobody likes to quit this world and at the time of death casts a prolonged and regretful l and wistful look behind. Irrespective of his stature everyone is afraid of oblivion of which death is the harbinger.

Neoclassical poetry boasts of a conscious use of ornate poetic diction . They were very cautious to differentiate the language of poetry from the naïve language of prose. Gray also reveals the influence of his age in his apt fondness for rhetorical expression, conventional artificial phraseology and skillful observation of metre. With brilliant use of personification and metaphor Gray at the very outset portrays the nightfall at the village-just as the tolling of the curfew bell announces the death of a person so also the ringing of the evening bell designate the death of a day.

‘’The curfew tolls the knell of parting day’’. What follows is a proverbial use of the figure of speech ‘’Transferred Epithet’’- ‘’The plowman homeward plods his weary way,’’ Rhetorics like personifications and Synecdoche are in brilliant use when Gray employs the abstract to stand for the concrete to emphasize that the persons of ambition and grandeur should not laugh at the simple annals of the poor. ‘’Let not Ambition mock their useful toil, Their homely joys, and destiny obscure;

Nor Grandeur hear with a disdainful smile
The short and simple annals of the poor.’’

Gray resorts to ‘’ Interrogation’’ to accentuate the fruitlessness of extravagant display of regret after death—‘’Can storied urn or animated bust Back to its mansion call the fleeting breath?’’ Metaphors crowd pell-mell when Gray compares the wasted genius of the hamlet to the brightest gem confined in the sea-cave or enchanting flower cramped in the desert. Individuals stand for their respective class when Gray surmises that what these rustics could have achieved , if favoured by fortune. ‘’Some mute inglorious Milton here may rest, Some Cromwell guiltless of his country’s blood.’’

Circumlocution (‘inevitable hour’),Onomatopoeia(‘the lowing herd’) and Alliteration (‘brook that babbles by’)are often utilized to create the utmost poignant appeal. Thus the poem bears the unmistakable reflection of the Augustan or pseudo-Classical school of poetry. The dignity of utterance and the decorum of literary borrowings enhance his neo-Classical temperament. But Gray is a precursor of Romanticism and his Elegy displays how he tended to break with the Classical tradition. Now here is exuberance of emotion, celebration of democratic impulse and a magnificence melancholy which make the Elegy a brilliant “reconciliation of opposites’’.

Pope in his ‘’Essay on Man’’ speaks of confining the arena of literature only to the sophisticated urbanized people where as the Romantics celebrates the democratic impulse. Wordsworth in his ‘Preface to the Lyrical ballads”(1800) states that his principle is ‘’to choose incidents and situation of common life and to relate or describe them throughout …’’. Gray also brings out sympathetically the annals of the villagers who led a simple life far away from the frantic frenzy of the sophisticated urban people and who are not governed by jealousy and ambition. With an iconoclastic confidence he equalizes the glorious and the inglorious. C. J. Weber is right ‘’Gray’s unprecedented and courageous act lay in his addressing his elegy to the memory not of princes but of humble workmen buried in now-neglected graves after living lives of hard-handed toil’’. Like ‘The Seasons’, ‘Elegy’ is set in a humble rustic nature background. It is a dignified call to go back to nature.

As Wordsworth preferred ‘the incidents and situation of humble life’, the very first stanza makes a whiff of fresh air to blow through the suffocating atmosphere of contemporary poetry, though the Wordsworthian deification of Nature is altogether missing here. If Romanticism is defined as the ‘Renaissance of wonder, in his ‘Elegy’ ,as in his ‘The Bard’, or ‘The progress of Poesy’ there are glimpses of sentiment and emotion. The poet becomes sentimental when describing the sleep of the dead which is so eternal that the smell and chattering of morning or fresh lively breeze will not wake them up. Instead of catering to dry reason and logic Gray indulges in fancy and speculates that some of these rustics might have in their humble way,like Hampden resisted the oppression of the tyranny or bore in their heart the poetic frenzy of Milton—but everything is lost.

The ‘Elegy’ is coloured by subtle sense of melancholy and gloomy note. A brooding sadness engulfs the poem when Gray writes with bitterness that they are left to rot in obscurity in tiny churchyard while pompous fellows rest under marble monuments. The poet laments the ill -luck and extreme poverty of these rustics which hindered the flourish of their genius. Specially remarkable is the stanza XXII where Gray delineates the eternal human impulse of being remembered after death.

Gray adventured forth into “unfamiliar areas in poetry’’ as he brought back to life the use of the first-person singular, for example “One morn I missed him on the customed hill….’’ which had been “considered a barbarism by eighteenth century norm.” Romanticism,it can be mentioned , is ‘egotistical sublime’. Thus ‘’Elegy’’ appeared at a point when the change was in the air, but had not completely arrived. Thus Gray’s poetry is landmark in the literary history of England. It is an epitome of the changes that were coming over the literature towards the close of the 18th century. The ‘Elegy’ perfectly illustrates the conflict between the Classic and the Romantic ideas and the ultimate triumph of Romanticism; after all‘’The old order changes yielding place to new’’.

Elegy Written in a Coutry Churchyard. (2016, Oct 15). Retrieved from http://studymoose.com/elegy-written-in-a-coutry-churchyard-essay 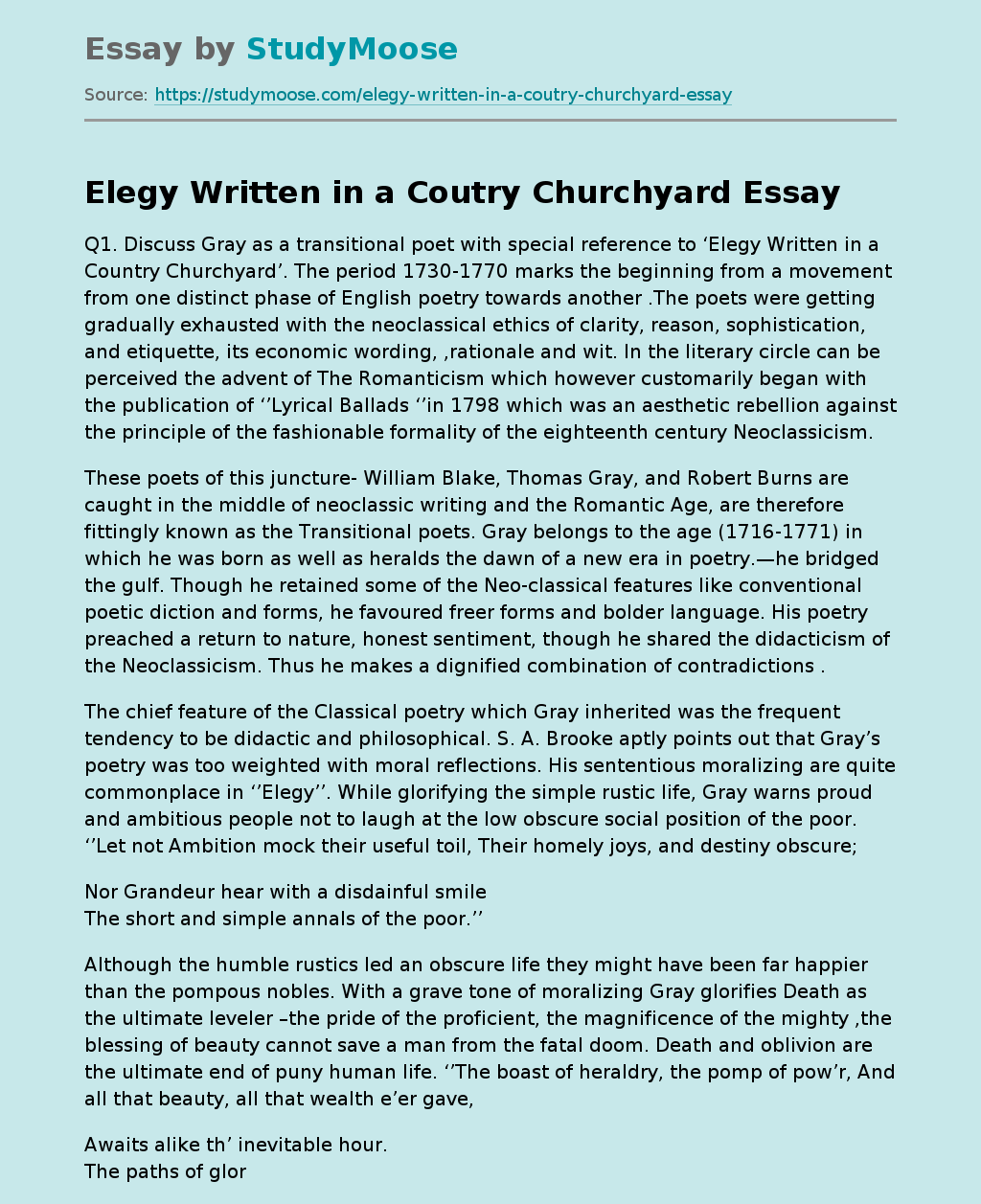