"The Metamorphosis" written by Franz Kafka

“The Metamorphosis,” written by Franz Kafka in 1912, follows several societal patterns that are frequently observed in Kafka’s other works. The idea of growth and degradation is one of these patterns. Another is the aspect of human nature that causes deception as a defensive device. Within “The Metamorphosis” these two key patterns come together to create a story that employs magic realism and dream logic to create a drama of illness. It is said in Roy Pascal’s book Kafka’s Narrators: A study of his stories and sketches that the abstract structure of the story “forces the reader to look beyond the surface network of the story for another symbolic meaning” (39).

Don't use plagiarized sources. Get your custom essay on
“ “The Metamorphosis” written by Franz Kafka ”
Get custom paper
NEW! smart matching with writer

By taking a closer look at these two together, deeper meaning and insight is found.

The concept of degradation versus growth is central to the meaning of “The Metamorphosis.” The story opens at the beginning of Gregor’s decent to death with the climax of the story in the first sentence.

The story itself is merely the working out of the climax. Unlike some of Kafka’s other stories, “the ‘metamorphosis’ is not manifestly connected with any idea with any idea of punishment or self-punishment, but merely stated without explanation at the beginning; it is now on the punishment itself that Kafka dwells at length” (Luke 105). This punishment that Luke speaks of is that for “the unforgivable offense of self-assertion” (104) of which Gregor is guilty of when he takes over the role of breadwinner in the family. Gregor’s deterioration follows another commonly found pattern of Kafka’s stories: “the hero falls from corporal self-sufficiency to hunger and then to death and silence […]” (Thiher 40).

This pattern can also be observed in Kafka’s “A Hunger Artist” and in “The Judgement.” Though at first the reader may want to interpret the metamorphosis as metaphorical, it is meant to be taken literally.

The process of Gregor’s transformation and decline to death is clearly illustrated by the division of the story into three chapters, one for each of Gregor’s outbreaks (Greenburg qtd. in Dixon 400; Luke 103). The first chapter involves Gregor’s initial loss of power and influence in the family, which is mirrored by his father’s gain in power and authority as, once again, he becomes the head of the family. Gregor’s loss of power is not only within his family but also in society as he becomes entirely disconnected and becomes increasingly reliant on his family for his survival. It seems as though the family roles are reversed after the metamorphosis takes place; instead of the family being reliant on Gregor, Gregor is reliant on his family. At the expense of Gregor’s life, the rest of his family is finally released from the chains and limitations that Gregor had imposed on them all. Gregor is unsuccessful in his attempt to communicate with his family as his fall to “verminhood” is follwed with a fall from the language that might have been able to explain the original fall (Thiher 41).

The second chapter involves the second outbreak where Gregor runs out of his room and is attacked by his fear-filled father. The apple that becomes lodged in his back further illustrates the decay that is occurring in Gregor who is now slowly starving to death as his family begins to neglect him as they all have jobs to deal with. By the third and final chapter, the family has taken on a new form. They are all working and they have taken on three boarders. Gregor’s room has become a storage room for those things that are no longer wanted, including Gregor. The third breakout occurs as a result of Grete’s playing of the violin. Ironically, it is Grete, who originally is the advocate for Gregor remaining as part of the family, who finally says that Gregor is no longer Gregor and that he must be disposed of (Kafka 407). I suppose as time progressed, she realized that if any of them were to grow and mature then they must rid themselves of everything that stands in their way (i.e. Gregor).

As a contrast to Gregor’s inevitable death is the final image of the story. The family has been transformed. From being useless and paralyzed, they become productive providers. There is a sense of revival as they begin to look to the future. The transformation of Grete is as though “[s]he awakens to her body’s sufficiency once Gregor has disappeared” (Thiher 44). As a final symbol and illustration of the significant metamorphosis and growth experienced as a result of being released from Gregor’s control, the parents decide that it is time to find a husband for their daughter (Kafka 412). The degradation of Gregor, mirrored by the growth seen in the rest of his family, is furthered by the deceptive attitudes they all take on.

As the story begins, Gregor, the person most closely affected, behaves as if nothing is out of the ordinary. Even the other characters respond as if it were a natural event, such like that he had woken with a cold or measles. According to Luke, “[this] disparity can be described in psychological terms as a defense-mechanism involving reality-denial and affect-displacement […]” (111). Thiher also acknowledges that the story is largely based on misrepresentations and deception (48). Gregor appears to have several delusions. Firstly, at the beginning of the story, he is delusional in that he thinks that his bugness is merely temporary (Kafka 377). Secondly, he views his reputation at work to be much higher than it actually is. With the arrival of the chief clerk, we, the readers, realize that he has not been as exceptional at work as he leads us to believe (Kafka 380-81). He has misrepresented his job security. He also is delusional with regard to his family’s social and monetary positions. He was under the impression that his family was unable to survive without him so when the family business failed, he assumed the position of breadwinner of the family, allowing his father to grow increasingly sedentary.

As the metamorphosis progressed, all of these delusions and self-deceptions were revealed as the deterioration of Gregor advanced and the growth and metamorphosis of his family occurred. What in fact was later discovered was that his father had a sum of money stored away and that in fact, he had retained some of the wealth of the family business and that all the members of the family were quite capable of working to make ends meet. His father had deceived him. It appears that it was all of these deceptions that transformed Gregor’s father into a judge who condemned Gregor “to disappear, to die, and to become the rubbish that the sturdy charwoman [could] discard” (Thiher 44). As he loomed over Gregor in his new uniform, Gregor recognized the transformation and began to realize his role in the subsistence of his family was quickly become inconsequential. As Gregor’s role as a member of the family dwindles, the view his family has toward him changes drastically.

When the story beginnings he is seen as Gregor, a travelling salesman but by the end of the story he is seen by his entire family as no longer being Gregor; he is seen as merely a giant bug (Kafka 407). Thiher concurs with this as he says that “[b]y applying throughout the story the kind of dream logic that allows one to be and not to be the same thing, to be Gregor and to be non-Gregor the vermin, Kafka creates the possibility for paradoxical misrepresentation at every level […]” (50). The dream logic focuses our minds on the inessential details of the story that give us a greater understanding of who Gregor was the life he faced now that he had been transformed. It seems that these small details tend to draw empathy from the reader, followed by disbelief and then laughter at the absurdity of the situation.

The laughter and comedic effects that result are also as a result of the logical inhibition that is required to follow such an absurd plot as it provides a relief of energy tension (Luke 111). “Gregor’s ‘flat’ reaction, as Kafka presents it, is horrifying because of its ‘uncanny’ psychotic […] character; because it insidiously enlarges an implied rift between daily actuality and monstrous possibility; and because it casts dreadful and tragic light on human incapacity to appreciate disaster” (111). The extent of deception that Gregor placed on himself is illustrated in his response to his new body.

He assumes his situation is a hallucination or dream and he doesn’t believe that it is actually happening to him. It seems through the family’s reactions (and Gregor’s) that the loss of his human shape is intolerable and therefore it cannot be true. This logic leads both Gregor and the rest of his family to suspend belief, continue on with life as if nothing has happened, and thus, acting as if everything is as it always was. Society in general appears to condition the members of society to respond in this way (hiding our faults and fears) so that a minimal amount of attention is drawn and we are not seen as out of the ordinary. The alterations of Gregor’s existence are seen as “purely imaginary” and Gregor believes that his “mornings delusions” will gradually disappear when he gets out of bed (Kafka 377).

He sees the strangeness of his voices as being the first sign of a cold, not as a product of his metamorphosis. By the end of the first section or chapter of the story, Gregor has almost entirely lost hope for a end to his “bugness.” It appears though that, even for his family, the disbelief and deception blinds them from seeing the truth. The Grete and Gregor’s mother believe that it is merely a temporary situation and that eventually Gregor will return to his previous state. Gregor’s father sees the “metamorphosis as something that is to be expected from Gregor” (Luke 113). Gregor attempt to rationalize his experience, “hunting helplessly for explanations of the inexplicable” (Luke 114). He views the symptoms of his situation as part of “a dream, a cold in the head, a foolish hallucination induced by pangs of conscience, [or] the magical outcome of malevolent detraction by his co employees” (Luke 115).

Pascal, Roy. Kafka’s Narrator’s: A study of his stories and sketches. Cambridge, UK: Cambridge UP, 1982.

"The Metamorphosis" written by Franz Kafka. (2016, Jul 03). Retrieved from https://studymoose.com/the-metamorphosis-written-by-franz-kafka-essay 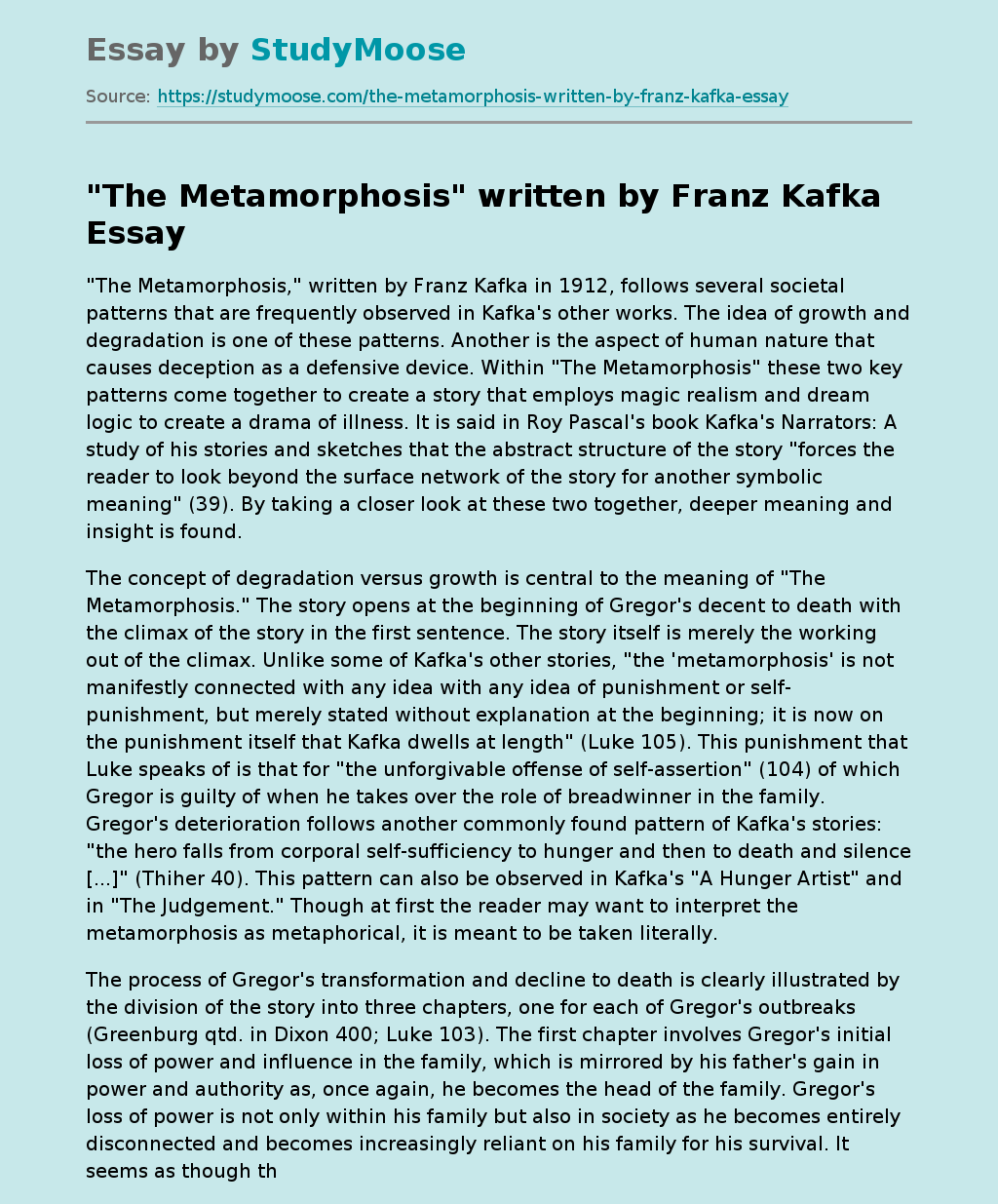