The Metamorphosis by Franz Kafka is a prime example of how one person’s changes can have an effect on the people around them. In times of need, you would expect that your family or loved ones will be there to help you, but the opposite happened with the protagonist Gregor. The theme of alienation is described through Gregor’s character. After Gregor’s metamorphosis from an ordinary man and traveling salesman to a gigantic insect, his transformation causes other remarkable changes in the story”changes that directly bear on his family.

Don't use plagiarized sources. Get your custom essay on
“ The Metamorphosis by Franz Kafka is a prime example of how one ”
Get custom paper
NEW! smart matching with writer

Gregor’s alienation and its effect on his relationship with his family can be shown through his lack of willing interaction with his family members, the huge burden he puts on the family after his metamorphosis, and his family’s hope to get rid of him because of his transformation. The change from human to insect occurred due to the alienation he faced from his family. That alienation occurred throughout the story, eventually leading to Gregor’s death.

Gregor was a prisoner in his own family. He was trapped in his own house and stuck there helpless as he is not close with his family. To show how disconnected he is from his family, the action of him locking his doors proves just how secluded he is from his family. For example, in the midst of his family trying to get him out of his room, Gregor congratulated himself on his precaution, acquired from traveling, of locking all doors during the night, even at home.

(Kafka 3) This goes to show that even before his transformation, Gregor was already isolated from his family. Him locking his door shows that he’s living in a different world from his family. Gregor did everything for his family but they never really opened their arms for him. They enjoyed the things that came out of his labor but never showed him any kind of appreciation. Gregor’s metamorphosis shone a light on how insignificant he was to his family before and after his transformation. Gregor’s alienation took place after the oath he had made to his family years back. He was going to put all his time and energy toward taking his family out of debt. However, he was forced to do this on his own. He felt as if his family was no longer capable of working so he took it in his own hands. His father had not worked at all for five years now and thus could not be counted on for very much (Kafka 19), his mother couldn’t work because she suffered from asthma, and he considered his sister a seventeen-year-old child whose life consisted of dressing herself nicely, sleeping in late, helping around the house, taking part in a few modest enjoyments and, above all, playing the violin (Kafka 20). While the members of his family sit around at home all day, Gregor is the sole provider of the family and the only one who’s working. This is a factor as to why Gregor feels so apart from his family. Gregor’s job made his life miserable. When he wakes up in chapter one, he’s not concerned at the fact that he’s an insect but at the fact that he will be late for work. As he tries to prepare himself, he thinks about how much he hates his job. O God, what a demanding job I’ve chosen! Day in, day out on the road. The stresses of trade are much greater than the work going on at head office, and, in addition to that, I have to deal with the problems of traveling, the worries about train connections, irregular bad food, temporary and constantly changing human relationships which never come from the heart. To hell with it all! (Kafka 1). He finds no enjoyment in the working industry. He is lonely and feels by himself & those feelings remain the same even when he returns home from work. With Gregor’s transformation, the family realized how less of a help he was and how they wouldn’t be able to survive if they relied on him. Towards the end of the story, Gregor’s family wants to get rid of him because they believe that their lives would be better without him. Grete shows this feeling when talking to her parents by saying, We must try to get rid of it…it is killing you both. I see it coming (Kafka 36). Grete, the only one who actually cared for Gregor and his well-being, insisted that Gregor was no longer part of the family and thought that he was contributing to the disintegration of their family, which is why she felt he had to be eliminated. After hearing this, Gregor locks himself in his room, which demonstrates how emotionally alienated and worthless he feels. Due to these feelings, Gregor eventually dies. Even after his hearing about his son’s death, Gregor’s father states, now we can give thanks to God (Kafka 39). This shows how relieved his family was towards his unfortunate demise. It provides evidence on how alientated his family was and the effects of it. It is clear to see that The Metamorphosis is not only about the change of Gregor into the bug, but also about how the lives of his family change because of it. Gregor showed much care for his family, despite the lack of care back, and even in his dying moments he remembered his family with deep feeling and love (Kafka 38). Due to the alienation, Gregor died willingly without much change in the character that he is.

The Metamorphosis by Franz Kafka is a prime example of how one. (2019, Aug 20). Retrieved from http://studymoose.com/the-metamorphosis-by-franz-kafka-is-a-prime-example-of-how-one-essay 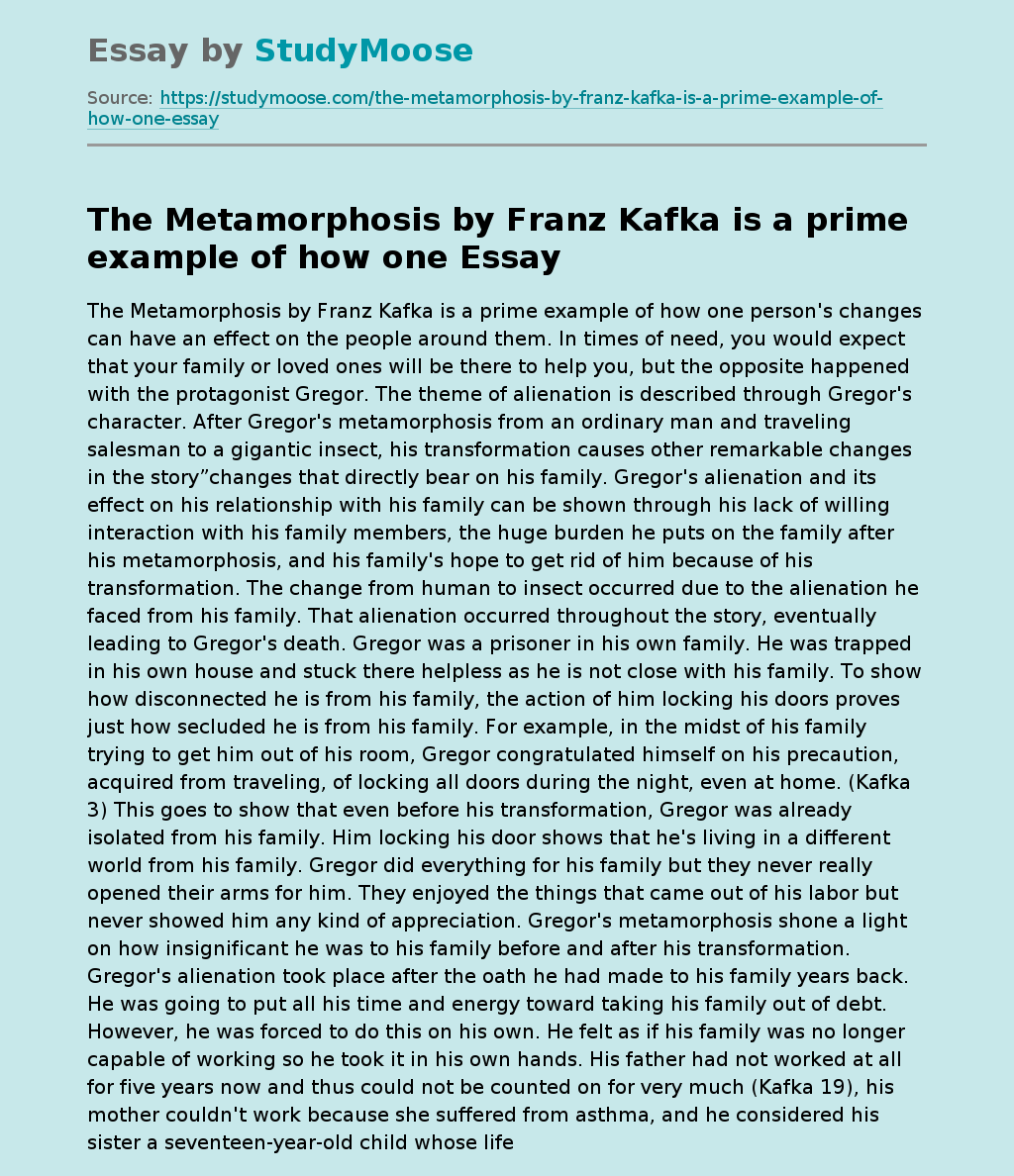