"The Metamorphosis" by Franz Kafka: Origins and Parallels

Throughout the novel, The Metamorphosis, Franz Kafka, the author, demonstrates the parallel between his relationship with his family, and Gregor Samsa’s relationship with his family, in addition to how Gregor came to chose to become the insect he was physically, after having already been one psychologically. Following the existentialist theory, Gregor allowed himself to become an insect, as he chose how he would let his family affect him. Ultimately, it was he that made the choice to become accustomed to the routine of his daily life, to shell himself from all intimacies, and to become wholly focused on his job, despite the fact that he despised it.

Don't use plagiarized sources. Get your custom essay on
“ “The Metamorphosis” by Franz Kafka: Origins and Parallels ”
Get custom paper
NEW! smart matching with writer

Gregor Samsa was in full control of his own life, as he allowed his family to affect him, just like Kafka’s had, as well as consenting to become an insect.

Proficient in: Notes From Underground

Franz Kafka’s father, Hermann Kafka, was thoroughly disappointed with his son, as he never reached the high expectations he had set for him. This affected Franz Kafka in such a manner that he attributed his failure to live – cut loose from parental ties and establish himself in marriage and fatherhood – as well as his escape into the literary world, to the father figure. Franz Kafka himself was an introverted, shy, and quiet man, that deep inside anguished and cried for help as he sought information and understanding from the world, and for a way to believe in his own identity.

This had an intense ramification on Gregor, the protagonist of Kafka’s novel.

The corollary of Kafka’s relationship with his father was portrayed on Gregor and his relationship with his father. Kafka intended to reflect the conscious decision and choice made by Gregor Samsa of being influenced by his family, by making them the next most important characters in the novel. Gregor knew right away, “from the first day of his new life that his father considered only the strictest treatment called for in dealing with him” (p. 38), much like Kafka’s father had. His father was rather tough on him, and would take no logical steps in understanding what Gregor, as a bug, did or tried to say through his actions. He would jump to conclusions the moment he saw Gregor out of his room, and start beating him with a cane attempting to lead him back to his room, or throw apples at him. This provokes Gregor to pull his self in, becoming more introverted, yet deep inside suffering with such anguish and crying desperately for understanding, much like Kafka had. This, however, was only part of what made Gregor into an insect, as his father drew out his humanity by treating him as a “monstrous vermin”.

Nevertheless, Gregor Samsa made the choice of making his family important enough for him to be influenced by them as he attempted to receive their affection and approval by working hard in his miserable job, to pay off their debt. Regardless of the horrible job Gregor had, it had become a monotonous routine, part of his daily life; and he exerted a lot of effort in it, in spite of “the torture of travelling, worrying about changing trains, eating miserable food at all hours, constantly seeing new faces, no relationship that last or get more intimate” (p. 4). He endeavoured himself to pay off the family debt, despite the fact that he deplored his job, and would have quit in a matter of seconds. Or as Gregor put it so eloquently, “If I didn’t hold back for my parents’ sake, I would have quit long ago (…)” (p. 4).

This only confirms and reveals that he worked with such vigour to help his family. Nonetheless, his struggle to receive his family’s love and affection was in vain, as he received nothing in return as he, when human, focused primarily on his job and his privacy, shutting himself out from his family. His family constantly took him for granted, as they never worked outside of the house, or even so much as thanked him for all his hard work, or paid him any respect whatsoever. All these factors demonstrate how he psychologically became a bug as he allowed his family to influence him by taking him for granted, as he worked genuinely hard for them, becoming as insignificant as the bug he came to be physically.

All the same, towards the end of the novel, he realized that he “was a member of the family, in spite of his present pathetic and repulsive shape, who could not be treated as an enemy; that, on the contrary, it was the commandment of family duty to swallow their disgust and endure him, endure him and nothing more” (p. 40). It was only then that he truly realized that he was merely being used for financial gain. The more serious his family became about their jobs, the less they paid attention to Gregor, as they began to exclude him from the family, until Grete finally comes to the conclusion that they should “get rid of him”.

All these factors that caused him to become a bug, had ultimately been his choice, as it was he that decided to make his family a priority, allowing them to influence him to become an insect. Kafka intentionally made it clear that it was Gregor’s choice to become an insect, and no one else’s. He had made the decision to work so hard to support his family, to protect himself from any intimacies, and to do so much and receive nothing in return. These characteristics he held of an insect could only be his with his consent, as he permitted his family, into moulding him into a creature that was no longer human.

"The Metamorphosis" by Franz Kafka: Origins and Parallels. (2016, Jun 21). Retrieved from http://studymoose.com/the-metamorphosis-by-franz-kafka-origins-and-parallels-essay 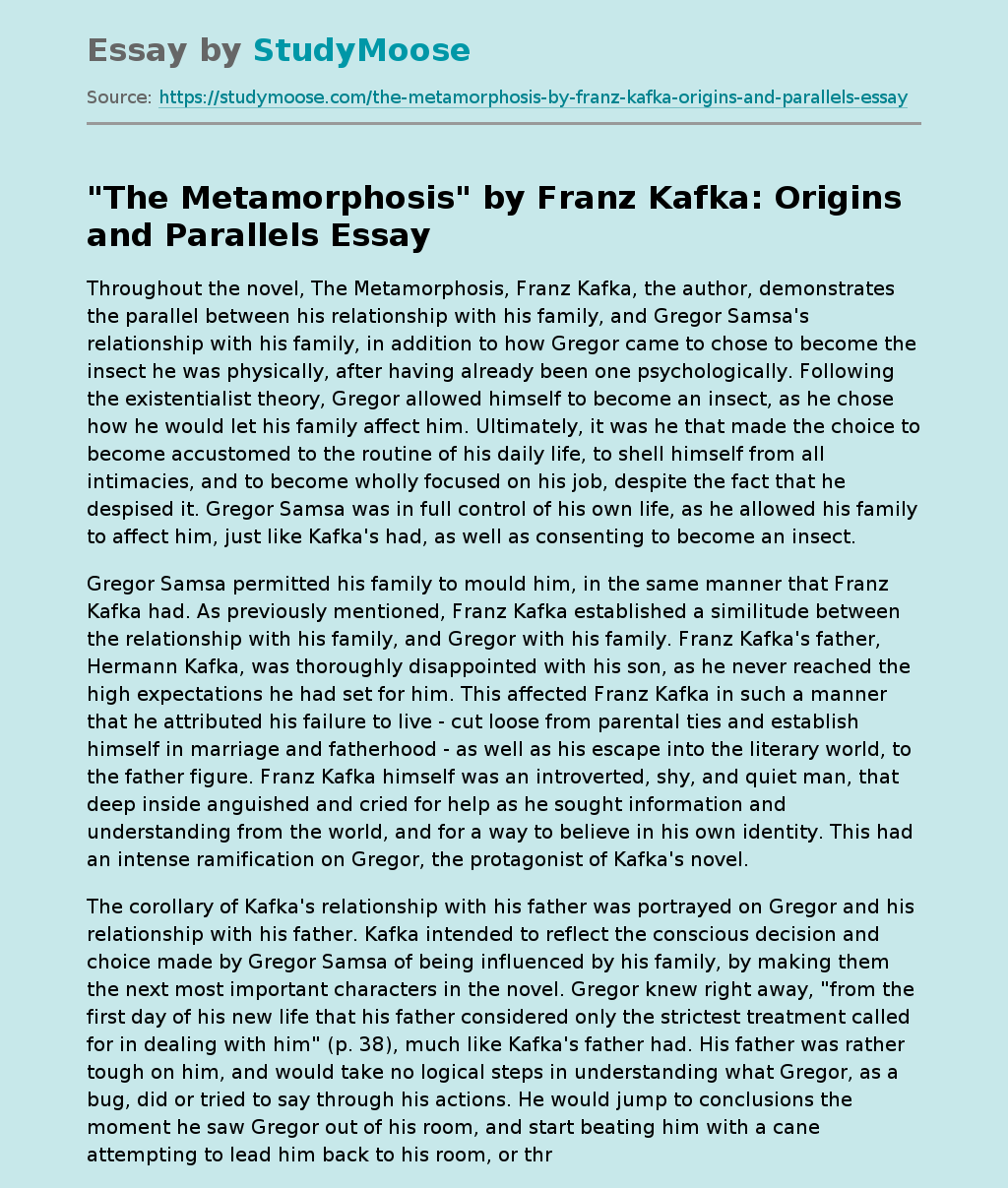