The Metamorphosis: Franz Kafka - An exmaple of Magic Realism

The Metamorphosis, written by Franz Kafka is a prime example of magic realism. Magic realism is a fictional technique that combines fantasy with raw, physical or social reality in a search for truth beyond that available from the surface of everyday life. Also, reality becomes deformed and it is difficult for the reader to perceive the essential truths and tell the difference between what is real and what is unreal.

The story, “The Metamorphosis” is about Gregor, a workaholic, who is changed into an insect and must deal with his present reality.

Don't use plagiarized sources. Get your custom essay on
“ The Metamorphosis: Franz Kafka – An exmaple of Magic Realism ”
Get custom paper
NEW! smart matching with writer

The hardest part of being an insect for him was the estrangement from his family, which eventually led to his death. In reading this story, the difference between Magical Realism and Fantastic is very small. The magical elements in this story are obvious, as they should be in fantastic literature. It is not often that humans are turned into insects. Another magical element that is not as clear is the unconditional love that Gregor had for his parents and sister after they had treated him so badly and forgotten all about him.

In this fantastic story, the author Franz Kafka uses the metamorphosis to depict how he sees society. Throughout the story, he makes one see society through Gregor’s eyes. Kafka portrays society as being changeable and narrow-minded. The purpose in this story, like all fantastic stories, is told at a deeper level. The purpose of “The Metamorphosis” is to show how people gradually change over time. Gregor, due to his situation with work and family, was slowly changing into a monster and he did not even know it.

People do change over time due to the circumstances of their life. Change can either come gradually, as it did in Gregor’s case, until one morning that someone wakes up realizing who he or she is. After someone accepts what he has become, then he and his family must deal with it. The rest of the story depicts one’s life after this turning point.

Like in all fantastic literature, the relationship between the magical element and the rest of the world causes a huge problem. The world turns on Gregor completely. The family was completely dependent on Gregor before the metamorphosis, and now Mr. Samsa has a job as a bank guard, Mrs. Samsa sews underwear, and Grete is a saleslady and the family wants nothing to do with Gregor. They turned on him when he needed them the most. This feeling of worthlessness kills him.

Trying to distinguish between fantasy and Magical Realism is difficult. This story is right on the borderline between the two and is often debated over. Magical Realism is the consideration of a man surrounded by realistic facts. The characters always accept non-reality as being normal, the author offers no explanations of the events, and the story is reality based. It is a different way of viewing something. Magical Realism has implications of fantasy but is not unbelievable. Franz Kafka’s short story “The Metamorphosis” is the perfect example.

The Metamorphosis: Franz Kafka - An exmaple of Magic Realism. (2016, Jul 16). Retrieved from https://studymoose.com/the-metamorphosis-franz-kafka-an-exmaple-of-magic-realism-essay 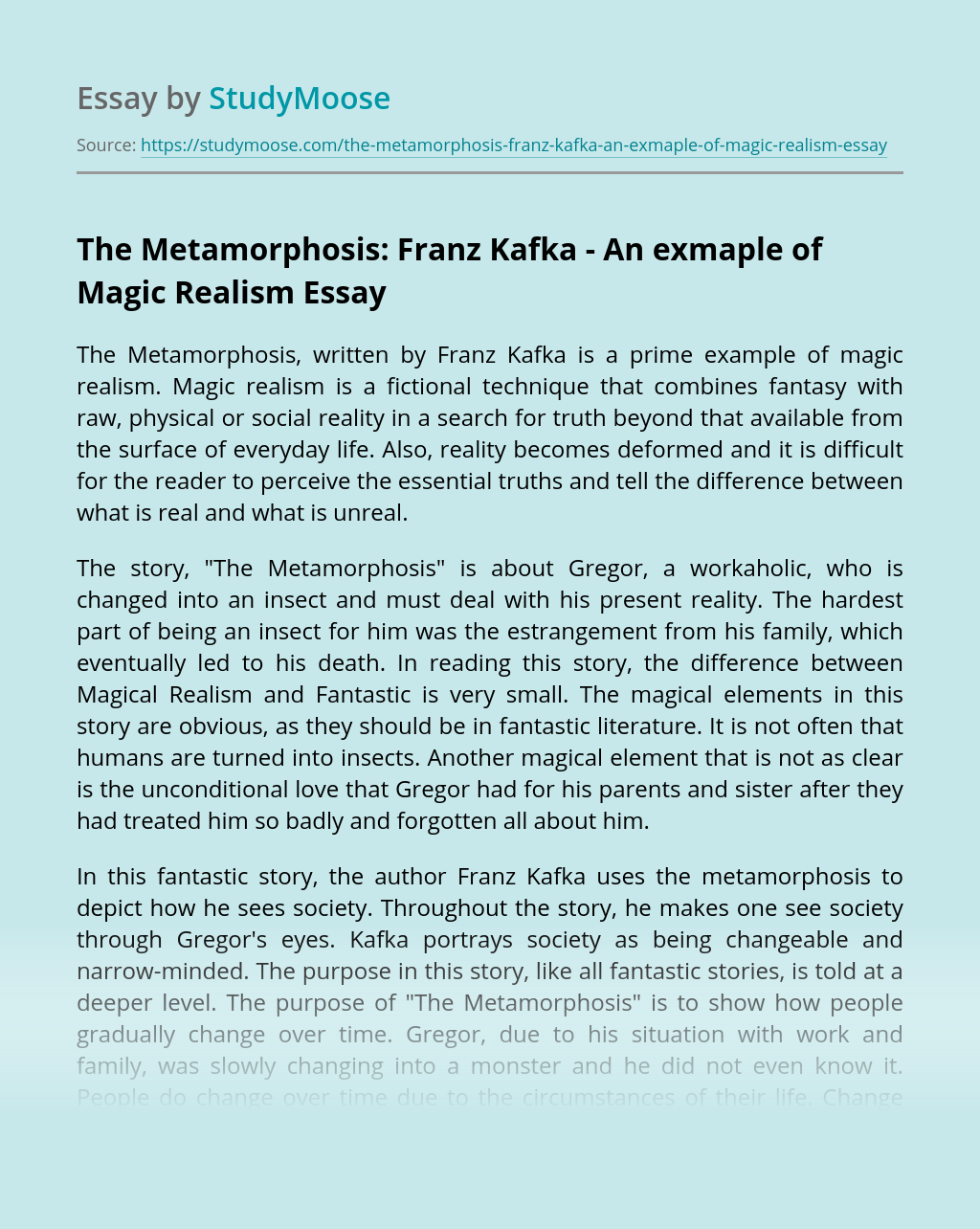