“Hunters in the Snow” Written by Tobias Wolff

In “Hunters in the Snow” by Tobias Wolff, we see three characters who apparently appear to be close friends but then as the story moves they lose their patience with each other. In the story, the reader notices how the cold temperatures started to create an impact on each of the characters. It brings out the complexities in their character. In due course of time the reader comes across the true self of the characters.

Their simmering resentment towards each other is aptly highlighted by the author amidst the appropriate setting of the cold bleak winter season.

Turn in your highest-quality paper
Get a qualified writer to help you with
“ “Hunters in the Snow” Written by Tobias Wolff ”
Get high-quality paper
NEW! AI matching with writer

When concentrating on the conversation that takes place between the men the reader realizes that underneath all the friendship there is a cruelness of words that cuts to the deep as the men flaunt the others weaknesses and seem to be ignorant of the effect that the words will have on the emotional state of the other.

The atmosphere plays a very crucial role in defining the theme for a story.

When used to its full potential it can stir deep feelings in the reader that go beyond rational thought. Tobias Wolff in his short story ”Hunters in the Snow” uses this factor to create atmosphere and a sense of crisis. The story craftly uses the setting and thereby makes it a fascinating study in self-absorption. Wolff draws three strongly distinct characters in a small space, and again manages to convey the ambiguities and complexities of human interaction and personal struggle.

The story begins with Tub waiting for his friends Frank and Kenny “for an hour in the falling snow.

” In the same paragraph we find Tub is walking down the street, carrying a rifle and seemingly, shooting the breeze. The cold and the waiting surely creates an impact in the mood of the character. Tub is restless from the wait and the cold adds on to it. Besides, aiming at the breeze fairly depicts that the character continues to be impatient and will later ironically reflect the true nature of Tub.

The snow let up, but still there was no edge to the land where it met the sky. Nothing moved in the chalky fields. The cold bleached their faces and made the stubble stand out on their cheeks and along their upper lips. They stopped twice for coffee before they got to the woods where Kenny wanted to hunt.  Wolff builds up the story on the platform of cold weather and the impact of the cold on each character slowly builds up.

As they ride together in Kenny’s truck, we learn more about them. They are traveling in an old truck with a hole in the windshield, making it a very cold journey.  Once again the cold seems to follow them throughout the journey. On the trip into the woods, and while they are walking around searching for tracks, we realize the fact that Kenny and Frank don’t seem to like Tub very much. Not only that, they seems to exclude him from walking with them in the forest, they make fun of him about his eating habits and even try driving off without him. Tub, had an overweight problem and because of the cold temperatures and the snow he couldn’t keep up easily with his friends. “When Tub crossed the last fence into the toad the truck started moving.

Tub had to run for it and just managed to grab hold of the tailgate and hoist himself into the bed. He lay there, panting. Kenny looked out the rear window and grinned.” Kenny kept taunting Tub about his weight all the while. Even though he appeared to be the most sensitive guy in the group, the reader sees a changed character in him at the end. It is probable that Kenny tortured Tub to an intolerable point and that Kenny’s joke backfired. It is through misunderstanding that Tub shoots Kenny.

The difficulty that he was going through walking in the cold weather and troubled with himself bothered him enough and made him more and more impatient with time. Apparently we find the nice guy ending up shooting his friend Kenny. This reaction wasn’t expected from him but the reader can feel the frustration that this character has in his life and how the need of keeping warm made him leave his friend behind.

Later in the story, Tub finally reveals to Frank the truth about his gluttony. Tub admits, “I’ve even got stuff (snacks)… He who is “self conscious about his weight and in denial about his gluttony” apparently ends up in a confession while he tries to keep himself warm during their journey towards the hospital.

Frank, on the other hand, seems much more mature and emotionally stable then Tub, while also seems to be the parent figure of the group. He “doesn’t care about his wife, and is in denial about his lust.” Frank was troubled with his family. He liked a fifteen year old girl who was his babysitter. The freezing temperature and his confused thoughts kept running through his head all the while. This prevented him from thinking rationally and therefore it did not bother him after Kenny was shot and lay freezing to death in the back of the truck. His selfishness was so obvious when kept talking only about himself.

This reached its limit when he tried to keep himself warm and thereby ended up taking Kenny’s blankets and let him back there without any regret. He seemed to be the toughest one among them but when Tub couldn’t take him anymore and confronted him he backed up and showed otherwise. In the beginning, he seems like a simple guy. He just basically does whatever Kenny demands of him, and seems to be the calm, undemanding one of the trio. He tells Kenny and Tub to stop obsessing over the hunting: “‘Relax,’ Frank said. ‘You can’t hurry nature. If we’re meant to get that deer, we’ll get it. If we’re not, we won’t.’” (142).

However, later in the story, the plot of the story begins to prove that Frank is not so innocent. He follows whoever has the most power at the moment. After the “power shift” from Kenny to Tub, Frank beings to follow Tub’s lead. He seems to not even care that his previous best friend is dying in the back of the truck…The hunting grounds and the cold weather makes them invariably confide in each other secrets about their personal lives, and enjoy each other’s company immensely. As the story continues, Tub and Frank become more interested in patching up their differences and less concerned with Kenny, to an extent that becomes strange.

Kenny, appears to be the comic character of the bunch, and is always in a kind of light-hearted mood, joking around, even while shooting the dog. He “doesn’t care about anyone or anything.” Kenny appears to be going crazy in due course of time. With all playfulness he keeps saying “I hate that tree,” and shoots a tree. Next, he approaches the farmer’s dog, and says, “I hate that dog,” and shoots the dog. Finally, he approaches Tubs and says, “I hate you Tubs.”  And this was when he was shot in his stomach by Tubs.  This reaction of Kenny’s shows his sheer desperation to an unsuccessful hunting trip. Frank and Tub even lie to Kenny at the end, letting him believe that he is being taken to the hospital even though they had no intentions of doing so.

Kenny in the story bears the impact of cold to the maximum. He is left at the back in cold for a long time since Frank and Tubs were busy taking breaks to warm themselves up. His blankets are taken away to keep others warm. The story ends in a highly un- dramatic way, with Tub and Frank changing paths away from the hospital, and Kenny freezing in the truck bed, thinking he’s on his way to safety.

The freezing weather made these characters act erratically in the story. With Frank and Tub being in denial of what is happening, they neglected Kenny to the point of his death. Kenny lay at the back of the truck while Tub and Frank pull off to the side of the road three separate times, once for coffee, once to warm their hands from the frigid cold and a third time so Tub could hoard some pancakes because Frank felt pity for his seemingly unchangeable diet. These stops are increasingly random and seem completely inappropriate seeing that there is a man possibly dying in the back of the truck.

This inconsiderate attitude of the three men who apparently called themselves as friends and the effect of their words targeted at each others weak points makes for a rather perverse realization that under these men’s simple appearances lies a cruel complexity of human nature, which is as frigid as the snow on the ground.” The reader realizes how all their internal problems plus the weather got into them and showed unexpected reactions from a group of friends that went on a trip. Wolff has taken an ordinary setting and environment of the woods and the snow,  and turned it into an extraordinary event for the three men participating in it.

Literary critic, Karen Bernardo mentions, that the different turn the three friends have taken is away from being human beings, and towards being no better then animals.”

Bernardo, Karen. Tobias Wolff’s “Hunters in the Snow”. Storybites: A Taste of the World’s Best Short Stories. May 21, 2003.

“Hunters in the Snow” Written by Tobias Wolff. (2017, Apr 04). Retrieved from https://studymoose.com/hunters-in-the-snow-written-by-tobias-wolff-essay 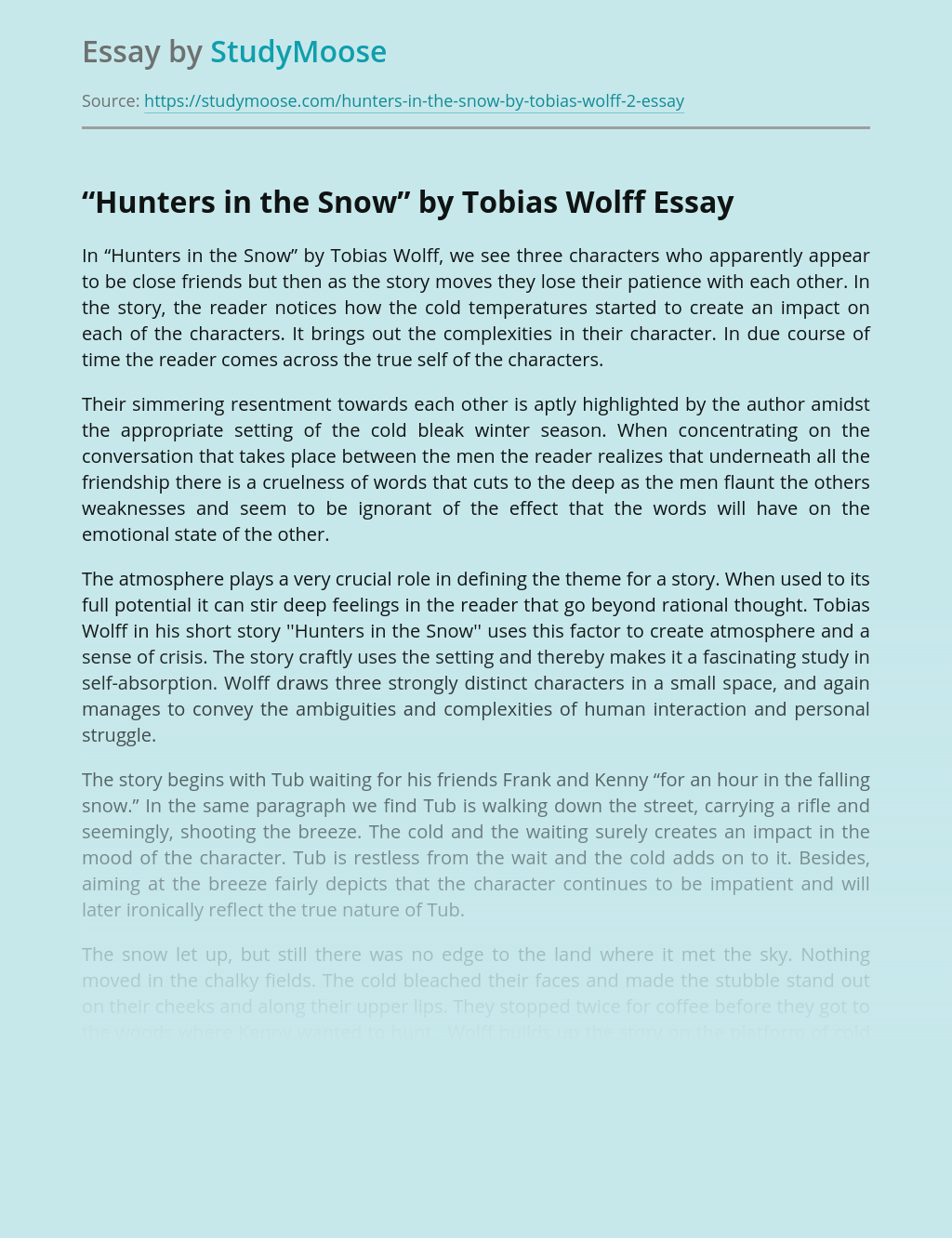 Turn in your highest-quality paper
Get a qualified writer to help you with
“ “Hunters in the Snow” Written by Tobias Wolff ”
Get high-quality paper
Helping students since 2015
Stay Safe, Stay Original