Bullet in the Brain by Tobias Wolff

“Bullet in the Brain” is a short story written by Tobias Wolff. The story is about a book critic named Anders, while waiting in a long line at the bank he is the victim of an armed robbery and gets shot and killed. The story is divided in to two parts, and this division allows the reader to see a contrast between two parts of main character’s personality. I want to argue in this essay that the combination of Anders love of words and negative past experiences are what led to his death, and demonstrate the contrast of Anders wisdom when he was younger ,and innocence when he was older, as a consequence of that combination.

Don't use plagiarized sources. Get your custom essay on
“ Bullet in the Brain by Tobias Wolff ”
Get custom paper
NEW! smart matching with writer

In the first part of the story when Anders is waiting in line, he’s witness to an armed robbery and he is sarcastic and cynical until he got shot in the head. In the second part the bullet inside Anders brain slows down time to let the reader witness the negative past experience that made him such a cynical sarcastic and childish person that he was when he got shot.

I will start from the second part of the plot when he got shot. In this part of the story we see more sides to Anders character. We have a short summary of Anders past experience in life that made him so cynical and sarcastic like he is to the point he got shot.

The highlight of the second part is that the writer made a list of memories that Anders would not remember, the readers, have a better perspective to Anders personality: “He did not remember his first lover, Sherry, or what he had most madly loved about her, before it came to irritate him-her unembarrassed carnality, and especially the cordial way she had with his unit, which she called Mr.

Mole As in ‘Uh-oh, looks like Mr. Mole wants to play”.

This is an example of Anders personality when he loves a woman and adores her choice of words of how she called he’s genital and gets him irritated after a while. Anders did not remembered his wife whom he had also loved before she exhausted him with her predictability”. Another example of someone he loved that he got tired of. “ Anders did not remembered his dying mother saying of his father ‘I should have stabbed him in his sleep”. Another example of a negative experiences that accrued Anders that left a mark and vanished his innocent and made him bitter. The highlight of this part of the plot is a memory of a much earlier moment in his life that shows a contrast to the cynical, sarcastic character whose comments cost his life.

As a boy, Anders accepted and admired the musical qualities of someone’s faulty grammar and had the wisdom not to ask the Coyle’s cousin to repeat his words that the other kids wont think him as a jerk, but as an adult Anders seems only to find these flaws as a kind of noise and had no wisdom to keep he’s mouth shut as expected from him. Here, we see a memory evoked at the moment of impact. “Some one asks the cousin what position he wasn’t to play. ‘Shortstop’. The boy says, “shortstop the best position they is”. Anders turns and look at him.

He wants to hear Coyle’s cousin repeat what he’s just said, thought he knows better than to ask. the others will think that he is a jerk, ragging the kid for his grammar. But that isn’t it, Anders is strangely roused, elated by those final two words. Their pure unexpectedness, and their music. He takes the field in a trance, repeating them to himself. ” Here we see what Anders is actually enthusiastic about, and likes the words for their music, even though they are grammatically wrong, as he repeats them to himself it puts him into a trance in the field.

Here he celebrates the simple unexpected usage of words that sounds beautiful to his ear. In the first part the reader gets to know Anders the book critic, His known for the “weary, elegant, savagery with which he dispatched almost everything he reviewed. ” he’s character is very cynical, sarcastic and arrogant. Through out the story Anders was sarcastic, cynical and criticizing everything, that was the cause of his death. In the beginning when he is waiting in line, in the bank, one of the tellers closes her position, Anders was listing to the woman in front of him complaining: “Oh that’s nice.

One of them said, she turned to Anders and added, confident of his accord, “one of those little human touches that keep us coming back for more”. Anders had convinced his own towering hatred of the teller, but he immediately turned it on the presumptuous crybaby in front of him. ”Damned unfair” he said “tragic really if they are not chopping off the wrong leg or bombing your ancestral village they closing their position. She stood her ground. “I didn’t say it was tragic,” she said “I just think it’s a pretty lousy way to treat your customers”. “Unforgivable” Anders said. “Heaven will take note”.

Even though that Anders was upset from the position closing, he took his anger out on the lady in front of him by being sarcastic, cynical and arrogant. It’s ironic that Anders said “Heaven take note” and in the end he is the one that got shot. We witness how the love of words get Anders to react in a careless way: “ Keep your big mouth shut! ” the man with the pistol said, thought no one had spoken a word. “One of you tellers hit the alarm, you’re all dead meat”. “Oh, bravo” Anders said, “’Dead meat’”.

He turned to the woman in front of him. ” Great script, eh? The stern, brass-knuckled poetry of the dangerous classes. Anders critic of the robber’s choice of words makes him act in away if like he is the audience of a bad play and shares he’s critic with the ladies a front of him. Anders mocks the robbers and feels superior to them by saying: ”The stern, brass-knuckled poetry of the dangerous classes. ”. This is evidence that proof how passion Anders is for words and is not aware of any danger that might happen. When the robbers addresses Anders:”’ hey! Bright boy! Did I tell you to talk? ’ “No”, Anders said. “Then shut your trap”. “Did you hear that? ” Anders said. “’ Bright boy’. Right out of the killers”.

Anders is mocking the robbers choice of words, instead of be quiet like an adult should behave in this kind of situation, but he is behaving childishly and risk himself and the people that are next to him. Anders got the robbers attention and they made him look up the ceiling, he couldn’t help it, even when the robbers are pointing a gun to him and warned him a few time Anders started to laugh at the robbers face and got shot. : “ ‘What’s so funny, bright boy? ’ ‘Nothing’. ‘You think I’m comical? You think m some kind of a clown? ’ ‘No’. ‘Fuck with me again, your history, capiche? ’

Anders burst out laughing. Covered his mouth with both of his hands and said, “ I’m sorry, I’m sorry” than snorted helplessly through his fingers and said: “Capiche-oh, God , capiche. ” And at that the man with the pistol raised the pistol and shot Anders right in the head”. This moment in the plot emphasize my argument, Anders love of words with his negative past experience is what led him to his death in the bank and he couldn’t help him self to get out of it. If this situation happen when Anders was a child he probably wouldn’t say a word to the robbers, but as an adult he couldn’t act wise and shut up.

Bullet in the Brain by Tobias Wolff. (2016, Sep 09). Retrieved from http://studymoose.com/bullet-in-the-brain-by-tobias-wolff-essay 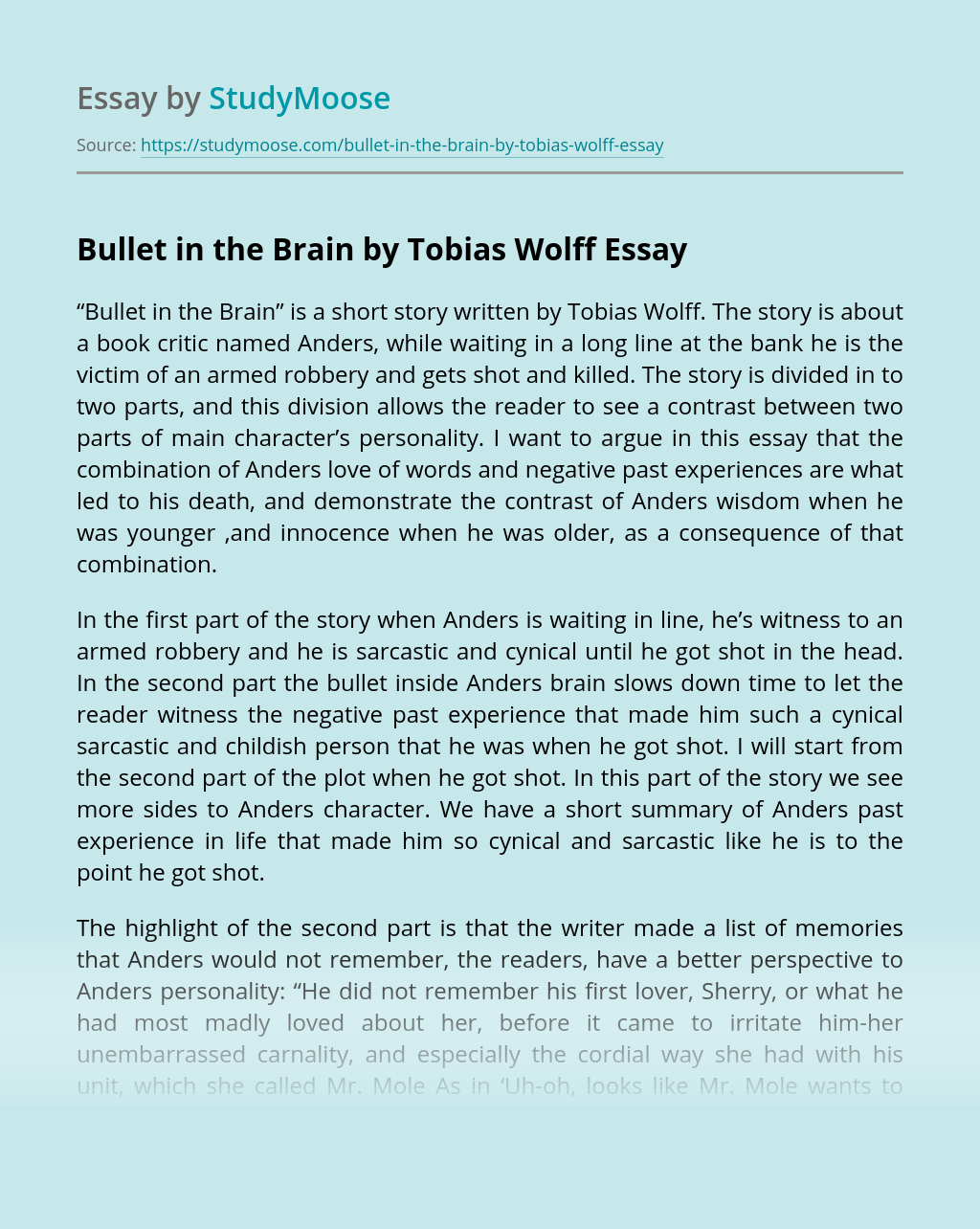