The relationship between a father and a son is complex. Despite the undeniable bond between them as both men, there comes a time when one grows more distant from the other and both grows apart despite the fact that they are growing more and more alike each other. In the succinct and evocative short story by Tobias Wolff entitled “Powder,” Wolff explores this tenuous relationship to tell the story of how a distant relationship between one reckless father and his conscientious son is breached as the son, in retrospect, makes sense of his father’s misunderstood character.

Don't use plagiarized sources. Get your custom essay on
“ Risky Moments: An analysis of Tobias Wolff’s “Powder” ”
Get custom paper
NEW! smart matching with writer

The story is told in the perspective of a narrator much older than he was in the actual narrative. He begins with a telling description of his father, setting the motion of the story and revealing a risky, reckless man who sneaks his son out of the house to watch a jazz player in some local bar. His father, he says, is taking him to a ski trip and has pleaded for her mother’s approval, vowing to return before Christmas dinner.

However, his father gets caught up in the thrill of the skis and decides to hit the road later than when they are supposed to.

While on the road, a trooper stops and informs them of a road block brought by an unexpected snow storm. The father retreats, but hatches a plan to get his son home on time and save himself from an unforgivable offense. Sneaking behind the state trooper, both father and son cross the road block, driving through the snow storm in what could have been a catastrophe waiting to happen.

The father assures his son, however, that there is no cause for fear because he is, by virtue of fact, a great driver.

But he warns him never to do what he did. This conversation leads to the son’s realization the he has to trust his father’s recklessness because it is his father’s big risks which brings him to the best ride of his life. The opening of the story says much about the character of the father. It important in the narrative to give focus on the father’s reckless and seemingly irresponsible attitude because this character of his is what causes the rift which his son, the narrator, feels to be drawing him apart from his father.

Through the clarity and economy of Wolff’s powerful description, we see the father to be the kind of man that has never grown up, a man perpetually young and bold, unafraid of nonconformity and, as the son puts it, “flushed with certainty” (Wolff, 3). The son does not disclose anything detailed about the status of his parent’s marriage, but from the opening paragraph alone, we can tell that the father’s carefree attitude conflicts with the mother. Since the story is told in retrospect, we are told that the marriage eventually falls apart and perhaps the father’s attitude played a huge part in its disintegration.

Despite the shortcomings of the father, he does not neglect his son’s needs. In fact, he “fights for the privilege of [his son’s] company” (Wolff, 1), pleading to his distrustful wife that he would be responsible enough to bring their son back in time for dinner. Wolff uses the word privilege to describe both the father’s bold, impulsive, even dramatic character (as it is assumed to be spoken by the father) and his deep longing for his son. True to his character, the father fails to fulfill his promise, taken over by his childish excitement over skiing.

As he worries over the consequences of his action and seeks assurance that his son wants him back, we see a character torn between his impulses and his desire to be a responsible father. He tells his son, “I can’t let that happen…I’ll tell you what I want. I want us all to be together again. Is that what you want? ” (Woff, 1). There is doubt whether the father can ever be the responsible father his wife wishes him to be, but there is absolutely no question about the depth of his love for his son.

This love is manifested towards the end of the story as the father races through the snow-laden terrain just to get themselves back home. The son does not understand his father’s behavior at first and as a result, he could not accept it as much as his mother. Used to his recklessness, the son doubts his father’s decisions. When his father insists on going through another run in the snow, we hear a tone of irritation and fear in his narration as he tells how his father ignores his misgivings about doing another run in midst of a snowfall.

The narrator complains that his father “[…] was indifferent to [his] fretting” (Wolff, 1). The son is unlike the father. He is careful and “thinks ahead” as his father puts it (Wolff, 3). He tells of his queer habit of keeping clothes in numbered hangers to make sure he does not repeat a shirt. He admits that he pesters his teachers about their homework way ahead the schedule. As his father races through the fleet of blinding snow, he confesses that he thinks his father’s efforts are useless because he is certain that at the end of the road, a trooper would definitely stop them.

Their clashing behavior creates the rift between them. The son seems to be asking his father to be more conscientious, responsible, and fatherly, in the traditional sense of that role. On the other hand, the father, by taking bold risks, is teaching his son how to be reckless and carefree. Though the story is mute about the age of the narrator, it may be said that he is, at the moment of the incident, at a point in his life in which he is more judicious and discriminating about what behaviors are acceptable. Because he mistrusts and misunderstands his father, he does not accept his father’s risky business.

However, the son could not be blamed for negatively taking his father’s behavior because it can be assumed that he is aware how this behavior is shaking up their family. Throughout the story, we hear the voice of the narrator as if an impending disaster is about to happen. He describes the blind road and how he “faced forward and had a shock [because] there were no tracks ahead of [them]” (Wolff, 2). His misgivings and fettering reflect the overall mistrust he has for his father—a mistrust caused by what he observes about their family situation.

He tells his father that he does want them all to get back together (Wolff, 3), and perhaps his irritation and fret and is an expression of his desire for that reunion to actually happen. He believes this little delay will ruin the opportunity to get back his father. The plot of the story is thin in a sense that it all happens in one day. Wolff is able to put in that moment a transformation and realization that changes the whole perspective of the son about his father. When the son describes the father at the beginning of the story, we see nothing admirable about the man.

He acts irresponsibly which often puts him in trouble, dragging along the people who are with him. The son gives up trying to reason with his father, and he ends up “[sticking] to him like a white on rice” (Wolff, 1). However, as his father pushes through the snow, the son realizes that his father will get them out of that road and safely back home, just like how his father has lead him along the ski slopes without “sailing off a cliff” (Wolff, 1). At this point, he begins to trust his father and gradually accept him for who he is.

He says at the end, that his father is far from perfect—he is “rumpled, kind, bankrupt of honor, and flushed with certainty (Wolff, 3). But despite this, his father manages to teach him a valuable lesson in life: that risks are a part of life. The son says that “if you haven’t driven fresh powder, you haven’t driven” (Wolff, 3). This realization enables the son to breach the gap between him and his father. Through Wolff’s keen eye for character and adept crafting of the plot, the theme of a healed relationship between a father and a son is poignantly dramatized in “Powder.

” Wolff understands that this kind of relationship is one fraught with misunderstandings, distance and conflict. But there are moments in life which can lift all these burdens off this relationship, moments that transforms and sheds a whole new light to things that have become so familiar. Work Cited Wolff, Tobias. “Powder. ” Preparing for the English Exit Exam. 2007. Centre Collegial De Developpement De Materiel Didactique. 12 February 2009. <http://www. ccdmd. qc. ca/media/ss_rel_texts_EEE_Powder. pdf> 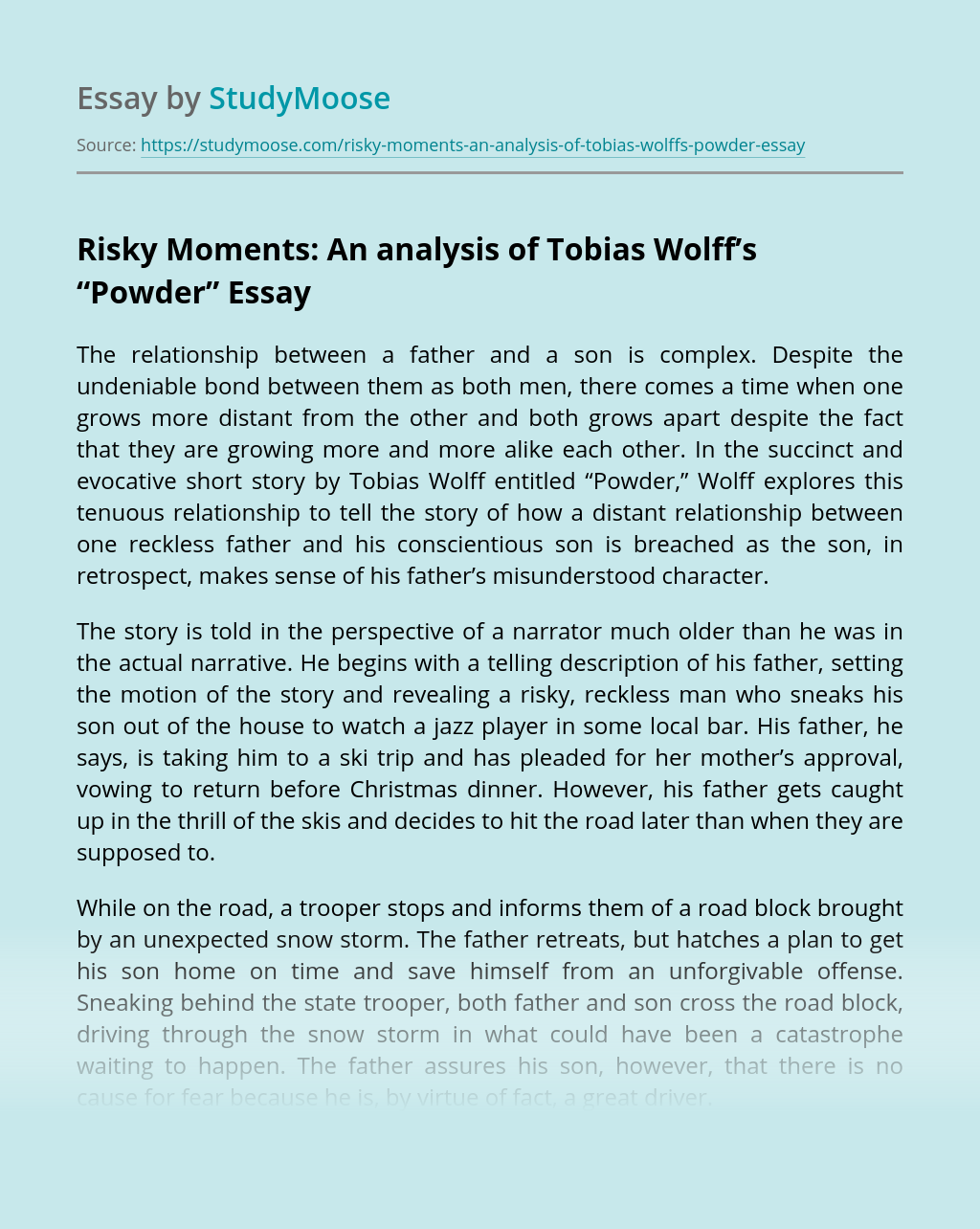