One of the most renowned American writers, Tobias Wolff is known mainly for his work on the memoir, and short stories. He was part of a new wave of writers, including Andre Dubus and Raymond Carver, who ushered in a novel style of fiction writing, which is all at once real yet incredible, grounded yet detached, but always engaging. Wolff wrote his short story “Powder” as part of his 1996 collection entitled The Night In Question. There are only two major characters in the story—the teenaged narrator and his father, and everything takes place within the area of Mount Baker, a skiing resort.

Don't use plagiarized sources. Get your custom essay on
“ A Short Story Powder by Tobias Wolff ”
Get custom paper
NEW! smart matching with writer

The fact that the boy’s parents were on the verge of divorce is established early on, and some of the implied reasons lie in the father’s character. Three descriptions were used in the first few paragraphs of the story that alluded to the father—“he had to fight for the privilege”, “he wouldn’t give up”, and “he was indifferent to my fretting”.

These three descriptive phrases convey a picture of a man with an aggressive nature, and would always pursue what he wants; this is proven by his keeping the flashy Austin-Healey, by insisting on taking his son to a club, and by being focused on bringing him home—so as not to get his wife’s ire, for he believes they would still be able to patch things up. At the end of the story, it is the son himself who uses several adjectives on his father—“rumpled, kind, bankrupt of honor, flushed with certainty.

He was a great driver. All persuasion, nor coercion.” After reading the story in its entirety, one would be able to associate the seemingly carefree and spontaneous characterization of the father to his being a man of gentle manner, yet gregarious tone; what his son lacked in youthfulness and spirit, he completely made up for.

The methods of character development, as applied to the story, further examines the contrasting personalities of father and son: Narrative summary without judgment. While the father is almost explicitly judged through specific mentions of behavior and mindsets, the son, being the narrator, only reveals his true character of being methodical and systematic at the end of the story. The reader will only assume him to be a young boy easily influenced by his father. Narrative description with implied or explicit judgment. Exactly the way the father is discussed, as mentioned previously. Surface details of dress and appearance.

For the father, the main points would be his Austin-Healey, and his son’s mention of his being rumpled, kind, and forty-eight years old. The son is later described, through his system with his clothes hangers, as being forward-thinking and methodical, and not exactly one who would take risks. Character’s actions—what they do. The father is eager, spontaneous, and has no regard for rules, except when already in dire straits. Character’s speech—what they say.

Using words like “Vamanos”, and “Buck up” shows the casual personality of the father, and the boy’s prim manner and speech validates his guarded nature. While the father’s character seems to be the more “explored” of the two, it simply shows their contrasting personalities, and how unusual these are for a child and an adult. But in truth, the concept of fresh powder represents the boy’s realization about new and uncharted territories far beyond his always-prepared itinerary. Without his father, who believes in persuading people to given in or help, the boy would have never seen how things are not always measured and studied, and that often one has to see where the road will take him. 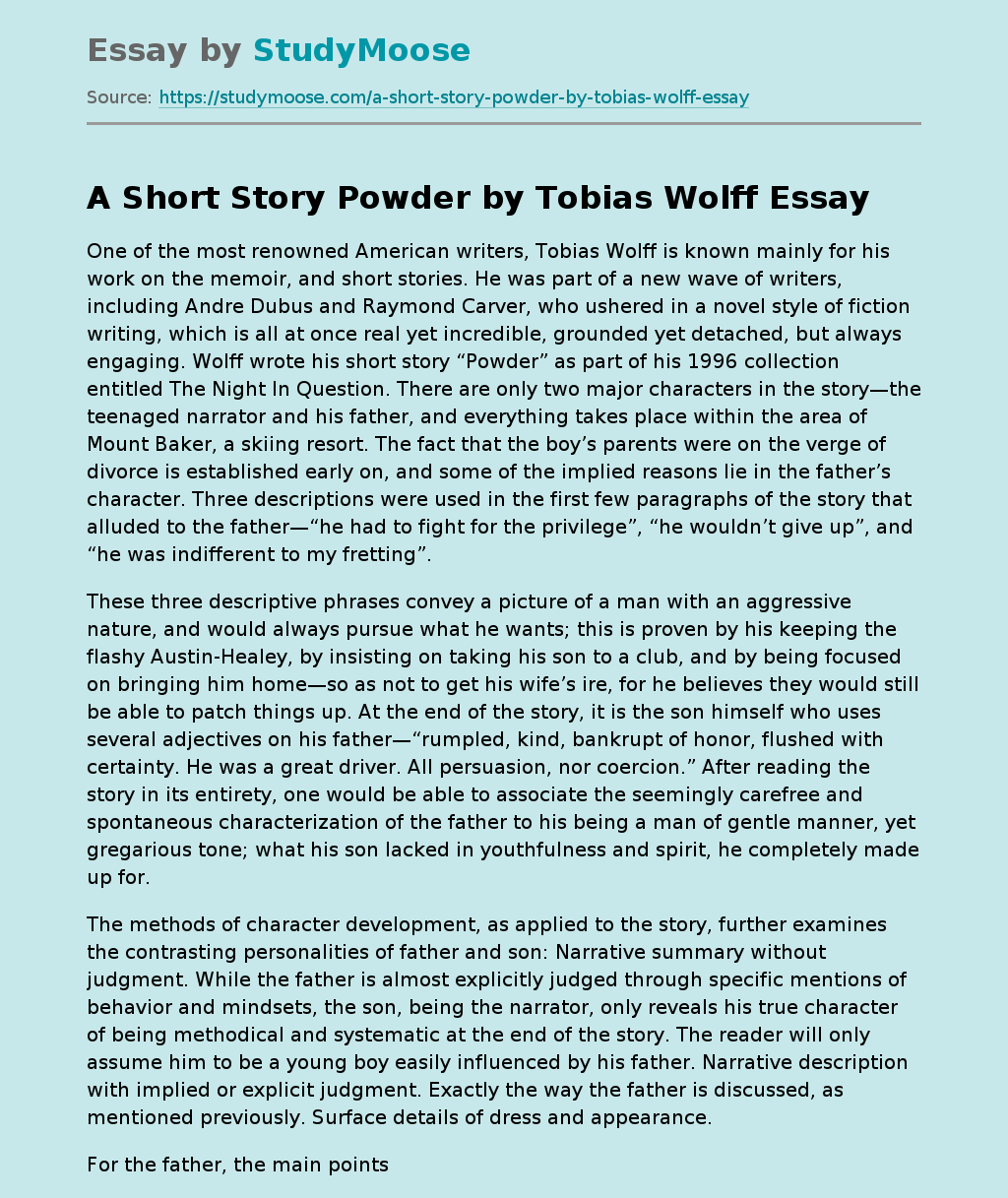