After this incident, the CEO of Johnson & Johnson was faced with very serious, important decisions; should he recall only the extra strength Tylenol in Chicago or nationwide? He was also concerned that this incident would forever ruin the Tylenol name, even after the investigation, proved that the tampering did not occur within the company. I would have advised the CEO of the company to make a public announcement, assuring the pubic that these cases were isolated to the Chicago area, that this was by no way caused by the negligence of Johnson & Johnson employees.

Also, he would need to state that the company is doing everything possible to ensure that this does not occur again and that they were working closely with the authorities to determine the cause. I would also advise a nationwide recall. I believe that a recall should have been issued for the entire nation. Although this would cause a significant loss for the company, it would save their reputation.

It would ensure the customers that the CEO was doing everything possible to protect them, which would help reestablish their trust in the company.

If a recall were not issued, people still would not be buying the product and it would sit on shelves for months, even years, because people would always be fearful they would get a bad batch. If a recall were issued, this would not be called into question. The new batches would be issued with a tamper evident seal and there would be no question whether or not they were tampered with again. From an economic point of view, recalling the product resulted in a loss of an estimated $150 million dollars.

Legally speaking, recalling the product could have saved Johnson & Johnson millions of dollars in law suits not to mention certain laws that they had to abide by through the food and drug administration. Morally, Johnson & Johnson did the right thing. They removed their product from store shelves, re-embedded a certain amount of trust in their company and potentially saved many, many more lives. These results do not significantly differ from the decision Johnson & Johnson eventually made.

Economically, the company suffered for a short period of time, but returned full force after precautions were made to ensure this never happened again, sealing the future of the company, literally and figuratively. The company benefitted from their credo because they stated their responsibilities and what they valued to the public which reinstated a certain amount of trust in the company again. There are other companies since Johnson & Johnson that could have used a similar credo, for instance the peanut butter incident and the formula incident (both from a couple years ago).

Both of these cases were similar because it involved poisoning of a product. The companies also eventually bounced back from the incident. I believe that the credo had a great deal to do with saving the company brand because it stated all of the main goals and responsibilities of Johnson & Johnson. However, I think that developing the tamper-resistant packaging, recalling the product, and distributing over 80 million in coupons also had a great deal to do with it. Without all of these factors though, who knows whether or not the company would have been able to recover from this incident.

I believe that Johnson & Johnson should not have continued to market the capsule form as soon as it returned to the market. The incident was too fresh in the publics’ mind for it to sell as well as it had before the incident. I do however feel that the capsule form should have been reintroduced to the market after a few years. Upon discovering that there was another death three years later from a similar incident, I would advise the company to ensure that this death was not from the previously recalled batch.

Also, since this incident was isolated to one person, it would seem that someone tampered with that particular bottle. With all of the new tamper-resistant packaging it would be nearly impossible for someone to poison a bottle with it going unnoticed. However, I would advise the CEO of Johnson & Johnson to inform the public of the incident instead of trying to conceal it. I would be much more interested in purchasing a product from an honest company than one who hides mishaps. 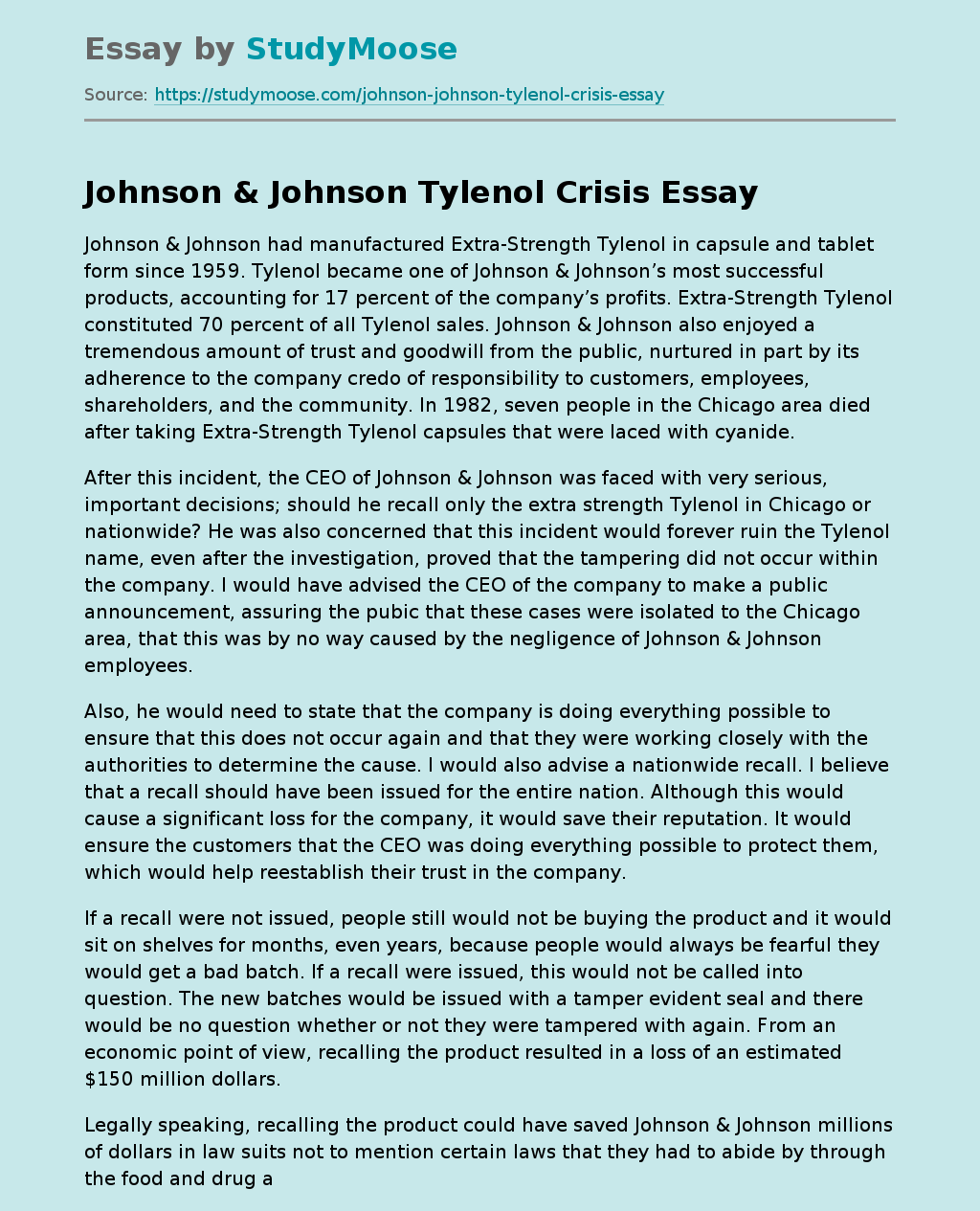