1. Notice that the subject of the dependent clause in the sentence is ‘‘men.’’(‘‘As there are to be found…) What is the independent clause? The independent clause is ‘‘calumny is diffused by all arts and methods of propagation. Because it can be understood by itself and does not depend on the first part of the sentence in order to make sense. 2. What is the pattern of imagery and diction in lines 7-10? The pattern of imagery and diction that is created in lines 7 -10, uses diction with negative and consequential words to create a negative image of a result of not making a thrust in life.

Turn in your highest-quality paper
Get a qualified writer to help you with
“ Samuel Johnson Analysis Questions ”
Get high-quality paper
NEW! AI matching with writer

If you are not doing anything interesting with life, you might be putting yourself in a position where you could be criticized and disturbed, but incapable of changing it. 3. Write the oxymoronic phrase.

The paragraph is about different personalities and different kinds of people that will judge and how they do it.

To different types of insects.

8. Note the Roarer’s two strongest points in line 21-22. Why do you think the narrator mentions these first? The two strongest point of the Roarer are his hardened front and strong voice. And the narrator mentioned this first because in order to understand his strategies, we have to know he is an expert in creating a big deal out of something maybe insignificant and he is always firm with his statements and beliefs.

9. The Roarer does not preserve ‘‘probability in his narratives’’ (lines 26-27). What do you think this means? I think this means the Roarer is always confident of what he says, his assertions don’t leave space for a ‘‘maybe or probably´´ even though they might not be true.

10. Note the tree groups of people the Roarer attacks.

The specific people attacked by him are a wealthy trader, a beautiful and elegant lady, and a writer. He attacks superior people, people with specific and unique qualities such as wealth, beauty and enough intelligence in order to write a book. 11. What is being compared to the ‘‘trees that bend to the tempest’’? The negative opinions others make about him that he tries to minimize but eventually are accurate and stronger that his arguments. That is why they erect because the Roare might create a fight (storm) arguing the negative things other say about him are false. But when his arguments end, people’s opinions gain the same strength.

12. What does this means? ‘‘His [the Roare’s] exaggerations are generally without effect upon those whom he compels to hear them? Since part of the Roare’s personality is make superior people, seem inferior with his inaccurate statements (wealthy trader/ bankruptcy) he tries to prove those superior persons he is above them, but those intelligent persons know that could not be possible just by listening to him and to his ignorance. So he wants distinguished people to hear him but they are not interested because they know the kind of person he is.

13. Note the words that describe the Whisperer’s audience. The words that describe the Whisperer’s audience are select, curiosity, gratifies, vanity and trust. 14. In this context, what does the word promiscuous (line 51) mean? Indiscriminately, not being careful or selective. This word is commonly used to refer to a single person with several sexual partners, without being selective or careful with who is this person sharing his most intimate things with, and line 51 has the same meaning but with a different subject.

15. What is the pattern you see in these words used to describe the Whisperer: ‘‘soft address,’’ ‘‘secrets,’’ ‘‘communicating… in a low voice’’. I see a pattern of inconspicuous and discreet words just as a whisper, the Whisperer is very intelligent when it comes to inform others of situations, he does it without looking mean or judgmental do, but still spreads things in an ‘‘uninterested’’ way.

16. Which is the worst of the tree men? Which is the least harmful? Even though the speaker points the man of moderation as the most pernicious enemy, his name (an irony according to the speaker’s first sentence in paragraph #5) indicates neutrality, and neutrality means not bad but not good. In my opinion the Roarer is the most dangerous, because he is very confident about what he thinks and says, even though his statements are just a result of his ideals and beliefs and not facts. He analyzes the situation and then makes an assumption. And the least harmful would be the man of moderation for the facts mentioned above.

17. What is the speaker’s tone in these words: ‘‘without interest in the question, or any motive but honest curiosity, this impartial and zealous enquirer after truth, is ready to hear either side, and always disposed to kind interpretations and favorable opinions’’? The tone of the speaker is very favorable, preferential and sympathetic. 18. How does this tone mirror the point the speaker is making about the man of moderation? Maybe as an irony, he is talking in a very good way about him but first mentions how dangerous he was. And irony is mentioned in question #21 so I took it as a context clue.

19. Are these the words of the speaker or the man of Moderation: ‘‘between dilatory payment and bankruptcy there is a great distance; many merchants have supported themselves by expedients for a time, without any final injury to their creditors; and what is lost by one adventurer may be recovered by another’’(lines 65-70)? These are the words of the man of Moderation, he is making a deep analysis of the situation taking into consideration the positive and the negative probabilities, to later make an unpredictable assumption. 20. Note the tree groups of people the man of moderation discusses. The man of moderation discusses the same tree groups of people the Roared discussed on paragraph #3 but from a different perspective. And showing how he sees situations.

21. What is ironic about this man’s tittle?

The irony in his tittle is the word moderation on it, indicating neutrality, and the first sentence of the speaker indicating that he is the most pernicious enemy.

22. Why is the man of moderation so dangerous?

Because he is unpredictable, we never know what he will think about a situation. And he makes assumptions and analyzes every little probability.

23. Which of the tree men ‘‘discovers failing with unwillingness’’? What does this expression mean? I think the man that ‘‘discovers failing with unwillingness’’ is the Roarer. According to what I read and analyzed about this personality, he is the kind of person that thinks anything he says is right and is commonly believed for credulous, that confuse his confidence with intelligence. (Line 43) and his expression means that this man does not want realize what he is doing wrong but does not refuse to discover it.

24. What does it mean for his hearers to ‘‘admit the charge without allowing the excuse’’ (lines 89-90) If the right answer for 23 is the Roarer, usually the mentioned hearers of this kind of people are the timorous and the credulous (lines 42-43) they are admitting that they just rely on what the roarer said, because as I mentioned, they are credulous, they are ready to believe anything, and the timorous might feel impressed by the sureness of his statements and how strong he looks. 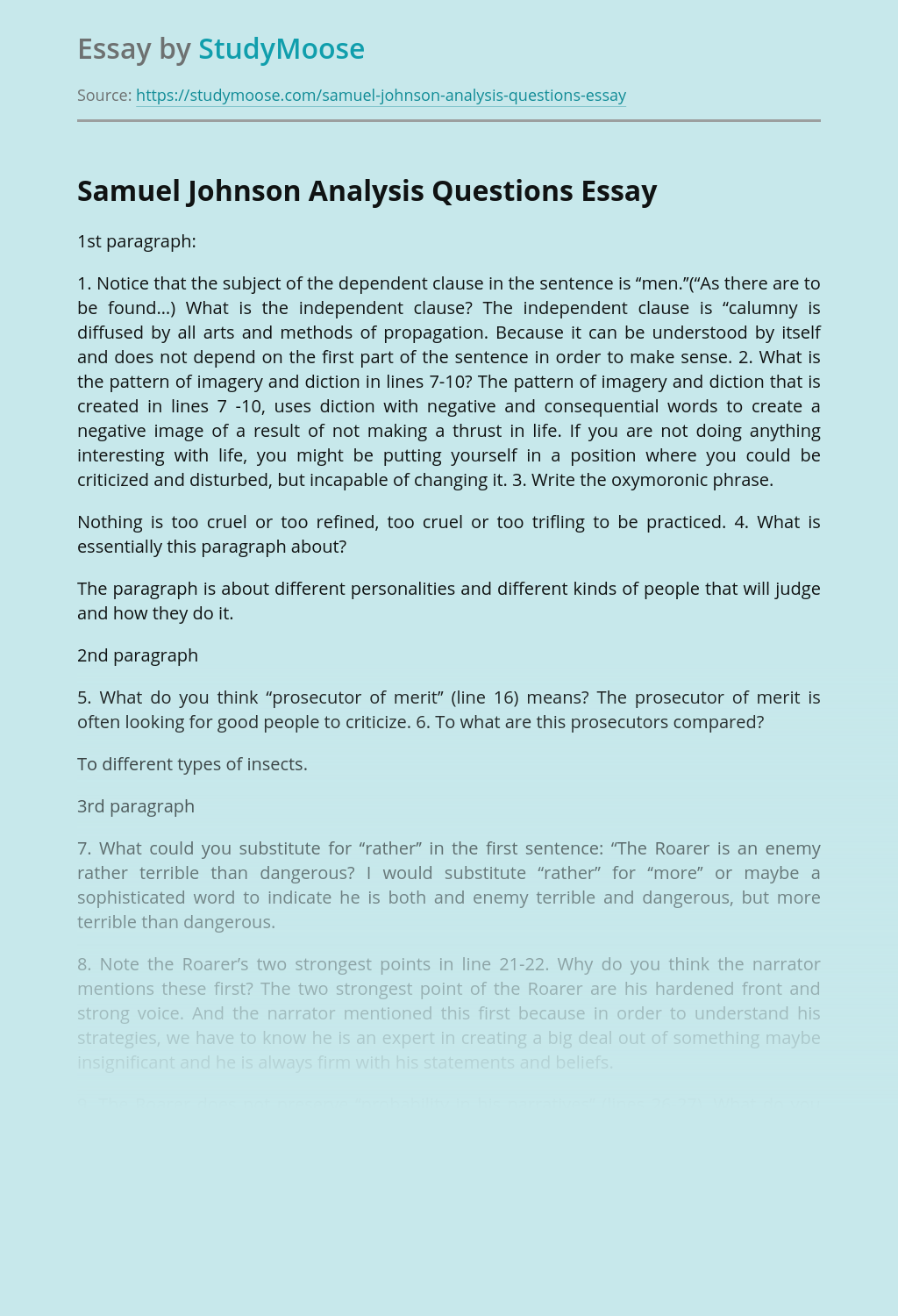 Turn in your highest-quality paper
Get a qualified writer to help you with
“ Samuel Johnson Analysis Questions ”
Get high-quality paper
Helping students since 2015
Stay Safe, Stay Original