The Eolian Harp by Samuel Taylor Coleridge, can be described as the musings of a man thinking about his love for his wife Sara, the beauty of nature and about the wonder of God in providing him with both nature and Sara. The voice of the poem is Coleridge himself as it refers to Sara, his wife at the time of writing. It is a Romantic poem as it deals with a mixture of traditional Romantic themes: those of strong feelings, the importance of the imagination and the idea of the sublime, and the natural world.

Don't use plagiarized sources. Get your custom essay on
“ ‘The Eolian Harp’ by Samuel Taylor Coleridge ”
Get custom paper
NEW! smart matching with writer

The Eolian Harp is written in blank verse and has an irregular split into two verse paragraphs, one long, one short. The form is lyrical as it deals with a mans thoughts and emotions but it is often written in a conversational style, particularly in the first verse paragraph giving it an informal, simple feel:to sit beside our cot, our cot overgrown (l.3)andI stretch my limbs at noon,Whilst thro my half-closd eyelids I beholdThe sunbeams dance.

However, there is one point that a singular rhyme does appear:On vain Philosophys aye-babbling spring.

For never guiltless may I speak of Him,Th INCOMPREHENSIBLE! (l.57-59)It could be argued that this rhyme happened naturally without any significant meaning, but that is unlikely. Poets are very particular about their words and it is more than coincidence that, at the moment Coleridge praises his god, he introduces a rhyme on the word Him. That this is followed by a capitalised INCOMPRENSIBLE adds to the argument that he is important and the effect is that it does stand out from all that comes before it as, although considered in isolation it sounds pleasant and flowing, compared to the blank verse of the rest of the poem it sounds out of place.

This use of capitalisation and exclamation marks is a technique that Coleridge uses throughout the poem to give some words an emphasis:My pensive SARA!; (l.1)andPEACE, and this COT, and THEE, heart-honourd Maid! (l.64)Considering the subject matter of the poem, it is clear that the capitalisation of certain words is used to express the things that he finds most important. Capitals are often used to imply shouting in text and this is indeed what Coleridge is doing here; shouting out loud about the things he treasures most: Sara, God, Peace, and his Home (Cot) with Sara his heart-honourd Maid. Likewise, the exclamation marks used on many of these same words and others like Love! and the world so hushd! shows further emphasis on these treasures.

If we continue to look at the form we see that The Eolian Harp is recognizably in iambic pentameter but Coleridge at times employs broken rhythms to add variety and interest to his blank verse. This can be seen in the change of foot at particular points. While iambs are mainly used, the sudden introduction of spondees breaks up the monotonous droll that could over power a purely iambic blank verse:x / / x /thy soft cheek reclind(l.1)andx / / x /the broad-leavd Myrtle(l.4).

It is this break that Edward Zuk states make Coleridge’s rhythm unsettling and jittery, as it acts to keep the reader on edge and ready for the next interruption or leap in thought.Adding to this unsettling rhythm is the continuous used of enjambment to quicken the pace. Examples of this can be seen in the first few lines. After the poets initial exclamation of My pensive SARA! the reader is encouraged to speed through the poets thoughts:thy soft check reclindThus on mine arm, most soothing sweet it isTo sit beside our cot, our cot over grownWith white flowerd Jasmin, and the broad-leavd Myrtle,(l.1-4)Interestingly in this passage there are a few slight breaks with the use of commas but these are all used in the middle of lines and it is not until line 9 that we reach our next stop. The end of each line needs and makes more sense once the next line has been read.

In opposition to this quickening of pace is the use of caesura to cause a sudden thought provoking stop in the middle of a line:The stilly murmur of the distant SeaTells us of Silence. (l.11-12)The effect of using this technique at this point brings the thought to mind that we only truly hear the noise of the sea when all else is silent. This sudden stop and silence seems a perfect way to introduce the main theme as from this point on Coleridge talks about the Harp that is to dominate the tone of the poem until the end of the first verse paragraph.

Coleridge uses a wonderful section of continuous alliteration from lines 17-20 in order to give depth to the Harp:And now its stringsBoldlier swept, the long sequacious notesOver delicious surges sink and rise,Such a soft floating witchery of sound’ (emphasis added) (l.17-19)The effect of this continuous use of the s sound creates the effect of a gentle, flowing and moving sound much like the long, delicious, floating sound that Coleridge tries to describe the harp as having. The actual effect of this alliteration is to create a sensual, relaxing tone at this point in the poem.

Another technique of emphasis used throughout the poem is the use of imagery. Coleridge personifies the nature around him by comparing it to abstract nouns – the white flowerd Jasmin represents Innocence, the broad-leavd Myrtle represents Love and the star of eve/Serenely brilliant represents Wisdom. I.A. Richards states that imagination is a creative power by which the mind gains insight into reality, reads nature as a symbol of something behind or within nature not ordinarily perceived (Richards, 1935, as cited in Wellek , 1963). These abstract nouns do exactly this; they give life and character to nature.

Coleridge uses this unperceived nature to appeal to the human senses. Each are introduce in turn starting with sight through the watching of the clouds and the evening star that are serenely brilliant. This is quickly followed by smell through the exquisite scents snatchd from yon bean-field. Sound follows next with the world so hushd! / The stilly murmur of the distant sea and finally touch as the lute is caressd by the breeze like some coy Maid half-yielding to her lover.

All of these senses are expressed between lines 8 -15 and provides the reader with a rich description of the landscape adding to the character of nature, expressed in the abstract nouns above. The touch of breeze takes on a more powerful role later as God is himself personified in the intellectual breeze that sweeps over the organic harps of animated nature. The metaphorical use of the harp to represent all living things is a powerful symbol in the poem suggesting that all nature is caressed and made beautiful by God (the breeze), just like the sweeping sounds of the Harp.

The introduction of God towards the end of the first verse paragraph also brings to an end the mindless musings of the poet. It is here that he is comforted by the calming force of his beloved Sara. It is she who, while allowing him these thoughts and feelings, brings him back down to earth to realise what is actually around him. This is shown by the one philosophical moment in the poem:And what if all of animated natureBe but organic Harps diversly framd,That tremble into thought, as oer them sweepsPlastic and vast, one intellectual BreezeAt once the Soul of each , and the God of all?(l.44-48)Nicholas Reid (2006) cleverly sees this section as venturing Coleridges heresies under the indulgent eye of his beloved, gently testing the limits of her tolerance before coming back to heel under the mild reproof of her more serious eye (p68).

When we move into the second verse paragraph the rhetorical question is brought crashing down by Sara and Coleridge acknowledges it as coming from an unregenerate mind of vain Philosophy. The whole second paragraph highlights a definite change of tone as we get a direct appeal to God. The affect of this is that it gives a history to the thoughts and feelings previously expressed. It shows that Coleridge had not always felt this happy and that it was God that gave him this happiness. Coleridge talks of God with awe / when I praise him as he healed me / A sinful and most miserable man and gave me to possess all the things that he treasures. It is a powerful ending that gives a keen conviction to his previous thoughts and heightens them further.

It is clear from this analysis of the text that Coleridge uses the elements of poetry to create required effects. The occasional capitalisation of words, the use of exclamation marks and use of blank verse elevates the parts of the poem that Coleridge feels to be most important. Likewise, nature comes alive through human senses and through personification it comes out of hiding to embrace Coleridge and Sara. As Coleridge feels this embrace he realises who he needs to thank for this. The change of tone signifies his seriousness in the second verse paragraph as he is now talking directly to God the creator of all of his happiness. 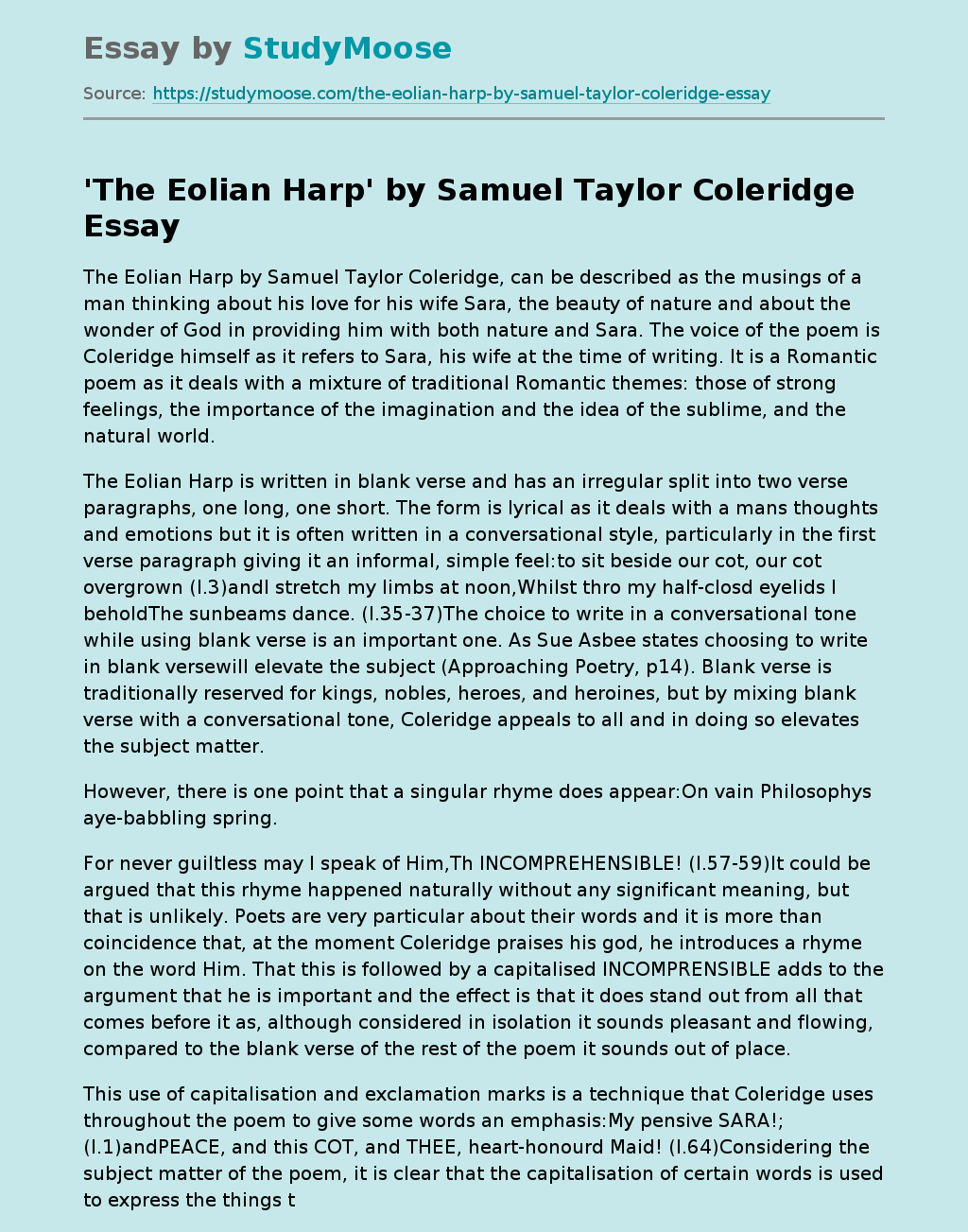