During the Romanticism movement, romantics used life to a greater extent than what had previously been done before. Previously people had created poems and other art with the intentions of conveying their own thoughts, but now the romantics conveyed in their works the inspiration to their thought process. The romantics strive for poetry that expressed their journey, which in itself defines romantic imagination. Two romantic poets, William Wordsworth and Samuel Taylor Coleridge, are recognized for forcing reader’s minds to fully experience and reflect upon their perceptions, emotions, and journey.

Don't use plagiarized sources. Get your custom essay on
“ William Wordsworth and Samuel Taylor Coleridge ”
Get custom paper
NEW! smart matching with writer

Wordsworth’s writings are about a journey where he travels within himself and Coleridge’s work shows a journey towards the limits of creation. Their work redefined the fundamental ways that individuals look at them themselves and view the world.

In this era of romanticism, Imagination was viewed incredibly powerful; as it could interact with nature rather than simply react to it. These interactions are what the romantics focused on as influence in their works.

Wordsworth and Coleridge both took their writings into an unfamiliar realm that brought insights into the effects of nature. The way individuals view Nature is complex; Imagination is at times in harmony with it, but at others in conflict. William Wordsworth and Samuel Taylor Coleridge’s style of writing has grown more persuasive and intense in their expression of imagination and its relationship with nature.

Nature to many poets offers comfort and support. William Wordsworth sees nature in a romantic and rewarding sense, that it is constantly contributing to individual’s lives and inspiring them.

William Wordsworth based his writings on the ideals that man and nature are inseparable and that it can educate individuals beyond anything else. Wordsworth often expresses his appreciation for nature through imagination in his poems, as can be seen in “Tintern Abbey.” The speaker of this poem looks out and is content because the view is aesthetically pleasing, but also because he is thinking how in the future he will enjoy looking back on this current memory. Wordsworth uses this deep thought about the place the speaker is in, to begin a discussion about the romantic ideals of connections to nature and imagination. He is nostalgic from remembering pleasant things that seemed insignificant at the time, but are now revealing their importance. He is in dismal from living in the city, but the memory of having done nice things for people, even if each act of kindness was little or not acknowledged, was a gift to him. Most people when they are upset or are looking for support turn to religion and God, but Wordsworth has the speaker look to nature. He has the speaker reliving his memories with nature, to reclaim his imagination.

Similar to a human’s life, there is an eternal ending for Imagination; however, Imagination can be revived.  Wordsworth writes that the speaker in this poem has matured beyond his “thoughtless youth” and now shows an appreciation for his current state. When he gives Nature his attention, he hears the “still, sad music of humanity.” This quote is about much more than the physical aspect he hears, it is about the connection he draws between nature and the human nature to connect these things to memories. What he hears has the power to “Chasten and subdue” him which means make him humble and calm. Wordsworth uses imagination as the power to see into reality, rather then realism itself. This poem takes its origin from the emotion remembered through “chasten and subdue” and from this recollection the emotion is conveyed through the poem. Using sensory experiences, Wordsworth generates an emotion from a place that offers solace to him, this emotion remains in his mind. Wordsworth is teaching readers how to understand their feelings, through expressing himself as an ardent nature lover.

Nature is not always interpreted as a moral guide or a type of support. The content of Samuel Taylor Coleridge’s poetry focuses on the belief that many of our ideas about nature are constructed within our mind. Nature conflicts imagination as it is seen at times as a reflection of the perfect world of ‘ideas,’ but really the ideas are just what people interpret them to be. Natural images only carry abstract images because of the projection of life that individuals have given it. In one of Coleridge most famous poems, “The Rime of the Ancient Mariner,” he portrays these ideas. Coleridge writes this description to express the fear the mariner feels. This quote amplifies Coleridge’s hostile attitude towards nature. The inanimate ice is posing a threat as it’s making the ship sail the wrong way; this is a prime example of Man vs. Nature. From this fear, the mariner is now motivated to overcome the limits put in place. He won’t let nature forecast his future.  The mariner has shot an Albatross; he claims that doing this, the ship began sailing northward as he wanted.

The mariner resented what nature was doing so much that he disregarded the bad luck shooting the bird would bring. Coleridge is emphasizing that humans can control nature to serve them how they want it to. He includes this to portray the eternal conflict between man and nature. The mariner does an act of penance for his sin of destroying nature, by telling his story to individuals he crosses his path with. Coleridge’s wants to teach others, regardless of the situation, they should still respect nature’s creatures. All creations posses value and contribute to the power of imagination. It is not to be confused that although he respects nature, he does not admire it as the main source of anyone’s imagination, including the mariner. The mariner suffered a painful experience, but is saved through his journey to travel past the limits’ nature emplaced, exposing his imagination. The mariner is a representation of Coleridge’s human perception and individual power. Coleridge looks for truth and knowledge in his everyday life, as the mariner looks for the same qualities on his journey overseas.

Many things can flourish one’s imagination. The two poets experience imagination through different means, yet ultimately arrive at the same conclusion. Their writings inspire many; one of the most valuable and famous being a poem called “Nature,” by poet Ralph Waldo Emerson. In Emerson’s work, he exposes his perception, emotion, and journey that he discovered from their writings. Nature gives us many physical gifts to live, such as water, food, plants, and air, but it also gives us inanimate resources such as a realm of escape, and motivation to conquer. Both Wordsworth and Coleridge succeeded in creating poems that inspired readers to think about the effect nature has on one’s imagination. 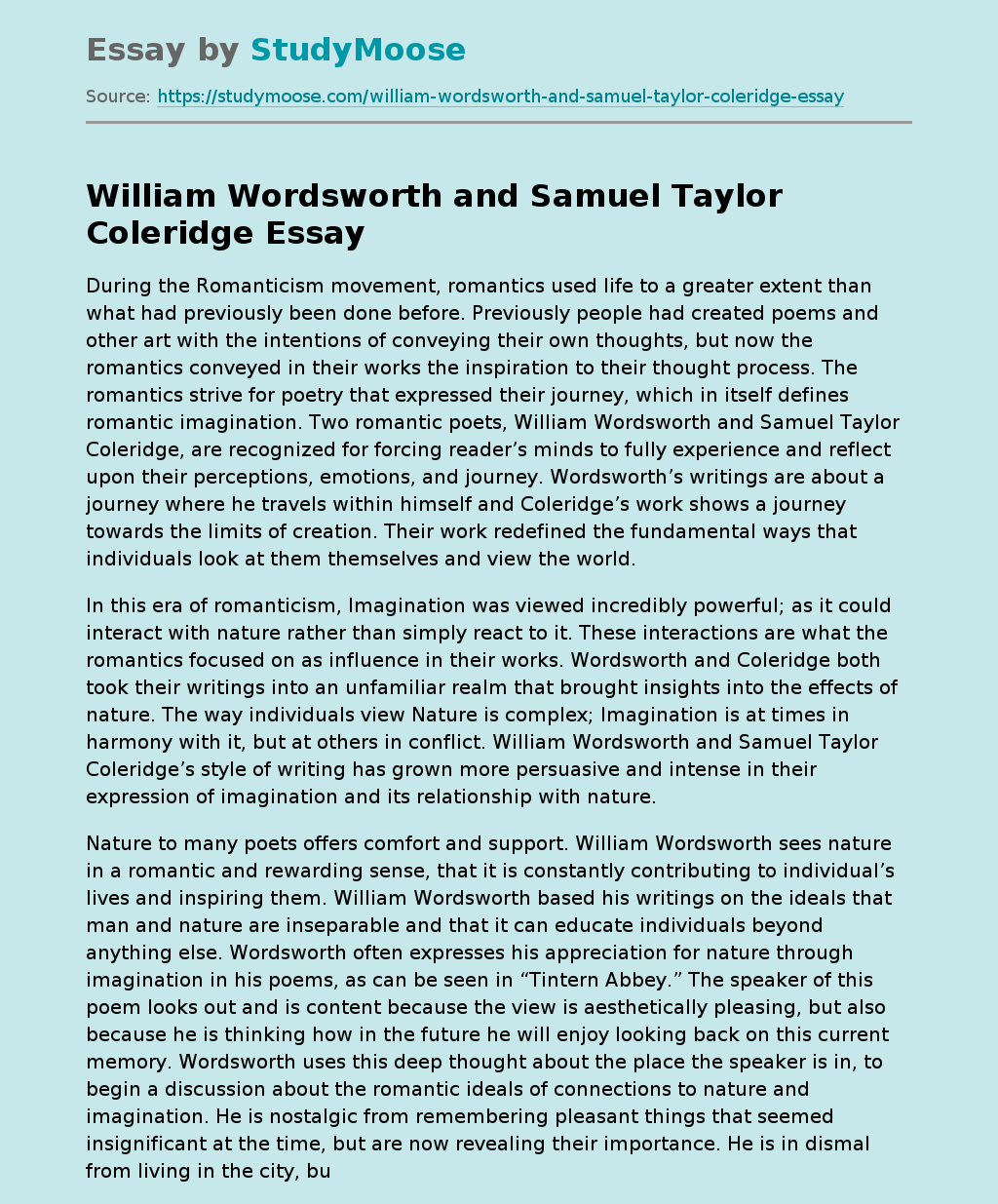