On the surface, “Waiting for Godot” is purely a series of nonsensical conversations and attempts by the principal characters in creating diversions to pass the time. However, there is some evidence that the play is more than just a slapstick routine of two bored, elderly men waiting for another man named Godot near a skeletal tree. Though the result of the inane dialogue over trivial matters is indeed comic, and has probably contributed to having the play considered part of the Theatre of the Absurd (Merriam Webster), Samuel Beckett’s two-act play also portrays a tragedy of sorts.

Don't use plagiarized sources. Get your custom essay on
“ Samuel Beckett’s Waiting for Godot Analysis ”
Get custom paper
NEW! smart matching with writer

The play does not revolve around a solid plot, but rather gravitates around the restlessness and interchangeability of days when there is nothing much to do. In the two acts, nothing much happens except two people waiting for another person. The entrance of two other characters, Pozzo and his slave, Lucky near the end of each of the two days provide some much needed action that makes the hours pass by more quickly.

Proficient in: Waiting For Godot

At the end of each act, a boy arrives with a message from Godot, but the one awaited for does not come. Therefore, in a way, the play is focusing on “nothing”, though “nothing” here is not as pointless as it seems.

“Nothing” actually is what makes the two main characters busy. They constantly have to find something to fill the void, or erase the silence; hence, they are busy trying to banish nothingness. This void is a clue that this piece is telling more than a comic tale of two friends.

It is in fact dubbed as a tragicomedy, wherein two people are trying to find the meaning of their lives (Merriam Webster). It is part tragedy because the premise of having to wait for someone who does not even come provides uncertainty. Estragon complains that “Nothing happens, nobody comes, nobody goes.

It’s awful! ” (Beckett) For two elderly men to have no other purpose each day other than waiting is sad in itself, especially viewed from the perspective of modern people who are constantly on the go. Each day has a goal, and for some, a set agenda. Vladimir and Estragon pass their time waiting for a man that they have not even met. This man, Godot, does not appear even at the end of the play though the play is about waiting for him. Vladimir and Estragon may be devoting their hours waiting for this man, but they do not even know what he looks like.

In Act I, they mistake another man, Pozzo for Godot. Pozzo takes note of this, “You took me for Godot. ” (Beckett) It seems that what breaks the monotony can be thought of as Godot, however at this point it is not him yet. In another light, Vladimir and Estragon are apparently expecting a significant change to come with the arrival of Godot. Near the beginning of Act I, they talk about the two thieves crucified on either side of Christ. Vladimir reminds Estragon, “Our Saviour. Two thieves. One is supposed to have been saved and the other . . . (he searches for the contrary of saved) .

. . damned”. (Beckett) There are two of them as well, and they seem to be waiting for someone to save them. That someone could be Godot. However, the tale of the two thieves suggests that only one of them may benefit from Godot’s arrival. Estragon has to struggle with short-term memory, while his companion, Vladimir has to constantly remind him the time of day and certain events that supposed to have happened to Estragon himself. When asked by Vladimir whether the same group of people have beaten him up, Estragon replies, “The same? I don’t know.

” (Beckett) The repetitive events do not help in making the events comprehensible to Estragon. In both acts, Pozzo and his slave, Lucky pass by Estragon and Vladimir’s way. Moreover, a boy who looks like the messenger in the first act arrives with yet another message on the second day. None of the three acknowledges having met the two elderly men by the leafless tree during the first day. Estragon’s memory problem may add to the bleakness of the situation, but Vladimir’s reminders give a sense of the relationship between the two. Vladimir acts as a real friend by providing Estragon the missing pieces.

There are moments when Estragon surprisingly relates some information vividly, “There are no sources in the current document… The Dead Sea was pale blue. The very look of it made me thirsty. That’s where we’ll go, I used to say, that’s where we’ll go for our honeymoon. We’ll swim. We’ll be happy”. He seems to remember the Dead Sea clearly, although whether he remembers who he is talking to at that very moment is unclear. He refers to a honeymoon which he is supposed to share with the one he is conversing with. He could be referring to his close friendship with Vladimir, or he could have been thinking of a literal spouse.

“Waiting for Godot” reveals vignettes of tragedy disguised in two acts of comedy. Through the seemingly pointless dialogue where the two men fight, embrace and even contemplate hanging themselves, the reader gets glimpses of the two main characters’ lives. When Vladimir says, “Hand in hand from the top of the Eiffel Tower, among the first. We were respectable in those days. Now it’s too late. They wouldn’t even let us up,” (Beckett) he is longing for the past. This longing suggests that the two companions have had a better life.

Vladimir and Estragon have a friendship that serves as a constant in the two acts, and in their lives. The previous reference to the past is also a reference to their longevity as companions and friends. Their relationship, which involves embracing and dependence, together with the reference to a honeymoon, is suggestive of a marriage. Vladimir and Estragon’s relationship is like a married couple’s. Their friendship is what they can truly depend on in a world that is becoming so confusing and empty, especially for the forgetful Estragon. The other characters are not so reliable.

Pozzo, in his blindness, becomes another character who is confused about time and the people he meets. Something different, though tragic, has happened to him but how he has become blind, and why he does not remember the incident leading to his blindness, are never explained. POZZO: I woke up one fine day as blind as Fortune. (Pause. ) Sometimes I wonder if I’m not still asleep. VLADIMIR: And when was that? POZZO: I don’t know. (Beckett) In conclusion, “Waiting for Godot” may be a play about “nothing” in the sense that there is no plot, but it is written not just to provide some laughs or a sense of bewilderment.

As mentioned earlier, it is a tragicomedy, a dramatic piece which incorporates both tragic and comic elements. (Encyclopedia Britannica) The play explores hopelessness and uncertainty as two people try to find the meaning of their existence. The two await Godot, who may hold the answers in his hands. Considered as an innovation in drama (Merriam Webster), “Waiting for Godot” can be referred to as experimental. It is tragic, but not to the point of complete hopelessness. At the end of the play, Estragon feels like he can no longer go on with his life and suggests that they bring enough rope the following day.

Vladimir agrees that they should hang themselves, but provides a condition that they will not go through with the suicide if Godot arrives. Godot is the fading hope to a meaningless existence. Both Vladimir and Estragon are already despairing about the lack of direction in their lives, which have turned for the worse as they become older. However, the repetition that happens in the two acts suggests that what the two are experiencing has been going on for much more than two days. Vladimir and Estragon have already considered suicide in Act I, but have opted to see what Godot will say (Beckett).

Their thoughts rarely linger on one topic, so they have quickly discarded the idea of killing themselves. “Waiting for Godot” is a unique way of presenting the values and uncertainties of people without creating a concrete beginning and ending. 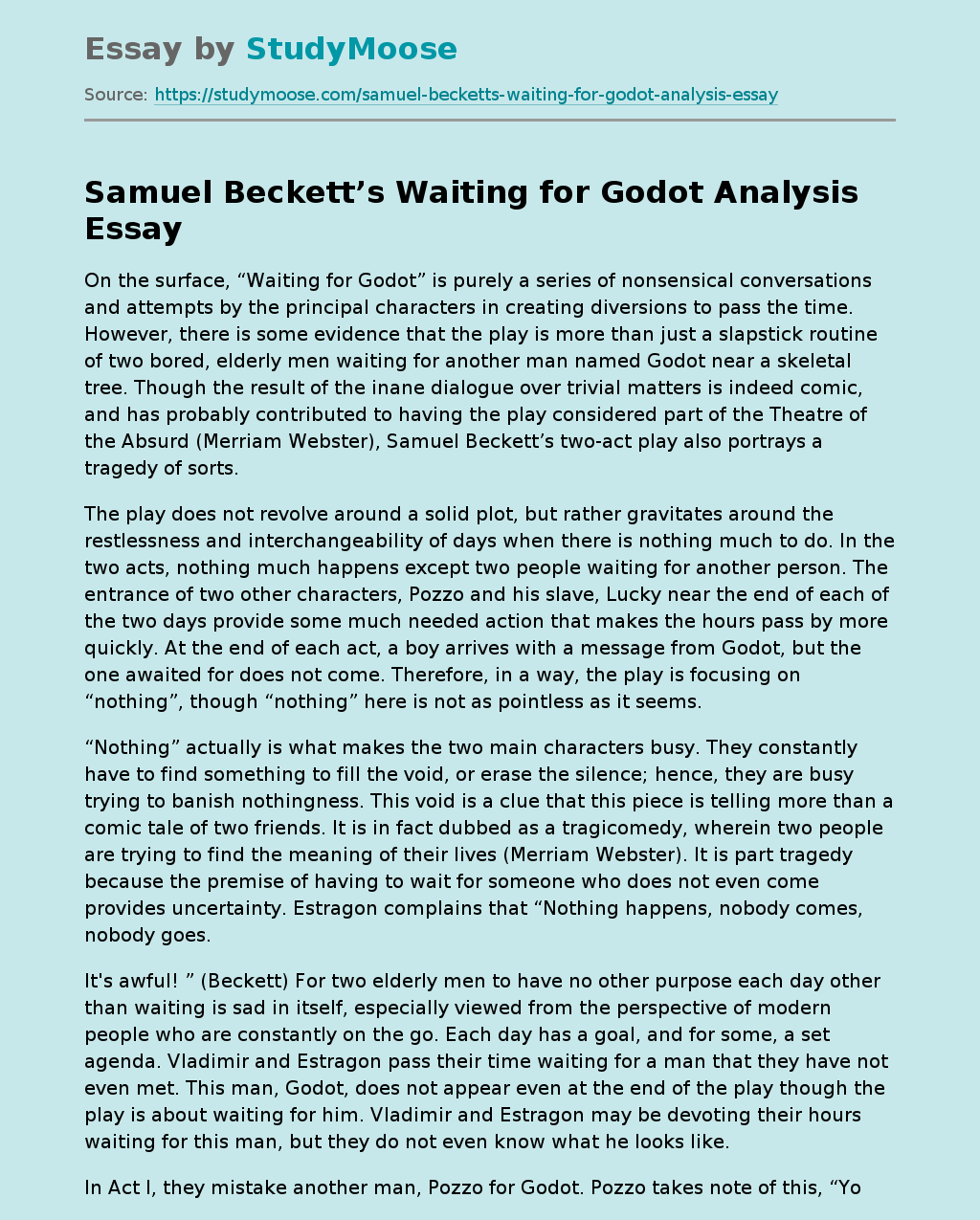