Waiting for Godot and Rosencrantz and Guildenstern Are Dead

In both Waiting for Godot by Samuel Beckett and Rosencrantz and Guildenstern are Dead by Tom Stoppard, the language and tone of the plays create a lack of purpose of the lives for the characters in their plays. Both plays were written during the time of the Theatre of the Absurd. The Absurdist movement was used to show a sense of senselessness of the human condition. Rosencrantz and Guildenstern are Dead follows two men who are clinging onto their royal summons from King Claudius for meaning, but fail to act independently when the opportunity arises.

Don't use plagiarized sources. Get your custom essay on
“ Waiting for Godot and Rosencrantz and Guildenstern Are Dead ”
Get custom paper
NEW! smart matching with writer

The reactive nature of Rosencrantz and Guildenstern is demonstrated through the impotence and uselessness of their words in the times that there is a chance to act. Similarly, in Waiting for Godot, with double meaning and a circular structure of their words, Gogo and Didi struggle to exercise their wills while waiting for Godot. The seeming futility of language in the plays is a device used by the playwrites to illustrate the degeneration of the human condition and the message of the theatre of the Absurd: existential fatalism.

In Rosencrantz and Guildenstern are Dead, the language of the Player is important in indicating themes throughout the play. One way death is prominent throughout the play is through the language used by the Player. When the Player is talking to the Rosencrantz and Guildenstern, he says, “I should concentrate on not losing your heads. ” Not only does this carry a symbol of death, but also foreshadows the imminent deaths of the two main characters.

The language of the Player is used to indicate themes in the play, such as the time when he says, “every exit being an entrance somewhere else. ” This quote is one of the most important quotes in the entire play. The Player is telling Rosencrantz and Guildenstern that even if they exit, they will enter somewhere else. So, at the end of the play, when they are killed, they do not die, they simply exit the stage for the first time the entire play. This exit is a way for the characters to enter onto the play to go through the same cycle again the next night.

This is an indication of the way Stoppard feels about exits in that they are simply a way for something else to continue on. The language in Waiting for Godot is a tool used by Beckett to show the struggles two men have to find meaning in their lives. Repetition of Gogo and Didi’s lines create a never ending cycle the characters have to go through in their mundane lives. The line, “give us this day our daily…” is a line that Gogo says at the end of most conversations, or after an event has happened. This repetition indicates the fatalistic nature of this play.

After the line is said, there is still no resolution to the problem they have been faced with. This creates a tension in the audience, but in the end, there is still no resolution, meaning, Gogo and Didi are still stuck in this purgatory setting destined to wait for Godot until they exercise their wills. The idea of fatalism is a theme in which the Player, in Rosencrantz and Guildenstern are Dead, uses his words to indicate. He feels that the world is just a stage, their lives are written, which is true, they just don’t know it.

Other than the actual reality of the play being a written story for the stage, the Player is the character that brings up the idea of fate to Rosencrantz and Guildenstern. The Player says, “I’ve been here before” at one point in the play. Stoppard uses this statement to illustrate the theme of fatalism. There is a sense that Rosencrantz and Guildenstern are destined to repeat this event over and over and are approaching their death. At the start of Waiting for Godot, Didi says, “nothing to be done” and Gogo replies, “I’ve been beginning to think that too.

Didi’s first lines have a double meaning to them that serves as a way for Gogo to begin the existential point of view he keeps throughout the play. This continues through the entirety of the play, until, the dismal tone at the end of the play, it is clear that Gogo and Didi have given up. They have resigned to even the thought of using their wills to begin a life of not repeating the same events day after day. Through this tone and the meaninglessness of their words, Gogo and Didi are trapped in a never ending cycle of fate and uselessness.

At the end of Rosencrantz and Guildenstern are Dead, Rosencrantz is the first to “die”, or fail to reappear, and at that point he is very resigned to the fact that they are going to die. With his language, he is unable to express any sort of remorse or caring about what he knows is going to happen. The tone of Rosencrantz and Guildenstern is a tone of indifference at the end. It is a tone of indifference because both men know what is coming, saying things like, “Well, we’ll know better next time. This indifferent tone directly relates to the idea of existential fatalism, and the message of the Theatre of the Absurd. Through the language, Stoppard creates the idea of existential fatalism and the de evolution of the human condition because of how easy they give up, they have no fight left in them and for this reason, there is a degeneration of the human condition. The language and tone of the two plays are used in a way to create the inadequacy of the human condition.

All characters, other than the Player in Rosencrantz and Guildenstern are Dead, do not know the significance of their words. Not only are they literally standing still, but their words make it so they are figuratively standing still as well. The play writes use the impotence of language in a way that it creates the feeling of stillness, as well as, not being able to move forward. The characters in the plays are stuck in their world of existential fatalism. In these plays, unlike many others, the language is not used because of its’ powerfulness, but because of its powerlessness.

Waiting for Godot and Rosencrantz and Guildenstern Are Dead. (2016, Dec 17). Retrieved from https://studymoose.com/waiting-for-godot-and-rosencrantz-and-guildenstern-are-dead-essay 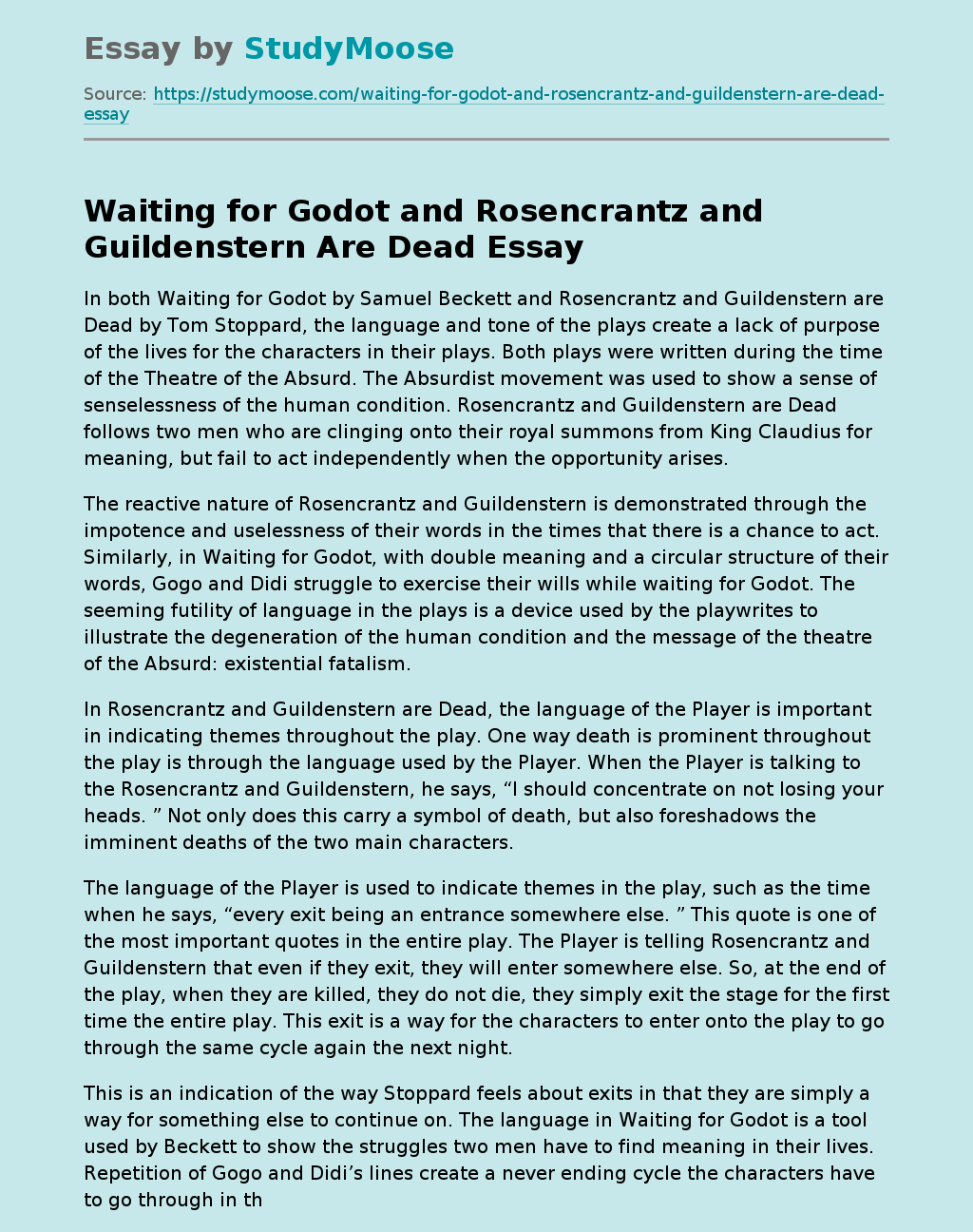