What if everything gets one nothing? What if it was true that man has the power to do whatever he pleases, but in the end all of it will mean – for lack of a better term – nothing? This school of thought is called existentialism, which is crucial in Tom Stoppard’s play Rosencrantz and Guildenstern Are Dead – an absurdly written response to William Shakespeare’s Hamlet. Rosencrantz and Guildenstern experience times of enlightenment, humor, and sorrow throughout their journey, leading them to ponder whether their livelihood actually has some sort of positive meaning.

Don't use plagiarized sources. Get your custom essay on
“ Rosencrantz and Guildenstern Existentialism ”
Get custom paper
NEW! smart matching with writer

However, the ultimate gift of death crept up on them, without any explanation or hope, for all eternity. The ideas of existentialism are shown in the play through unstable identities, uncertain knowledge of the past, and anti-heroes which lead to Rosencrantz and Guildenstern’s ultimate fate – their feared deaths. Unstable identities in the play contribute to the idea of existentialism by making Rosencrantz and Guildenstern indistinguishable, emphasizing their need for meaning.

When introducing themselves to the Player and the tragedians, Rosencrantz announces, “My name is Guildenstern, and this is Rosencrantz…I’m sorry – his name is Guildenstern and I’m Rosencrantz” (Stoppard 22). Their own deprivation of identity shows that the meaning in their individual lives is lost, making them into cynical, unrecognizable objects. In addition, they have lost their idiosyncrasies, creating a problem for other characters in distinguishing between the two. During a discussion about the King giving them an equal amount of money, Guildenstern exclaims that the king “wouldn’t discriminate between [them]” (Stoppard 104).

To the King, Ros and Guil are simply two objects that are willing to assist in any way possible; to him, there is no point in getting to know them individually. The King’s lack of differentiation between the two shows that Ros and Guil have lost a deeper meaning to the King, leading to the bereavement of identity. The ambiguous identities of Rosencrantz and Guildenstern obliged their characters to embody no purpose, inflicting the idea of existentialism. Ros and Guil’s doomful deaths were caused by their nonexistent individuality.

The pair’s past also lead them through an existential drift; without meaning in their past, the pair still have nothing to go on. The uncertainty of Rosencrantz and Guildenstern’s past supplements the idea of existentialism by making the play enigmatic. While walking along the path to Elsinore Castle, Ros and Guil attempt to comprehend what they are doing before making the expedition to the estate; Guil asks Ros, “What’s the first thing you remember? ” and Ros replies, “Oh, let’s see…the first thing that comes into my head, you mean?… Ah.

It’s no good, it’s gone” (Stoppard 16). Ros and Guil are not able to recollect past events due to the fact that the prior matters adhered no meaning. Even when Ros and Guil are dying, they cannot recall what they have done to deserve this with Ros crying, “We’ve done nothing wrong! We didn’t harm anyone. Did we? ” and Guil replies “I can’t remember” (Stoppard 125). At their dying second, Ros and Guil are still unable to fathom what they have or have not done. Their past events are proven to be meaningless, leading them to an existential wandering containing no answers.

Also through the use of anti-heroes, Stoppard made Rosencrantz and Guildenstern useless individuals who could not carry out a duty without the succor of one another. An anti-hero, in some cases, considers his or herself to be incapable of completing tasks while being corrupt, sullen, and disaffected. Rosencrantz and Guildenstern entrust each other to get through all dilemmas and yet they still become confused. When deciding what their next undertaking shall be, Guil asks Ros, “What are we going to do now?

” and Ros replies, “I don’t know. What do you want to do? ” (Stoppard 17). Using a popular decision-making device, Ros and Guil reveal that they do not have the confidence to decide what to do and to execute the decision. Confidence is an indicator of optimism, responsibility, and initiative; Ros and Guil occupy none of these positive attributes, giving manifestation of anti-heroes. Also, Ros and Guil count on the King’s letter to get through the peregrination, with Guil saying, “Everything is explained in the letter.

We count on that” (Stoppard 105). Ros and Guil refer to the letter whenever a predicament arises, urging them to resolve the issue. With the letter epitomizing their fate, it is what they count on the most. The pair fails to envisage that one another and the letter were the ultimate factors that lead to their demise. Rosencrantz and Guildenstern live up to the idea of anti-heroes in existentialism by being each other’s hopeless backbones and depending on the letter, which leads them to their fateful deaths.

Through the utilization of vacillating identities, unforeseeable knowledge of the past, and anti-heroes, existentialism augmented Rosencrantz and Guildenstern’s ultimate kismet – their anticipated deaths. Tom Stoppard leads Ros and Guil through an obscure existence that turns out to encompass nothing. With this, the reader might ask, “What is life without purpose? ” – And one can say that it is certainly no life at all. 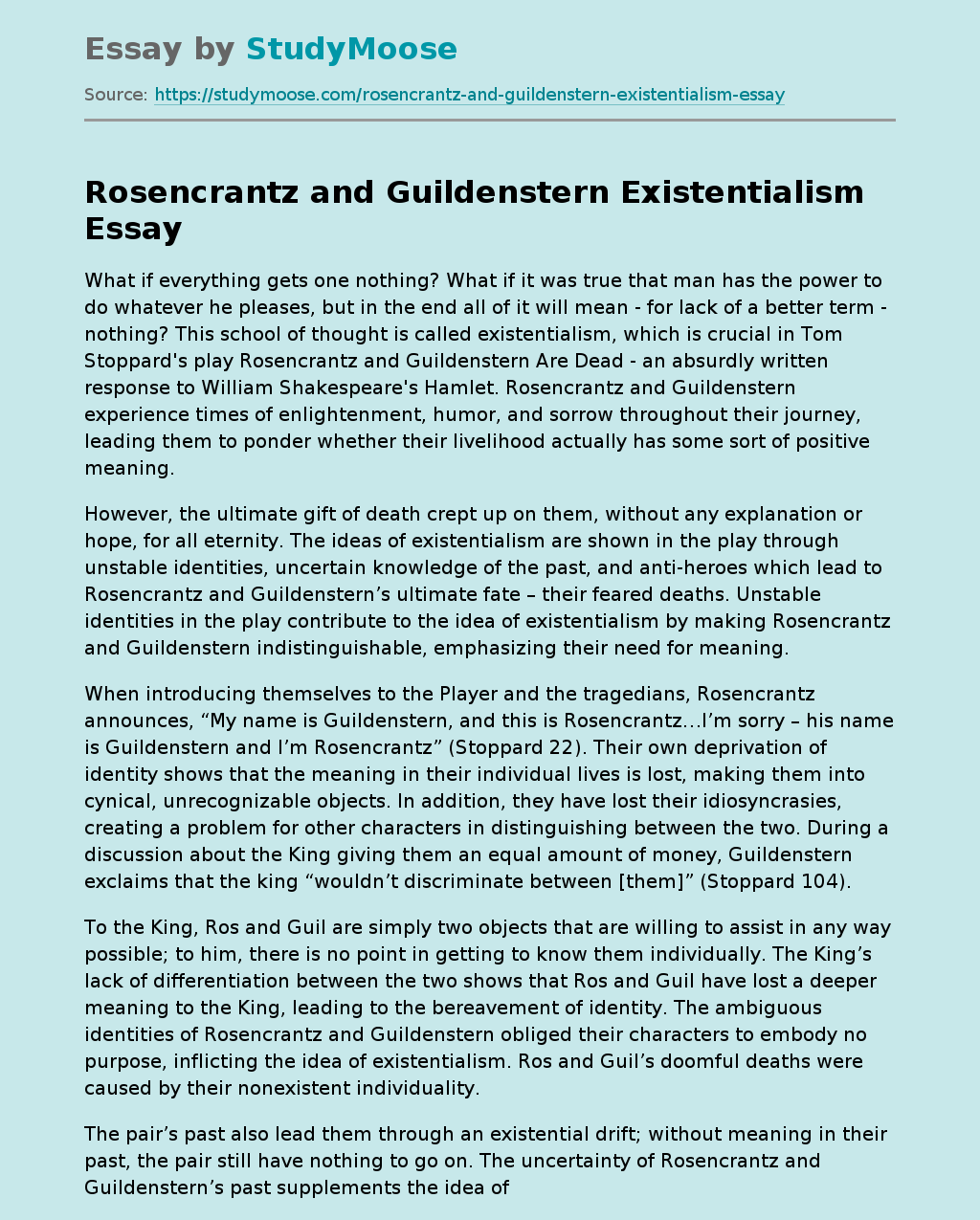