Similarities and Difference between Humanism and Existentialism

In the 20th century, psychology began to boom with different methods of therapy for individuals from many backgrounds. Along with these different approaches, many of them differed on specific viewpoints such as understanding one’s purpose in life. Two approaches that circle around this viewpoint are humanism and existentialism. These two approaches emerged before the 20th century, but modern day psychotherapy from these two approaches have influenced society to think about their purpose and role in the world.

Don't use plagiarized sources. Get your custom essay on
“ Similarities and Difference between Humanism and Existentialism ”
Get custom paper
NEW! smart matching with writer

As a school, humanism was founded before the renaissance era arguably by Friedrich Niethammer. The driving force for this school was a philosophical stance that emphasized the value of humans, individually and collectively. However, as time went on, humanism had formed humanistic psychology; which was founded by Carl Rogers in the 1950s, after the effects of World War II and concurrently with the Cold War between Russia and the United States.

At this particular time, society struggled with their identities and dealt with anxieties from the stresses of war. Rogers used this time to research individual personalities and which psychotherapies could help people come to understand their identities. In addition to his research, it influenced others, such as Abraham Maslow who coined self-actualization and hierarchy of needs.

In Rogers’ person-centered approach, he talks about how the central idea is an individual has within him or herself vast resources for self-understanding, for altering the self-concept, basic attitudes, and his or her self-directed behavior, which could all affect an individual’s attitude (Rogers, 1979). However, these resources must be attainable by the individual in a growth-promoting climate. In addition to this type of environment, Rogers emphasizes on three conditions: valuefree, positive acceptance of others, active, empathetic listening, and genuine self-expression in communication with that person (Orlov, 1992). These three principles set the foundation of his new approach to therapy, which will be contributed to his most important scientific discovery of the “necessary and sufficient conditions” for the personal change (Orlov, 1992). The conditions Rogers presents are applied in several therapies, which are person-centered therapy, learning-centered teaching, and cross-cultural relations (Rogers, 1989, Rogers, Lyon, & Tausch, 2013). Through these fundamentals and therapies of humanism, it fitting to see that individuals under humanistic therapy can achieve a meaning to their life.

When existentialism was founded, it took part in many different forms but it all came to one common understanding; in the view of the existentialist, a person’s beginning is described by disorientation, confusion, or dread in realizing of a meaningless world (Soloman, 1974). This approach took on many concepts such as the absurd, facticity, authenticity, angst and dread, and despair. Among these concepts, the first prominent existentialist philosopher, Jean-Paul Sartre explained that all of existentialism have in common is that existence precedes essence (Copleston, 2009). In other words, all individuals are independently acting and conscious beings rather than having labels or stereotypes attached to them. The point of existentialism is to reach the actual life, or true essence, instead of being a part of society’s status quo. Thus meaning that every individual has the ability to create their own morals or values, to determine a purpose to their life.

Humanism and existentialism are often considered to be hand in hand with one another. However, in concerning with which approach is better for people to achieve what their purpose will be humanistic ideas. The therapy in humanism is more catering to the finding a path to self-actualization rather than constantly being questioned an individual’s purpose.

Similarities and Difference between Humanism and Existentialism. (2021, Apr 26). Retrieved from http://studymoose.com/similarities-and-difference-between-humanism-and-existentialism-essay 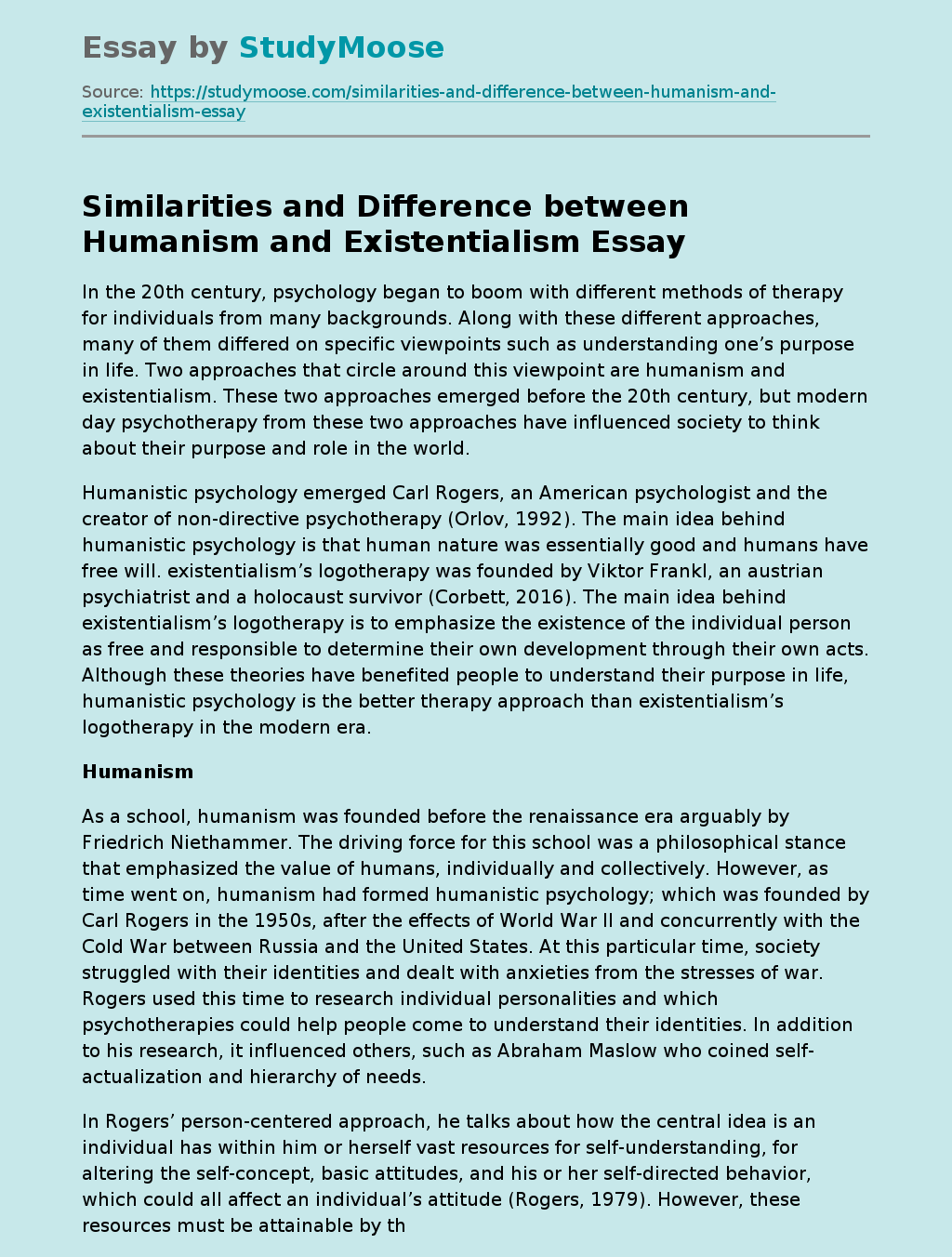