A History Of The Renaissance Period History

The Renaissance was a period in European history marked by a cultural flowering. The Renaissance is defined as the revival or rebirth of the arts. The home of the Renaissance was Italy, with its position of prominence on the Mediterranean Sea. Italy was the commerce capital between Europe and Eurasia, during this time period, from fourteenth and sixteenth centuries. Painters, sculptors, and architects exhibited a similar sense of adventure and the desire for greater knowledge and new solutions.

During the Renaissance, artist were no longer regarded as mere artisans, as they had been to the medieval past, but for the first time emerged as independent personalities, compared to poets and writers.

Don't use plagiarized sources. Get your custom essay on
“ A History Of The Renaissance Period History ”
Get custom paper
NEW! smart matching with writer

Many artisans merged mathematics with art, in order to become more precise in their measurements and to make sure an object was supported both rationally and proportionally. However, Renaissance artists also placed human concerns and feelings at the center of their works. Such optimism combined with intellectual curiosity and increasing worldliness made it possible for art to be valued.

Over all, the Renaissance art movement completely discredited the middle Ages as being dead both intellectually and artistically, thus rendering the Byzantine, Romanesque, and Gothic style art as being without value.

The Renaissance came from a revival of the Classical ideas, concepts, and knowledge. What had once been forgotten was once again the focus of society. It was also found that in Classical times artists enjoyed a much higher level of prestige than they did during the Middle Ages. Artists wanted to enjoy this status once again.

The Renaissance took place over a long period of time. Maybe this is an indication of its immense popularity both then and now. However, the Italian Renaissance can be divided into three distinct periods known as Early, High, and Late respectively. These stages were preceded by the Gothic art movement, which acted as a bridge between the middle Ages and the Renaissance, and was followed by Mannerism, which bridged the gap between the Renaissance and the Baroque. Mannerism hardly had an effect on the popular arts of the time and was not fit into the already neatly categorized art periods when historians looked back upon the era.

Early Renaissance art took up most of the 15th century and was characterized by inspiration from antiquity. The movement was focused in Florence, Italy because this local had brought attention upon itself through various conflicts within the church and with its neighbors. The art form focused on the human body, space, and the laws of proportion when it came to architecture. The belief was that progress and development were the backbone of the evolution and survival of art. The primary painter of the time was Masaccio. His work was religious in nature and his inspiration came not from other painters, but from the sculptor Donatello and the architect Brunelleschi.

High Renaissance art was characterized by creating physical presence, drama, and balance than on the behavior and personality that were the focus of Early Renaissance art. The major painters of the time were numerous. There was Leonardo da Vinci, Donato, Bramante, Michelangelo, Raphael, and Titian. This period was short lived, lasting from about 1495-1520 and served as a transitional period between early and late Renaissance. However, although brief, the art that flowed from this period was exceptional and some of the most famous artists ever produced work during this time. After all, these artists had such a command over their talents that they were able to produce any natural effect they desired and they had an intellect that allowed for balance and harmony along with fine detail, also was created a term for some of them, “Renaissance man”.

The term Renaissance man has come to mean someone with exceptional skills in a wide range of fields. The description applies to many people during the Renaissance, but there are two outstanding candidates for the title. They are Leonardo da Vinci and Michelangelo. The older man, Leonardo, is exceptional in that he excels in two entirely different disciplines, experimental science and the visual arts. But on the artistic side alone, Michelangelo must be the man. He creates works, all of the highest quality, in the four distinct fields of sculpture, painting, architecture and poetry.

The late Renaissance began with the sack of Rome in 1527. Artists had to scramble to relocate throughout Italy, France, and Spain. This period led to what is now called Mannerism. Mannerism artists turned to producing paintings of people, often nudes, that were portrayed in strange poses and looking somewhat grotesque while odd themes were used and emotion looked horrifying. Michelangelo was the only painter from the High Renaissance to make into the late period.

The growing emphasis on individualism during the Renaissance began a change of status for composers of music in society. Unlike their medieval predecessors, Renaissance composers were recognized more often during their lifetimes. The technology of printing permitted a much wider distribution of their works and enabled a larger public into the study of music. Even when spiritual music was still in a dominant position, secular music was becoming more common and its forms more cultivated than in the previous era. The repertoire of instrumental music became more varied, along with the invention of new instruments and many of the instruments of the period were improved.

Humanism is considered to be the most significant intellectual movement of the Renaissance. As its name implies, humanism was a philosophy that was characterized by blending concern with the history and actions of all human beings, and their influences on the world with religious duty. Prior to Renaissance thinking Medieval Europe considered life to be sinful that people should only be concerned about their duty to God and the afterlife. The humanists thought that every person has respect and worth and therefore should command the respect of every other person. The humanistic movement began during the early Italian Renaissance with the rediscovery of the writings of classical Greeks and Romans, which were not only models of literary style, but considered to be guides to the understanding of life.

The Renaissance movement ushered in the use of oil paints. This was a boon to artists as, due to the slow drying time of oil paints, they could edit their paintings, making adjustments over a period of months. They could now focus more on the quality of light on their paintings and were also more in tune with the architectural accuracy of the buildings in the background of their work. Themes centered on Greek and Roman mythology as well as Biblical characters and the Madonna was a pre-eminent figure. When it came to depictions of the human body, emphasis was often put on the nude form and the perfection of the body.

Another important result of the Renaissance was that painters began to communicate more with poets, essayists, philosophers, and scientists. The boundaries between these disciplines began to blur and they began to share ideas with one another and recognized one another for the visionaries they truly were.

What caused this rebirth of the visual arts is still unclear; the fourteenth century in Europe witnessed several catastrophic harvests, the Black Death (1346), and a continuing war between England and France. Hardly ideal conditions for an eruption of creativity let alone a sustained birth of paintings, drawings, sculptures and new buildings. Moreover, the Church, the biggest patron of the arts, was racked with disagreements about spiritual and secular issues.

Prosperity was also coming to Northern Europe, as evidenced by the establishment in Germany of the Hanseatic League of cities. This increasing wealth provided the financial support for a growing number of commissions of large public and private art projects, while the trade routes upon which it was based greatly assisted the spread of ideas and thus contributed to the growth of the movement across the Continent. Allied to this spread of ideas, which incidentally speeded up significantly with the invention of printing, there was an undoubted sense of impatience at the slow progress of change. After a thousand years of cultural and intellectual starvation, Europe and especially Italy, was anxious for a re-birth.

Over all, the Renaissance produced some of the most well known art ever created in human history. It was a time of revival, of going back to something form the past that worked and bringing that past into new light. After more than five hundred years we still marvel at the works of artists such as Da Vinci and Michelangelo. Humanism downplayed religious and secular dogma and instead attached the greatest importance to the dignity and worth of the individual. This period was unique in its portrayal of the human body and in its enmeshment of art and science. It was proof that the old and the new can come together in harmony.

A History Of The Renaissance Period History. (2019, Aug 19). Retrieved from https://studymoose.com/a-history-of-the-renaissance-period-history-essay 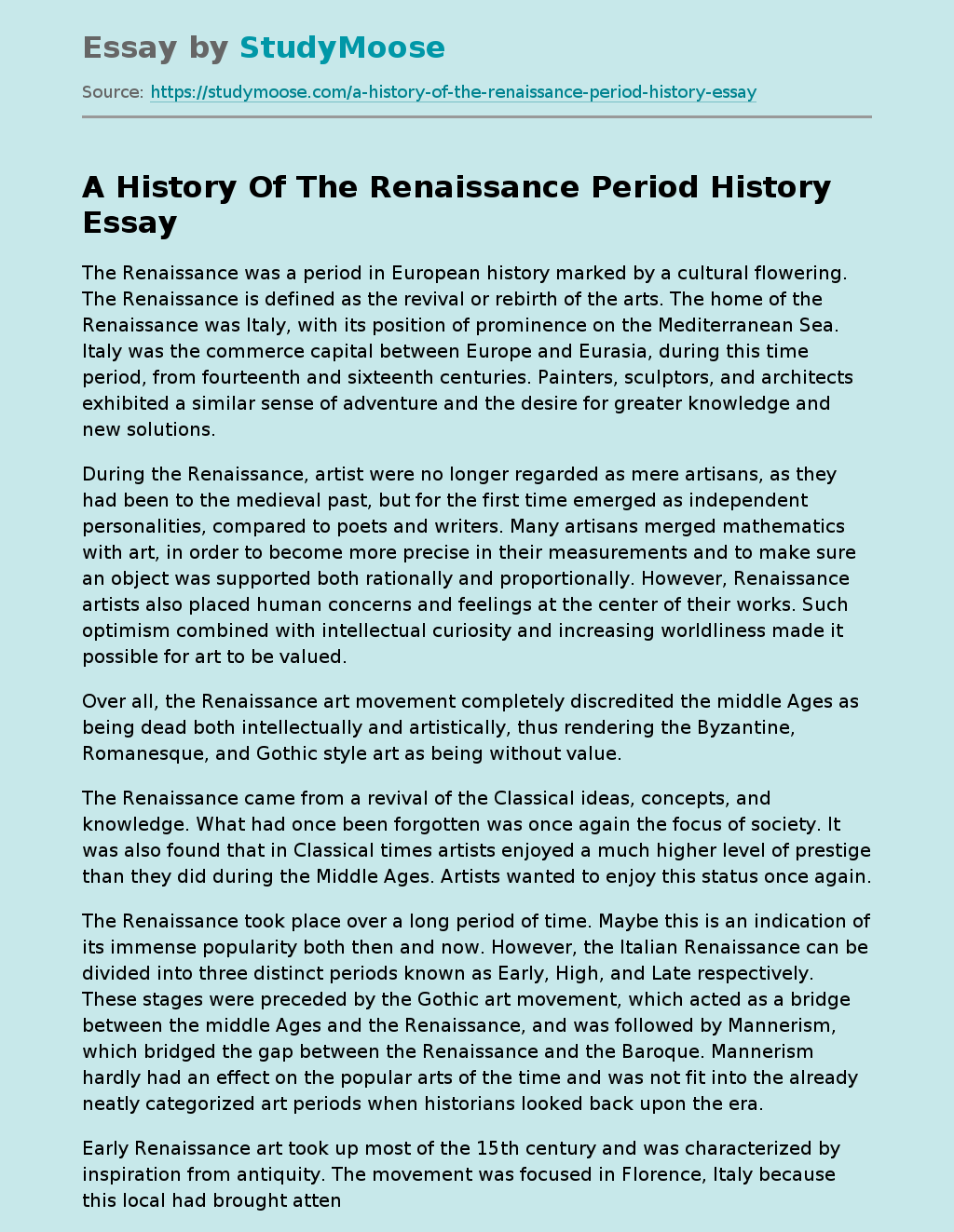