How did Charlemagne Build and Govern his Empire?

Charlemagne was one of the most successful rulers of his time period. How did he build and govern his empire the way he did? He used a combination of his personal charisma and intelligence, the feudal system, the Church, and war in order to create the greatest Empire since the time of the Romans. His dislike of corruption, and his power in battle all contributed to his success as Emperor.

Charlemagne himself was the key to his own success. He himself was a charismatic man, with an incredible amount of vital energy, and a desire to do well.

Turn in your highest-quality paper
Get a qualified writer to help you with
“ How did Charlemagne Build and Govern his Empire? ”
Get high-quality paper
NEW! AI matching with writers

An example of this was that he studied a lot, and made “heroic efforts” to learn to write, according to Einhard, his biographer. As we will see later on, education was a major part of Charlemagne’s regime. He also was an honest and normal person, and disliked the regal trappings of his court. When at home, he would generally wear simple clothes.

Charlemagne tried to preserve the commerce in his Empire-to-be, for he felt that trade was important, because the money that it generated helped the people live better and more comfortable lives. He made laws and decrees, by which “the fairs were protected, weights and measures and prices were regulated, tolls were moderated, and roads and bridges were built or repaired” (Duran, 465). He also protected the Jews for the same reason: they were the only link between his Empire, and that of the East, whose trade he needed.

He also attempted to fend off the onslaught of serfdom; the circumstances, and the declining economy in Northern Europe, thwarted him.

He believed that people should not be kept against their will, and so the facts that serfdom blossomed, and that even slavery appeared for a while, vexed him.

Education was an integral part of Charlemagne’s court, his regime, and his life. He studied very much and even composed a German grammar. He studied Latin as well, but kept speaking German at his Court. He built up a large school in Aachen, his palace, because he was appalled at the level of illiteracy in his Empire. The university of his palace contained many scholars, like Alcuin.

He built schools all over France, in Tours, Auxerre, Pavia, St. Gall, Ghent, and other places (Duran, 466). He also had to import teachers from Ireland, Britain and Italy in order to supply the schools and universities. Most of these institutions were monastic, or related to monasteries. Out of these schools came the great universities of Europe. Many people wrote poetry as well during this time. This essay was written by Daniel Cook. However, this wasn’t a real literary and scholastic revolution, simply a revival in interest.

This revival was partly due to the invention and use of a new script, Caroline Minuscule, invented by the scholars at Aachen. Caroline miniscule involved both capital and lowercase letters, and closely resembles the “Times New Roman” font today. It was effective because it allowed for more legible books, written on less paper, more efficiently. Also it was easier to write than some other scripts like “Merovingian majuscule”, which only had one case. Therefore, books could also be copied faster and more accurately. Although this use of a new script is not very significant in itself, it had great effects. Since book production increased, so did learning throughout the Empire.

He was loath to leave any part of science or culture unexplored. He wrote a German grammar, and collected early specimens of German poetry. He was said to have a “clairvoyant intelligence” (Doran, 470). It was he, for example, that gave the four winds the names they still bear today. Therefore, this application of his to good rule and study, complemented by his extraordinary personal energy, made for a great ruler.

Charlemagne inherited the feudal system from his ancestors, first Clovis and then Charles Martel. It was built on a system of vassalages and allegiances, in exchange for land. The Emperor would give land to his vassals, in exchange for their services as warriors. They each had to have a certain complement of warriors ready at all times for the Emperor to call to war. To do this they in turn took on vassals, who in turn took on vassals, etc. Therefore it was a hierarchy, starting with the emperor, and ending with the peasants, who were the majority of the population.

The fact that it is a hierarchy, with one allegiance after the next, means that everyone in the end is loyal to the King. And indeed, a Knight’s (the mounted riders that composed the nobility, and that were the mainstay of the army) first allegiance was to his King, and then his Lord. His family came last. Because everyone was loyal to the one above him, and he was the top, everyone was loyal to him. Therefore, even though he himself didn’t really own much land anymore, he still had the loyalty of all of the army.

In government, there is also the matter of law. Charlemagne was aware of this issue, and addressed it by writing a Magna Carta. He (his court scholars) wrote it for the people. It’s capitularies were to protect the common people from the power of their lords and king. It also defined what a worthy king was. However, it wasn’t a clear and setout body of law like our constitutions are today, but instead was built up on the old German customs and traditions

He also declared several laws regulating weights, measures and prices, because he was trying to keep the trade economy going. He also decreed laws to protect the Jews: they were the only remaining trading link between the East and the West, and were essential to the state’s income.

To help him govern, he also employed the aid of the Missi Dominici. They were essentially Charlemagne’s police. They checked up on all of the counts and other officials, and tried to prevent corruption. All local administration was subject to them. They conveyed Charlemagne’s wishes to local officials, and reviewed the officials’ actions, judgments and accounts.

They keep people loyal. They prevent corruption. They prevented bribery, extortion, nepotism, and exploitation. They protected “the Church, the poor, and wards and widows, and the whole people from malfeisance and or tyranny”. (Duran 464). They give status reports on the Empire in general

They were generally friends of the Emperor (so that he could trust them), or very minor sons of very minor nobles. They were circulated around the different civitas , or counties, about once a year, and were never allowed to serve as a Missi in the area where they were born (or the surrounding areas, for that matter).

“Charlemagne was profusely generous to the Church; at the same time he made himself her master” (Duran, 467). He used the clergy as tools of education, and the Church’s doctrines as instruments of government. In return, he gave the church gifts, both land and money. Empire is divided into counties. Spiritual matters were governed by an (arch) bishop, and secular by a count. Charlemagne was very closely linked with the church. He had a death grip over it, and it had one over him. They complemented each other very well, and each needed the other in order to function.

He would send many directives to the Church and to the Clergy, and would require each priest to send him details of how they performed baptisms and marriages. He also tried to regulate the priests’ exploiting the people by preaching damnation and hellfire if they didn’t “donate” (pay up). The Missi Dominici were also allowed to enforce these laws. Despite the fact that he was very Christian, he considered the Church under his authority, and himself under God’s. He would constantly send the bishops and priests directives, and tell them what to preach. He would ensure that the Church never said anything against him, and indeed that it would laud him as a man of God.

Charlemagne was an effective leader in war, and went on over 50 campaigns in his lifetime. (If you consider that he lived for seventy-two years, it means one per year between the ages of 16 and 66 years old!). He managed to conquer and annex the greatest amount of territory since the Roman emperors, and his empire was the largest amount of land under the control of one man since the time of the Romans

He did this using the system of mounted cavalry developed by his ancestor Charles Martel and refined by his predecessor Pepin Le Bref. The feudal system was implemented to this effect, and as a result he had a large number of horsemen at his disposal. They were all trained and effective knights: he had an awesome army. When he conquered new territory, he would offer the current inhabitants a choice: to either convert to Christianity, or to die. Some entire peoples were wiped out because of their faith to their gods. Others chose to convert, fearing merciless deaths by the swords Charlemagne’s soldiers

The combination of all of these things enable Charlemagne rule and govern an effective and efficient empire. His own charisma as a ruler was key to his success. But the government that he inherited from his ancestors was also important, as were his modifications of it. Education was a major part of Charlemagne’s regime, and he is partly responsible for the beginning of the renaissance. The Missi Dominici were also a major part of his rule, enabling him to keep corruption at bay. Finally, the Church and his alliance with it, and his ability in warfare, were indispensable in building and governing his Empire.

How did Charlemagne Build and Govern his Empire?. (2016, Jun 20). Retrieved from http://studymoose.com/how-did-charlemagne-build-and-govern-his-empire-essay 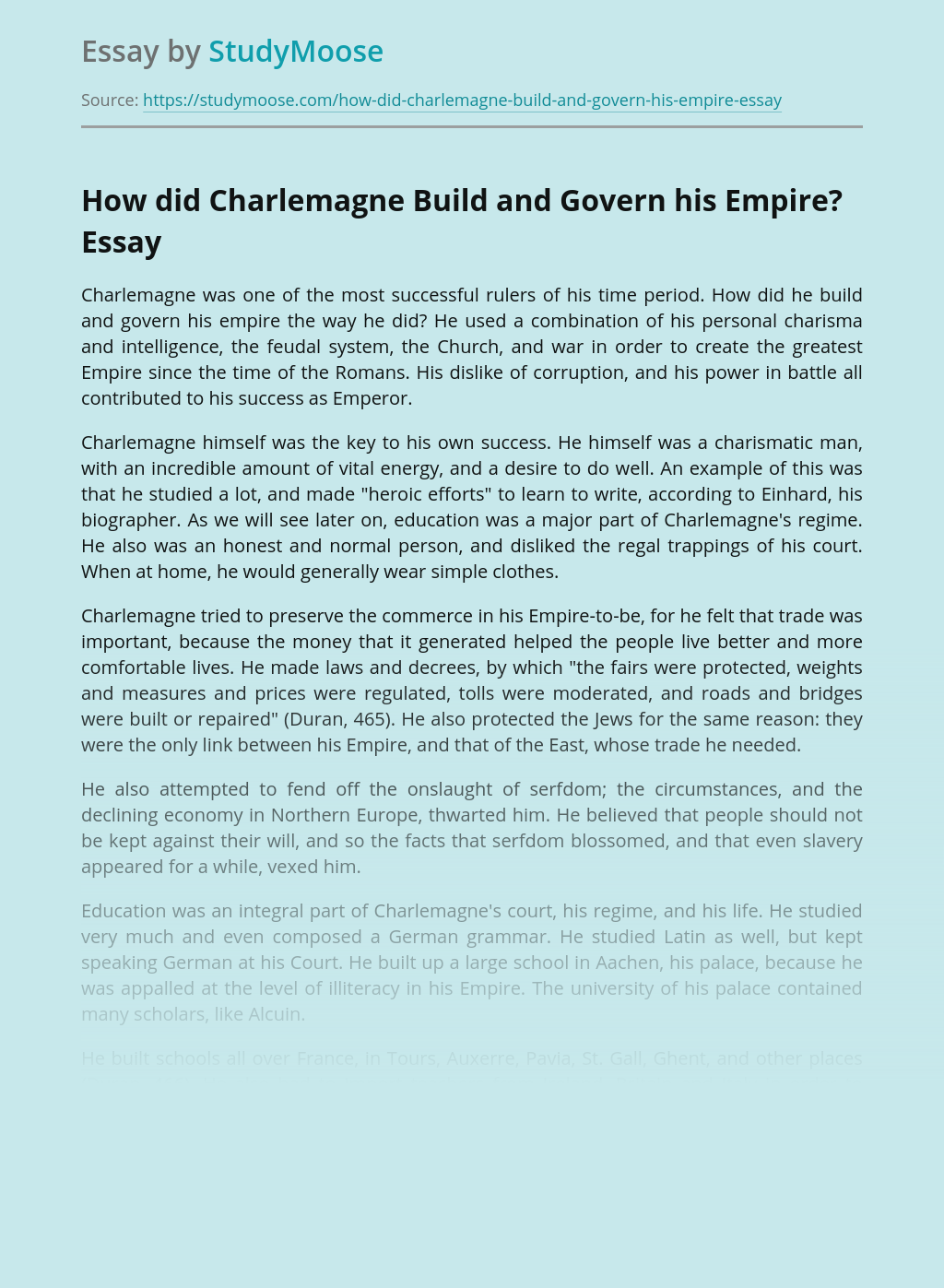 Turn in your highest-quality paper
Get a qualified writer to help you with
“ How did Charlemagne Build and Govern his Empire? ”
Get high-quality paper
Helping students since 2015
Stay Safe, Stay Original