A monopoly can be defined in many ways. According to the research that I have done, a monopoly in my own words is a company or a group that owns all or almost all of the market for only a given type of product or service. Absence of competition is what typically leads to the formation of a monopoly which results in high prices and subordinate products. The history of monopolies itself goes way back to the colonial times. Monopolies are great economic powers that have had positive consequences to the United States of America.

Don't use plagiarized sources. Get your custom essay on
“ Andrew Carnegie and Monopoly ”
Get custom paper
NEW! smart matching with writer

Andrew Carnegie is a great example of an American Industrialist who made a vast fortune in the steel company by monopolizing. As a little boy growing up, Carnegie went from “Rags to Riches” in a short amount of time for a man of his background. As his first job he worked in a Pittsburgh cotton factory in which he rose to the position of division superintendent of the Pennsylvania Railroad in 1859.

While he was working on the railroad he invested in different daring risks like oil and steel companies.

By the time he was 30 he made his first fortune. Around the 1870s he entered the steel business and over the next two decades became a dominant force in the steel industry for America. In 1901 Carnegie sold the Carnegie Steel Company to banker John Pierpont Morgan for $480 Million. He later devoted himself to philanthropy, eventually giving away more than $350 million. By the 1870s, Andrew Carnegie cofounded his first steel company near Pittsburgh where in the next few decades was able create a steel empire.

He did this by maximizing profits and minimizing inability through ownership of factories, raw materials and transportation of any framework of any steel making involved. In 1892 his primary holdings were combined to form Carnegie Steel Company. Andrew Carnegie considered himself a champion of the working man due to success in becoming the largest manufacture of pig iron, steel rails and coke in the entire world. His process of obtaining complete control in the steel industry was very simple.

To start his company off, Andrew Carnegie built modern steel mills so that steel could be produced faster than gained control of iron ore mines and coal mines which were the raw materials used to make steel and lastly, bought railroads and shipping companies that were used to transport iron and coal from nines to the factories.

His process controlled everything possibly needed to make steel. Carnegie was able to make steel more quickly and for a cheaper price. Other companies unable to compete and went out of business leaving Andrew Carnegie on top of the Steel Industry in America and parts of the world. Andrew Carnegies Steel Company is considered to be a monopoly because he was able to raise the quality of steel while reducing its price by using technological innovations. By doing this he created a vertical monopoly in the steel industry. Vertical Monopoly is when you decrease transportation expenses and reduce turnaround time and that is what Carnegie did. He took control over every level involved in steel production from raw materials, transportation and manufacturing to distribution and finance.

The steel industry in America was booming since railroads were being built and railroads required thousands of miles of steel tracks. He was one group who had the right to produce and sell all of something which in this case is steel. By 1897 he controlled almost all of the steel industry in the United States with the power to control the prices in the steel industry and running other companies out of business thus leaving his company the only company to go to. In the next four years of his life Carnegie Steel merged with US Steel to become the largest company in existence at the time.

Carnegie was believed to be a champion of the working man but his reputation as a charitable employer and champion of labor was damaged after the violent labor strike in 1892 at his Homestead Pennsylvania steel mill. During the time that the Homestead Strike began conflicts between labor and management was popping up all over the country not only Homestead, Pennsylvania. The cause of the Homestead Strike at Carnegies Steel Company was believed to be due to the decline of steel products which dropped from $35 a gross ton to $22 early around the 1890s.

The workers would have had the rights to protest and government action would have been taken but at this time industrialization was booming and nothing was being taken care of unfortunately. Although Andrew Carnegie faced several lawsuits and different controversy he impacted the American Industrialization in the 1800s till today. Railroads were considered the nation’s first “big business” at the time and the resources needed to build the nationwide network led to growth in other industries such as coal and steel. Industrialization Era was booming. It raised an overall standard of living for most people.

Sharper economic divisions between the rich, middle class and the poor were created. For his last years alive, Carnegie spent it as a philanthropist. A philanthropist is an individual who voluntarily donates money or good and provide some other support to a charitable cause. His attention was turned from his business life to helping the public in any way that he could. After retiring in 1901, Carnegie made it an obligation to give his money back to others in society. He already had made some charitable donations before his retirement but after that time, giving money became his new occupation.

He spread his wealth to scientific research, education and reading, libraries, colleges, and world peace causes. By 1911 Andrew Carnegie had given away about 90% of his fortune. His life seemed to be touched by magic. He embodied the American dream completely. A little boy emigrated from Scotland to the United States of America went from rags to riches. He was a self-made man who used vertical monopoly to become successful and eventually becoming the captain of industry. The King of Steel himself impacted the US economy and helped form what America is today. 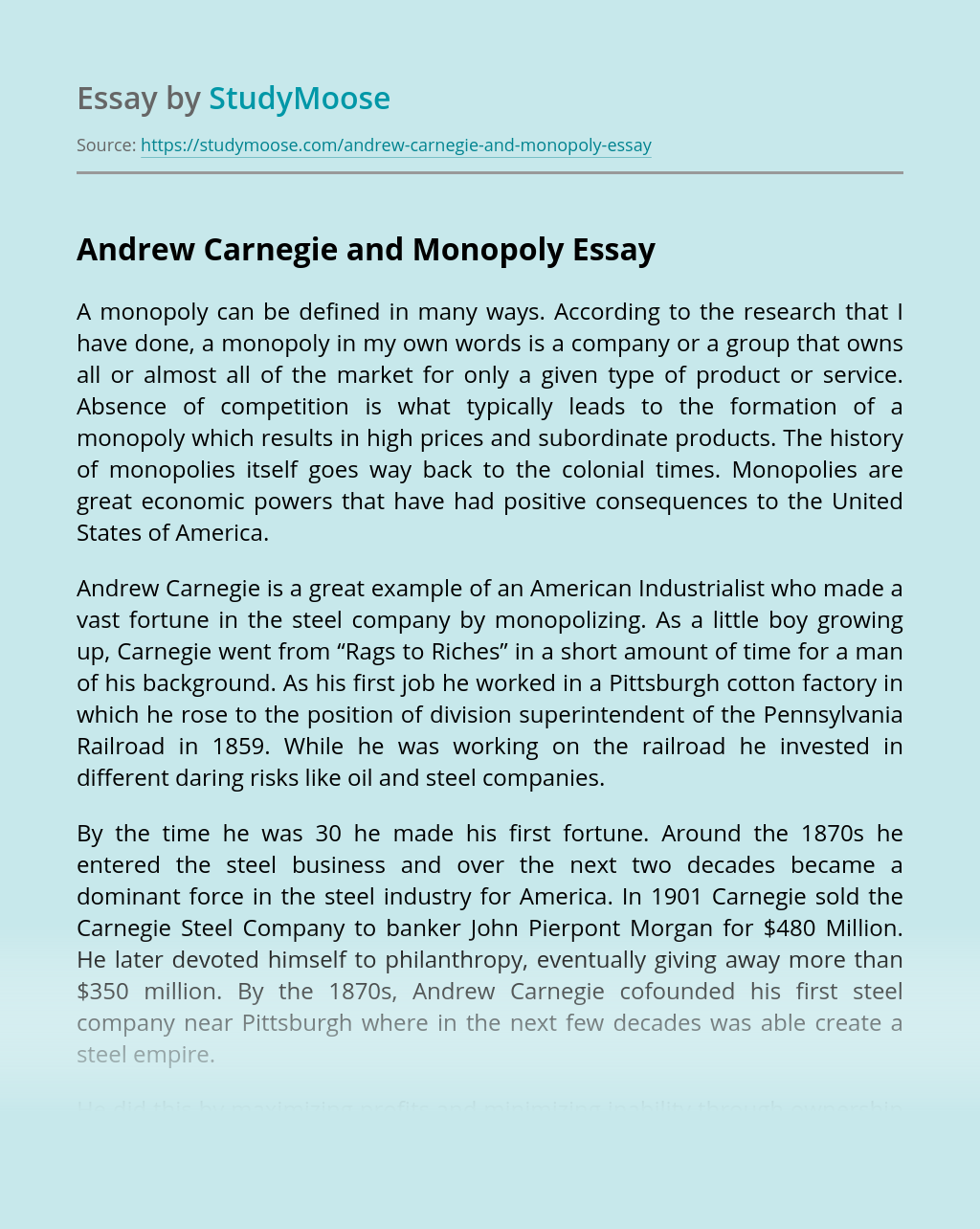