A Historical Criticism of Andrew Carnegie

Andrew Carnegie is a legend in industry. He was He was born in Scotland in 1835. He came to America and started his working career in a cotton mill as a bobbin boy. He was a hard worker, and quickly was promoted through the ranks of Western Union and the Pennsylvania Railroad Company. In 1865, he quit and started his own business, the famous and notorious Carnegie Steel Company. His company was responsible for starting the steel industry in Pittsburgh, and he and his company left their imprint on industry and big business for years to come.

Don't use plagiarized sources. Get your custom essay on
“ A Historical Criticism of Andrew Carnegie ”
Get custom paper
NEW! smart matching with writer

He retired at the age of 65 and sold his company to J.P Morgan for 480 million dollars.

Carnegie has been shown as a cutthroat businessman and his company as a ruthless monopoly in the history books, yet he was also a philanthropist who donated over $350 million during his lifetime. He founded and supported many libraries that are still used today. He wanted to help those who had fallen upon hard times and misfortune without giving them handouts, because “you cannot push anyone up a ladder unless he is willing to climb up a little.

” (Carnegie) Instead, he put the opportunity within reach. “Carnegie’s philanthropy was intended to empower ordinary men and women by making knowledge and ideas conveniently available to them. He is best remembered for providing the financial incentives to build almost two thousand free public libraries across the United States.” (Paytonpapers.org)

Though he is known as a cutthroat businessman, there are few that will speak badly of him.

Though he systematically put competitors out of business, he also helped schools and built libraries for mill towns to help people lift themselves out of poverty. “He established in the Scottish Universities a trust of $10,000,000 for assisting boys of slender income to avail themselves of University training, or, to quote his own words, “by rendering attendance at these universities and the enjoyment of their advantages more available to the deserving and qualified youth of that country to whom the payment of fees might act as a barrier to the enjoyment of these advantages.” (Lynch 26) He helped communities help each other, and is compared by many to the public servant and founder of the hull house, Jane Adams.

Despite all his good, there are certain things that Andrew Carnegie did that are inexcusable. The working conditions in his factories were atrocious. In addition, his payment system was racist and unfair. “By 1907, 80 percent of Carnegie’s steelworkers were Eastern Europeans. Carnegie’s native-born whites received $22 per week. His Irish and Scots received $16 per week. Slavs, Russians, and Italians received $12 per week.” (endgame.org) He paid native-born Americans more than anyone. However, the native-born Americans were probably more skilled and better trained than the immigrant workers were. However, there is no explanation to why he paid Slavs, Russians, and Italians less than the Irish and the Scots, other than pure prejudice and bias towards his home country.

In business, he instituted practices that are still in place today (though some of them are now highly illegal). Unlike the conventional wisdom, he believed that you “put your eggs in one basket. And watch it grow. That’s the way to make money.” (Carnegie) He pioneered the idea of vertical integration, which is the idea of buying all suppliers and service providers for your area of industry.

He bought all the suppliers and service providers for the steel industry. He then systematically put his competitors out of business by using practices that would be considered highly illegal by today’s standards, and was probably not illegal then only because no one had thought of an idea so deceitful. “Carnegie’s investment in the steel industry first led him to Union Iron, which worked in conjunction with the Keystone Bridge Company . . . in 1883, Carnegie bought the Homestead Works Company, and he soon became acquainted with Henry Frick’s coke company to continue his growth of vertical integration.” (Yargar 1) He now controlled prices of the suppliers, and would sell his products below cost.

Because he had the same amount of profit because he controlled the suppliers, he still made huge profits while his competitors folded. His close ties to the railroad industry as a young man also helped his company triumph over others. Because he produced his products in bulk and shipped his products in bulk accordingly, he was able to obtain kickbacks from the railroads in the form of rebates. Many small companies were not able to get the same deals as him for shipping, and according lost money. This and his vertical integration caused him to have an almost complete monopoly over his industry by forcing smaller, independent companies into bankruptcy. A good analogy would be fighting a guy wearing full body armor and padding, and that has the support of 50 other people.

Carnegie’s ideas and practices, whether you believe them to be selfless or ruthless, have changed the course of business practices and education forever. Though he furthered the spread of education and helped those confronted with misfortune, his cutthroat business practices kept down many of the same people he was supposedly helping to achieve.

Lorenzen, Michael. Andrew Carnegie and His Charity Towards Libraries.

Payton, Robert L. The Impact of Individuals on Philanthropy in America. Paytonpapers.com

A Historical Criticism of Andrew Carnegie. (2016, Jun 19). Retrieved from https://studymoose.com/a-historical-criticism-of-andrew-carnegie-essay 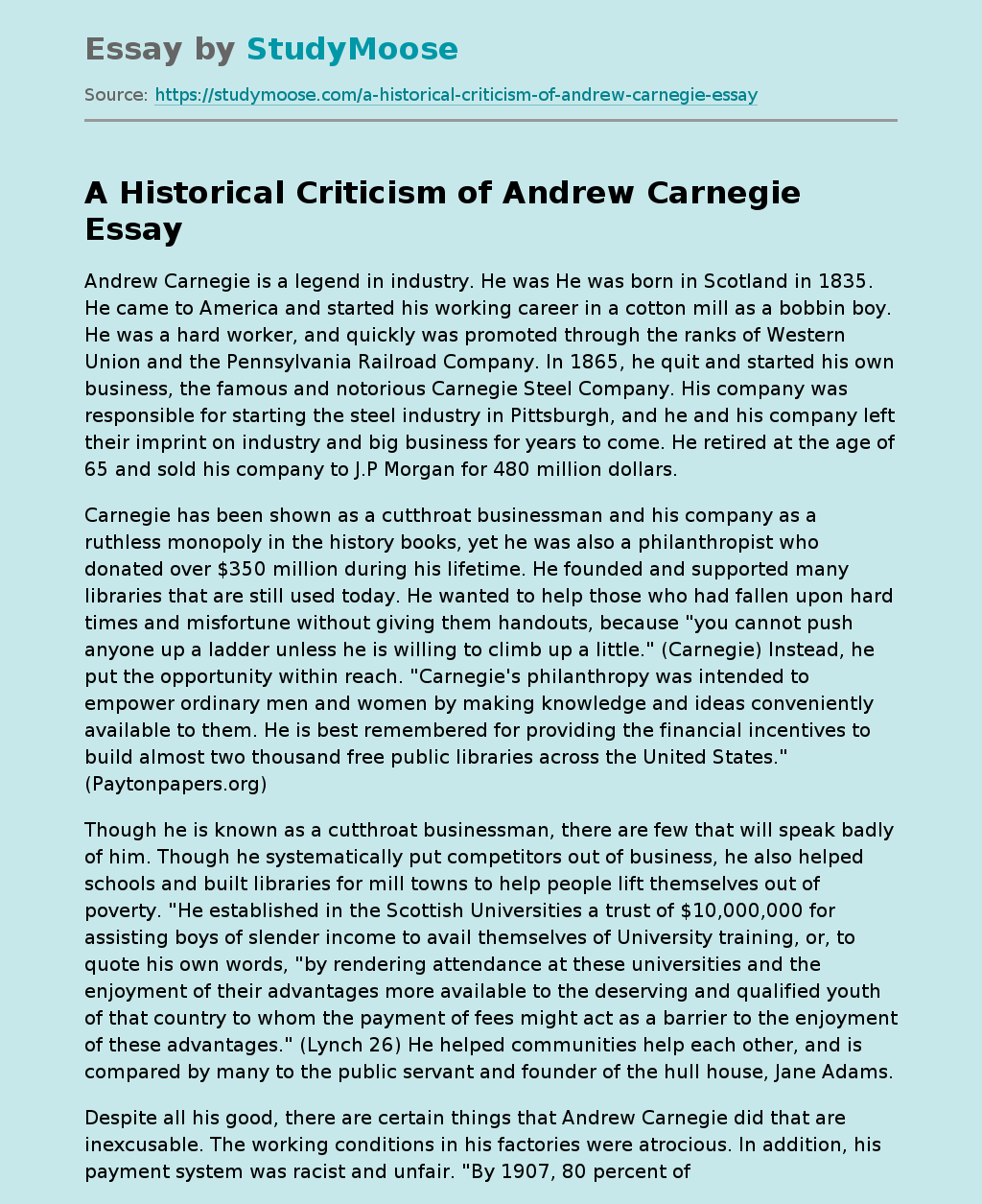