Andrew Carnegie once said, “No man can become rich without enriching others.” The U.S. was between wars, inventions, technology, and also successful movements with one another. As business offered the best chances, certain people became well known, due to what they created. For example, Thomas Edison; who invented the light bulb had become “famous” along with other well known people. The “king of steel,” Andrew Carnegie; was a true hero known to mankind. Andrew Carnegie was born in November 1835, in an attic room in Dunfermline, Scotland.

Don't use plagiarized sources. Get your custom essay on
“ Andrew Carnegie – Villain or Hero? ”
Get custom paper
NEW! smart matching with writer

His family and he grew up poor. Andrew, never lived the rich life when we was a child. He always had to work his way through life, just to get money for his family; to survive. His working life began when he was twelve-years-old, started from a local textile mill and ended up becoming a business man. As Andrew began his life in the mill steel in his early twenties, he began to become wealthier day by day.

Andrew Carnegie was a hero to all people in the country. He, himself, created millions of jobs for people all over the industry markets. Carnegie gave people jobs from all ages to earn money for their families. As business began to rise, competition began to form. According to (Doc B) competition is good for all races. Competition brings the best out of each department that competes against each other; it insures the survival of every business. Andrew Carnegie knew how to play the game, therefore he never went out of business but because of him he helped people get advancement technology and better quality items for a reasonable price (Doc B & D).

Since, Carnegie was a competition to all steel business’s he helped people to be able to purchase better things for a cheaper price, which made him a hero for all people.

Andrew Carnegie said, “There are but three modes in which surplus wealth can be disposed of. It can be left to the families of the decedents; or it can be bequeathed for public purposes; or finally, it can be administered by its possessors during their lives…” (Doc M). This quote simplifies the different ways there are to give back to the world, which is exactly what he did. As years passed by, Andrew sold his company and was left with millions of dollars to spare; he donated most of his money to many movements in the country such as Princeton University to create Lake Carnegie for rowing, TIAA (teachers insurance and annuity assoc.) and many other organizations (Doc N).

“The millionaire is entrusted for the long time being with a great part of the increased wealth of the community because he can administer it for the community far better than it could or would have done itself. (Doc P).” This quote reflects on how Andrew is thinking about how his money can be ten times more useful for other things than to keep it all to himself. Carnegie’s foundation is still donating money to all places of organizations in America and in Scotland. His foundations have still been active for more than two hundred years and still counting. Andrew changed people’s lives for the better; he made people have a better view of the business world in the late 1800’s. The “king of steel” was the world’s richest millionaire in history of lifetime gave back to the world. Overall Carnegie was a U.S. hero that made America a better place, for us to live in. 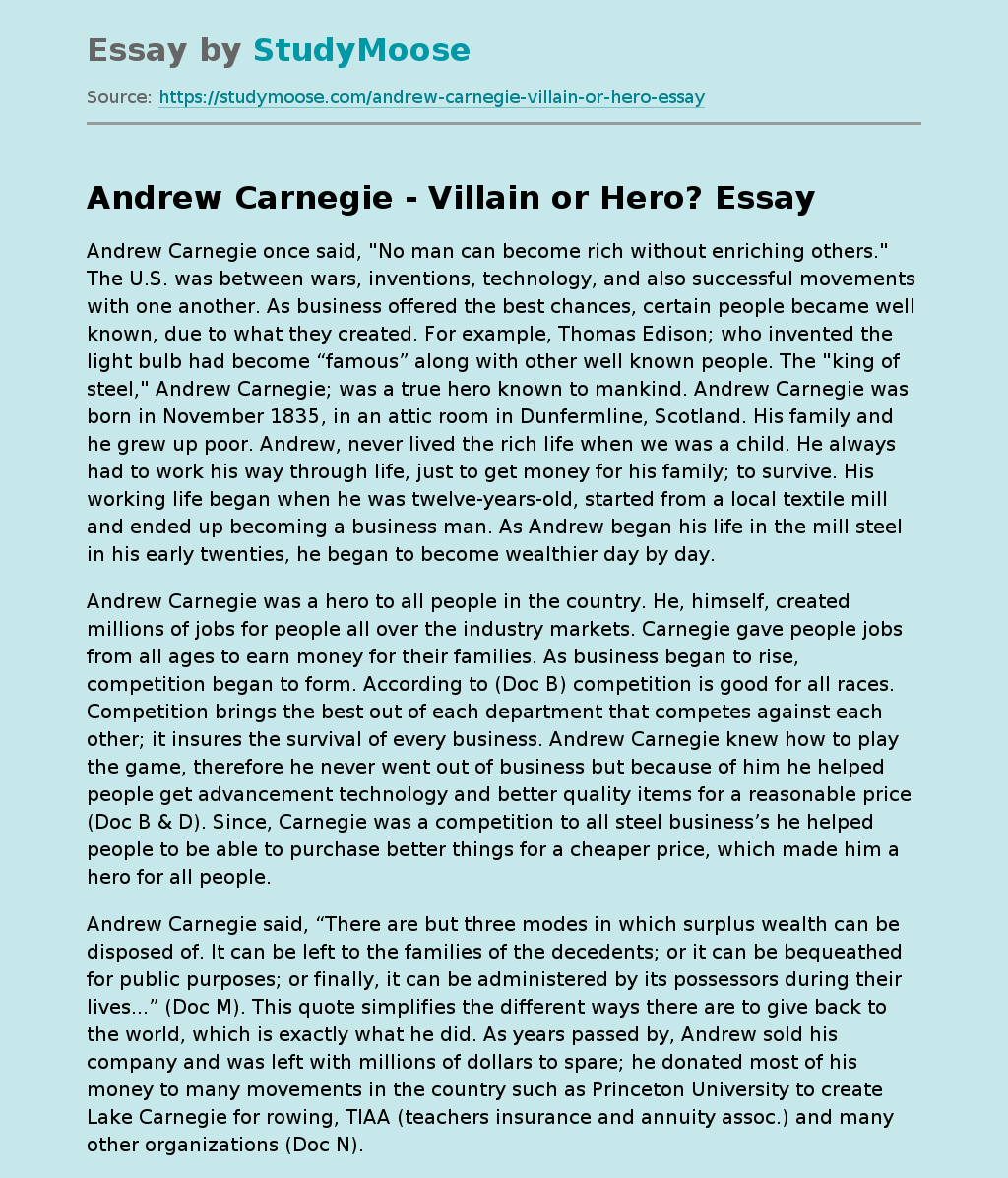