Gatsby is more of an anti-hero than a hero

Gatsby is more of an anti-hero than a hero. With reference to appropriately selected parts of the novel, and relevant external contextual information on the nature of the hero, give your response to the above view. Gatsby is one of the most complex literary characters of the twentieth century, and certain critics believe that he would be better described as an anti-hero than a hero. Contrary to a regular hero, anti-heroes often exhibit misplaced values, involvement in crime, dubious morality and egotism.

Don't use plagiarized sources. Get your custom essay on
“ Gatsby is more of an anti-hero than a hero ”
Get custom paper
NEW! smart matching with writer

I believe that Gatsby certainly fits this description, and in examining why a good place to start is his egoism. Gatsby is a fundamentally self-centred character who will sacrifice anything to attain his dream. He has the best of everything. He has everything except the one thing he actually wants, Daisy: “Gatsby bought that house so that Daisy would be just across the bay. ” His desire has deluded him, and he seems to lack regard for Daisy’s feelings.

When Nick warns him that he is expecting too much of her, he responds, “”Can’t repeat the past? he cried incredulously. “Why of course you can! “” This close-minded outlook is typical of an anti-hero; a conventional hero would have more consideration of others. Like many anti-heroes, Gatsby displays traits of psychological egoism. Psychological Egoism is the belief that each individual should seek as a goal only that individual’s own welfare. The idea here is that an individual’s own welfare is the only thing that is ultimately valuable for that individual.

Such is the case with Gatsby and his dream.

Gatsby seeks his own pleasure even in what seem to be acts of altruism. With egoism, when people choose to help others, they do so ultimately because of the personal benefits that they themselves expect to obtain, directly or indirectly, from doing so. On the surface Gatsby may be altruistically trying to rescue Daisy from a difficult marriage, but in reality he only wants her to satisfy his own lust. This makes him a typically egocentric anti-hero. Further support for this proposition can be found when we consider that Gatsby has very loose moral standards.

The story of The Great Gatsby essentially boils down to a man trying to steal another man’s wife. Wolfsheim tells Nick that Gatsby is a man of “fine breeding” who would “never so much as look at a friend’s wife,” however this turns out to be a false assertion. Gatsby is every bit as sexually immoral as Tom. The fact that Daisy has a husband is a minor concern for him: “He wanted nothing less of Daisy than that she should go to Tom and say: “I never loved you. ” After she had obliterated four years with that sentence they could decide upon the more practical measures to be taken.

The morally ambiguous anti-hero is a common character archetype that has been around since the comedies and tragedies of Greek theatre. Unlike the traditional hero who is morally upright and steadfast, the anti-hero usually has a flawed moral character, just like Gatsby. The moral compromises he or she makes can often be seen as the unpleasant means to an appropriately desired end. Lax moral standards are common with anti-heroes, so therefore it is logical that Gatsby is better described as an anti-hero rather than a hero.

Furthermore, perhaps the strongest argument for Gatsby being an anti-hero is that he is a criminal. Fitzgerald hints at the unglamorous reality of Gatsby’s life several times in the book, even from the rumours spread by his party guests: “Somebody told me they thought he killed a man once. ” Later on in the novel Gatsby’s own behaviour when Nick asks about his business suggests that he is not as pure as he likes to appear: “I think he hardly knew what he was saying, for when I asked him what business he was in he answered, “That’s my affair,” before he realized that it wasn’t the appropriate reply. This web of secrecy and deceit suggests that Fitzgerald intended Gatsby to be interpreted as an anti-hero. Gatsby’s shady business is likely related to prohibition and the bootlegging of alcohol. This was a very common crime in the 1920s, and bars that sold alcohol were referred to as ‘speakeasies. ’ An example of an affluent bootlegger is Al Capone. Within 2 years, Capone was earning $60 million a year from alcohol sales alone. However, his life was not a glamorous affair; he was caught and spent 11 years in jail. Capone, like Gatsby, is morally ambiguous.

Al Capone was seen as hero to many in Chicago because he operated soup kitchens to win the public’s favour. This is just like how Gatsby’s parties act as a public facade to hide his true identity. Gatsby never went to jail – he got a life sentence instead. In light of this blatant criminality, it perplexes me that anyone could claim that Gatsby is a traditional hero. Those that oppose my view claim that Gatsby fits a more traditional description of a hero. Qualities associated with heroes include strength in the face of adversity, vitality, resourcefulness and individuality.

There may be some merit to this opinion, especially if we consider that Gatsby is the quintessential caricature of the tragic hero. In tragedy, the hero’s downfall is due to combination of external circumstances and internal flaws. Gatsby’s tragic flaw, his hamartia, is his incessant desire to attain a dream that is unreachable. He has certain hubristic qualities that tragic heroes often have due to the pride he has in his wealth, to the point that he rejects his own family: “His parents were shiftless and unsuccessful farm people – his imagination had never really accepted them as his parents at all. ”

Furthermore, another way in which Gatsby displays the hallmarks of a tragic hero is through his experience of anagnorisis, the moment he realises that he is wrong and the dream crumbles around him. For Gatsby, the moment of anagnorisis is when Daisy reveals that she did, in fact, love Tom: “I did love him once — but I loved you too. ” In his Poetics, Aristotle defined anagnorisis as “a change from ignorance to knowledge, producing love or hate between the persons destined by the poet for good or bad fortune. ” This is possibly what Gatsby experiences, confirming that Gatsby is a tragic hero rather than an antihero.

However, we must bear in mind that he still expects a phone call from Daisy right until the end – this could suggest that his anagnorisis was only partial and he was still able to cling onto the remains of his dream. The claim that Gatsby is an anti-hero could be contested when we consider that he has the traits of a romantic hero. The Romantic hero is a literary archetype referring to a character that rejects established norms and conventions, has been rejected by society, and has themselves as the centre of his or her own existence. This describes Gatsby in many ways.

He is withdrawn from society, rarely making himself known at his parties, and never seems to fit in with 1920s society. Fitzgerald describes Gatsby’s desire for Daisy as, “he found that he had committed himself to the following of a grail. ” The reference to a grail draws an interesting comparison between Gatsby and another key romantic hero, Sir Lancelot. The highly sought after Holy Grail was the chalice used by Jesus and it symbolises a long journey of devotion and patience, and is an extended metaphor to represent Gatsby’s heroic longing for Daisy.

Another similarity between the two romantic heroes is their relationships with women. In true romantic style, both men believe it is their chivalric duty to protect women. Lancelot is, “bound by oath to protect ladies. ” Likewise, Gatsby cares deeply for Daisy: “I want to wait here till Daisy goes to bed. ” Gatsby is also willing to sacrifice his own reputation for Daisy’s sake after the car accident: “but of course, I’ll say that I was [driving]. ” In light of this parallel it may make more sense to describe Gatsby as a romantic hero than an anti-hero.

Finally, it could be argued that Gatsby is a moral hero. A moral hero is a character of good moral values that believes in the dignity and value of humanity. This is reflected in Nick’s observations of Gatsby: “Gatsby turned out all right at the end. ” Of course Gatsby has his moral flaws, but the moral hero does not necessarily have to be perfect in every regard. Gatsby is certainly a good deal more moral than many of the characters that surround him. Again, to quote Nick: ““They’re a rotten crowd,” I shouted across the lawn. You’re worth the whole damn bunch put together. ”” The “rotten crowd” to whom Nick is referring are the rich characters such as the Buchanans, Tom and Daisy, who run away from their problems and hide behind their money. Nick points out that even a liar and criminal like Gatsby is better than the other liars and criminals because of his boyish romantic dreams. His desires are focused on ideals (like love) instead of materialism, and he did the honourable thing in waiting and sacrificing himself for Daisy, his holy grail.

This sliver of morality is enough to claim that Gatsby is mores a traditional hero than an anti-hero. To conclude, after careful consideration we determine that Gatsby is indeed more of an anti-hero than a hero due to his general lack of redeeming features. It could be argued that there are no heroes in The Great Gatsby, and that is one of the aspects that make it stand out in the literary world. The opposing arguments have some merit but ultimately they fail to realise the true implications and context of The Great Gatsby.

Gatsby is more of an anti-hero than a hero. (2020, Jun 02). Retrieved from https://studymoose.com/gatsby-anti-hero-hero-new-essay 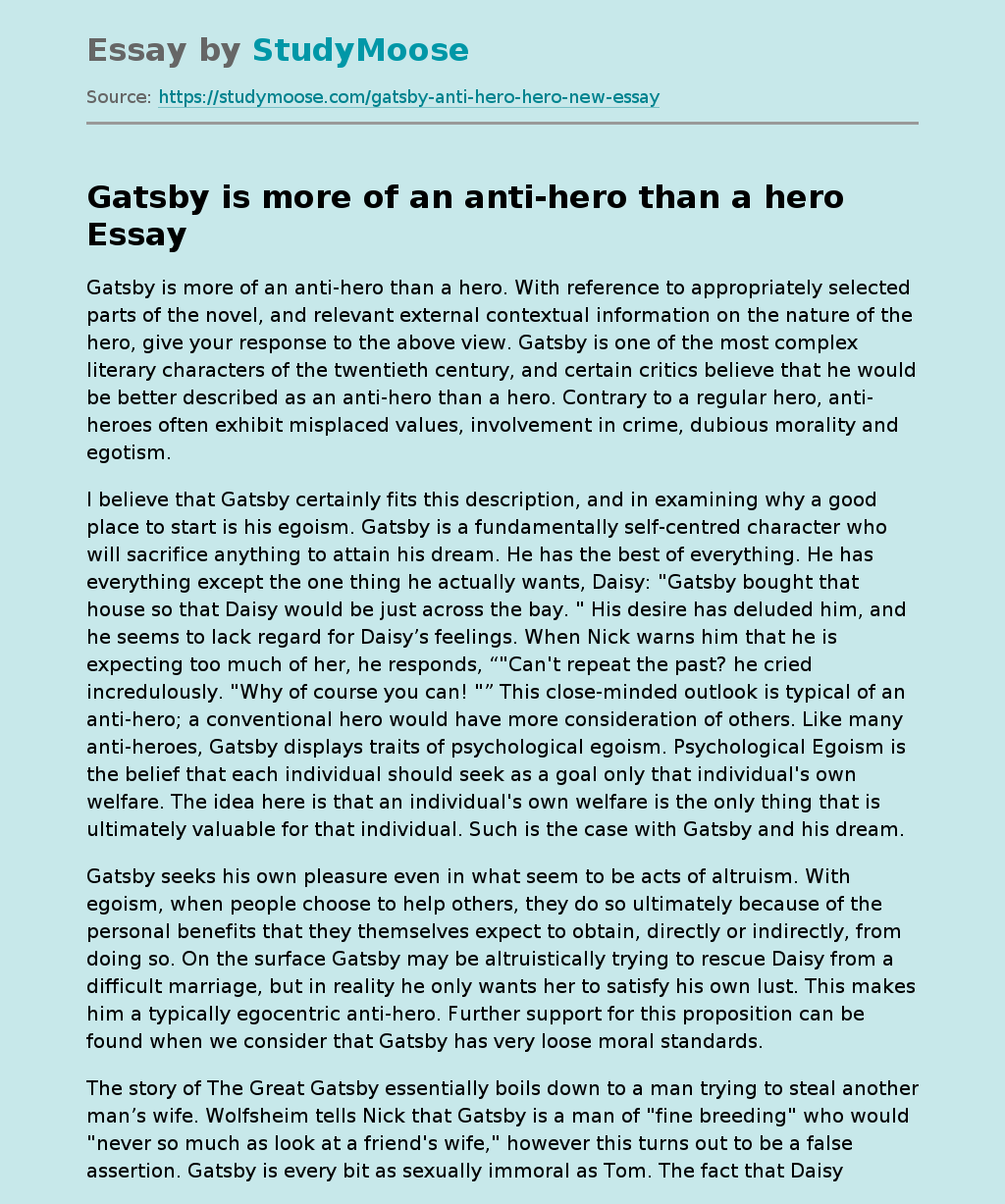