Imagination and Knowledge are two unusual concepts to compare, as they both define and represent not just different things, but contrasting ideals. Knowledge, as the name suggests, is the definitive act of knowing something through familiarisation with facts, information, descriptions or skills acquired through experience or education.

Don't use plagiarized sources.
Get Your Custom Essay on Imagination Is More Important Than Knowledge Just from $13,9/Page

Knowledge is universally regarded as truth as it has been tried and tested, anything recognised as knowledge has rigored through a variety of scientific, intellectual and practical tests to ensure its title as something generally known, is in fact a truth. Imagination, somewhat like knowledge is an abstract concept to define, it is personal and subjective. Imagination by technical definition is the mind’s ability to create images, sounds, feelings or sensations without the use of any of the five conscious senses, hearing, seeing, feeling, smelling or tasting.

The mind may use aspects of sensual memory but ultimately creates these experiences alone, hence imagines them as they are unreal.

However, by what definition makes them unreal? Surely if we see something it is true, because we know we’ve seen it and ‘seeing is believing,’ how do we separate imagination from knowledge if both is gained through sensual experience? Imagination could be considered a complex combination of free associations, which are abrupt feelings or emotions which require no previous knowledge. The separation of knowledge and imagination lies in the necessity for something be believe we know to be tested and tried. Knowledge is never static, something we discover and perceive as knowledge is never indefinite, it changes over time and must be tested accordingly on a repeated basis. Until the 18th century it was considered true knowledge that the earth was a flat surface, this knowledge was questioned by scientists with conflicting theories and proved to be wrong, we now know the earth is round.

Does this means the earth being flat was never knowledge since proved untrue? How can something be considered knowledge if there is no evidence to support the theory? Furthermore, how can evidence be found for something that is untrue in order for it to earn the title of ‘knowledge’, surely it remains a theory, which stems from imagination. For centuries people were believing a theory based on imagination. Thus, doesn’t this prove imagination is far more powerful than knowledge? Contrary to knowledge, imagination doesn’t only lead to belief, it doesn’t require proving. The fact that knowledge isn’t believed until proved, surely constitutes a weakness, proving Einstein’s belief that imagination is more important than knowledge. His explanation rests on the basis that our knowledge is currently limited and imagination is not; we know that we will know more than we know today, tomorrow.

Einstein rightly, in my opinion, claims that since knowledge is constricted merely to theories and ideas proven at present it is inferior to imagining what we may be able to prove in the future. Often, knowledge is disregarded when new information is learnt which discredits the previous findings. Negatively criticised, this knowledge is no longer considered so; perhaps blamed on ignorance, unintelligence or lack of experimentation. In these cases, how can this knowledge have ever been considered so when later proved false? Knowledge is defined as so merely for a point in time, whereas imagination is indefinite and always truth since it cannot be disproven or disputed.

It is subjective, much like Art its subjection is its greatest strongpoint and allows it to constantly be correct. Imagination triumphs also for the mere fact we imagine what we are later to know through what we desire to know. Imagination is dependent upon perception, emotion and language and they all interact and thus, enrich our imagination.nMoreover, not necessarily all people have imagination. For instance, scientists undervalue it, and instead emphasise on their ability to explore new facts, given pre-existing ones. Hence, the relevance of being imaginative is negligible seen through a scientific perspective. In comparison, all arts wouldn’t survive without imagination.

This makes the role of being imaginative too subjective. In this respect, imagination can be treated as a form of a well-developed associative memory, which doesn’t occur in all people. With all these factors taken into account, I fully agree with Albert Einstein. Ironically so considering his position as a scientist and loyal physicist, Einstein was able to recognise the importance of imagination when finding knowledge to prove. I concur with him on the understanding that knowledge is temporary until factually disputed whilst imagination cannot be, and therefore overcomes the importance of knowledge. One which cannot be fought, doesn’t have to fight and therefore always comes out on top.

Imagination Is More Important Than Knowledge. (2016, Oct 01). Retrieved from https://studymoose.com/imagination-is-more-important-than-knowledge-essay 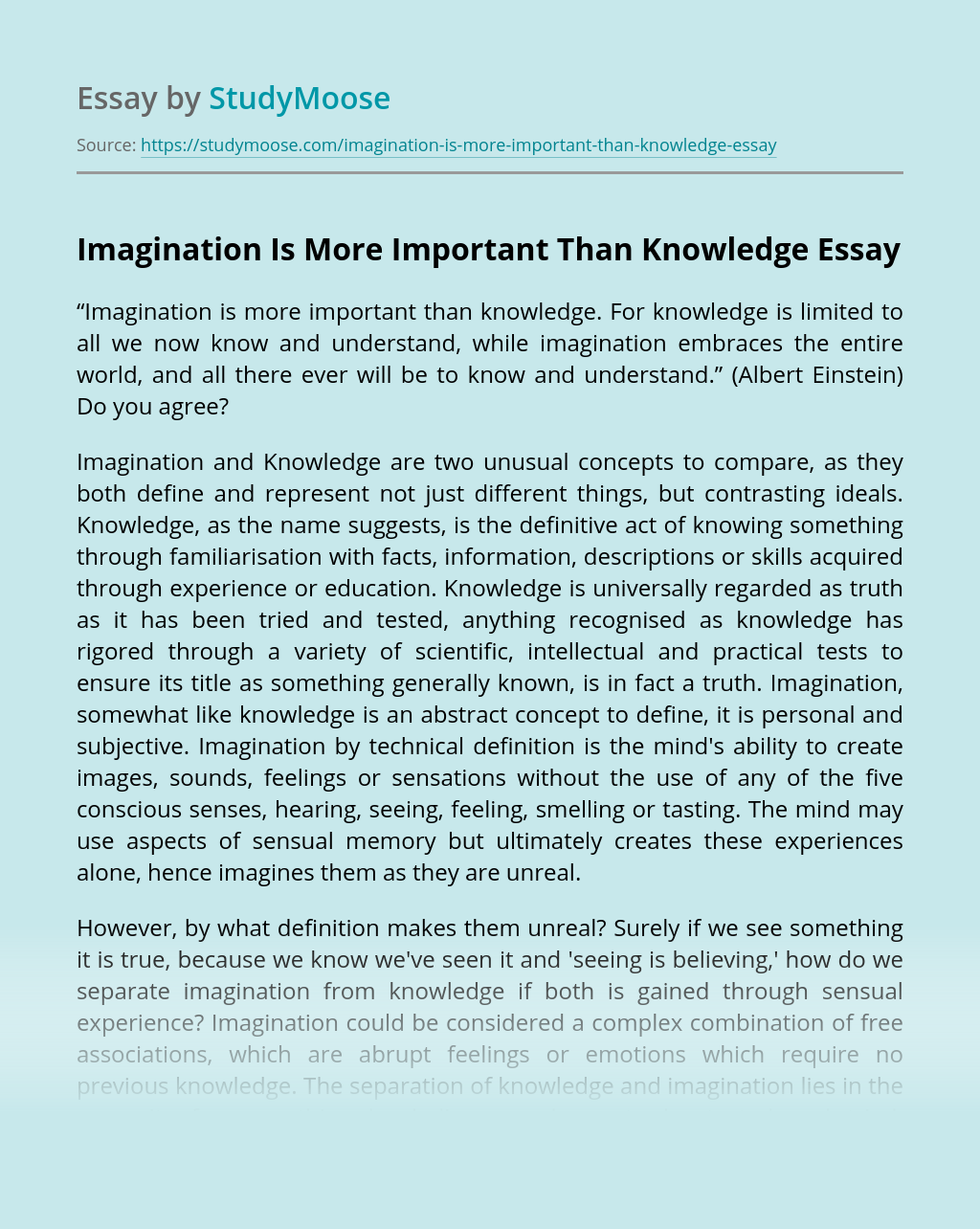 “Shooting Stars” is a horrific and moving poem written by Carol Ann Duffy. She adopts the persona of a female Jew speaking out from beyond the grave about her terrifying ordeal before she died in the Holocaust. A powerful impression is left on the reader after reading Duffy’s dramatic monologue and visual descriptions of her... VIEW ESSAY

The idea that sacrifice is required before Kenya attains true nationhood, is one of a range of ideas – others being birth, betrayal, heroism and forgiveness – in the novel “A Grain of Wheat”, by Ngugi wa Thiong’o. It is conveyed through the words and actions of many characters (especially Kihika, Mugo and to a... VIEW ESSAY

A week ago I asked my younger siblings to write a page on the topic The India I Want to Live In and surprisingly they wanted the same things which I also wanted when I was their age (I want those things now also). And most of the children have the same thoughts, which got... VIEW ESSAY

View sample
The Dangers of Totalitarianism

In the novel 1984, George Orwell creates a perfect totalitarian government warning the West countries (such as Spain and Russia) what their society may become in thirty five years. This book was written in 1949, predicting what may happen in the near future if totalitarianism was not rebelled against. Totalitarianism is a form of government... VIEW ESSAY