An essay on Albert Einstein, written in the first person, discussing his life works.

Albert Einstein My name is Albert Einstein. I was born on March 14, 1879 in Ulm, Germany. I was not an inventor in the conventional sense. I was a physicist and theorist. My inventions were not tangible things, but ideas I put on paper and may later on have led to inventions. I was not a good student in school. I did not pay attention to teachers because I found their lectures and teachings boring.

Don't use plagiarized sources. Get your custom essay on
“ How Albert Einstein Changed The World Essay? ”
Get custom paper
NEW! smart matching with writer

Often I would skip class to go study physics on my own. By the age of twelve I had taught myself Euclidean Geometry, and slowly beginning to develope my own theories in physics. My first theoretical paper was on Brownian motion. The paper discussed the significant predictions I made about particles that are randomly distributed in a fluid. My next paper was on the photoelectric effect, which contained a revolutionary hypothesis on the nature of light.

I proposed that under certain circumstances light can be considered as consisting of particles, and I also hypothesized that energy carried by any light particle, called a photon, is proportional to the frequency of the radiation. The formula for this is E=hv, where E is the radiation, h is a universal constant known as Planck’s constant, and v is the frequency of the radiation. This proposal, that the energy contained within a light beam is transferred by individual units, or quanta, contradicted the hundred year old tradition of considering light as a manifestation of continuous processes.

My third and most impotant paper, “On the Electrodynamics of Moving Bodies”, contained what has become known as the special theory of relativity. Since the time of Sir Issac Newton, scientists had been trying to understand the nature of matter and radiation, and how they interacted in some unified world picture. The position that mechanical laws are fundamental has become known as the mechanical world view, and the position that electrical laws are fundamental has become known as the electromagnetic world view. Neither approach, however, is capable of providing a consistent explanation for the way radiation and matter interact when viewed from different inertial frames of reference, that is, an interaction viewed simultaneously by an observer at rest and an observer moving at unifrom speed. In the Spring of 1905 after considering these problems for ten years, I realized that the crux of the problem lay not in a theory of matter but in a theory of measuerment. At the heart of my special theory of relativity was the realization thet all measurements of time and space depend on judgments as to whether two distant events occur simultaneously. This led me to develope a theory based on two postulates: the principle of relativity, that physical laws are the same in all inertial reference systems, and the principal of the invariance of the speed of light, that the speed of light in a vacuum is a universal constant. I was thus able to provide a consistent and correct description of physical events in different inertial frames of reference without making special assumptions about the nature of matter or radiation, or how they interact. This theory is best summed up in the equation E=mc2. Where E is energy, m is mass, and c is the speed of light squared. My final work was a failed attempt at trying to understand all physical interactions, including electromagnetic interactions and weak and strong inetractions. This has come to be known as the Unified Field Theory. Today this theory has still not been proven by modern scientists. Probably the most noticable invention to come from my work was born from necessity. During World War II, it was believed here in the United States that Nazi Germany was attempting to create an atomic bomb. As a result of this believed, and startlingly real, threat the U.S. put forth a major effort at construction of an atomic bomb. Even though I myself had no part in the actual creation of the bomb, many of my theories where used. This invention that came from my ideas does not help society in any way, but it does hinder it considerably. Because of my invention we live in a world that may cease to exist at the touch of a button by a power hungry dictator. My invention is one of the most serious threats to existance of mankind in today’s world. Bibliography Microsoft Encarta 95. Microsoft. IBM PC CD-ROM. 1995 Relativity: The Special and General Theory. Shelley Marion Publishing. New York. 1975. 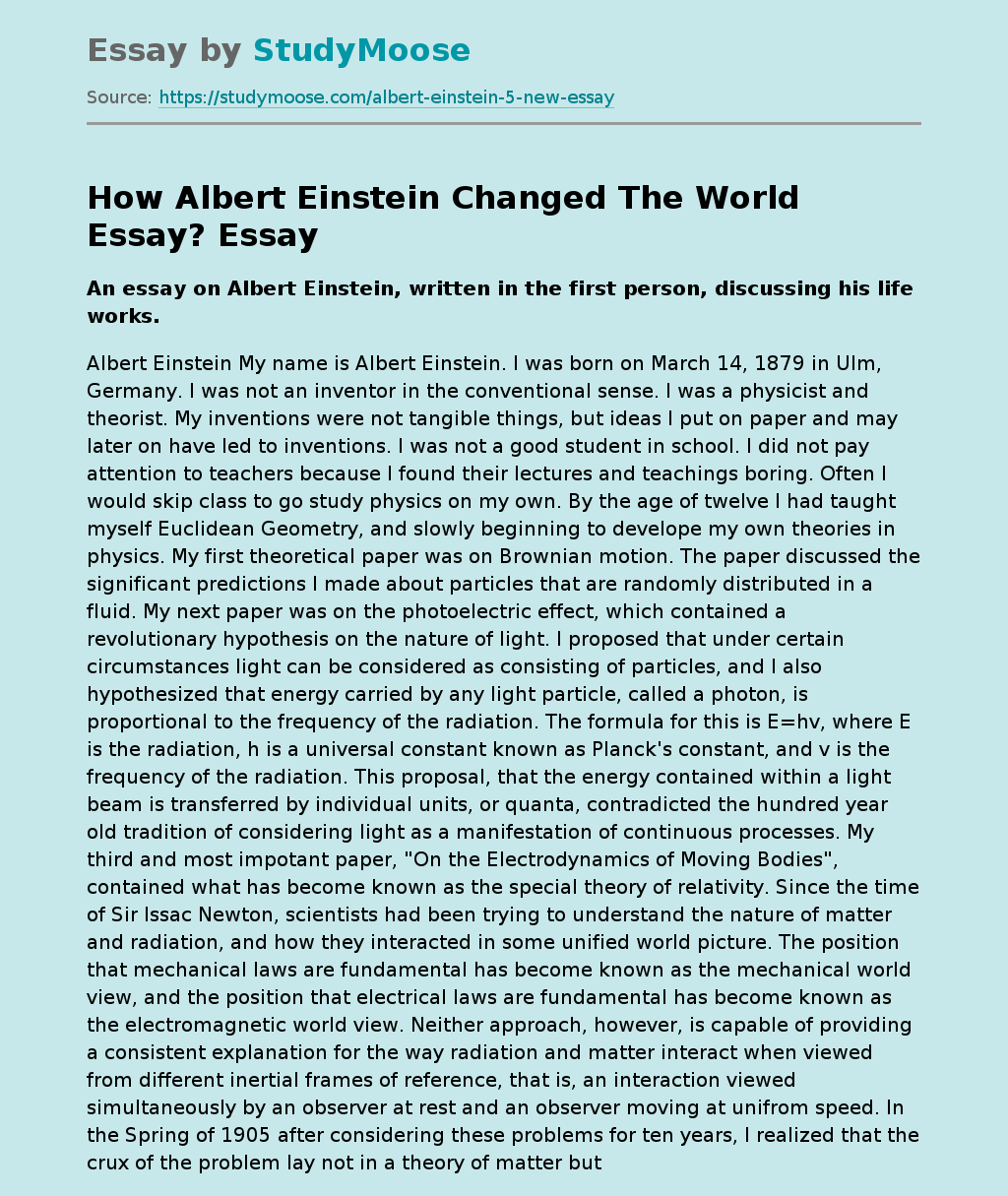