A Biography of the Physicist Albert Einstein

Albert Einstein was an important person who changed the world of science. People referred to him as a genius, and as one of the smartest people in the world. Einstein devoted himself to solving the mysteries of the world, and he changed the way science is looked at today. Albert Einstein was born on March 14, 1879, in Ulm, Germany. Albert’s speech was late in development; he didn’t start talking until he was about three. Since he started talking late, his parents thought he was retarded.

Don't use plagiarized sources. Get your custom essay on
“ A Biography of the Physicist Albert Einstein ”
Get custom paper
NEW! smart matching with writer

“His explanation was that he consciously skipped baby babbling, waiting until he could speak in complete sentences”(Brian 1). Einstein had a very bad temper when he was young; he got mad and hit his sister Maja in the head with a garden hoe and cracked her skull. When he was in school, his teachers thought he was mentally retarded because he ignored whatever bored him and attacked anything he had interest in.

Einstein was twenty-one years old when he got married.

His marriage almost didn’t take place because Mileva, his fiance, thought he had an affair. Einstein decided to go to America to tell other scientists about his theory of relativity. He brought his wife and several freinds with him. When they got there, they were stormed with reporters and camera-men who wanted to know about his theories. He went around to different areas and gave speeches and lectures. When he appeared at Union Station to lecture, there was almost a riot because so many people wanted to see him.

He received the Nobel prize for his famous theory. Another famous scientific theory he discovered was E=MC2 (energy equals mass times the speed of light squared). That theory made the atomic bomb possible. “At dawn on July 16, the atomic structure of the world was revealed when Einstein’s famous equation E=MC2 came to life with a bang”(Brian 344). He was famous for his philosophies too. besides the theory of relativity, he discovered the theory of motion. “The motions of bodies included in a given (vehicle) are the same among themselves whether that (vehicle) is at rest or in uniform motion” (Hoffman 63).

When Einstein was a kid, he devoted himself to solving the mysteries of the world. On April 18, 1955, Einstein died in his sleep. On his desk lay his last complete statement, written to honor Isreali Independence day. It read in part: “What I seek to accomplish is simply to serve with my feeble capacity truth and justice at the risk of pleasing no one.” (Encyclopedia 513). Albert Einstein was smart as a child, but no one understood him, and he was punished for it. Albert Einstein discovered the theories of relativity, and motion as well as the atomic bomb. Einstein was one of the most important people in science, and he dedicated his life to changing the world.

A Biography of the Physicist Albert Einstein. (2020, Jun 02). Retrieved from https://studymoose.com/a-biography-of-the-physicist-albert-einstein-essay 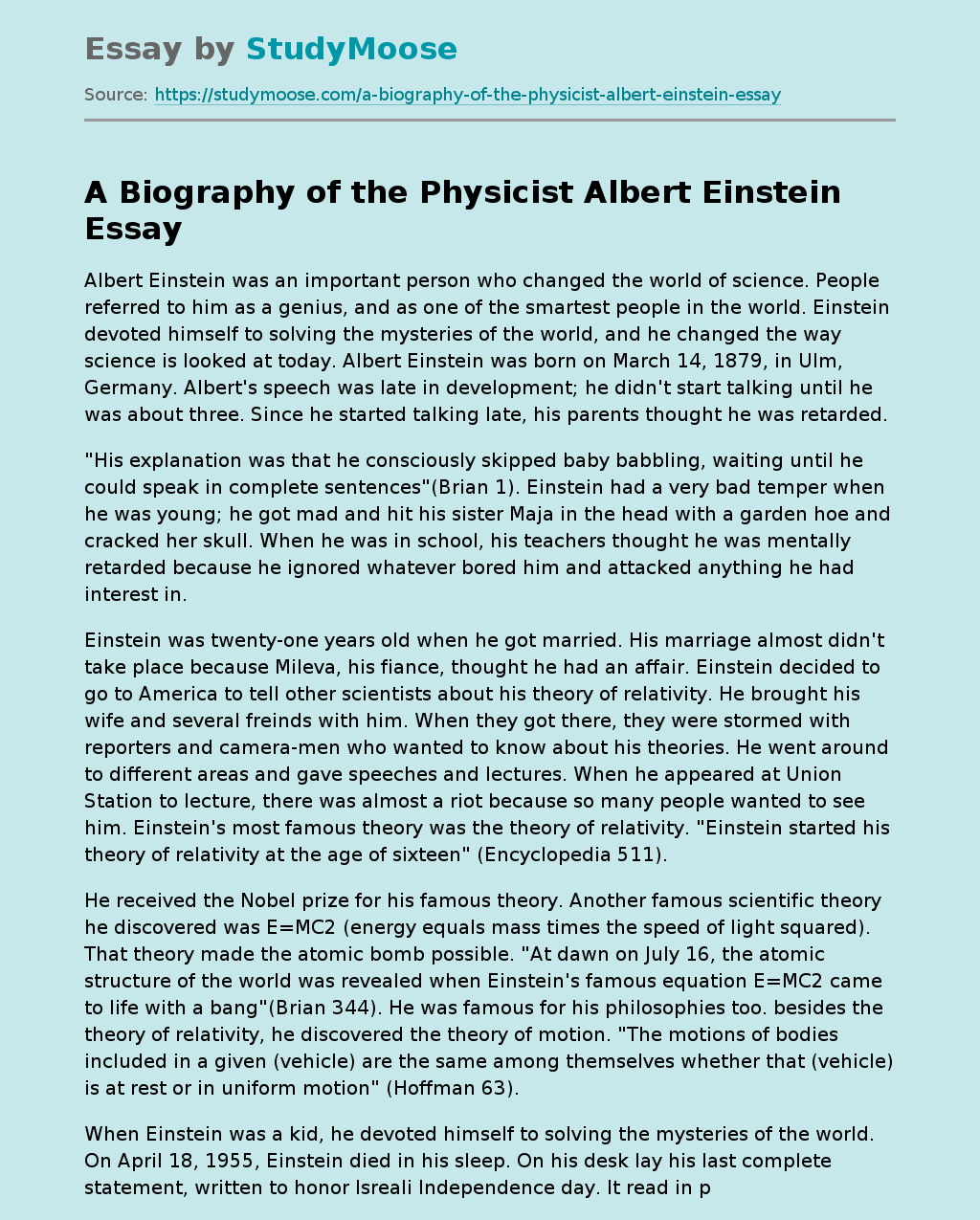