Absurdity of Human Life in The Stranger by Albert Camus

The Stranger, written by French Author Albert Camus, presents a self-narrated story of the main character Meursault, a person spiritually detached from the rest of the world, whose mind is full of absurdism. Camus illustrates the conflicts which Meursault experiences while living in a world that urges him to explore the purpose of human life. At the same time, the novel also displays the irony underlying the nature of mankind by portraying events that go utterly the way incongruent to what is expected of them to be.

Don't use plagiarized sources. Get your custom essay on
“ Absurdity of Human Life in The Stranger by Albert Camus ”
Get custom paper
NEW! smart matching with writer

Through the characterization of Meursault using his behavior and unique features, as well as the ironies arising along the storyline, The Stranger reveals the absurdity and pointlessness of people’s searching for meaning in life, making the readers reconsider the fundamental purpose of human life.

Camus utilizes the contrast between Meursault’s seemingly emotionless behavior and his inner thoughts displaying sentience to create a sense of absurdity in people’s attempt to perceive emotion.

Meursault was accused being “morally guilty of his mother’s death”(Camus, 64)because he “hadn’t wanted to see Mother’s body, or shed a single tear”(56), which appeared to the eyes of juries as the behaviors impossible to be seen from anyone who possesses emotion. Indeed, Meursault just didn’t feel it necessary to express grief towards death since it’s something that would happen anyways at some point of life, but one thing he could assure was that “I(Meursault)’d rather Mother hadn’t died ”(41).

This distinction between Meursault’s indifference towards the expression of sorrow and aspiration to have mother alive reveals human’s inability to distinguish between “expression” and “emotion”.

Hence, it is absurd to attempt to judge other’s emotional condition or try to fully understand what emotion truly is. Through characterizing Meursault into such person whom emotional state can’t be easily captured, Camus intensifies the absurdity in people’s trial to define other’s emotion, especially when only based on the externally exposed behavior. This absurdity in human’s identification of emotion is further enhanced in the process of determining whether Meursault really loves Marie. Meursault had always been passive in his relationship with Marie. He didn’t even bother to cogitate when Marie asked him to marry her.

However, with or without himself noticing, Meursault constantly observes and appreciates Marie’s physical beauty and personality, gradually becoming attached to Marie up to the point of “seriously consider(ed) the possibility of marrying her”(33) and thinking about Marie even on the day of his execution. Meursault himself doesn’t notice this compelling force of love in contrast to his thoughts manifesting such deep affection. This instance where even Meursault himself is not aware of his own emotion portrays the ambiguous nature of emotion, pointing the ridiculousness of people searching for the inherent value of human emotion. Camus, therefore, incorporates the incongruity between Meursault’s inner thought and behavior to depict the absurdity and nothingness in the attempts to determine the presence of emotion in life.

Meursault’s possession of features unusual in conventional society further signifies the absurd nature of human beings. Meursault is impervious to the influences of the external environment. He is able to disregard the issues that are unimportant to him at the moment. Even in the case of being reminded of his dead mother after hearing Salmano’s weeping for the lost dog, Meursault “went straight to bed ”(27) without having any further thoughts because “I(He) had to get up early next day”(27).

Meursault’s response to the situation is seemingly amoral yet practical in the sense that he recognizes what is more important in life. Through portraying this feature of Meursault by juxtaposing him with Salamano, who shows the response of conventional human after losing their precious ones, Camus highlights the absurd nature of human to long for unchangeable things and events. Moreover, Meursault’s distant attitude towards religion demonstrates the meaninglessness of people’s searching for spiritual reliance in their life. On the day of his execution, Meursault refused to meet the chaplain because “I(He)’d had very little time left, and I(He) wasn’t going to waste it on God.”(74)

People usually rely on religion in severe situations such as death. However, unlike the magistrate who believes “his life would lose all meaning”(43) if he doesn’t believe in God, Meursault considers the reliance on religion useless since it doesn’t change the fact which human life always runs towards death. This ideology of Meursault reveals human’s inability to go beyond absurd because, in the end, even their reliance on religion becomes purposeless. Camus employs this character of Meursault to reflect the absurd nature of conventional human—running into religion at points of uncertainty, and struggling to escape from the predestined faith.

On the other hand, the irony created through characters’ failure to focus on important details during the court trial derides people’s action of chasing after justice in their life. Despite Meursault’s friends and neighbors are the ones who understand him the best and are directly related to his crime, the court ignored their remarks on Meursault being “a good man”(58) and “a good fellow”(59). Rather, people preferred hearing the doorkeeper, someone highly irrelevant to Meursault’s case, “repeat what he had said about the coffee and my(Meursault’s) smoking”(56) in order to define Meursault as a cold-blooded man. The court’s focus on irrelevant details causes an imbalance in evidence of the case, eventually depicting Meursault as a cruel murderer without any good. Justice is meant to provide equality and justice for all man.

The irony in the court focus of Meursault’s case due to his status of being a criminal makes justice fail to meet its intention, manifesting the inanity of people trying to achieve justice which does not always serve its purpose. The preposterousness of people’s aiming for justice is further set forth by the unintelligible attitude of the prosecutor. When Meursault tries to explain he had “no intention of killing Arab”(64), the prosecutor discounts all his explanation and only makes mention of the confess “It is true I(Meursault) killed a man”(65).

However, when the court starts tackling Meursault emotionless behavior at mother’s funeral, every single detail including Meursault declining to see mother’s body, smoking cigarettes and sleeping, was emphasized. The prosecutor is the former declarer of justice in court. His ignorance towards the context of Meursault’s murder of Arab, which is the crime Meursault should actually be accused of, reflects the inevitable intervention of personal bias in all declaration of justice. Hence, using this questionable attitude of the court and prosecutor, Camus encourages the readers to query if such thing as absolute justice actually exist. The portrayal of these people trying to achieve justice with their ignorance, this extremely ironic situation, also intensifies the sense of absurdness in all human actions.

Another irony which discloses the absurdity of human life is the incongruence between Meursault’s tragic end of being executed and his pure intention of trying to be friendly and honest in all circumstances. Meursault fulfilled the favors of Raymond, a man of trouble, because he didn’t want to disappoint someone who calls him “friend”. However, this pure intention of helping a friend got himself involved in troublesome events such as writing letters to Raymond’s lady, witnessing for Raymond, and eventually killing an Arab. Furthermore, he was branded as a “cold-blooded prisoner in pursuance of some sordid vendetta in the underworld of prostitute and pimps”(60). The illustration of this ironic cause-and-effect relationship, where good intention was repaid by disastrous effect, blurs the line between true and false, good and evil.

Camus makes use of this distinctive effect to exhibit the pointlessness of searching for definite answer to the value of human life because it’s full of the coexistence of contradicting elements, just like in this case of Meursault. The depiction of Meursault end up being executed because of his stubbornness to stay honest towards the questions asked to trap him reinforces the presence of absurdity in mankind. In response to the warden’s witness defying him amoral, Meursault stays frank and answers “the witness is quite right”(56). Even when his lawyer ask him if he could say he kept his feeling under control during mother’s funeral for them to win the court trial, Meursault refuses and says, “That wouldn’t be true.”(41) The ridiculous irony where Meursault’s honest confession triggered his death exposes the irrationality of life, and it also reveals the absurdity of human searching for meaning in such illogical life.

In conclusion, Albert Camus effectively utilized the characterization of Meursault and the ironic details in storyline to provide readers a clear vision of absurdity in human life. Through the incongruence between Meursault’s behavior and inner thoughts as well as his possession of features unusual in conventional society, Camus manifests the inanity of people’s trial to explore meaning in life. The occurrence of unintelligible ironic events presents the inherent human nature of being absurd while blurring the line between opposing elements. The literary elements incorporated by Camus does not only reveal absurdity of life but also displays a sense of criticism and ridicule towards ignorant people and society continuously seeking for meaning in life.

Absurdity of Human Life in The Stranger by Albert Camus. (2021, Dec 03). Retrieved from http://studymoose.com/absurdity-of-human-life-in-the-stranger-by-albert-camus-essay 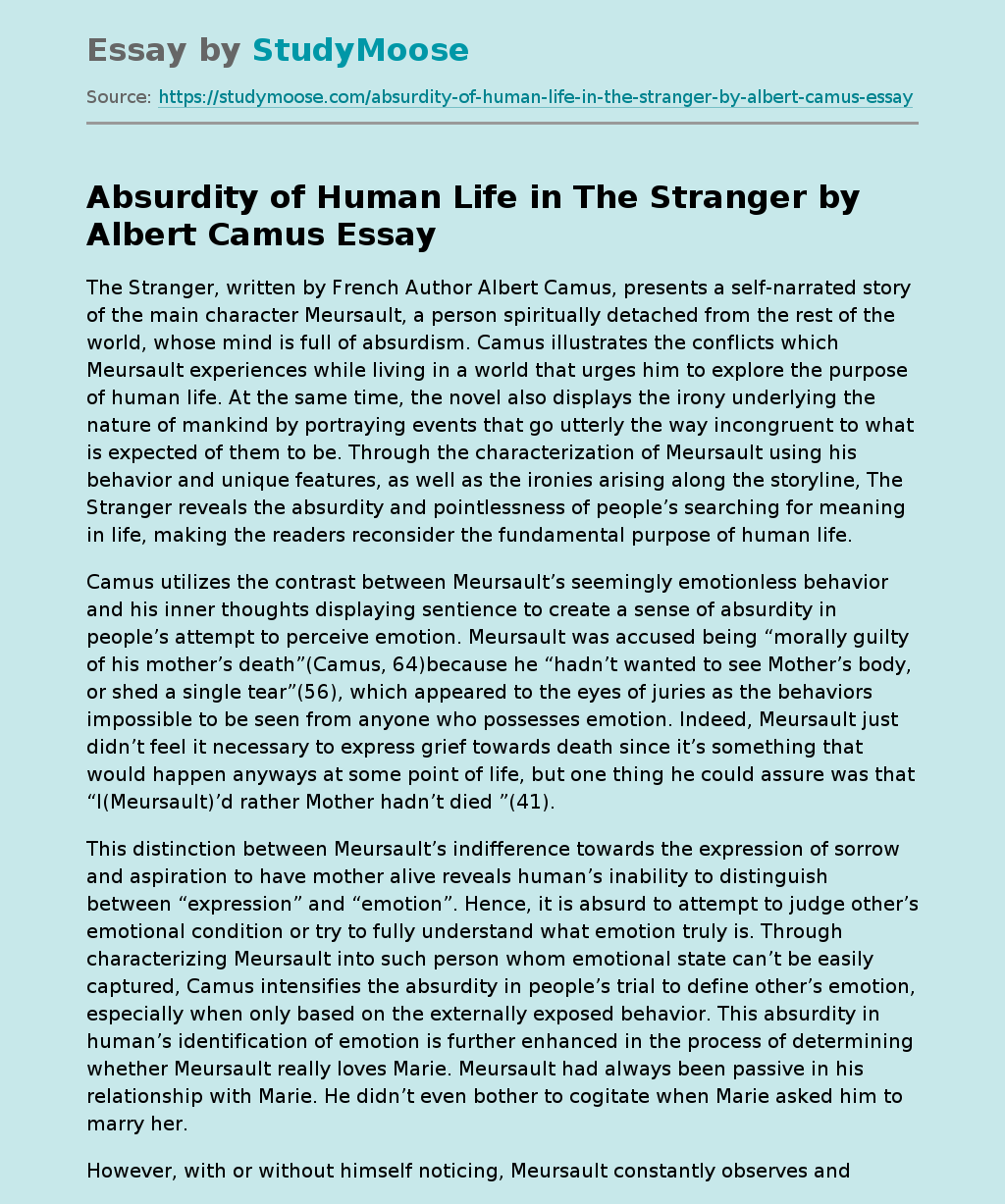