Mersault and His Trial in Albert Camus's "The Stranger"

Is there truly any justice in the novel The Stranger, written by Albert Camus? This is a question that naturally protrudes throughout the novel, as it is not abundantly clear what Meursault, the protagonist, was, in fact, put on trial for. At the beginning of the second part of the narrative, it is understood that he is put on trial for the murder of an Arab; however, it later comes to our attention that the murder was not the primary reason of his trial, and perhaps not even an essential one for that matter.

Turn in your highest-quality paper
Get a qualified writer to help you with
“ Mersault and His Trial in Albert Camus’s “The Stranger” ”
Get high-quality paper
NEW! AI matching with writers

The fact remains that Meursault was undoubtedly put on trial, not for the murder committed, but for being the way he was: unemotional through the eyes of society, which was represented by the jury.

To the reader it seems only natural that one should be put on trial, not for their personality, but for the harmful acts that one may commit to another person. Therefore, the idea is strongly implanted in the novel, as well as the mind of the reader, that Meursault was put on trial for murder.

Nevertheless, throughout the course of the novel, it becomes apparent that he was, as a matter of fact, not put on trial for the murder of the Arab, but instead, for acting in such a stoic manner. Being the honest, straightforward man he was, he answered all questions in that same conduct. Once Meursault had been appointed a lawyer, his lawyer inquired over the events of Maman’s funeral.

Meursault responded rather coldly when his lawyer had asked him if he had felt any sadness that day, saying that he “probably did love Maman, but that didn’t mean anything.

At one time or another all normal people have wished their loved ones dead.” (p. 65) This quotation only demonstrates that he was unemotional. Now, one must ask the following question: how does this relate to the murder of the Arab? The answer is simple: it does not relate to the murder of the Arab. Being the representative of society, the jury opposes Meursault and accuses him of not conforming to society’s natural ways, and being what we nowadays refer to as the “odd one out”. They exclude him from society for his odd clear-cut and sincere demeanor, and for his manifestation of an inexpressive character.

Another example is the moment in which the magistrate, a local member of the judiciary having limited jurisdiction, especially in criminal cases, questioned Meursault. In this particular scene, the magistrate changes the topic rather abruptly from his love for Maman, to which he responded he loved “the same as anyone”(p. 67), to the murder scene. What followed was a vast discussion on Meursault’s belief in God, which he felt rather apathetic about; however, the magistrate, waving a crucifix to his face refers to him as the “antichrist” (p. 71). And later, during the trial, the judge and the prosecuting attorney seem more intrigued by the fact that Meursault did not grieve at his mother’s funeral and got involved with Marie the day after it, than the actual act that had been committed: the assassination of a man. The majority of the witnesses that had been called only supported the argument of his callous nature, as they very well knew that Meursault was frighteningly candid, and could not, or would not, create a perversion of the truth to suite his trial, as well as his need for freedom.

Throughout the trial he is constantly asked about Maman, and whether she ever complained about him, or if she had “reproached him for having put her in the home” (p. 89), to which both, the answer was an affirmative. After a while, it becomes apparent that they are no longer inquiring over the murder, but instead, over his mother’s unfortunate death. It arrives at the point that the prosecutor declares “‘The same man who the day alter his mother died was indulging in the most shameful debauchery killed a man for the most trivial of reasons and did so in order to settle an affair of speakable vice.'” (p. 96)

To which Meursault lawyer replies, “‘Come now, is my client on trial for burying his mother or for killing a man?” (p.96) This is the crucial point of the novel, as it is here that it becomes evident the true reason for which he is put on trial. This is the key question throughout the entire trial, and the answer is obvious as the prosecutor firmly responds, “‘Indeed (…) I accuse this man of burying his mother with crime in his heart!”(p. 96) This is a rather profound statement that affects not only the characters in the novel, but the reader as well, rather intensely.

Thus, it becomes palpable that society, in other words, the jury attempted to fabricate and impose rational explanations for Meursault’s irrational actions. The fact that he was so straightforward and onest was disruptive and threatening to their society as they were not accustomed to it, and therefore, they saw no meaning, which would consequently create chaos in their orderly lives. Meursault appears to do as he pleases, when he pleases, and therefore, follows no pattern throughout his life, hence, society becomes threatened by him, which ultimately leads to his execution.

Mersault and His Trial in Albert Camus's "The Stranger". (2016, Jun 21). Retrieved from http://studymoose.com/mersault-and-his-trial-in-albert-camuss-the-stranger-essay 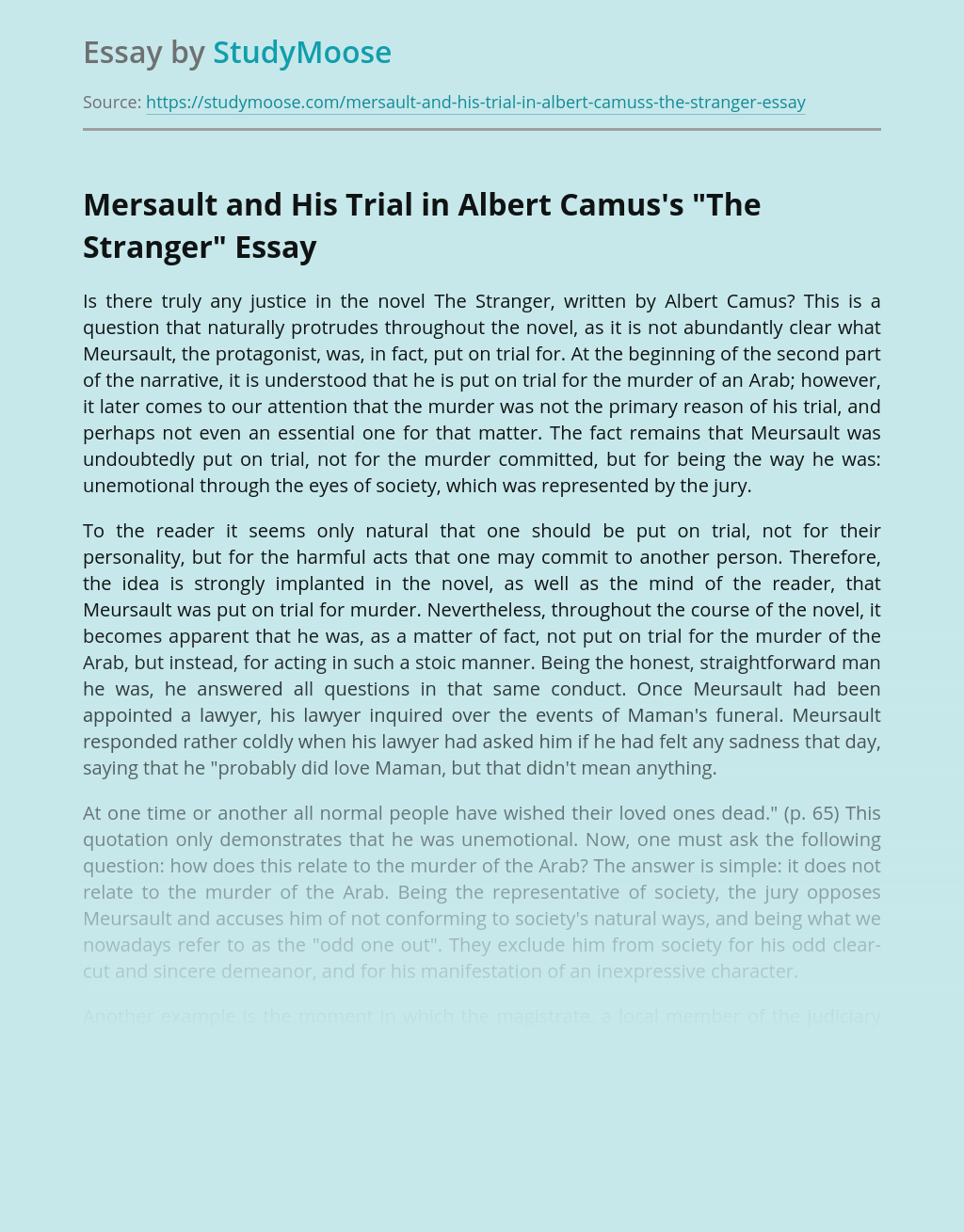 Turn in your highest-quality paper
Get a qualified writer to help you with
“ Mersault and His Trial in Albert Camus’s “The Stranger” ”
Get high-quality paper
Helping students since 2015
Stay Safe, Stay Original