An Analysis of The Stranger, a Novel by Albert Camus

In Albert Camus’s famous novel The Stranger there are many out of the ordinary occurrences, the theory of absurdity is thought of quite frequently throughout. The main character Meursault, gets himself into a predicament that develops Camus’s philosophy of the absurd. His philosophy is that humans tend to impose a rational order on the world in the face of evidence that the world is absurd. According to Webster’s Dictionary the word “absurd means clearly unreasonable” (Webster 4). This means that Camus is saying that all people think there is a certain type of order in a place that clearly has no order.

Don't use plagiarized sources. Get your custom essay on
“ An Analysis of The Stranger, a Novel by Albert Camus ”
Get custom paper
NEW! smart matching with writer

If anything is absurd it is the fact that Camus thinks that having an order to daily life is clearly unreasonable.

In the novel, The Stranger, Meursault has a bit of “off the wall” luck. In the beginning of the novel his mother dies after living in a home for three years. Meursault goes to the home to attend the funeral but displays no grief and acts as if nothing has happened. This is quite odd considering that that was his mother.

Soon after he returned home from his trip to see his mother Meursault, while taking a swim, meets a woman by the name of Marie Cardona, a former co-worker. They spend the afternoon together, and then they see a movie, and then Marie spends the night with him. The next day Meusault stays home and decides that since his mother has died nothing has changed, his life will still remain the same. The next day Meursault meets his neighbor, Salamano, on the stairs of their apartment building, with his dog. Salamano walks his dog twice a day, beating it and swearing at it the whole time.

Later that same day, Meursault becomes “pals” with his other neighbor, Raymond, who is a gigolo. Raymond asks Meursault if he could help him with a situation that he has with his mistress. Raymond suspects that his mistress was cheating on him, he beats her, and she leaves him. Raymond still wants her so he asks Meursault to write a letter to her and try to guilt her into coming back to him. When she does return to him, Raymond plans to sleep with her and then spit in her face. Meursault agrees to write the letter and Raymond declares that they are “pals”. Raymond’s friend, Masson, asks if Raymond, Marie, and Meursault want to come to his beach house, they agree to go. Meanwhile at work, Meursault was asked if he would like to transfer to Paris, he said that it was all the same to him. His boss was disappointed with his lack of ambition. The next Sunday the three did go to Masson’s beach house where they met Raymond’s mistress’ brother, the Arab, and his friend. The two Arabs and Raymond and Meursault fight and Raymond is taken to the doctor due to a slash, from a knife, on the face. Raymond returns with a gun and goes after the Arab men, Meursault follows him and convinces Raymond to give him the gun. As they are returning to the beach house, in the intense heat, Meursault encountered the brother of Raymond’s mistress and his knife. As a result of that and the intense heat Meursault shoots the Arab once and then four more times after that.

When they return Meursault is put on trial for the murder of the Arab man. He says that he did not go back to the beach to kill the man but that he did it because of the sun. Throughout the trial it seemed as if Meursault was being charged of the way he treated his mother, and him being atheist, and his generally attitude of not caring about what happens instead of the actual murder. As the trial ends Meursault is charged with premeditated murder and death by guillotine.

The Stranger is an examination of Camus’s philosophy of the absurd, it’s not a book that is going to question ones morals, it contains no lessons to test ones moral self. Camus’s philosophy of the absurd characterizes the world and human existence as having no rational purpose or meaning. Despite the absence of a rational purpose or meaning, human beings demand that there be one. He suggests that human beings are pushed into a life that can only end in death. Meursault’s personality represents this philosophy. In keeping with this philosophy, Meursault’s simple, direct reporting of his mother’s death and her funeral, his lack of reaction to Salamano beating his dog, his sheer acceptance of Raymond’s abuse toward his mistress, his lack of caring about whether he and Marie would marry, and the lack of interest at his own trial, offers no logical interpretation that ties his life together in any meaningful way.

Meurasult’s life may be absurd but the thought of the entire human race lying under Camus’s philosophy of the absurd does not apply. The truth of it is that nothing is truly absurd, that is to say nothing in this world is “clearly unreasonable” to everyone. We live our lives hoping they prove to have some meaning, some reason. “Once having acknowledged the place of self in time, our logical thought process will then lead us to think about ourselves with respect to death. And death is the most overpowering evidence of the absurd” (Rhien 2). To some people death might seem absurd, for example to Meursault death was most likely an absurd act, showing no clear reason. On the other hand, to those of us that have a religion and follow a faith death is not absurd at all, in fact it is quite clear that death is just another part of life.

Religion may be what Meursault needed in his life to make him feel like he had meaning, like he had some reason, some purpose. Meursault, himself, is an absurd human being, he has no feeling about anything in his life. “But that’s not all; there is a passion of the absurd. The absurd man will not commit suicide; he wants to live, without relinquishing any of his certainty, without a future, without hope, without illusion, and without resignation either. He stares at death with passionate attention and this fascination liberates him” (Sartre 2). Although the absurd man feels very little he still wants to go on, only to see what lies ahead. He goes along, day to day, only to enjoy the pleasures and not thinking twice about the dissatisfactions of life. As in the case with Meursault, he was never very concerned with the serious aspects of life. When his boss asked him if he would like to go to Paris, Meursault replied that is didn’t really matter where he was, and when Marie asked if he wanted to get married he responded that he would if she wanted to they would, but it didn’t really matter to him. These are the things that average people take very serious in their daily live, these are not the things that you say “whatever” to when they arise. As for Meursault, instead of being concerned with things of this nature he thought more about the simple pleasures in life. He concerned himself with drinking, smoking, swimming in warm water, sunbathing on beaches, sex with a new woman, and watching and enjoying the light of the day’s sun. The present was what Meursault worried about, this is most likely why Camus had Meursault enter the story without a past and never mentioned any kind of future.

Meursault does not look into psychological self-analysis, and he also does not judge or interpret the actions of others. Therefore it is possible to assume that Meursault has not yet developed a full consciousness. He is not very self aware, and he is not very aware of the workings that take place in the minds of others. He functions mostly as an observer of the world around him even as he participates in it. After his mother’s death he feels no great change in his life and he then assigns no meaning to her loss. Meursault would have to take interpretive control over his life to assign meaning to her death. Many people may take this control over interpreting meaning in their own lives, but Camus suggests that this is caused by the need for rational structure. Meursault is Camus’s example of someone who doesn’t need this rational world view—absurd.

Another example of Meursault being absurd is that he offers a description of events that lead up to the killing of the Arab, but he gives no explanation. The murder is obviously unmotivated, so it challenges the rational order of cause and effect that society demands. It is only after Meursault’s arrest that any meaning is attached to the killing. The first question the killing provokes is “Why?” Nothing in Meursualt’s dialogue up until this point answers this question. In fact, there is no satisfactory answer unless we create the illusion of meaning by interpreting the events that lead up to the murder in a sinister light. Camus forces us to confront the fact the any rational explanation we can offer is based on a consciousness that we create for Meursault. By saying this it is clear that not even Meursault is an absurd human being. He maybe difficult to figure out and one may have to resort to the fact that he has no religious beliefs and use that as a reason for the lack of explanation and interest in life matters, but to refer to him or anyone as falling under Camus’s philosophy of the absurd would be selling them short, or maybe it would be the easy way out of not completely understanding someone or something themselves. I feel that being absurd is an impossibility, no matter what way you look at things someone somewhere will see your reasoning, therefore you will never be clearly unreasonable.

“In order to understand the novel, however, it is important to appreciate that Meursault is an intellectual, albeit one who claims to be no longer interested in things of the mind” (Fletcher 4).

An Analysis of The Stranger, a Novel by Albert Camus. (2021, Sep 15). Retrieved from http://studymoose.com/an-analysis-of-the-stranger-a-novel-by-albert-camus-essay 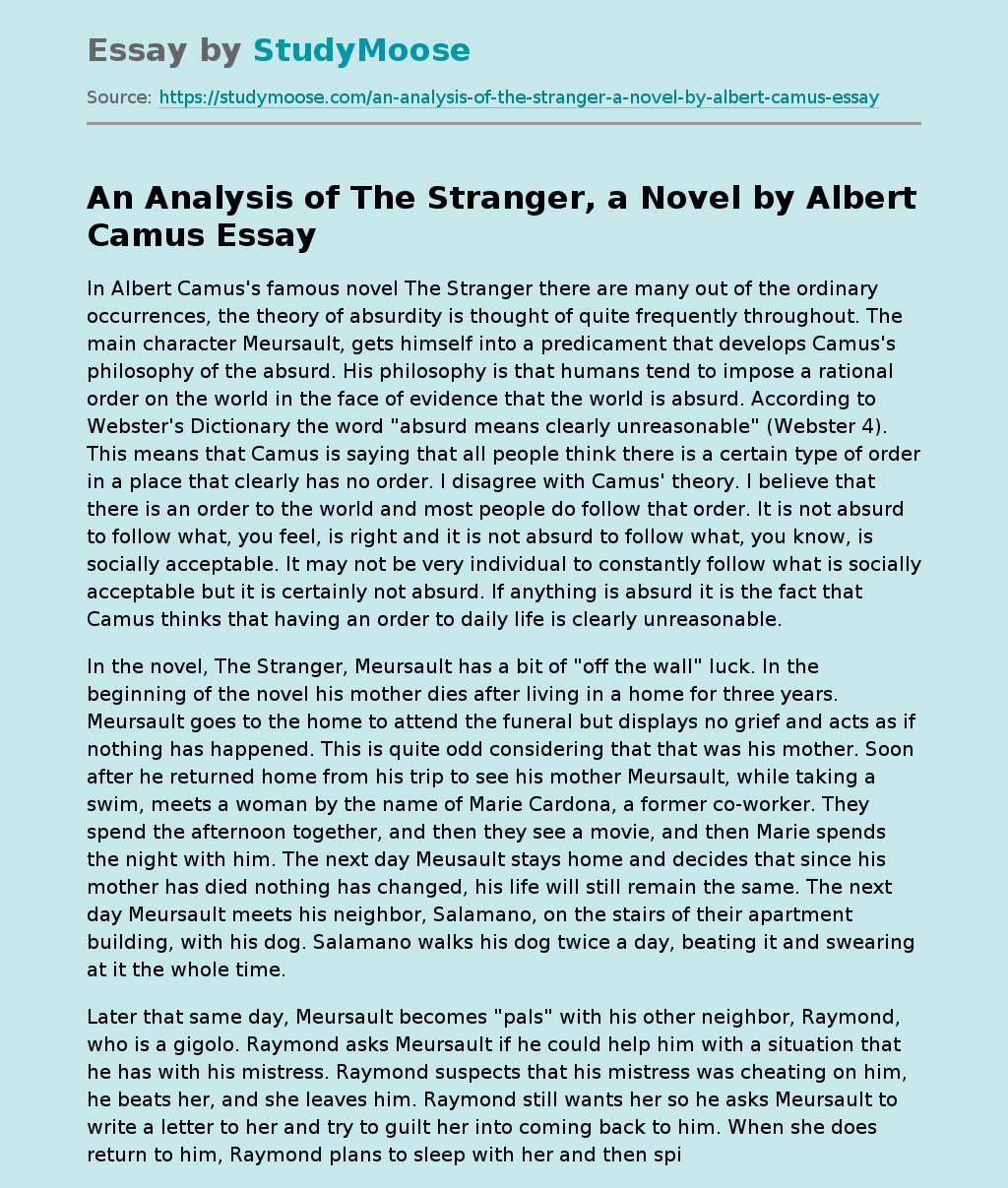