The Stranger Throughout Albert Camus

Reflective Statement By exploring Algerian history and culture in the novel The Stranger by Albert Camus, I have come to understand how the history of Algeria plays a crucial role in the thematic elements of the novel. For example, I discovered how the French colonized Algeria from 1830 to 1962. Since the novel was published in 1942, it makes sense that there are tensions between the native Algerians in the novel and the French. I also learned a lot about how the different cultures created tensions.

Don't use plagiarized sources. Get your custom essay on
“ The Stranger Throughout Albert Camus ”
Get custom paper
NEW! smart matching with writer

The French Christian tradition often conflicted with the Arabic Muslim tradition of the native Algerians which also resulted in the hostility between the French and the Arabs as demonstrated throughout the novel. I now better understand why none of the Arabs have actual names and are often just referred to as “the Arabs”.

This helps me recognize the blatant disrespect and racism that is shown towards this group of people. Even the Arab that was murdered by Meursault is mostly disregarded.

The court focuses on the fact that Meursault didn’t cry at his mother’s funeral rather than the fact that he killed a man in order to test his personality and character. There is a consistent dehumanization of the Arabic community in the novel. Another example of this is shown in the way Raymond treats his mistress. I now understand that there could potentially be some violence shown towards her due to her Arabic descent. Not only does Raymond feel as though he has so much power above her because she is a woman, but also because she is an Arab.

I also learned a lot about why the Arabs in the novel act the way they do towards the French. During this time period, Algerians would often revolt against the French settlers in an effort to regain independence. This could explain why the Arabs would stare at the French with some antipathy.

Additionally, the discussion taught me about Camus’ stance toward French/Algerian relations. He was born to a poor family in Algeria and because of that didn’t fully support Algerian independence, as he thought that it didn’t support the lower class. However, he had experienced segregation between himself and the Arabs and was against such discrimination. That shows me how he uses this novel to also include social commentary about the French’s behavior towards the Arab community in Algeria. Word Count: 395 words The perversion of the justice system explored through race, religion, and consciousness in Albert Camus’ The Stranger Throughout Albert Camus’ The Stranger, the justice system is critiqued in order to expose what the justice system reflects about the society that surrounds the main character, Meursault’s, values. Through the use of the justice system, the flaws of the society in which Meursault reside are made evident and the way that Meursault frees himself from these flaws furthers the idea of the justice system being criticized as irrational. By examining religion, race, and consciousness, Meursault’s character exposes how flaws have manifested in his society through the justice system. The lack of separation between church and state becomes evident once Meursault has been arrested. This is clearly demonstrated when the examining magistrate waves his “crucifix almost directly over [Meursault’s] head” and attempts to evoke a religious revival within Meursault (68).

If Meursault agrees to accept God and repent for his sins, he will be granted his freedom. Because Meursault does not succumb to the magistrate’s pressure and refuses to believe in God, he is reprimanded for having a “hardened” soul and reduced to an inhuman being, or as the examiner calls him, “Monsieur Antichrist” (70; 71). When Meursault rejects this offer and chooses to accept his execution instead, it is shown how he rejects the institution altogether suggesting that Meursault is against the symbiotic relationship between church and state that is present in his society. The type of harsh treatment Meursault receives for refusing to give in to the pressure from the magistrate is an example of the narrow-minded nature of those reviewing Meursault’s case. Those who believe that there exists only one true path of righteousness generate the inherent bias found in the justice system that Meursault rejects. The theme of religious symbolism is continued as this trial causes Meursault to become a martyr as he sacrifices himself to defend his beliefs.

He would rather die than try to accept religion and thus allow the unjust institution in which he resides to continue. In fact, in the final scene of the novel when he has accepted his death, there are examples of rebirth imagery that suggest Meursault is being reborn from a society that is afflicted by corruption. He talks about how he believes Maman would have felt at the end of her life. He describes how she “must have felt free then and ready to live it all again” (122). This reinforces the idea of rebirth in how he feels as though he is being set free from a life that made him feel imprisoned to a life that would free him from his morally corrupt society. His death is used to cleanse him of the immorality and injustice that the society around him has generated. In the final scenes of this novel, Meursault starts to become more at peace as he comes to terms with his impending execution. Throughout the novel, he is consistently plagued by the heat from the sun which is used to characterize the continuous immorality of the society that he lives in and the weight that this bears on him. However, when he becomes certain that he is going to die, he enters into a more relaxed and positive mental state, where the “salt air [is] cooling [his] temples” (122).

The use of the term “cooling” is used to juxtapose the intense heat that he had experienced throughout the novel and further the idea that he is being reborn through his death. Meursault’s execution suggests that the lack of separation between church and state is evident in his society and that it is necessary to escape this system of injustice. The societal construct of the justice system is further commented on through the flagrant racism towards Arabs that becomes prevalent in the novel and how that contributes to a lack of equality in the legal system. During the time that this novel was written, Algeria was still under French colonization so there were still tensions between the Arabs and the French. The novel only refers to anyone of Algerian descent as an “Arab”. This dehumanizes and reduces the Algerians to solely their culture. This dehumanization is used to represent the cultural and religious tensions between the two nations at the time as well as to comment on the way that this racism plays a role in Meursault’s trial.

When Meursault is sent to trial for murder, the actual murder of the Arab is not as frequently brought up as what would normally be expected. Rather, his inability to feel or find meaning in life is examined. The court continually questions why he never cried at his mother’s funeral rather than asking questions regarding the murder of the Arab. They compare the fact that he didn’t cry at the funeral to a parricide. The absurdity of this is acknowledged when Meursault explains that according to the prosecutor, “a man who is morally guilty of killing his mother severs himself from society in the same way as the man who raises a murderous hand against the father who begat him” (102). He compares a lack of emotion to murdering a parent. The fact that he actually murdered the Arab is rarely discussed due to the fact that the victim was an Arab and therefore not relevant in this society’s legal system. When Meursault accepts his execution, he is refusing to accept this society’s way of thinking and demonstrating his belief that society is skewed. Meursault serves as a character that doesn’t represent the society’s values and in this way, he acts as the protagonist of the novel. In the final scene of the novel, he wants to be “greet[ed] with cries of hate” (123).

This is because it validates his rejection of the ideals of the society he lives in allowing him to die peacefully. The idea of consciousness is also used to comment on the injustice of the legal system. Throughout the trial, Meursault remains indifferent to the hearings and simply states the truth. He describes his detachment from everything that’s going on around him when he explains that “[he] wasn’t really in prison those first few days: [he] was sort of waiting for something to happen” (72). This lack of awareness and his refusal to accept his imprisonment furthers his ignorance and his rejection of the justice system that he exhibits throughout the novel. He describes the justice system as “machinery” indicating how arrogant he believes the system to be (109).

The machine-like nature of justice denies its victims any fluidity in a trial and expects those convicted to readjust themselves according to the manner in which those in power have deemed acceptable. Meursault fails to do this which reaffirms his rejection of an unjust system and the commentary that Camus is making. When he finally meets the chaplain at the end of the novel, all of the consciousness he had previously been lacking comes flooding back in, overcoming him with emotion. He describes it as “something inside [him that] snapped” (120). This consciousness is what leads him to truly accept his death in the belief that he was dying for a just cause. He is overwhelmed with anger and the realization that “nothing, nothing mattered and [he] knew why” (121).

He realizes that life is not worth living if he is living in a society with a justice system that is blinded by power and racial and religious bias. The social construct of the justice system is heavily commented on throughout the novel, The Stranger. Rejection of social constructs allows Meursault to experience the world around him more completely without living in fear of death and rather accepting his death to become a martyr for a noble cause. By examining religion, race, and consciousness, the lack of justice in the legal system becomes evident.

The Stranger Throughout Albert Camus. (2021, Dec 03). Retrieved from https://studymoose.com/the-stranger-throughout-albert-camus-essay 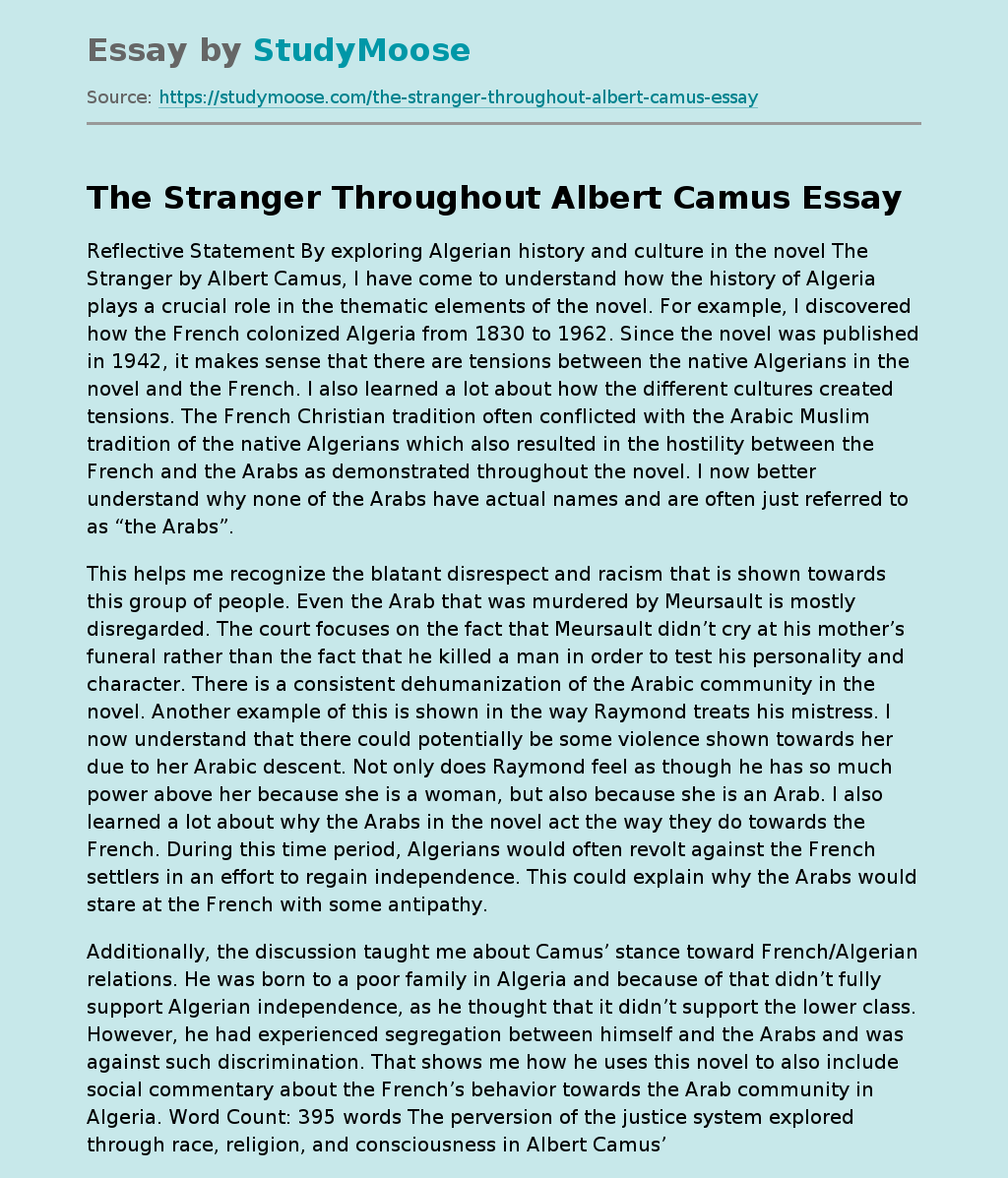