Existentialism in Camus' "The Stranger"

Existentialism is often defined as a philosophical movement or tendency, emphasizing individual existence, freedom and choice. As a result of the diversity of positions associated with this term it is impossible to define precisely. There are, however, basic themes common in existentialist beliefs. As is evident through the root of the word, exist, there is a stress on definite individual existence and freedom of choice. Developed between the nineteenth and twentieth centuries, this ideology influenced literature greatly. A prime example of the incorporation of certain aspects of existentialism is witnessed in Albert Camus’s The Stranger.

Don't use plagiarized sources. Get your custom essay on
“ Existentialism in Camus’ “The Stranger” ”
Get custom paper
NEW! smart matching with writer

The use of existentialism within his work assists in the development of his characters; it determines how they will act and respond to their surroundings. The aforementioned actions are often unique due to the influence of existentialism. Meursault is the major character in The Stranger. He is considered the personification of existentialism, the existential hero if you will. He is emotionally indifferent to others and, as the prosecutor of his case words it, “a coolly calculating monster.

” Meursault is alienated from society throughout the tale as he accepts individual responsibility for his unique progression.

Throughout Camus’s The Stranger there are references to an event that occurs at the outset of the novel and exhibits ideals inherent to existentialism: the death of Meursault’s mother. His insensitivity is introduced through the emotions, or lack thereof, that he displays upon news of the death of Maman. He seemingly cares not for his own mother as is shown in his opening statements: “Maman died today.

Or yesterday maybe, I don’t know. I got a telegram from the home: ‘Mother deceased. Funeral tomorrow. Faithfully yours.’ That doesn’t mean anything. Maybe it was yesterday.” He is more concerned with the time of the death rather than the fact that he has just lost a loved one.

In addition, Meursault is more concerned about his surroundings at the home and in the mortuary, rather than the fact that his mother lies dead in a casket, several feet from him. As the caretaker proceeds to approach the casket so as to give Meursault a last look at his mother, Meursault himself stops him. As the caretaker asks just why he requests the casket left closed the only reason Meursault can give is, “I don’t know.” During the funeral procession he seems much more alert to the suns rays beating down on him, choosing to forget where he is and the task at hand. The lack of compassion and refusal to behave the way society expects him to act are what essentially make him an existentialist.

Several mundane yet life altering events are also taken into account by Meursault in an existential attitude. He meets a woman named Marie while swimming the day following Maman’s funeral. Despite the death that had just occurred, he finds joy in her company and does not let his loss bother him. Later on, Marie inquires as to whether Meursault would be interested in marrying her. In response he states, “I said it didn’t make any difference to me and that we could if she wanted to.” Such an insensitive response is intrinsic to the beliefs of an existential. This is only exemplified as he answers the same way when she queries him on his love for her. Marriage is considered by society to be an important event in life yet Meursault wanders from the beaten path, in an example of the theory of existence preceding essence or that one is in control of their own destiny.

He demonstrates this belief once again as his boss offers him a chance to move to Paris where he would attain a change in life. Meursault is indifferent on the subject as he does not desire more and was not dissatisfied by what he had now. The boss was upset at this turn of events and Meursault simply returned to work stating, “I would rather not have upset him, but I couldn’t see any reason to change my life.” He gives no rational explanation as to why he would want to change his life or not, only that it was not important and one life was just the same as another, showcasing another basic standard of existential belief.

The climax of the book comes during Meursault’s trial for the murder of the Arab and yet another rendition of existentialism is divulged. Camus begins to ridicule the legal system as his characters trial continues, making apparent the fact that Meursault is truly an outsider. Camus conveys this by making Meursault feel out of place at his own trail and rushing it along as if it is a minor insignificance. The prosecutor’s main base of offense is that Meursault did not exert emotions during his mother’s funeral, for he was guilty. The prosecutor alienates him because he had not followed society’s current misconceptions when confronted with a situation that one was supposed to grieve during.

In his closing arguments, the prosecutor says, “But here in the wholly negative virtue of tolerance must give way to the sterner but loftier virtue of justice. Especially when emptiness of a man’s heart becomes, as we find it has in this man, an abyss threatening to swallow up society;” as if to say that the murder of the Arab was a direct result of the stoic mindset Meursault held at Maman’s funeral. Once again society has rejected him by distorting the truths of the case and trying him for that single event rather than that which he was convicted for. In making Meursault a stranger from society and the legal system, Camus reveals his philosophy of existentialism.

The highly influential effect of the existentialist beliefs on the literature of the twentieth century is clearly revealed in the overall content and mood within Camus’s The Stranger. The character of Meursault exhibits a bold existentialist attitude throughout the story that, on several occasions, explodes forth in a sharp contrast to his normal submissive personality; a most noticeable occasion being his outburst during his episode with the chaplain when he snapped after having an epiphany. It did not matter that he was being killed and the chaplain living another day, for he had lived his life and taken hold of his fate; therefore was certain as to what would come. The chaplain had his empty prayers but Meursault was sure of himself; his life and his death. Another notable occasion in which he offers an outlook on existentialism is during his stay in prison. He no longer had anyone or thing to worry about but himself.

He is able to dissect himself and examine what his future will bring, and experiences several emotions often grouped with existentialism; the most outstanding being fear and anxiety. Society had declared Meursault absurd because of his unrelenting uniqueness and through this, the title of the book may be derived. Meursault has become a stranger in his own world, a social outcast punished for crimes which are both ridiculous and yet the norm. Camus, through his utilization of Meursault, has thoroughly explained the absurdities of life and how they, along with the actions of Meursault, thoroughly portray his existentialist beliefs as they were meant to be. By supplying Meursault with the nature to rebel against preconceived misconceptions, Camus has managed to provide the reader with the ability to easily decipher and gain insight to the ideals of an existentialist.

Existentialism in Camus' "The Stranger". (2016, Jul 08). Retrieved from https://studymoose.com/existentialism-in-camus-the-stranger-essay 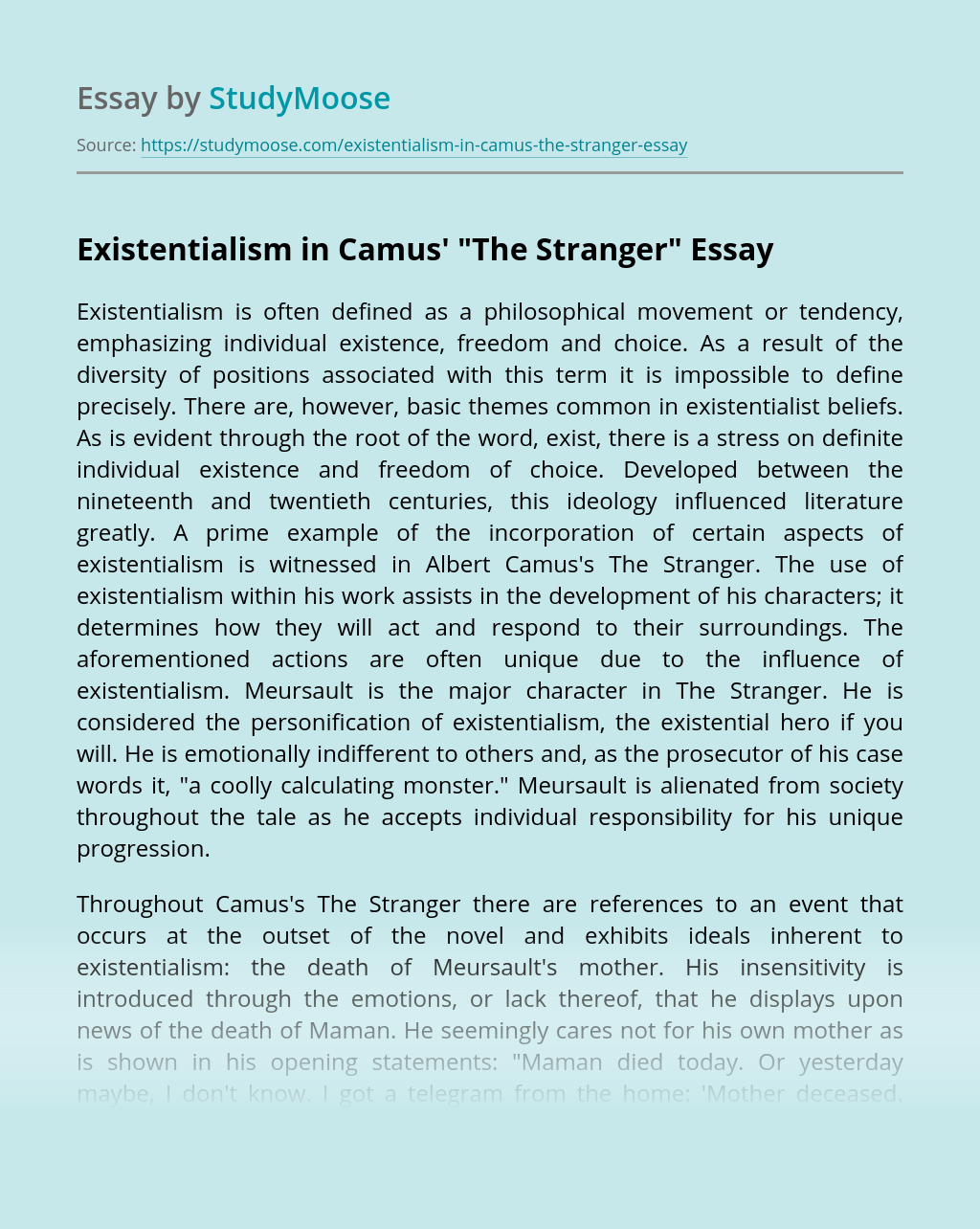