Was Andrew Carnegie a Hero

What’s a hero to you; Superman, Batman, Spiderman? Apart from their supernatural powers, a similarity that they share is the great beneﬁcial change they had brought amongst their societies, which led to them becoming “heroes”. Andrew Carnegie, a man you could use as the deﬁnition of “multi-millionaire”, was indeed a hero . He became one of the most successful businessmen not only by renovating the American steel industry through a process called vertical integration or creating jobs for millions of people, but also by being an indulgent philanthropist.

Don't use plagiarized sources. Get your custom essay on
“ Was Andrew Carnegie a True Hero DBQ ”
Get custom paper
NEW! smart matching with writer

He was a true hero.

Andrew Carnegie didn’t come from a rich family; he was born into a poor family in 1835 Dunfermline, Scotland. As soon as he immigrated to the US, he started working immediately and grew up to create one of the largest steel manufacturing companies called the Carnegie Steel Company. Carnegie truly reached the American dream which could be shown through his purchase of the Skibo Castle (Document 1).

How did he become such a successful businessman? Well that’s all thanks to his method of mass producing steel and selling it at cheap prices through the integration of all suppliers of raw materials into his company; he called this system vertical integration (Document 5).

Through this, he was able to open up many jobs which would employ millions of jobless citizens in the United States. Furthermore, through his control of all of the processes Andrew Carnegie donations was able to decrease the price of steel to be more affordable for commoners (Document 4).

This was all possible because Carnegie believed that Social Darwinism was essential in any civilization and lived by the motto “If you work harder, you will succeed” which motivated him to work so hard to become

one of the most successful businessmen (Document 2). Through his success he opened up jobs for millions people, gave people hope that they could also become wealthy and even helped the United States become the most powerful in the steel business.

Not only this, but Andrew Carnegie was also one of the most charitable of the wealthiest people in the world. Through his statement “..a man who dies rich dies disgraced” we could clearly get the sense that Carnegie was a man who thought of ﬁnancial largesse as an essential part of a rich man’s career (Document 8). Carnegie’s philanthropy can clearly be seen through records of his donations, truly proving him to be a man of his word (Document 9). Even now, the Carnegie Corporation’s foundation is currently giving out about $100,000,000 a year mostly to education. Not only was Andrew Carnegie a successful businessman who accomplished the American Dream, but he also used the immense amount of money that he earned to improve the whole community through his generous givings.

Andrew Carnegie, one of the richest multi millionaire company owners, was indeed a national hero since he brought great beneﬁcial change among his society; he assisted in the United States becoming the leading power of steel manufacturing, opened up millions of jobs to unemployed Americans, and even donated large portions of his annual income to provide aid in the welfare of the whole nation. Andrew Carnegie was a man who died rich, however he did not die disgraced. He died honorable and wealthy. 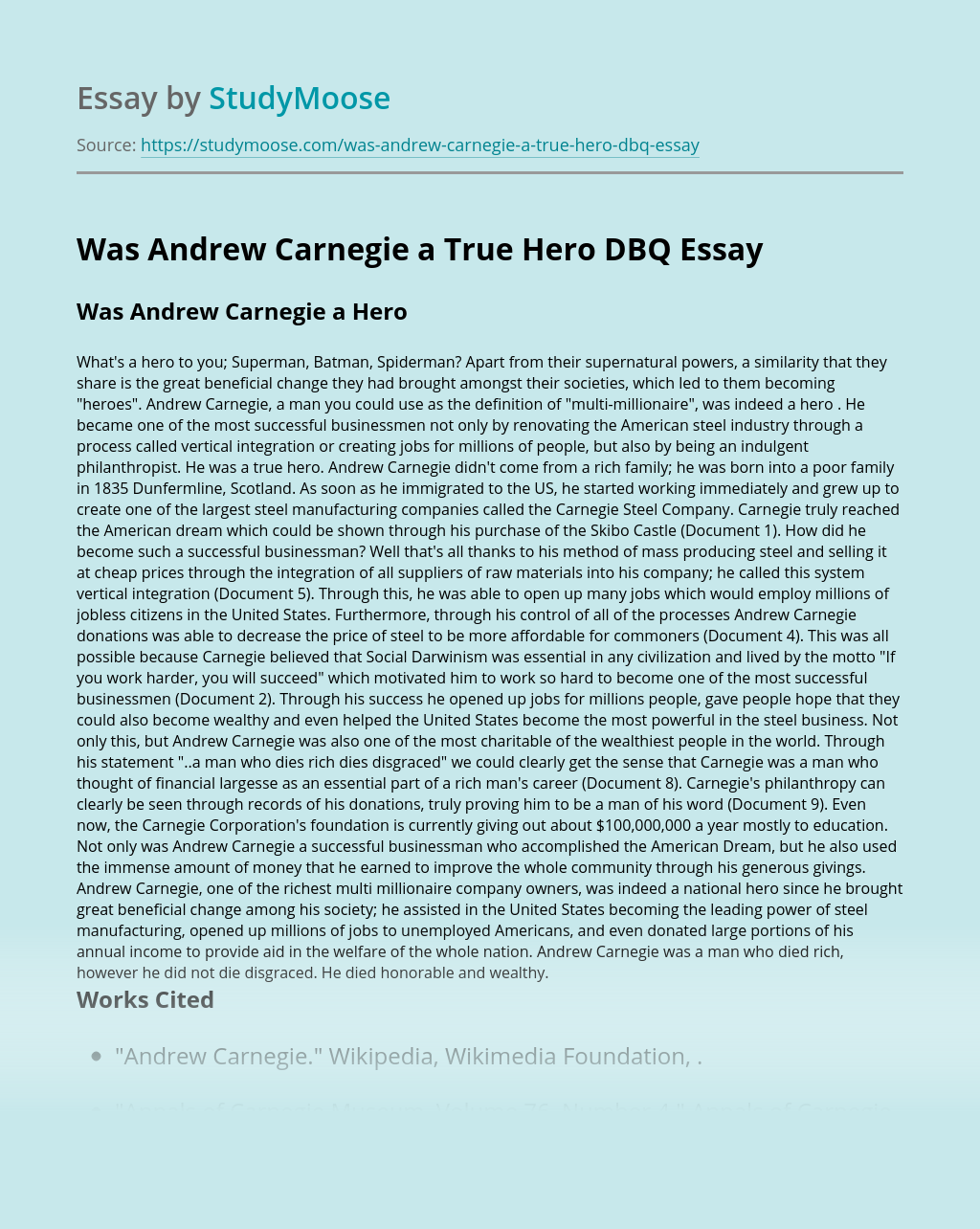