Heroes are often stereotyped as fairytale characters who are endowed with supernatural powers that make them strong and buff. In reality, a hero can be an ordinary human being who strives to do extraordinary things to help others and make a difference in the world. A true hero not only possesses the qualities of strength and bravery, but also embody selflessness, morality and perseverance, essentially becoming a role model for all of those around him or her. Oprah Winfrey is just one example of an average person in our society who fits the characteristics and role of being a hero.

Don't use plagiarized sources. Get your custom essay on
“ Oprah Winfrey: A True Hero ”
Get custom paper
NEW! smart matching with writer

She has devoted her time, skills, attention, and resources towards making the world a more prosperous place for others by educating, motivating, inspiring and rescuing people all over the world. Through the great generosity of Oprah’s Angel Network and the construction of the Oprah Winfrey Leadership Academy for Girls in South Africa, Oprah Winfrey has proven herself to be a true role model and inspiration to all by her selfless deeds that make her a true hero of our times.

To begin with, Oprah Winfrey was born into poverty to a single mother in Mississippi and faced many difficulties and grievances throughout her childhood years. She was sexually abused by her uncle, cousin, and family friend and became pregnant at the age of fourteen; her son died a short while after. Oprah then moved to Tennessee with her father where she began her career in the entertainment business. Her career began with a job on the radio at the age of nineteen and eventually led to the creation of the Emmy-winning talk show “The Oprah Winfrey Show.

According to Forbes Magazine, in 2003, “Oprah became the first African-American woman to reach billionaire status, breaking through cultural, geographical and gender barriers, letting the world know it’s not your circumstances, but your heart that determines how far you go in this world. ” As Oprah’s name became more widespread, so did her generosity. The Oprah Angel Network began to donate one hundred thousand dollars for the “Use Your Life Award” to all of those who dedicated their lives to helping others and had numerous achievements regarding humanitarian issues.

Furthermore, she regularly gives charity to organizations such as AIDS Foundation of Chicago, Children’s Memorial Hospital and the Chicago Academy of the Arts. In addition to those organizations, Oprah has also gave out her sincere wishes and help to those poor souls who have been affected by the Tsunami and Hurricane Katrina. She donated over one million dollars to the Tsunami relief fund and ten million to those who were gravely affected by the disaster of Katrina. Growing up with a childhood full of hardships and being able to overcome them truly makes Oprah Winfrey an inspiration to everyone.

Her selflessness, generosity, and general love and compassion for human kind has brought so many changes to our society that cannot be overlooked. Her immense perseverance and selflessness are just two contributing factors that make her the person she is today; a hero. Most importantly, Oprah’s dedication to helping under privileged students obtain their education makes her a role model and symbol of hope for children all around the world. She created the Oprah Winfrey Leadership Academy for Girls in South Africa, where girls learn to use their full capacity to become excellent decision makers and the next leaders of our generation.

The best African American teachers and administrators will be appointed in this school to help the girls excel in their knowledge and education. Not only is she the founder of the school, but the Oprah Winfrey Foundation contributed ten million dollars to maintain it as well. Oprah is helping to fight the battle against illiteracy one step at a time, and through her actions against it, she creates a foundation that many other people can follow. By giving so much importance to education, she becomes an inspiration and motivation that encourages girls all around the world to pursue their education further.

By providing education, Oprah is empowering girls everywhere and giving them more options in their life than they ever imagined. As Oprah once stated, “Education is the path to the future. I believe that education is indeed freedom. With God’s help, these girls will be the future leaders on the path to peace in South Africa and the world. ” Once again, Oprah proved herself to be selfless and moral woman who persevered in becoming a role model for all of those around her. Her generosity is now the reason that girls in South Africa actually have a chance to make something of themselves and to receive an education.

With one simple donation, she changed the lives of thousands of girls and created a brighter, much better future for them than they could imagine. By doing such deeds open-handedly and without anything in return, Oprah Winfrey is a genuine hero of our society.

In conclusion, heroes are not people like Superman or Batman, but rather those who do everything in their ability to make the world a better place and Oprah Winfrey is just one of many who fit the criteria of being a true hero. She is engulfed around being selfless, moral, brave, perseverant, and a role model and inspiration to everyone around her.

The generosity of Oprah’s Angel Network has helped many impoverished people and even led to the construction of the Oprah Winfrey Leadership Academy for Girls in South Africa. With donations like these, Oprah has literally changed the future for African American girls in South Africa and helped them become more independent. She is now looked upon as a symbol for hope and a prosperous future because of all of her charity work concerning humanitarian issues. Heroes like Oprah Winfrey inspire everyone with their openness and compassion, essentially becoming a symbol for hope with their vision for a brighter and better future. 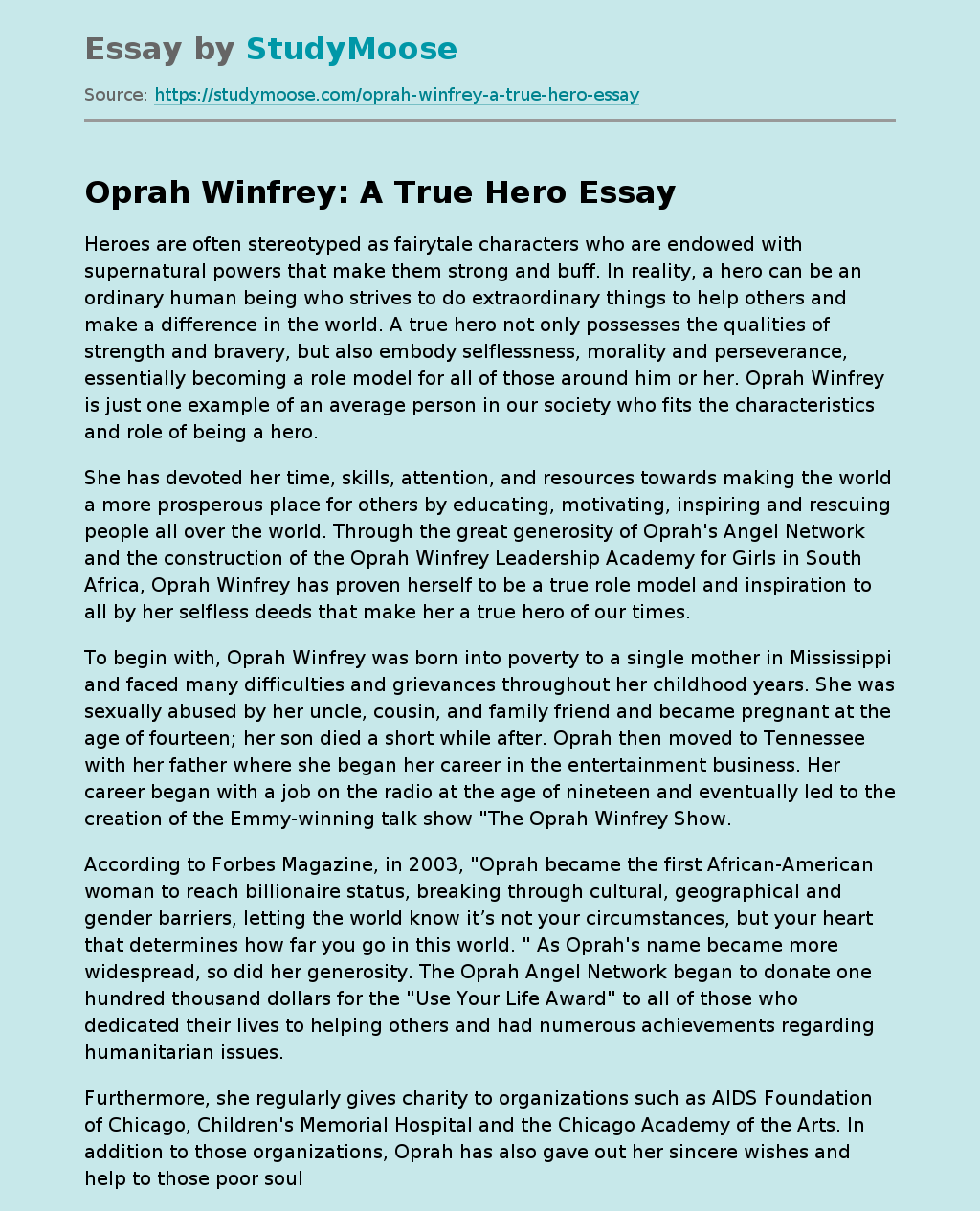