In life there are people that succeed and there are some that don’t. Those who succeed are usually perceived as heroes. We admire them, we are inspired by them, and hope that one day we ourselves can become such great influence to others and have the same big impact on people’s lives, as they did. Well, at least, I do. The people who truly bring greatness to our societies and one such person is my hero. Her name is recognizable to many: Oprah Winfrey; and she has been my role model in numerous ways.

Don't use plagiarized sources. Get your custom essay on
“ Oprah Winfrey: Biography and Life ”
Get custom paper
NEW! smart matching with writer

Oprah Winfrey is perhaps the most influential persona of the new century and she has every reason to celebrate about it, since she has conquered the tops of popularity without losing her humane side on the way. Who could even have imagined that a girl born in poverty and having felt her tender childhood years been torn apart from multiple sexual abuse, would have created a multi-winning award winning, high-rated talk show performing live from the very heart of the U.

S? Oprah is by far the wealthiest African-American, В that never forgets people’s misery and never turns her head away from other people’s sorrow, and a woman with power to even move mountains.

IВ have heard so many things about her and such glorifying words from people that have been around her that I had started to question their validity. Could it be that she was THAT good? Well, all my queries ended when I began to watch her videos and shows.

Who would not love this Woman? By age 19, she already had a talk show. She became a manager to her own production company. What is worth mentioning, is the fact that Oprah never stood still. She would always seek out for truths, spiritual techniques and practices that could improve her inner self, alongside her outer self. She enriched her shows withВ topics, that she share valuable with people. It comes naturally, that every successful individual meets criticism from those that see a black woman trying to prevail in world dominated by white males.

Seeing life’s ugly face at such a young age as she did, anything that would come her way would probably seem like an issue of minor significance. Leaders, after all, are an entirely different paste of human beings that seem to have seen the whole picture of life and care little about any clouds darkening their background. I cannot even imagine how she must have felt when she had no clothes to wear and used potato sacks to cover her body, This was very emotional to me. While the other kids were teasing and laughing at her. This incident alone could scar a small child. I have seen a similar case with a child coming from a poor background that could not stand and cope with peer pressure and committed numerous suicides to end their life. It is never easy to deal with pain, either physical or emotional. Oprah managed to pull her head out of the water, and used media to redirect her passion for life and giving. Having gone through television, films, live shows, radio, publishing and writing, and celebrity interviews, 32-year old Oprah was included in the world’s millionaires’ list, only to earn a place in Forbes 400 at the age of 41, as the African American that had replaced Bill Cosby on the word’s 400-richest people’s list, with $340 million of net worth.

Her life inspired a Professor teaching at the University of Illinois, who created a brand new course under the title: History 298: Oprah Winfrey, the Tycoon. The World renowned networks, like the CNN, consider Oprah the most powerful and inspirational woman in the globe, and is recognized for her contribution to introducing the world to a new form of media communication, where people talked their problems out loud, rather than pushing them inside, creating a form of therapy for them. She dared to talk and raise awareness about matters that public opinion was not ready to accept yet, like gay acceptance, back in the 90’s. However, this whole attempt of confessions and therapy, as aforementioned, would not have been crowned with success if Oprah had not taught by example.

For that reason, she was the first one to admit having weight control problems and allowed herself be seen crying live publicly when she would talk about a burdening issue. If others had been through the hell Oprah had got into in her younger years, it would be unlikely they would still haveВ kindness and compassion for others. Oprah managed to leave all bad things behind and opened her inner self to goodness. She was steadily ranked among the 50 most generous citizens of the United States, from 2004 until 2010.В She donated approximately $400 million on scholarships and another $400 million on other educational purposes. Many people tend to look at her current success, People probably thought she had this ole so good life not knowing her childhood growing up. She manage to look past her past. Many teenagers go through the whole moving around process, yet don’t see what value can come from it. And also, many teenagers believe that fame and success will just happen to them, without actually finding any resources or acquiring any skills for it. There are really too many words to describe Oprah.

She gives Charity, not only to the ones she touches but to all of us women and men who look at her and say, how she can do it all?В And really it is quite impossible for all of us to understand why she does it.В But what I do understand is that she gets it done. В Oprah is my Superwomen, maybe not the one on T.V, but in my hearts. Oprah Winfrey has many admirable qualities that I admire. She is very educated, rich and influential. She has influenced me to work hard despite any need I may endure during the process. You can look at her experiences and be motivated to move forward in life. Its so surreal to have a hero you love and adore and you had actually met in real life. Oprah Winfrey has definitely won the recognition as one of the world’s most generous and influential women that rushed to help all those in need without letting her troubled and painful past hold her back. 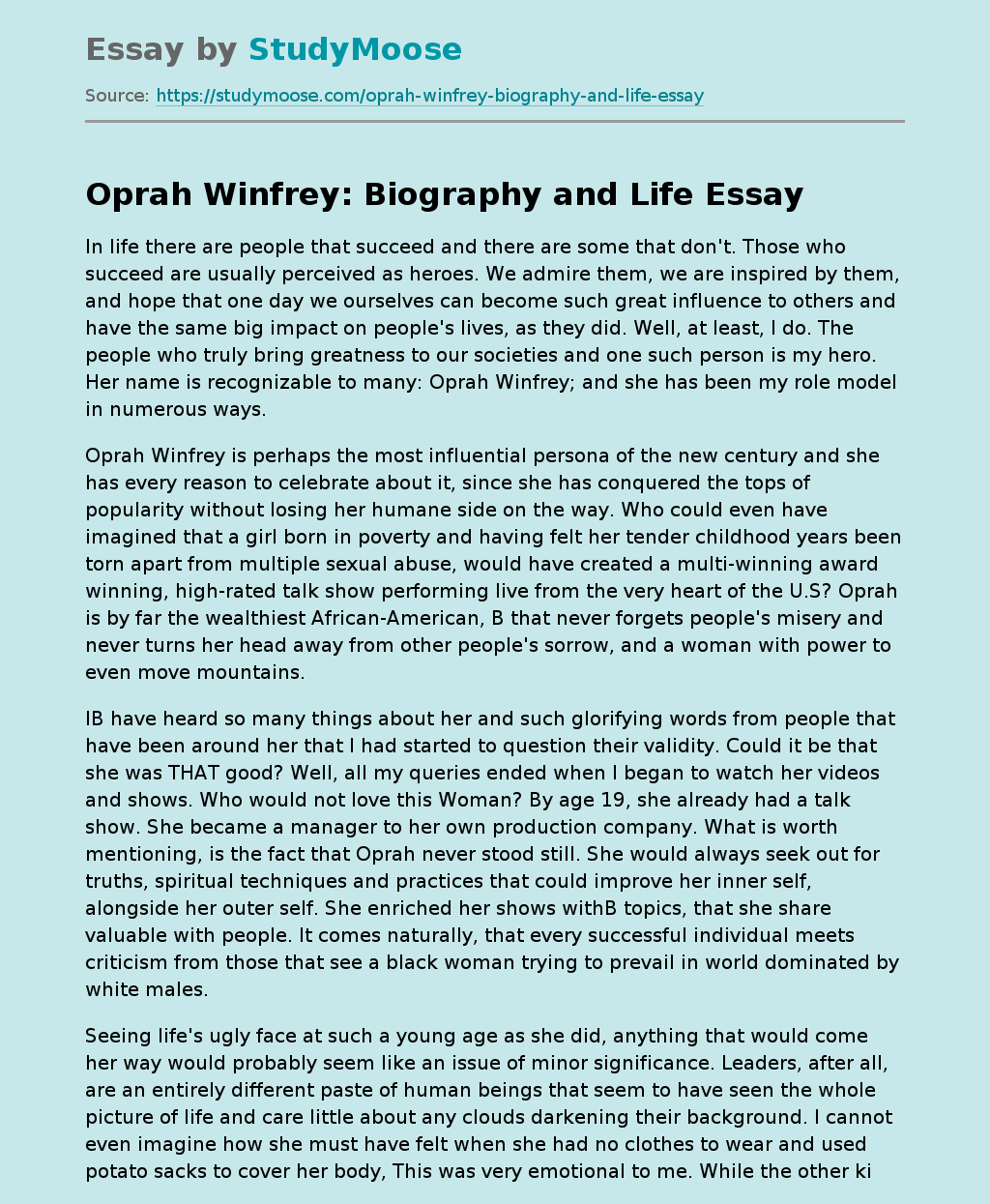