Did Napoleon Do More Harm Than Good To Revolutionary France?

I think that Napoleon brought up France, from its most terrible status, to the very height in just a few years time. He was a military hero who won victorious land-based battles which ended Napoleon ruling most of Europe. He was a man that believed in himself and had his goals set for his own country, he had great self-control and knowledge; he was a master of strategy and in my eyes a genius. Even though Napoleon as great as he was, something about his way of governing France still go around people’s minds.

Don't use plagiarized sources. Get your custom essay on
“ Did Napoleon Do More Harm Than Good To Revolutionary France? ”
Get custom paper
NEW! smart matching with writer

Did Napoleon go too far? Did he do more harm than good to Revolutionary France? After all his success in his military campaigns, did he satisfy the need of the people in France and their ideal towards the French Revolution? This is one of the main discussions we had in class and now that we are studying Napoleon and the French Revolution we will base our thought on our research.

In this essay, I will discuss my opinion on whether Napoleon did more harm than good to Revolutionary France and background information.

Napoleon’s heroic acts of bravery and leadership at the National Convection caused Napoleon a lot of sudden fame. This alarmed the interest Joséphine de Beauharnais who Napoleon married on the 9th of March 1796. The marriage brought a positive influence in political circles for Napoleon. Days after marriage Napoleon started the invasion of Italy on the 27th of March 1796. With this invasion Napoleon drove the Austrians out of Lombardy and defeated the army of the Papal States as there was protestation by Pope Pius VI concerning the execution of Louis XVI.

In early 1797 Napoleon led his army to Austria and had forced power to sue peace, causing the Treaty of Campo Formio to give up Austrian Netherlands, the so-called “Low-country” and Rhineland. This also caused France to control Northern Italy.

Napoleon was starting to build up an Empire, and as one of his long-term goals was to take over Britain, Napoleon leads an expedition into Egypt with the goal of seizing the country and the Ottoman Empire. Trying to eliminate Britain’s access to India and keeping Frances trade interests up. He soon seizes Malta and reaches Alexandria with the British in his neck. At the coast of Egypt his first battle started at the coast with the Mamelukes, where Napoleon was greatly outnumbered but came out to be victorious in the battle due to his great intellect and strategy. Many battles followed in the goal of trying to seize Egypt. With Britain opposing the French and finally compensating at sea with Napoleon, having found the war-ships, Napoleon built up a strong line of defence at the bay of Abukir surviving the attack. Napoleon still succeeded to take over power in Egypt although there were consistent uprisings.

Back in France, the country wasn’t doing economically well and there was political unrest. This forced Napoleon to return back to France and leave his troops to General Kleber. France needed a man, who could help France out of the chaos it was undergoing and Napoleon saw himself as that man. The Government was pushed out of power due to a coup d’état and Napoleon was elected to be in the First Consul making him the most powerful man in France. Napoleon made some very positive changes in my eyes to help France back up onto her feet. Due to the Revolution many schools closed. Good education was only available to the clergy and the nobility, re-opening the school Napoleon drastically changed this thought. As Napoleon believed in a good education for any type of person he therefore re-opened the schools at lower prices. He set up High-school for the more intelligent and gifted students regardless of what financial class they belonged in, Napoleon also required the youth to go to school for several years. Nevertheless, Napoleon changed the civil code with the best of help he could get.

He set up his own committee of scholars who had a draft produced of the Civil Code considered by the Council of State who eventually considered the draft after long meetings. The Civil Code was to have various important points: There were to be different rules in marriage, the women were given more rights although the husband still remained superior in the family but with respect to the wife and children. The state and the church would be separated and clergy privileges were to be taken away preventing Papal influences within the country. Freedom and choice of religion was allowed so long with equality and individual freedom. Many Governmental Nationalists were not pleased with the renewing of the code. This was a big step for France to help her stand back up on her feet and therefore the code was finally to be approved in 1804. The code was later renamed to “Code Napoleon” as he had a great part concerning the reformation of the Civil Code.

He gave the people of France hope by exchanging the coins to paper bills. Napoleon introduced lottery to France, also having an impact on the economical standards, as the nobles would take most part in this new introduction. France was literally undergoing an economic miracle, as France got rid of her debts in such a short period of time. Napoleons fame grew as he reformed France’s economy.

Now that Napoleon’s fame and popularity was enormous in the French society, some might say his ego rose as he crowned himself as Emperor. Napoleon just wanted to expand France as much as he could and with this his long-term goal had to be achieved, taking over Britain. He had his very own plan into achieving this and therefore made up the Continental System. This was a trade system which would ban Britain from trading with any other countries, meaning they would go in debt, making it easier for Napoleon to rule. To fulfill this system neighboring countries had to go into agreement, but they refused Napoleon’s system. One of these countries that revoked the system was Spain. Napoleon was at the time in war with Russia as they tried trading with England.

Anyways, Napoleon put his brother Joseph to throne as Napoleon himself went to Spain with his troops, to seize the country. This was the big mistake Napoleon made, and caused his downfall. As he was in war with Russia he lost over 550,000 men, weakening the French army. Trying to build up his army again Napoleon started replacing foreign rulers under his army. A year later in 1813 after attacking Russia a group of countries gathered together to take Europe back under their control and to eliminate Napoleon once and for all. The group consisted of Britain, Russia, Spain, and Portugal being joined by Austria and Sweden later on in battle. This caused the end and downfall of Napoleon on the 28th of April 1814.

Now the question surfaces again: Did Napoleon do more harm than good to Revolutionary France? My opinion is no. Although Napoleon might have been a bit egocentric due to his overconfidence as in expanding France and wanting to rule more. He was a man of his country and I give him great respect for that, as he brought up France from an economical disaster to a debtless country. He provided and improved education for everyone. He might have been a dictator but that is what France needed at the time. Politics where a disaster as they couldn’t make up their mind about anything and kept on arguing not coming to compromises, but Napoleon rescued France from the total downfall and took the measures that needed to be taken.

What he did was years ago although he still left traces of his powerful leadership behind towards making France a better country. The “Napoleonic Code” basis is still being used in France today, and this just proves how intelligent he was in making France financially independent. At the time under the severe circumstances of the Revolution he might have seemed like a tyrant but in other eyes a savior. What he tried to do might have seemed unfair trying to eliminate certain countries and trying to have absolute power, but I think Napoleon should be remembered as the Savior of France, and a war-hero.

“Even when I am gone, I shall remain in people’s minds the star of their rights, my name will be the war cry of their efforts, the motto of their hopes.” – Napoleon BonaparteBibliographyBeck, Roger B. World History – Patterns of Interaction. USA: McDougal Littel Inc., 2001.

Did Napoleon Do More Harm Than Good To Revolutionary France?. (2016, Jul 05). Retrieved from https://studymoose.com/did-napoleon-do-more-harm-than-good-to-revolutionary-france-essay 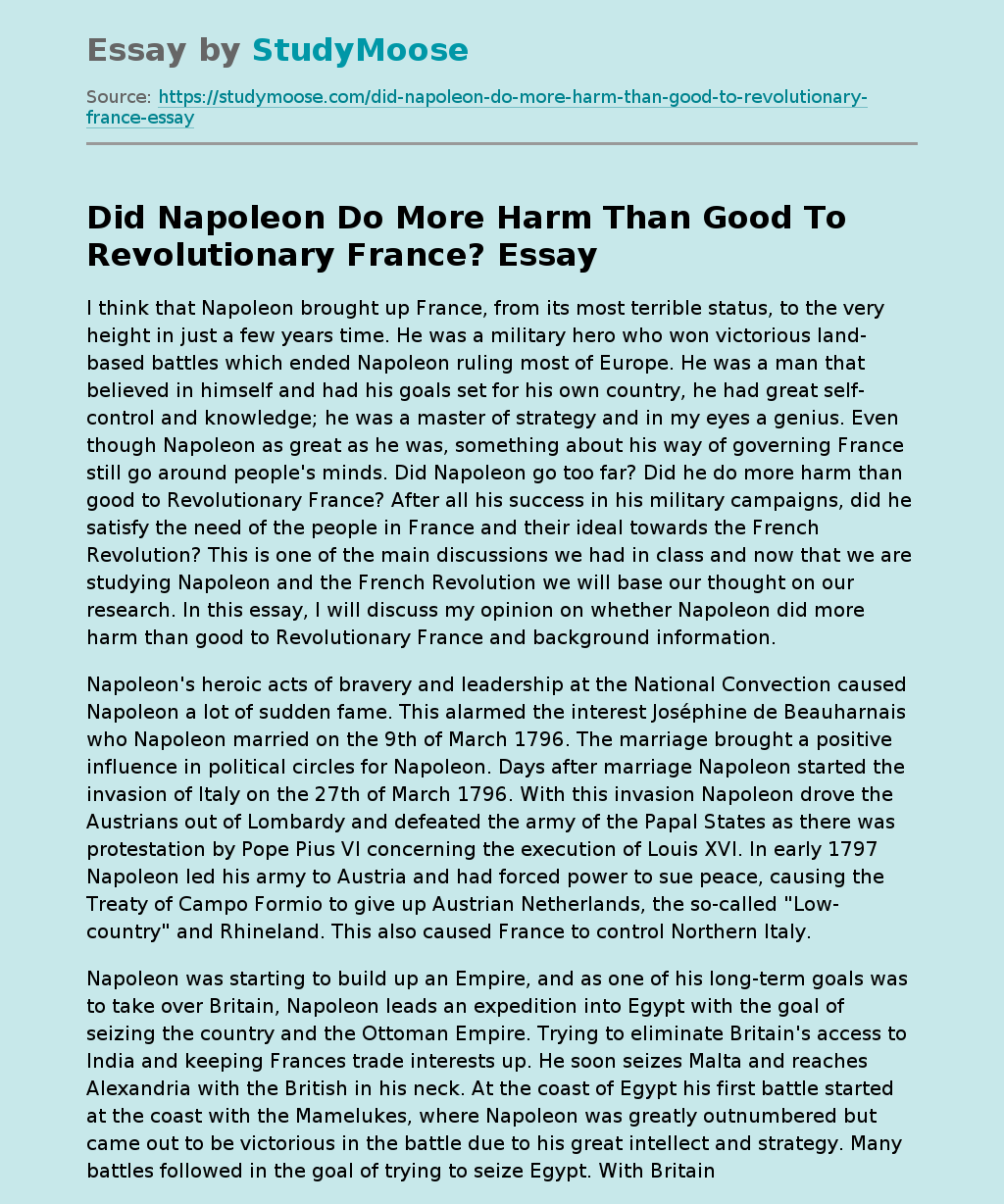