The ideals of the French Revolution were “Equality, Liberty, and Fraternity,” but the methods that were used to fulfill these goals were complicated. During the Reign of Terror, about 40,000 people were guillotined because of Maximilien Robespierre. He thought that “Liberty could not be secured unless criminals lose their heads”. Napoleon Bonaparte, a Revolutionary hero, seized control of the government in France in 1799, he was looking to bring peace to the French people by ending the Revolution. For this to be done, he had to be in complete control like a monarch or a dictator.

Don't use plagiarized sources. Get your custom essay on
“ Napoleon Bonaparte DBQ ”
Get custom paper
NEW! smart matching with writer

However, the French people still wanted to have some of the privileges they had during the Revolution. Napoleon Bonaparte stabilized and united French society, yet supported the ideals of French Revolution.

Peace came to France with Napoleon’s strong rule. After making himself a consul for life, he re-established the French monarchy, naming himself Emperor Napoleon I in 1804. He centralized French government by appointing new officials, made tax collections more efficient, and created a National Bank.

He believed that he was chosen by God to be in power and made others believe it through the Napoleon Catechism. It showed the French people that Napoleon was blessed to get the throne. “·he whom God had raised up under difficult circumstances to re-establish the public worship of the holy religion of our fathers and to be the protector of it” (Document 7).

Napoleon brought civil rights back to France through codes and treaties that talk about revolutionary ideals. The Napoleonic Code is an example.

It recognized the equality of all citizens before the law, protected property rights, safeguarded employers by outlawing trade unions and strikes, and supported religion. Napoleon also signed the Concordat of 1801 with the Pope to reverse the dechristianization attempts made during the “Republic of Virtue.” Napoleon was not a religious man, he realized that most people needed to practice their faith. This made the Catholic Church an ally and they retained the power to nominate bishops, in return, the Pope agreed to recognize the accomplishments of the Revolution and to not question the ownership of the land that had been distributed back then.

Napoleon wanted to be the emperor of all of Europe. This could be foreseen in Jacques Louis David’s painting of Napoleon’s Crossing the Alps (Document 4), where he was portrayed with power, strength and an iron fist. He was a short man, but had an extremely large ego. He controlled a strong army and conquered much of Europe. His empire was made up of the Italian and German states, Spain, Western Russia (for a short amount of time), and Switzerland. With all his power, he still did not mistreat the citizens of the newly conquered territories. He abolished feudal rights and the internal trade barriers in Spain with his Imperial Decree at Madrid in 1808. Napoleon’s concern for the inhabitants of Westphalia was expressed in his letter to Jerome Napoleon in 1807: “I want your subjects to enjoy a higher degree of liberty, equality, and prosperity hitherto unknown to the German people” (Document 7).

Napoleon’s monarch rules stabilized and unified French society, as well as supported some of the ideals of the French Revolution but, Napoleon considered himself friendless and Count Mole perceived the thought behind Napoleon’s actions as “nothing but his own gratification, of magnifying himself and his power without limit and without rest” (Document 2). The middle class, who had fought a bloody revolution to end absolute rulers, tolerate Napoleon’s ways. With Napoleon in charge their ideals and rights were safe, they would accepted more his policies and given up some of their basic civil rights. 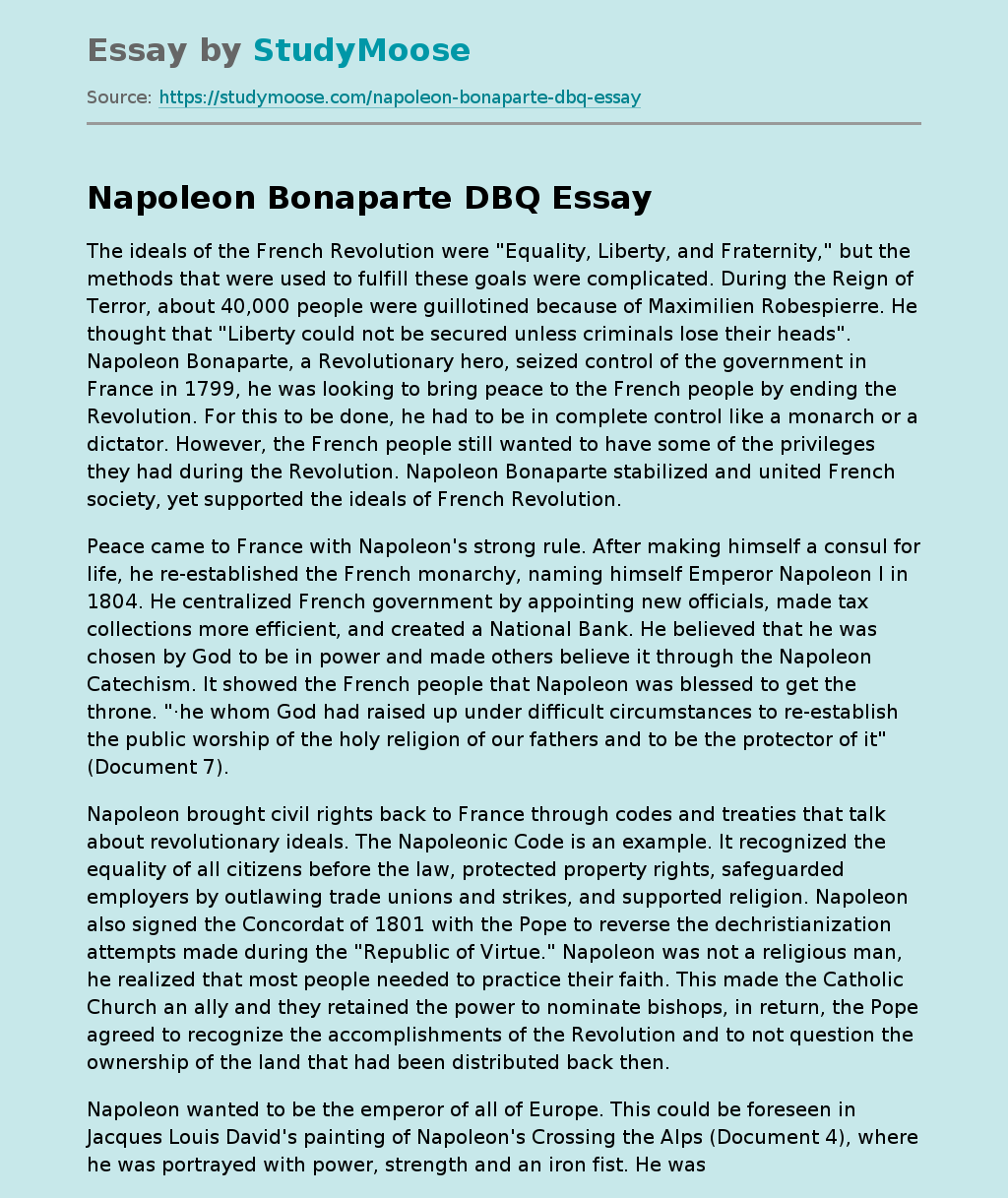