In 1784 to 1785 Napoleon attended the Ecole Militaire in Paris. That was the place where he received his military training. He studied to be an artillery man and an officer. He finished his training and joined the French army when he was 16 years old! Soon after that his father died and he was left with the responsibility of taking care of the huge Bonaparte family. Napoleon was stationed in Paris in 1792. After the French monarchy was overthrown on August 10, 1792, Napoleon decided to make his move up in the ranks.

Don't use plagiarized sources. Get your custom essay on
“ Napoleon Bonaparte Rise to Power ”
Get custom paper
NEW! smart matching with writer

After this, Napoleon started becoming a recognized officer.

In 1792 Napoleon was prompted to the rank of captain. In 1793 he was chosen to direct the artillery against the siege in Toulon. He seized ground where he could get his guns in range of the British ships. Soon after that Toulon fell and Napoleon was promoted to the rank of brigadier general. In 1795 he saved the revolutionary government by dispersing a group of rioting citizens by using his famous “Whiff of grapeshot” – He loaded a bunch on pellets into a cannon and fired it at the crowd.

Napoleon was made commander of the French army in Italy. He defeated four Austrian generals in succession, and each army he fought got bigger and bigger. This forced Austria and its allies to make peace with France. But after this Napoleon was relieved of his command. He was poor, he was suspected of treason, he had no friends. No one would have suspected what Napoleon would do next.

In 1795 Napoleon was appointed to put down a revolt in Paris. He calmly took complete control of the situation. He just had his men shoot all the rebels in the streets. The French government was saved, but they decided to form a new government called the Directory.

Under the new government Napoleon was made commander of the French army in Italy. During this campaign the French realized how smart Napoleon was. He developed a tactic that worked very efficiently. He would cut the enemy’s army in to two parts, then throw all his force on one side before the other side could rejoin them. This method was extremely effective against the Sardinian troops, because he defeated them five times in 11 days!! This made the King of Sardinia to try to make peace. Napoleon could not be stopped. He was a fast thinker who moved his troops extremely fast. Soon, instead of taking the defensive position Napoleon started taking the offensive position and thus, he started his conquest of Europe.

He started his attack on Austria. It was his first big campaign. During one attack he showed his bravery by forcing his way across a burning bridge. After that his troops gave him the name Petit Caporal” or in English “Little Corporal” the name stuck to him. He then attacked the Austrians in Mantua. Austria sent troops there four times, and every time Napoleon crushed them. In 1797 he came within 80 miles of Vienna when Austria surrendered. Napoleon had won 14 pitched battles and 70 combats. He had made the rich lands he conquered feed and pay the French soldiers. Plus millions of francs were send back to France. This helped France’s poor economy tremendously. Napoleon negotiated a treaty called Campo Formio with Austria. Austria gave up it’s Netherlands and Lombardy to France. Austria also recognized the Rhine as the eastern boundary of France. In return France gave Austria most of the old Venetian Republic.

When Napoleon returned to Paris he received a huge welcome. He then began thinking of pursuing political power and military power. He wanted to become the next Alexander the Great, so he asked the Directory if he could take a large army to Egypt. That way he could conquer an empire that included Egypt, India, and other middle and far east places. Napoleon came up with a neat idea to accomplish this. If he conquered Egypt, he could attack the English’s route to India.

He won the battle of the Pyramids in July 1798. But his fleet was destroyed at the Battle of the Nile in Aboukir Bay. So Napoleon decided to invade Syria. The English and Turkish troops in Syria had held up against Napoleon. Napoleon then retreated to Egypt. Then later in July 1799, he defeated 10,000 Turks at Aoukir. He returned to France shortly after.

Napoleon returned to find the Directory was a mess. He, in his selfish way, saw this as the perfect time for self-advancement. So in November of 1799 he overthrew the Directory. Napoleon set up a government called the Consulate. He was the first of three consuls. About three years later he made himself first consul for life. Everyone in France loved Napoleon at that time. Then he started increasing his power Napoleon’s impact is still around today. Many laws are based on the Napoleonic Code. In Paris there are many monuments saluting him. His remains were brought to Paris in 1840 and placed in the Invalides, where they still lie. 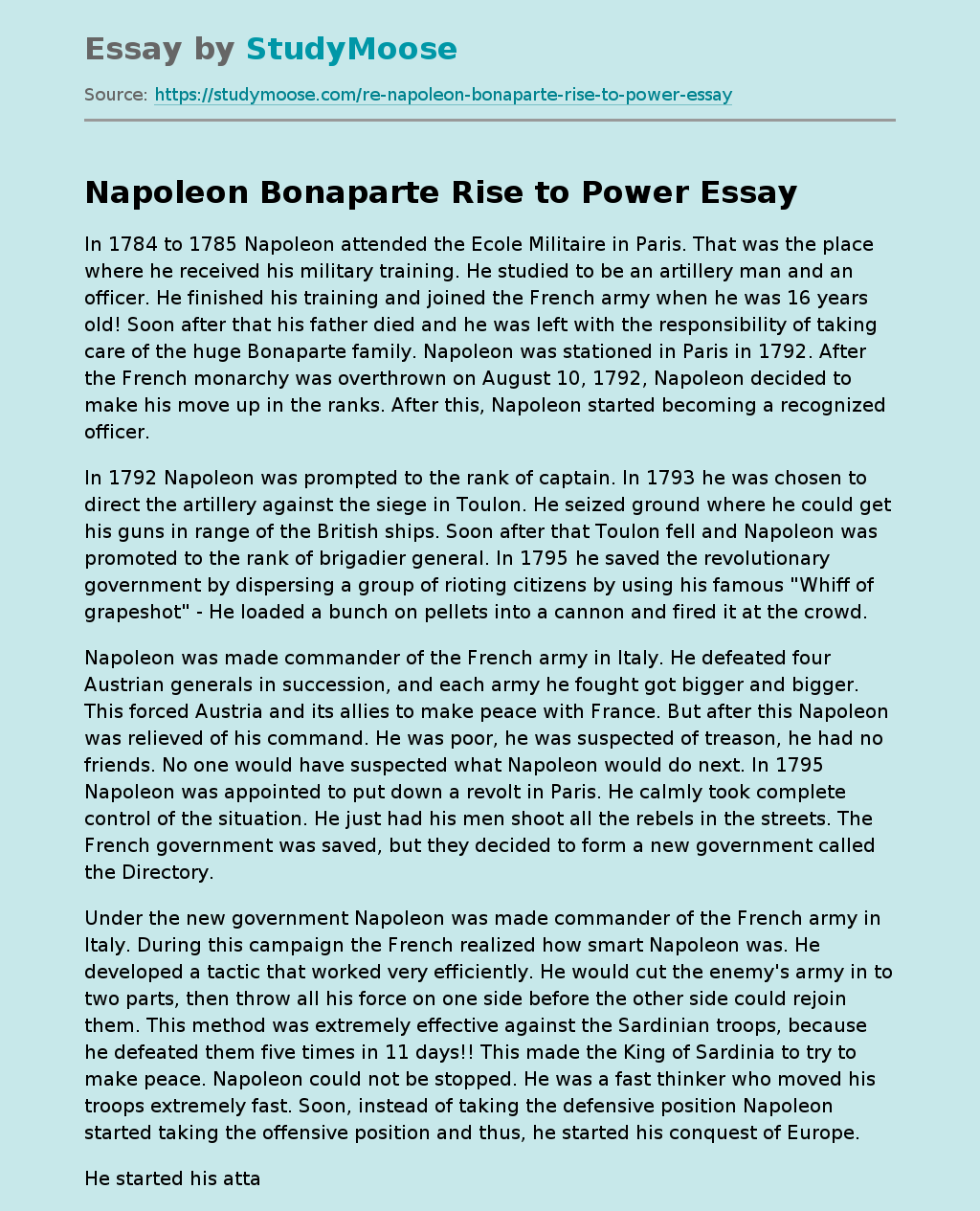