Seizing land over land and conquering the area for centuries, the Roman Empire and the Ottoman Empire were home for a mass number of individuals. Roman Empire, which was established by Augustus, was controlled from 27 B.C. to 476 A.D., while the Ottoman Empire, which was conquered by Osman I, was dominated from 1299 A.D. to 1923 A.D. Living in a separate era in a different location with distinct cultures and customs, these two empires do show differences but also some similarities.

Don't use plagiarized sources. Get your custom essay on
“ Analysis of Roman Empire and the Ottoman Empire ”
Get custom paper
NEW! smart matching with writer

With both empires flourishing from commerce and tolerating many cultures and religions in their early stages, it led to significant developments in art, architecture, and literature, but also some major social changes, such as adopting a new religion, changing the role of women, and spreading the use of slaves, during the peak of their power; however, the resistance to adjust to other social changes eventually caused the decline in both empires. The Early Roman Empire was a period of prosperity with internal peace that led to high levels of trade.

Merchants from different empires came to ports of Puteoli, Italy for commerce, including China that traded silk goods and Egypt that exchanged large quantities of grains, and most luxurious products poured into the wealthy upper class (D’Arms).

Additionally, during the Early Roman Empire, the official state religion centered on worshipping various gods and goddesses, involving Mars, Jupiter, Juno, Venus, etc. In contrast, the Early Ottoman Empire was highly influenced by the languages and customs of Islamic societies. This prompted people, including the Jews and Byzantine Greeks, to be interdependent, but only to a certain amount, on the millet system, which allowed individuals to rule under their own law. Similar to the Roman Empire, the Ottoman Empire also expanded trade routes from Europe to all the way to Asia. Moreover, before the rise of the Ottoman Empire, Turks also practiced shamanism, which is believed to be the interaction with the spiritual world.

Commerce and cultural growth soon led to the expansion of new intellectual achievements.The rise of the Roman Empire and the Ottoman Empire has led to immense development in art and architecture and literature. Romans have established an interest in statues after adopting numerous features of the Greek style of art. Statues were not only placed in public buildings but also at their private houses. While the Greek sculptors aspired for idealistic appearance in their figures, the Roman sculptors carved realistic statues, in which they would include unpleasant details and complexes (Vermeule). The Romans have also excelled in constructing buildings; they were the first people that used concrete on a massive scale to construct towering buildings. Their exceptional engineering skills have also contributed to the construction of roads, bridges, and aqueducts (Vermeule). The Ottomans Turks, on the other hand, were influenced by the Seljuk architectural traditions; they were able to develop large public buildings, such as mosque and caravanserais.

Moreover, Ottoman style of arts, consisting of Arabic calligraphy and carpet weaving, was symbolic and significant to the empire (Wendy). The height of literature was reached in the Age of Augustus in the Roman Empire. The most distinguished poets were Virgil, who is known for writing Aeneid, and Horace, who wrote Satires. Livy was a historian who was famous for writing prose during the golden age, and History of Rome was one of his masterpieces. However, his works were considered invaluable to historians since he emphasized less on factual accuracy and pivoted more on writing good tales. For the Ottoman Empire, the two primary written literatures were poetry and prose (Ünver-Lischewski). Through the influence of the Persian traditions, the Ottomans produced poetry, such as Divan poetry. Divan poetry was highly sophisticated and ritualized, and it included constant juxtaposition (Tharaud). The prose was not as prevalent as Divan poetry, but it was still developed and improved during the time period.

The first novel that was published in the Ottoman Empire was Akabi Hikayesi or also known as The Story of Akabi, a Turkish version of Romeo and Juliet, by an Armenian writer Vartan Pasha (Ünver-Lischewski). The thrive of art and literature reveal that the individuals in the empires were becoming more cultural and were finding their own distinguishable identity.Roles of women and slavery were social issues that were accentuated during the apex of power during the Roman Empire and the Ottoman Empire. During the rise of the Roman Empire, there was a dominant male in all Roman families. Roman males believed that it was because of women’s flaws that induced them to control them, and they assumed that they could make all decisions, including selling their children or putting them to death. However, by the second century A.D., the absolute authority of Roman men over women vanished; women had more rights and no longer needed guardians. Especially for upper-class Roman women, they could own, inherit, and sell properties, and they could also attend theaters and events without a male accompany (Morley). Women in the Early Ottoman Empire were also seemed to be inferior of their husbands.

However, the system changed, promoting women to have different rights based on their religion and class status. Women were authorized to sell and inherit properties, participate in the legal system, and leave their houses for regular events (Brummett). Sultanate of Women was a group of upper-class Ottoman women that had political power and were engaged in politics (Brummett). Roles of women in both the Roman and Ottoman Empire changed as the civilization became more advanced and innovative. Roman Empire was “made up of a rigid hierarchy of orders or ‘estates’ with legal distinctions of status between them” (Weaver). Due to the fact that slaves were at the bottom of the social pyramid, they were used as household workers or farmers or to build roads and public properties. The conditions in which the slaves worked were dreadful and heartbreaking; they were mistreated and misused, and some were even slaughtered by their masters. This led to the most famous slave revolt, which was led by the gladiator Spartacus in 73 B.C. Nevertheless, the revolt ended up with Spartacus being murdered and his followers crucified (Weaver).

Slavery was also a constituent of the Ottoman Empire; however, it seemed to be quite different from the Roman Empire. Most slaves were employed as domestic servants, and Muslims could not own slaves unless they were prisoners of the war. Furthermore, under Islamic laws, slaves were guaranteed the rights for medical care, shelter, food, and clothing; they were different from the chattel system since slaves were not considered as “personal property” (Aksan). Slavery was prominent in both empires; nonetheless, the treatment and the conditions were dissimilar. Religion was an important factor during the Roman and Ottoman Empire. Christianity began to spread during the Roman Empire. Initially, the Romans viewed Christianity as harmful to the Roman state since most Christians refused to worship the state gods and emperors (Schorn-Schutte). Nonetheless, people became more tolerant with the religion and more individuals were attracted to Christianity. The main causes that led to a greater number of followers were:

Islam was the official religion of the Ottoman Empire. During the peak of the Ottoman Empire, Sunni had great influence over both government and economy. Nevertheless, as time passed, reforms pushed Islam out of influential positions and diminished its power in government. Christianity and Judaism were present in the Ottoman Empire but due to the dhimmi system, which protected non-Muslims that live in Islamic states but gave limited freedom, a myriad of Christians and Jews converted in order to be protected and be secure in the society. The two religions—Christianity and Islam—in the two different periods of empires were well-established and have attracted abundant of people, affecting them in many facets.The development of the Roman and the Ottoman Empire and several other reasons eventually led to the fall of their supremacy, significantly impacting the people socially. During the decline of the Roman Empire, there was a noticeable reduction in trade and factories, which affected people’s occupations. There were also some premises that were known to be the causes of the fall:

All of these socially influenced the Romans, in terms of occupations and cultural values. Similar to the Roman Empire, there were innumerable causes to the decline of the Ottoman Empire; however, one main factor was the lack of receptivity. Bernard Lewis, the author of “Some Reflections on the Decline of the Ottoman Empire,” described the empire as: The Ottoman Empire has remained or reverted to a mediaeval state, with a mediaeval mentality and a mediaeval economy—but with the added burden of a bureaucracy and a standing army which no medieval state had ever had. In a world of rapidly modernizing states it had little chance of survival.The civilization was profoundly convinced of its superiority that it did not implement new practices. This was a huge problem because new technologies and intellectual awakening have arisen in the West, but the Ottomans did not encounter modernity and industrialism. This socially affected Ottoman Turks since they found difficulties adapting and responding to challenges from other nations after the decline of the empire (Lewis).

Although the Roman Empire and the Ottoman Empire eventually led to the decline due to several social causes, the developments and achievements since the rise of empires have led them to be unique and distinctive. The establishment of remarkable artworks, the construction of colossal monuments, and the creation of different types of literature have prompted both the Roman and the Ottoman Empires to be cultural and diverse. Despite the proliferation of slaves during the realm, the “unification” of multiple religions at the early empires to a single religion and the independence of women have created a sense of unity and self-sufficiency. The attainments and the implementation of changes during these periods have ultimately contributed to a better society we are living in today.

Analysis of Roman Empire and the Ottoman Empire. (2020, Sep 12). Retrieved from https://studymoose.com/analysis-of-roman-empire-and-the-ottoman-empire-essay 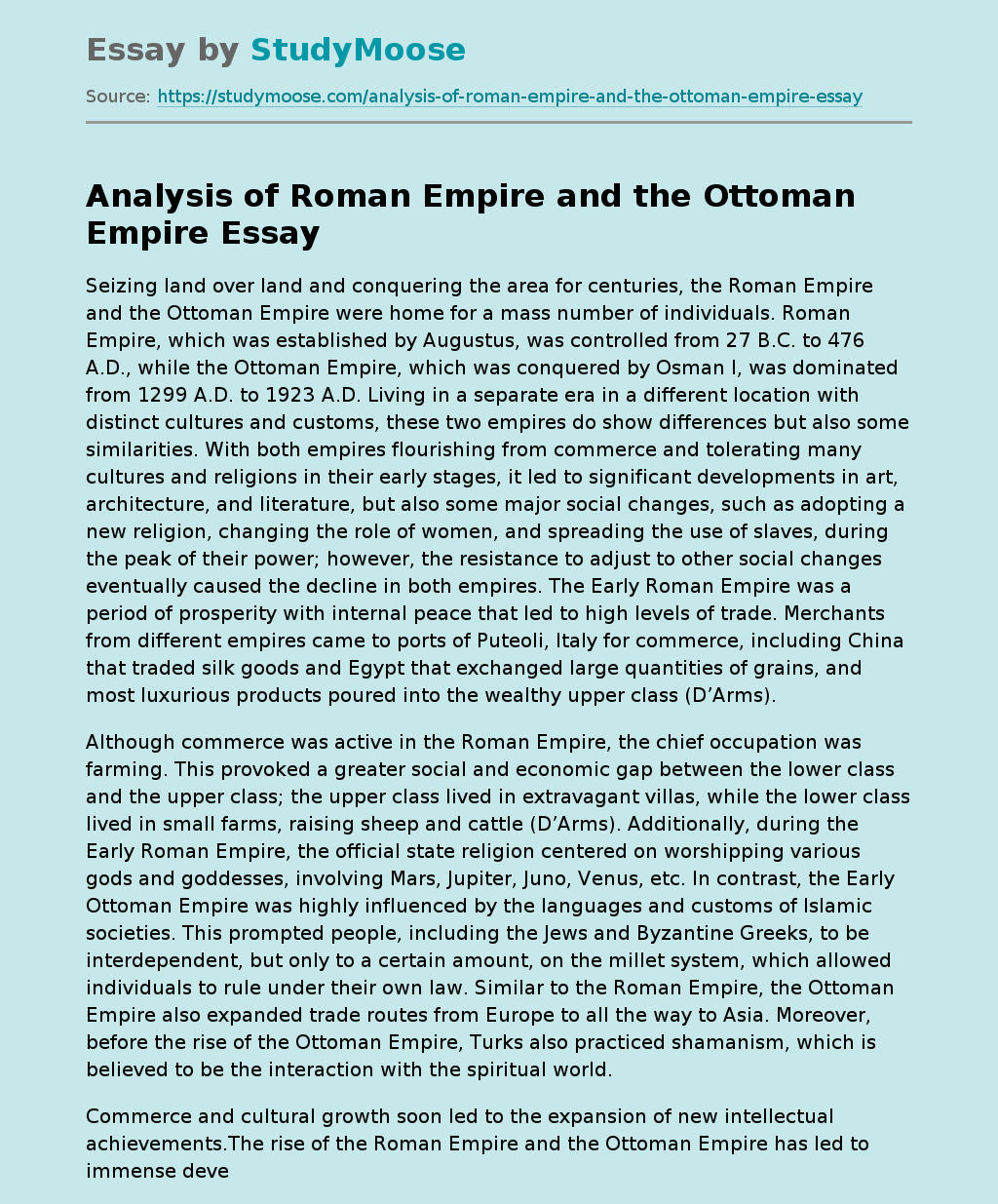