The Fall of the Roman Empire

The great Roman Empire expanded across all of Europe and into the Middle East. Its military was one of the finest. With major trading in Africa and Britain, the economy flourished with brining many citizens a healthy income. With amazing advancements in culture and technology, Roman society was at its finest. During the Pax Romana, the Romans had 200 years of peace and good ruling by level headed dictators and emperors. Despite Rome’s greatness in all of these areas, Rome would eventually fall.

Don't use plagiarized sources. Get your custom essay on
“ The Fall of the Roman Empire ”
Get custom paper
NEW! smart matching with writer

Surprisingly all of these qualities that led up to a flourishing empire were the same ones that led to its demise.

As Germanic tribes invaded, the military weakened and the government became unstable. Along with increased political trouble, there was a decline in economic and social structure. The fall of Rome was due to its leaders ignoring the severity of Rome’s problems. The decline in Roman military happened for various reasons. The Roman empire had grown so immense in size that the army wasn’t large enough to protect it.

Rome needed a larger army and finding soldiers was a hardship. With that, the military decided to hire mercenaries to fill the gap.

With that “foreigners poured into this…void [lack of soldiers]. The Roman Army was composed entirely of Germans” (Document 5). The problem with the mercenaries is that they weren’t royal to the Empire; their loyalty was to the money. The original values the Roman army was based off of; loyalty, bravery and discipline were all fading.

With Germanic attacks on almost all of the Roman empire (Document 6), the government pressed down hard on the citizens. The costs of mercenaries, artillery, food and housing led to the “strangling taxation” (Document 4).

Rome’s massive army meant to protect the empire actually led to its downfall. Even though the decline in military played a big part in the fall of Rome, the depleting economy did its share as well. As the Roman Empire grew, the expansion brought in slaves. What this did was the small Roman farmers lost their jobs. As farmers lost their jobs, the patricians had the ability to take their land and create with it latifundia. As the “abundance of slaves led to the growth of latifudia” (Document 3) the great estates took over the agricultural industry.

As latifundia took over, more farmers became out of work and in the persuit of finding work they moved into the cities and “added to the unemployment there” (Document 3). But the expansion didn’t stop there. As “the overwhelming majority of the population had been systematically excluded from political responsibilities, they could not… protect themselves… serve in the army… Their economic plight was hopeless” (Document 1). As missionaries fled into the Roman Armies, the citizens were being forced to pay a huge amount of taxes.

But with no farmers to grow the food for the soldiers, who would? Expansion brought wealth into the empire, but “when the empire ceased to expand; however economic progress soon ceased” (Document 3). The inflation rate spiked, the rise in prices on everyday necessities decreased the value of money. The Romans were having to trade with exterior partners for items that could not be produced. The flow of money coming in could not match the amount of money going out. The values of the Romans depleted as their economy crumbled.

As the Romans economy faltered, so did their social well being. Without work to pay the citizens, they had to steal what they could not afford. The crime rate increased as citizens stole more and more supplies from vendors. As the economy was plundering, Romans watched “their cities slipping into the uninterrupted decline” (Document 1). Seeing their cities fall into the abyss, the moral of the citizens was crushed. As the spirit of the citizens was crashing, “the old Roman virtues of self-reliance and initiative were lost” (Document 4).

Very few of the “inhabitants of the empire believed that the old civilization was worth saving” (Document 1). The appreciation for the empire was decreasing rapidly. Roman values and social stability fell deeper into the great decline. The greatness of Rome and the leaders ignoring the severity of its problems eventually led to the fall of Rome. Too much of the prosperity was taken for granted. What use to be a powerful and expansive empire became prone to enemy attacks that crept into the capital.

The military became fault of a lack of respect and loyalty to Rome. Rome’s economy splintered under the stress of the expansion of the empire. The growth of latifundia led to the spiking unemployment rate. Finally the citizens of Rome became socially unstable under the pressure of the economic breakdown. The Romans lost respect for their empire. The spirit of the once jubilant citizens was crushed. All that Rome had been built up on eventually came back around to result in the gradual fall of Rome.

The Fall of the Roman Empire. (2016, Jul 04). Retrieved from https://studymoose.com/the-fall-of-the-roman-empire-2-essay 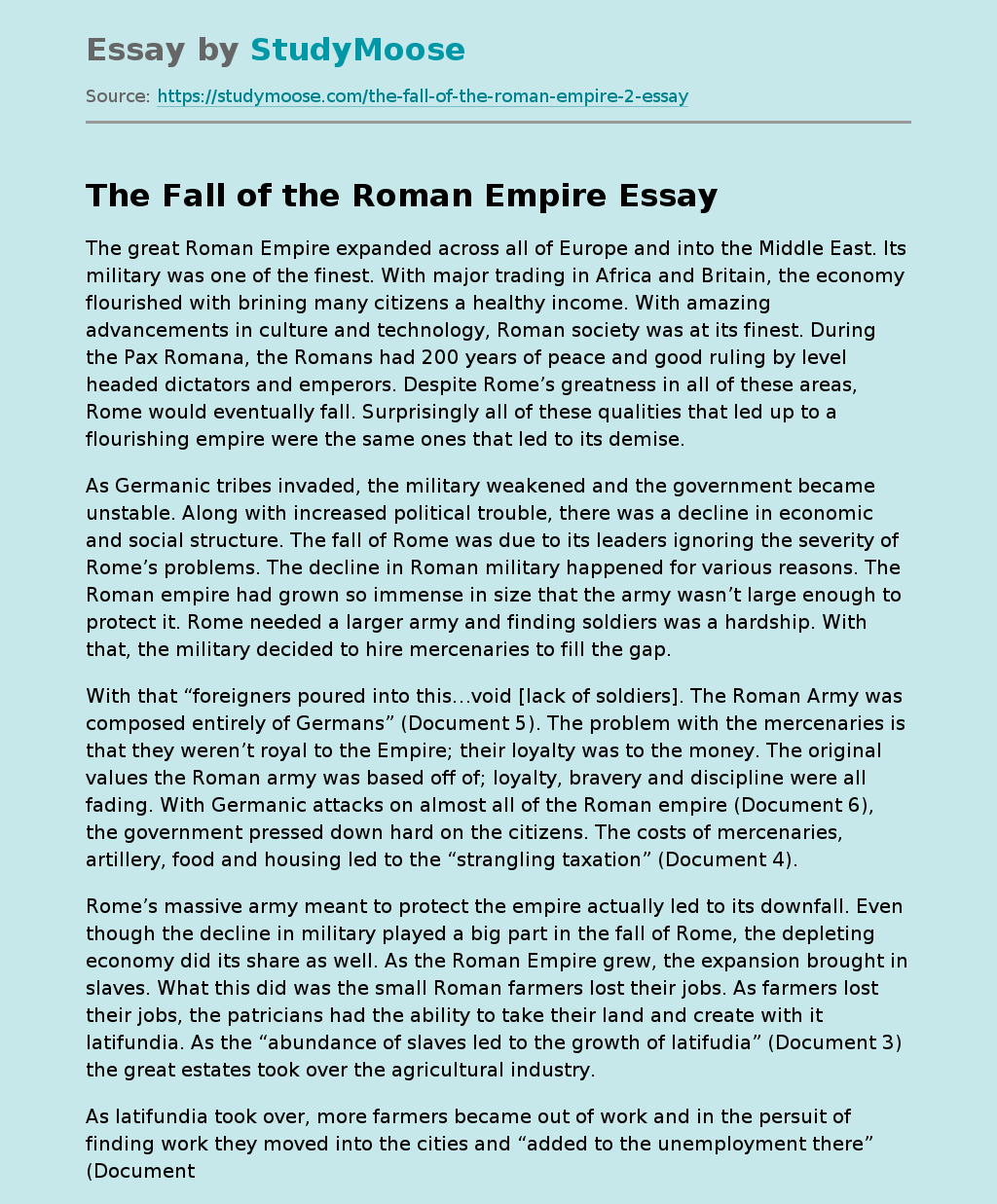