Plutarch Fall Of the Roman Republic

The Roman Republic began after the overthrow of the last king in 509 BCE. Rome thrived without their Kings as the Senate took control. The Republic expanded to cover all of Italy, Greece, parts of France and Africa, the Iberian Peninsula, and more. The powers and responsibilities of the former Roman monarchs were essentially divided between two consuls, an elected office with the power of veto over each other. Approaching the end of the Republic, Rome was already the major power of the region.

Don't use plagiarized sources. Get your custom essay on
“ Plutarch Fall Of the Roman Republic ”
Get custom paper
NEW! smart matching with writer

So how did the Republic fail and fall? Was it Julius Caesars fault? Pompey? Octavian? No, the Republic met its demise due to the greed, fear, and gross incompetence of the wealthy senators.

The mythical origins of Rome are tied to the fall of the city of Troy. Aeneas, born of the prince Anchises and the goddess Venus, a Trojan prince, escapes the devastation of Troy with his father, son, and a group of others. (Virgil) Among his descendants would be the twins Romulus and Remus.

Ordered to death as infants by the king and abandoned, the children would survive by nursing from a she-wolf until they were eventually found and adopted. As they grew older they decided to found their own city. A disagreement between them on where this first city should be started resulted in the death of Remus, and Romulus would go on to found the city of Rome and become its first king.

Roman history can be divided in to three distinct periods. The Roman Kingdom, the Roman Republic, and the Roman Empire.

While there are little in the way of writings from the time that survive, the origin kingdom is believed to date back to 753 BCE. Most of what is known from the time come from later Roman historians in the Republic era. During the time of the Roman Kingdom, as the name suggests, they had kings who ruled over the people. Unlike many kingdoms of the time however, the king was not considered to be a god, he was a “representative of the people.” (Mommsen, 15) The king’s job was enforcing the laws, and any deviation from those laws required the permission of an “assembly of the people and a council of elders.” (Mommsen, 15) It was this council of elders that was the original Senate, and the assembly of people were all those citizens who were not senators. The Senate was comprised of the heads of wealthy Roman families. Numbering 300 and appointed by the king these senators served for life. While the king possessed the power to appoint a senator, the Senate had the power to elect a new king when the old one died. They also had the power to accept or veto any legal changes or breaks from the constitution that their monarch may have suggested. Declaring war also required the senate’s permission. In a very real way, they were the “guardians of the constitution” (Mommsen, 19), a responsibility that they would still hold dear hundreds of years in to the future.

Tarquin, the last king of the Roman Kingdom, was overthrown, in large part for ignoring the Senate, and the tradition of consulting them before taking any actions that violated the laws. The event that precipitated the revolution however, was the rape of Lucretia, the wife of a Roman nobleman by Tarquin’s son Sextus. Lucius Junius Brutus, rallied the people against Tarquin and convinced them to remove the king’s right to rule. After a violent revolution Tarquin and his family were exiled. Tarquin made several unsuccessful attempts to retake the throne, and the last king of Rome died in 495BCE. Ever after Romans and especially the senate, would cringe at the word king, and vowed that there would never be another. And so, the Republic was born.

With the monarchy now gone, the king’s powers were divided between two elected consuls. Rather than a life long ruler, these consuls had terms of office. “Chosen from the patrician class, or ruling families” (Abbott, 9), they served for the period of one year. They had veto power over one another to keep each other in check. Unlike the former kings, the consuls could be prosecuted for crimes after their term of office had passed, so they were incentivized to adhere to the laws and traditions of Rome. The consuls, after their term of office, were then admitted to the Senate for life.

In the early days of the Republic, the office of dictator was created in response to armed aggression from the Sabines. This office granted its holder near complete authority to deal with the problem for which he was elected. After the issue was solved the dictator would then lay down this vast power. Towards the latter part of the Republic, this office would serve as a catalyst for its end. Lucius Cornelius Sulla Felix would revive this office in 82 BCE after over a century of it not having been used, and in 49 BCE it would be granted to Gaius Julius Caesar.

The Senate, comprised of the wealthiest of Romans, had set itself up as an oligarchy. Through middlemen they heavily taxed the people of Rome, resulting in many peasant tax revolts and creating a generally unfavorable attitude toward the Senate as well as the traditional way of doing things. Around 130 BCE, Tiberius Gracchus, a plebian tribune, sought to redistribute some of Rome’s wealth from the patrician class to the poor. This made him an enemy of the rich landowning senators, and they ordered his execution. Tiberius, and 300 of his supporters, were beaten to death by a mob led by the Senate. Ten years later, his brother Gaius would continue his fight. He would face a similar fate as his brother, though at his own hand. According to Plutarch, one of the reasons things ended so poorly for the Gracchi was their age difference of nine years. Had they both risen to political power at the same time, maybe things might have been different.

Marcus Livius Drusus, tribune of the plebs, who had proposed a law that would have granted Italian allies Roman citizenship along with many other bills that were decidedly pro-people, quickly became an enemy of the wealthy Senate who would do whatever they could to hold on to their power, money, and land. With his assassination in 91 BCE the Social War would begin. Italian allies revolted against Rome in protest of their minor land holdings despite making up a large portion of the Roman military. It was during this time that Sulla would take the dictatorship in order to put down this rebellion and safeguard the senatorial oligarchy by limiting the powers of the tribunes, and by extension the people. He had those who opposed him killed and took their land and wealth. An estimated 9000 people were killed, and wealth or status did not earn any exceptions from Sulla. One of these people who was forced to flee for his life was Gaius Julius Caesar. His mission accomplished, Sulla would lay down the power of dictator granted to him by a fearful greedy Senate intent on maintain its domination. This would, however, set a precedent going forward in the Republic. It would let other ambitious men know that obtaining the office of dictator was possible, and one would achieve it.

Gaius Julius Caesar claimed descent from Aeneas and through him the goddess Venus herself. He rose to political fame and power through multiple military victories which broadened the borders of the empire. He stood for the people against the Senate sharing many of the views of the Gracchi brothers and Drusus who had come before him. As Consul, Caesar proposed a law that would redistribute public land to the people. Supported by Marcus Licinius Crassus and Gnaeus Pompeius Magnus, or Pompey, they together became known as the Triumvirate, a powerful political force in direct opposition to the oligarchy. The trio would not last long together however. With Caesar away on a military campaign, Crassus is killed in battle, and Pompeys wife, Caesars daughter dies. Pompey remarries into the family of Caesars enemies, and so ends the Triumvirate. Caesar is then ordered back to Rome by the senate as his governship had expired. He believed that without the legal protections offered to him by his office, he would now be prosecuted and declined. Pompey accused Caesar of treason. Caesar’s response was to cross the Rubicon river with a legion of his men. A response that would bring civil war and the final days of the republic.

As Caesar’s single legion entered Rome, Pompey and the Senate fled. Caesar was declared dictator, but layed the power down after being elected as consul for the second time. Pompey was later killed by Egyptions as he hid from Caeser. In 48 BCE Caesar was again appointed dictator, this time for the term of one year. He then left for Africa to take care of the senator’s who had fled with Pompey and opposed him. It is after this victory that Cato commits suicide. And following that, Caesar is appointed dictator for the period of ten years and goes on to hold two more consulships.

Plutarch Fall Of the Roman Republic. (2021, Apr 20). Retrieved from https://studymoose.com/plutarch-fall-of-the-roman-republic-essay 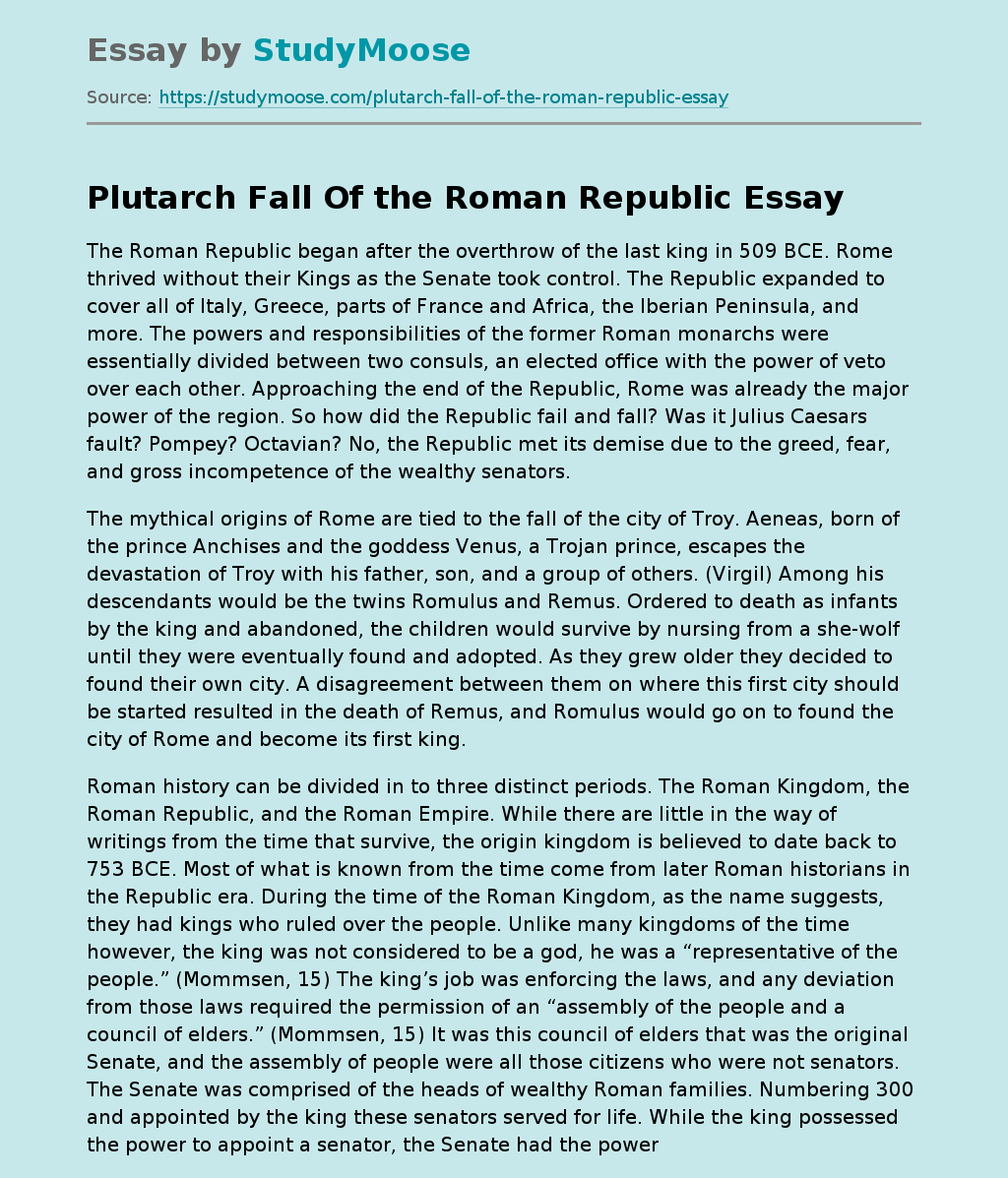