In Plutarch’s Lives, Plutarch sets out to parallel lives of historically important people from Greek and Roman history. The common theme is comparing a Greek figure with a Roman one. However, because some of the people written about are living during the same time as each other, it is also possible to compare how Plutarch presents them. This is true of Greek figures Themistocles and Aristides, who were paired off with Roman figures Camillus and Cato the elder respectively. They were rivals in Athenian politics and Plutarch actually compares them directly in their biographies.

Don't use plagiarized sources. Get your custom essay on
“ Compare and Contrast the Presentation of Themistocles and Aristides in Plutarch’s Lives ”
Get custom paper
NEW! smart matching with writer

These comparisons are not uncommon in Plutarch.

There are certain aspects to how they are presented by Plutarch which need some analysis. The first thing that is noticeable is the different presentation of Themistocles from his own biography to that of Aristides. In Themistocles, he is portrayed as a young man lacking direction, who is roused by the great Greek victory over the Persians at Marathon.

”….though he was still a young man when the battle at Marathon was fought and the generalship of Miltades was in everybody’s mouth, he was seen thereafter to be wrapped in his own thoughts for the most parts, and was sleepless o’ nights, and refused invitations to his customary drinking parties” [3.3]. This is in sharp contrast to Plutarch’s portrayal of him in Aristides. In this biography Plutarch shows that Aristides and Themistocles had a long engaging political rivalry which preceded the battle of Marathon. “However, since Themistocles was a reckless agitator, and opposed and thwarted him in every measure of state, Aristides himself was almost compelled- partly in self-defence, and partly to curtail his adversary’s power, which was increasing through the favour of the many- to set himself in opposition to what Themistocles was trying to do” [3.

This is an example of how, in some cases, Plutarch uses a technique which third century biographers and historians also used. This was that the biographer ascribes to the historical figure, the personal characteristics which sum up the people in general. So in this case Aristides was given personally the spirit of all the Athenian people at the time of Marathon. “The other is the attribution of public or communal action to the hero’s own initiative: Aristides at Marathon”. A possible reason for this is that Plutarch is not necessarily aiming to write historically accurately, but is more concerned with the character of the figures he is writing about. “The tradition of Marathon as established by Herodotus is altered and enlarged with apocryphal material to show the bravery, unselfishness, and perfect incorruptness of Aristides”.

This individual personification of a population can also sometimes be simply attributed to a lack of contemporary sources. While both Themistocles and Aristides use Herodotus and Thucydides as their main source, the list of authorities cited by Plutarch in Aristides is fifteen, while in Themistocles there are Twenty-eight. “Late personalization of general history, and apocryphal abound in this portion of the life, as was to be expected in the absence of authentic material”.

A strong theme running through Aristides is the virtuousness of his character. The name Aristides ‘The Just’ was created for him during the fifth century. This characteristic is in sharp contrast to Themistocles own characteristics, and was a major cause of the rivalry between them. Plutarch contented that it was this “dissimilarity of their lives and manners”, which was the reason for the rivalry. The ostracism of Aristides, according to Plutarch was not because of his opposition of the naval policy of Themistocles, but rather the jealousy of the Athenian people of his superior ‘justice’. “It befell Aristides to be loved because of his surname, but afterwards to be jealously hated” [7.1]. Clearly this was not the case and it shows how Plutarch could fail to see the clear political problems which caused certain situations to occur and instead placed more importance on the characteristics of individuals.

The implication of the comparison made by Plutarch here would at first put Themistocles in a poorer light to Aristides. “Aristides is described as ‘not engaging in politics to please or for his own glory; Themistocles by contrast is presented with the typical features of a demagogue. He was ‘inciting the people to many radical decisions’ and ‘imposing great novelties'”.

This gives us an example of how Themistocles is portrayed by Plutarch in his biography. The qualities he attributes to his triumphs were wisdom and cleverness. It was these natural qualities which allowed him to achieve great personal victories. “Plutarch, in the life itself, attributes two natural traits of character to Themistocles, synesis (2.1) and philotimia (18.1). These are the only intellectual and moral qualities listed as component parts of his physis”. He inspired the Athenians to defy the Persian King, united all southern Greeks by yielding to claims from Sparta, was foremost in convincing the Athenians to abandon Athens in favour of the fleet, and was instrumental in the naval successes of the wars against Persia. However after the Persian wars, some characteristics of Themistocles were to become problematic for Athens. He fell out of favour with the Spartans, which occurred because of his cleverness in his diplomatic dealings with them. Plutarch deals with both aspects of his character. “Plutarch will show him both good and bad: a saviour in wartime, but arrogant and divisive in peacetime” Plutarch viewed the fact that Themistocles’ was instrumental in getting Aristides ostracised as proof that he was not always looking out for the best interests of the city, but rather was driven by the competitive desire for success and glory.

One last aspect of Plutarch’s presentation of Aristides and Themistocles regards how they are paralleled with their Roman counterparts in the book. Aristides and Themistocles are morally comparable to Cato and Camillus, however not necessarily as statesmen in the eyes of history. This could be a reason for the embellished telling of the lives of both these men. Plutarch wanted to elevate them to a stronger historical importance, which is especially true in the case of Aristides. Not only was the role of both these men in Marathon raised, but there are other examples of this later in both biographies. Aristides is given a leading role in the battle of Platea, which was not really accurate and Plutarch hints that without him, the campaign would have been a disaster.

This again shows Plutarch’s motives in his book. It is the character of the man which is of most importance to him and not the historical accuracy of the content. Themistocles and Aristides are sometimes presented in ways that would seem contradictory to each other’s lives. However Plutarch is cleverly using the source material from different periods to emphasise the personality traits of the man. If it suited him to embellish ones role in a historical event to create the image of the man he thought was actually there, then he had no problem in using whichever source gave him the licence to do this. This was the essence of Plutarch’s Lives.

Compare and Contrast the Presentation of Themistocles and Aristides in Plutarch's Lives. (2021, Oct 11). Retrieved from http://studymoose.com/compare-and-contrast-the-presentation-of-themistocles-and-aristides-in-plutarch-s-lives-essay 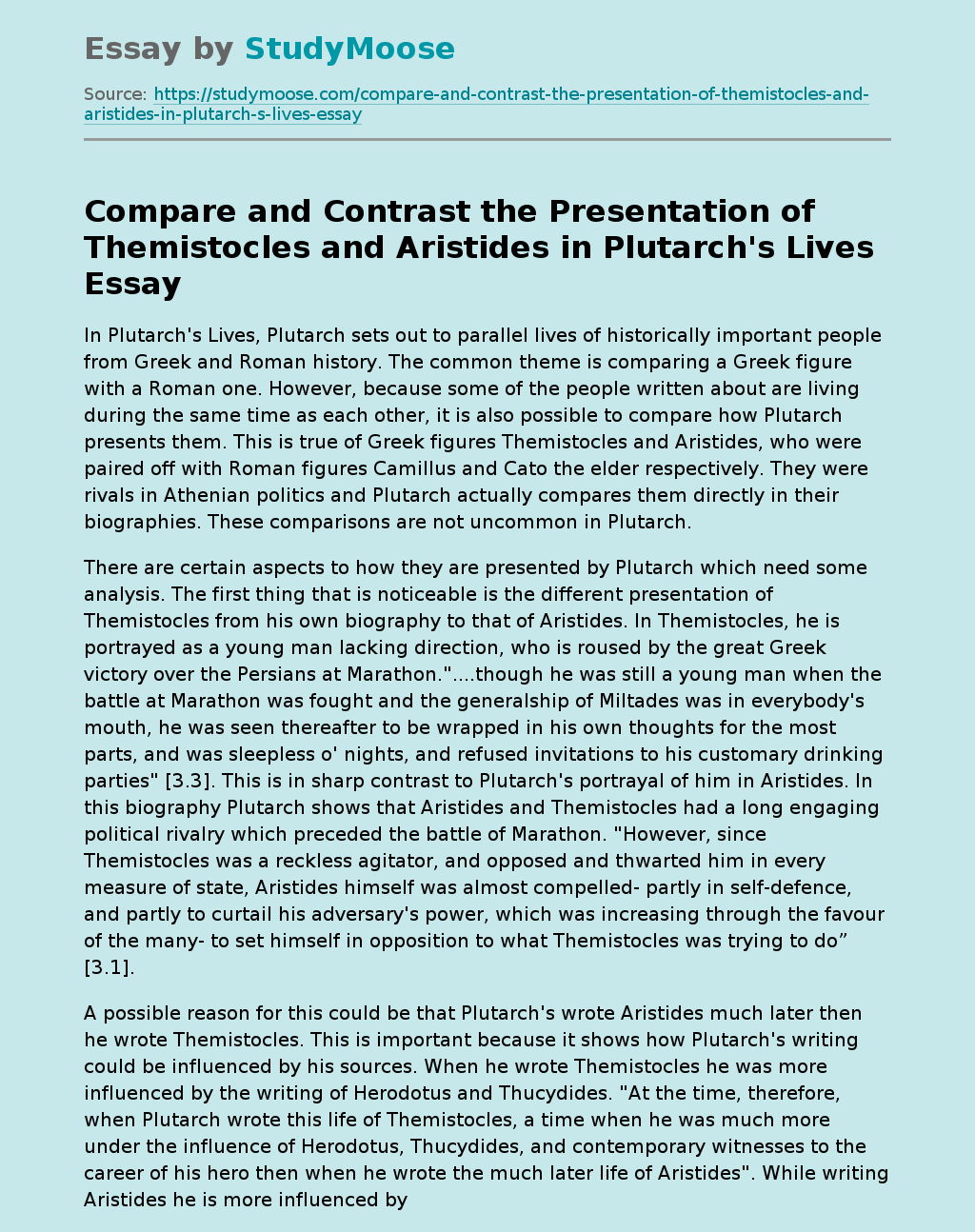