Compare and contrast the lives of Ramatoulaye and Aissatou up to the end of Chapter 16, paying particular attention to their friendship, shared idealism and marriages.

The narrator of ‘So Long a Letter’ is Ramatoulaye, who is writing to her friend Aissatou. Both women’s lives are strikingly similar, or as Ramatoulaye says they ‘developed in parallel.’1 Ramatoulaye and Aissatou were friends from the time they were children. They both were well educated and both got married. Both their husbands remarried, which caused both pain and unhappiness.

Don't use plagiarized sources. Get your custom essay on
“ Compare and contrast the lives of Ramatoulaye and Aissatou up to the end of Chapter 16 ”
Get custom paper
NEW! smart matching with writer

At this point their lives diverge, in the way they deal with their unfaithful husbands and how they change the courses of their lives.

’3 Their friendship and common idealism acts like a thread that ties and unites Ramatoulaye and Aissatou together. Throughout chapters one to sixteen, the intimacy between them is evident. After they got married they would meet on the beach and ‘depression and sadness would disappear, suddenly to be replaced by feelings of plentitude and expansiveness.’4

There were harbingers that suggested that both Aissatou’s and Ramatoulaye’s marriages would fail. Ramatoulaye’s mother didn’t want her to marry Modou; she felt he was ‘too handsome, too polished and too perfect’5 a man.

In Aissatou’s case, Mawdo’s mother didn’t want a ‘Toucouleur to marry a goldsmith’s daughter.’ 6 In spite of these adversities, both marriages were initially successful. Mawdo ignored his mother and claimed that ‘marriage was a personal thing.’7 He loved Aissatou. Similarly, Ramatoulaye was initially infatuated with Modou. As she reminisces, ‘But above all, you knew how to be tender. You could fathom every thought, every desire. You knew many undefinable things, which glorified you and sealed our relationship.’8 Both couples quickly had children and both Modou and Mawdo did well career wise.

Up until this point, both Ramatoulaye and Aissatou lives are extremely similar. Then both their marriages break up, but for different reasons. Mawdo’s mother cannot accept that her son has married a goldsmith’s daughter. She felt that this inter-caste marriage was an insult to her family and she came up with a devious plan to break up her son’s marriage and to get Mawdo to take a second wife. Mawdo’s mother, Seynabou went to her village to meet her relatives. Her brother, Farba Diouf, was a customary chief and he gave her one of his daughters, Nabou to educate. Seynabou took care of Nabou’s education and trained her as a mid-wife. Seynabou then approached Mawdo, ‘I will never get over it if you don’t take her as your wife. Shame kills faster than disease.’9 Mawdo faced immense pressure from his mother and married Nabou. Aissatou was distraught and left him ‘stripping herself of his love and his name.’10 Aissatou seeked solace in books and became an interpreter in the Senegalese embassy in the United States.

Ramatoulaye and Modou’s daughter Daba had a close friend, Binetou who often came home. One day, Binetou informed Daba and Ramatoulaye that she wanted to get married to her ‘sugar daddy,’11 a man who showered expensive gifts on her. On the morning of the marriage, Ramatoulaye was crudely told by the Imam and by Modou’s brothers that the ‘sugar daddy’ was her husband. She then watched her husband take a second wife. Ramatoulaye was devastated by her husband’s remarriage. ‘She cried everyday.’12 Unlike, Mawdo who still cared for Aissatou, Modou never returned to his house and completely forgot about his wife and children. Ramatoulaye ignored the advice of her children who advised her to divorce Modou. Gradually Ramatoulaye picked up the shattered pieces of her life. She learnt how to ‘go to cinemas alone’13 and how to carry out the household duties that had previously been done by Modou.

Although, the nature and reasons behind both Modou and Mawdo’s decisions to remarry are different, a common theme emerges. They have both been betrayed by their husbands. In the first sixteen chapters of the book, we observe the feminist message that Ba is intending to convey. The women are portrayed as the oppressed and the men as the oppressors. All the women we are introduced to in the first sixteen chapters (with the possible exception of Mawdo’s mother) are good. Even Binetou is described as beautiful, lively, kindhearted and intelligent.’14 It appears that the women in the book, chiefly Aissatou and Ramatoulaye symbolize the typical oppressed Senegalese women. By paying close attention to Ramatoulaye and Aissatou’s close friendship, Ba is trying to convey that women need to stand up for other. It is for these reasons that Ba is believed to be a radical feminist and addresses the book to all women but only to men of good will.

To conclude, Ramatoulaye and Aissatou’s lives start similarly but end differently. While the story is narrated by Ramatoulaye, we get to know Aissatou’s viewpoint due to the intimacy between the women and the fact that Ramatoulaye recounts what Aissatou has confided in her. Both women grow up together, become teachers and get married to men of roughly the same economic strata. Then, differences emerge. Aissatou turns over a new page and starts her life afresh. She is missed by her husband and she finds financial success. On the other hand, Ramatoulaye can’t find the will to divorce her husband so picks up the pieces of her shattered life and tries to get her life as close to ‘normal’ as possible. Rather than mock or condemn Ramatoulaye’s inability to divorce her husband, Ba empathizes with her by recognizing the complexity of the issue. As Ramatoulaye says, ‘leave? Start again at zero, after living twenty-five years with one man, after having borne twelve children? Did I have enough energy to bear alone the weight of this responsibility, which was both moral and material?’15 It is blatant that such a task would be extremely difficult. At the end chapter sixteen, Aissatou is in a better position though indicating that independence and divorce was the preferred option.

Compare and contrast the lives of Ramatoulaye and Aissatou up to the end of Chapter 16. (2020, Jun 01). Retrieved from https://studymoose.com/compare-contrast-lives-ramatoulaye-aissatou-end-chapter-16-new-essay 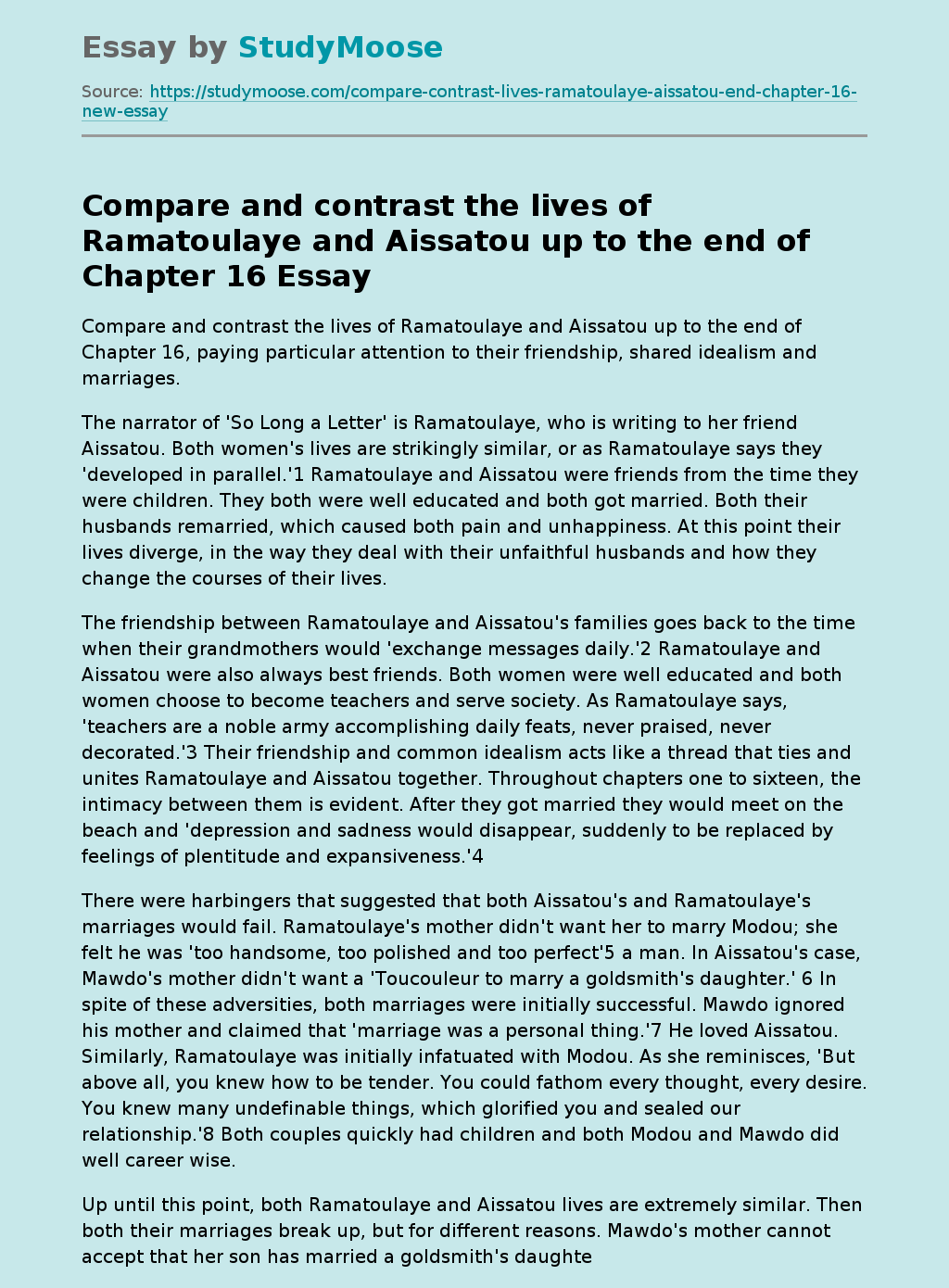