Grandmother Selina grew up in age where everything was made by hand. She went to school where teachers mostly used chalks and wooden boards. However, today, teachers no longer use chock boards, instead they use smart boards or overhead projector. Selina used to carry a dictionary for school every day for her English class. However, today, there are fewer students carrying dictionaries because they have an access to an Internet; which helps to find the meaning of a word in less than a minute.

Don't use plagiarized sources. Get your custom essay on
“ Benefits of technology ”
Get custom paper
NEW! smart matching with writer

According to Burnstein, “U.S. technology and business innovators recognize that robots in factories have potential to save and create more jobs than they eliminate”.

People will now have to learn how to use machineries and robotics to work in companies that needs specialist on certain machineries. For example, people might get a job as a computer technician or machine operator. Also, many robotics and machineries related companies will have to hire people that design, build, and program the equipment.

Nowadays, technology is fast paced and it is becoming more advanced day by day. Today, the majority of people that work in a company with large information technology divisions need a computer to get their work done. According to Jerome, there has been a new technology invention of distant servers that can easily replace the computer hard drives. However, “the cloud is already putting Americans to work. Google’s team has more than 1,000 employees, Texas cloud company RackSpace eploys 3,700 people, and California-based provider Saleforces.com has 235 open positions, according to The Wall Street Journal”(Jerome). Technology has made our jobs so much easier. As a society in a whole, we need to take an advantage of what technology is providing us. For example, farmers’ physical labors have disappeared because now they use machines to do the work. According to Nye, “As recently as 150 years ago, most people in Europe and the United States were farmers. Today, less than 5 percent remain on farms, and industrial work occupies only about 25 percent of workers” (Nye, 7).

Because of this, many people argue that technology has impacted the job creation negatively. It has not just made our lives easier, but it also has helped people to save time and to find a better job. Few decades ago, construction workers used to work with tool such as hammers, ladder, and ropes. However, today, people use machineries such as nail gun, paint sprayer, and cranes. As Nye mentioned, “Tedious and dangerous factory work has been replaced by robot or automatic machines, while millions of people hold jobs that did not exist 150 years ago in the industries created around new technologies, such as computing, musical recording, broadcasting, design, advertising, and research and development” (7).Technology is advancing so rapidly that we might stay behind if we don’t adapt to it. Because of this, people need to improve their technological skills. The more we familiarize with technology, the more opportunity we will have finding a job. As technology has increased in our lives, we have been able to characterize the importance of technology in our social life.

Technology has made our lives so much easier. For example, we don’t have to go to a bank to deposit checks because people can do this by simply uploading a check in their bank’s mobile application. Also, technology has provided us with Global Positioning Satellite (GPS) system to travel without getting lost or asking for help; even cars are being made with GPS systems which helps drivers to comfortably drive wherever they want to. There have been many pros and cons about social media. In addition, some people say it has affected the way we communicate negatively by diminishing our social skills. However, the benefits of technology in our social life have overthrown the disadvantages that technology supposedly causes. Today, most of the people are using social media such as twitter, Facebook, Skype etc… The popularity of Facebook and twitter has increased tremendously during the past few years; it has been a great tool to keep in touch with your friends and family.

According to the psychiatrist Marley, “People who follow a lot of Twitters from diverse backgrounds could quickly build up an understanding of lots of people, and this in turn would enable them with ‘people knowledge’ that would better equip them for social interactions with people”(Marley). There are thousands of twitter users that are from different country, who speaks another language, and who shares different customs than others. Even though people are not interacting face to face with others, people can easily feel comfortable and get better understanding which can help communication. “In an age when all aspects of life are becoming increasingly electronic, social networking sites are turning into a social scene that caters young and adults, and provides for their interactive needs while connecting peers and colleagues worldwide” (Wittaker). Social networks can be a great way to look for support.

Most of the time, people find support on social network when they feel sad, lonely or bored. According to Torr: Several studies have specially countered some prior research linking Internet use with isolation or depression, showing experienced users may find a greater support online, become more satisfied with their interaction and communication, and generate new relationship through the ability to contact others more easily than they can offline (Torr, 26). Also, social media makes it easier to communicate for people who don’t feel comfortable talking in person. Today, technology has been used as new way of entertainment. The majority of teenagers carry a smartphone; some people see this as a bad thing because they only use it to play games. However, what people don’t realize is that it is becoming a game changer. The reason why cell phones are becoming a game changer is because “kids themselves are bringing the device to school, we adults brought laptops into school, and they are a yawn, as are netbooks because the kids see cell phones as their generation’s technology”(Soloway).

Today, kids are much more familiarized with technology than what we were as a kid. In addition, technology also has changed the way we entertain ourselves. For example, our parents experienced music very differently than today’s digital natives. Not so long ago, people used to buy cd’s to listen to music or take pictures in a roll of film that had to be taken to the pharmacy to be printed out. However, today people can easily take a picture, share songs, or music videos through social network sites such as Facebook, Twitter, and Instagram. Teenagers today, “expresses themselves creatively in ways that are very different from the ways their parents did at their age” (Palfrey, 6). Technology also has influenced the way people get important informations. For example, Internet provides us with great medical information such as how to cure a virus, fever or any kind of illnesses.

According to Haugen, “a survey made on March 2005, about 17 million said that Internet had played a crucial and important role in helping them with major illness or medical conations”. Sometime, people use the internet to find a recommendable doctor nearby. For all these reasons technology has positively impacted the way that people participate in a social life. Other than technology being beneficial in our social life, we have also seen how the technology has provided benefits in the field of education. The majority of school districts prohibit electronic devices in classroom because it distracts them from learning. What parents and teachers don’t realize is that mobile devices such as smartphones can help students to understand the material better. Parents, teachers, and administrators refuse to allow students to use smartphones in class because students spend their time on social networks.

However, “ ‘ significantly more students who use mobile devices in the class room express a stronger interest in subjects than students than students who do not use these devices in classroom’” (Armstrong, 39). Learning social skills through social network can be an important skill for students to thrive in the future as a professional. As Gerber mentioned, “Social networking sites offer teenagers the opportunity to navigate everyday technology, learn valuable computer and social skill, and polish their language efficiently” (Gerber).As students interact with their friends through social networking sites, they become friendlier. They have an opportunity to meet other people not only inside of school, but also outside of school.

Today’s generation are more literate, creative, and more socially skilled than their parent’s generation because of their early familiarity with the Internet. Social networking does not only improves student’s communication skills, but it also allows students to “share information and creative original work such as poetry and film” (Wittaker).College students have experienced the benefits of technology in many ways. For example, if students don’t know the meaning of any work, the first thing that they do is look it up online. This does not only give an understanding of a word, but it also gives time to look for a variety of information. Also, in many colleges, instructors provide students a website where they can submit their class works and check their current grades. Since everything is becoming electronic, we have noticed that people are no longer reading newspapers. The time when we see someone reading a newspaper, are usually elderly people.

Most of these elderly people think that digital natives are not learning effectively because they don’t read newspapers. However, this argument is completely wrong because technology allows students to access tons of information that they’re interested in. According Palfrey mentioned, “Digital natives pick up bits and pieces of news and information as they go about their day, not in a single sitting at the breakfast table or in the front of the television in the evening”. Since today’s students have an easy access to the internet, they just look up for any news that they feel interested in. Technology has not only made learning easy, but it also has trained students to improve technological skill for the future where everything is going to be electronic. Grandmother Selina would have been lucky if she was born in today’s age. She would not have had to carry heavy dictionary to her class. Technology has made our life less complicated by saving time and allowing more flexibility.

Technology has changed in a blink of an eye. As a society, we have realized that without technology our lives would be slow-paced. It has helped to improve people’s knowledge, ability to work, and greater ability to improve people’s communication. People need to be up to date with the technology because that’s what the future holds for us. In few years from now, we well depend on technology to survive; since it is becoming a part of our lives. People need to stop worrying about the negative impact of technology, and focus on what technology has to provide us. 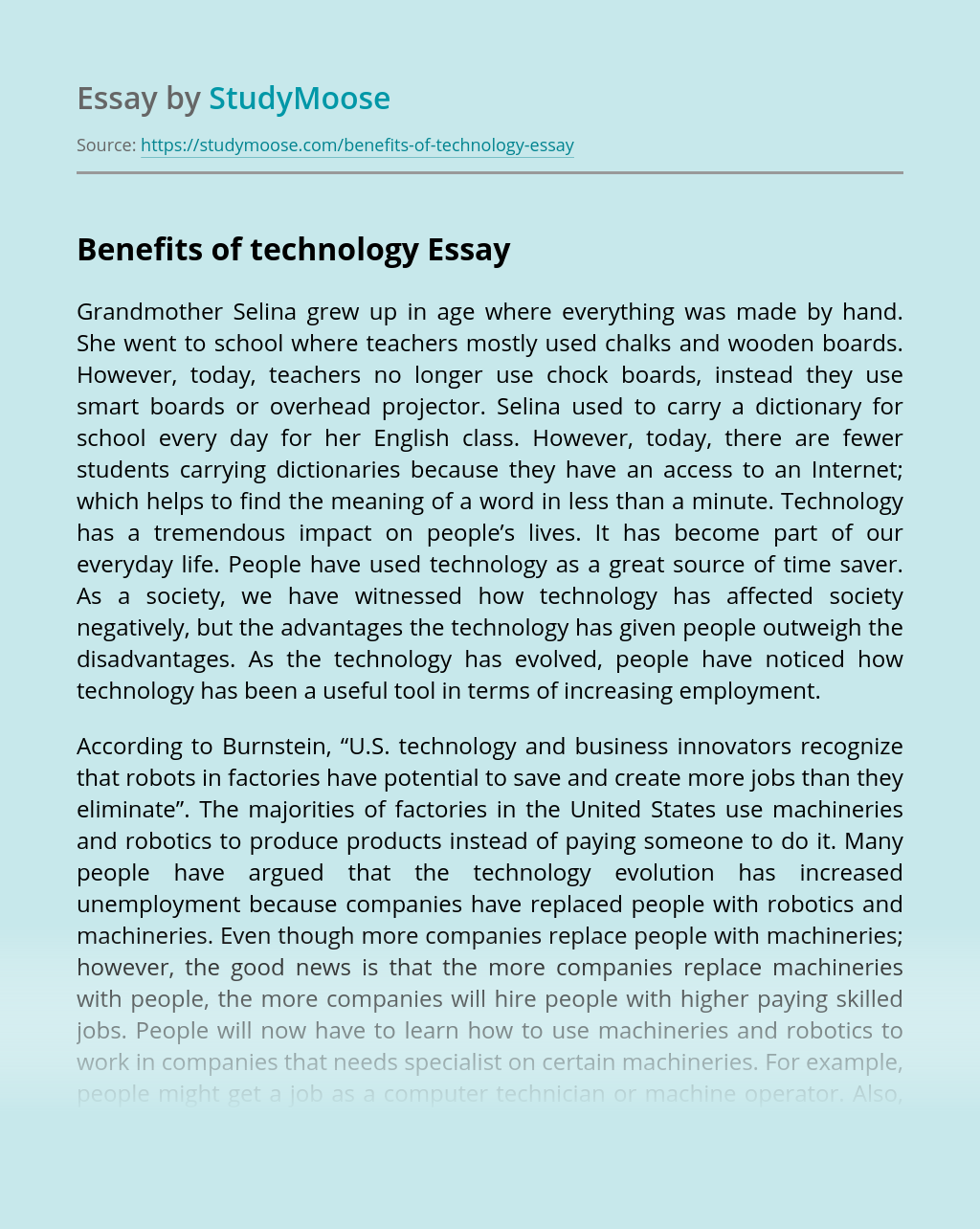