In life there is always a person, or role model that you will look up to and admire. A person may admire their role model, or mentor, because of their looks, wit, or even general personality. No matter who you are there is always someone that you attempt to emulate in some way, shape, or form throughout your life. There is no limit to the amount of role models one person can have. There may only be one person whose ideas you look at and agree with whole heartedly, or you may take portions from a vast number of others in order to create your own unique persona, and ideas.

Don't use plagiarized sources. Get your custom essay on
“ A Mentor ”
Get custom paper
NEW! smart matching with writer

For myself, a prominent mentor was my high school Chemistry and Physics teacher, Mr. Robert Hage.

I admired my Chemistry teacher not for his thinning white hair, or for that matter any of his looks, other than his always cheerful smile. I instead looked up to him as a mentor due to his unique personality, and his vast intelligence.

He had a love for cats, liberal ideals, and sweaters with an odd pattern displayed boldly on the front. Mr. Hage had a great sense of humor, and was an avid musician. These were the reasons that I admired Mr. Hage, because these were planes that I took interest in and that I could learn from him in.

In the classroom Robert Hage was what some students would call ‘a perfect teacher’ he was not incredibly strict, he didn’t ever hand out detentions, but instead would make a mockery of the any student that unintelligently disrupted his class, but did so in such a sly, humorous manner, that even the victim of the mockery would be laughing uncontrollably.

Robert Hage lived an expansive life that led him though a great number of careers including a Musician, Chemist, Physicist, Author, High School teacher, and finally, a mentor. Through this vast professional history he showed a great passion for everything he had done, and in doing so gained a large amount of knowledge, in which he would pass on to his students. This is what I admired most about Mr. Robert Hage; I admired his knowledge and passion of all things he did.

Read more: Whom I admire essay

In my sophomore year of high school I entered room 211 to go to Chemistry class. I had always enjoyed classes that pertained to a scientific field, and hoped that Chemistry would come as easily as the other subjects had to me. However, my freshman year the teacher who lectured the Biology class had no interest in the subject she taught and did so half-heartedly; I started to dislike the class. So I was wary about another teacher who just wanted to get through the class more so than teach the students. Needless to say, I was proved wrong, very wrong. The first day of Chemistry class Robert Hage performed a serious of ‘mystifying’ experiments such as lighting Magnesium on fire, which burns with a flame so white it will leave you seeing spots, and placing pure Sodium in a beaker of water, which will combust. Mr. Hage then stated “For those of you who had doubts coming into this room, Chemistry is fun”. That was all I needed to hear in order to know that this would turn out to be a fortunate turn in events.

As the year went on it seemed that my teacher and I had much more in common than I had initially hoped for. I was at an age where I had not yet taken a stance on any real issues but always sat uncomfortably on the fencepost. When I found myself pondering serious life questions, such as religion, he showed me answers through science and that it was perfectly fine not to accept a religion at all as long as you could provide evidence to support your claims. This was a new concept that had never been provided for me, and best of all it wasn’t force fed to me. When I questioned politics he presented the strengths of a liberal standpoint, but all the while letting me know that as long as I could justify my ideas, it was alright to take whatever standpoint I wanted.

Although, with every path that was opened, he always told the group in which it was presented to, not to just blindly accept what he said and run with it, but to examine both sides carefully and choose which you thought was the right one. With not only a rekindled interest in science, I was also left with the new interest of rhetoric and debate. With Mr. Hage’s encouragement I joined the high school debate team. When the season came for debate matches to begin; Robert Hage had some more advice for me which was, it is important to know how to argue your side, but more important to know how the opponent will argue theirs, and the best strategy is to beat them with their own words and facts. I will never forget these words, and they are filled with what is in my opinion some of the most valuable wisdom you will hear.

Robert Hage played a large role in sculpting my present day personality, and it is because of him that I have developed an everlasting love for music, and am now fluent in playing five different instruments. He is also the reason that I am comfortable with views that may not be shared with a vast majority. Most of all, he is the reason I chose the path in life that I did; he is the reason that I am currently pursuing my majors of the Chemistry and Pre-Medical fields. 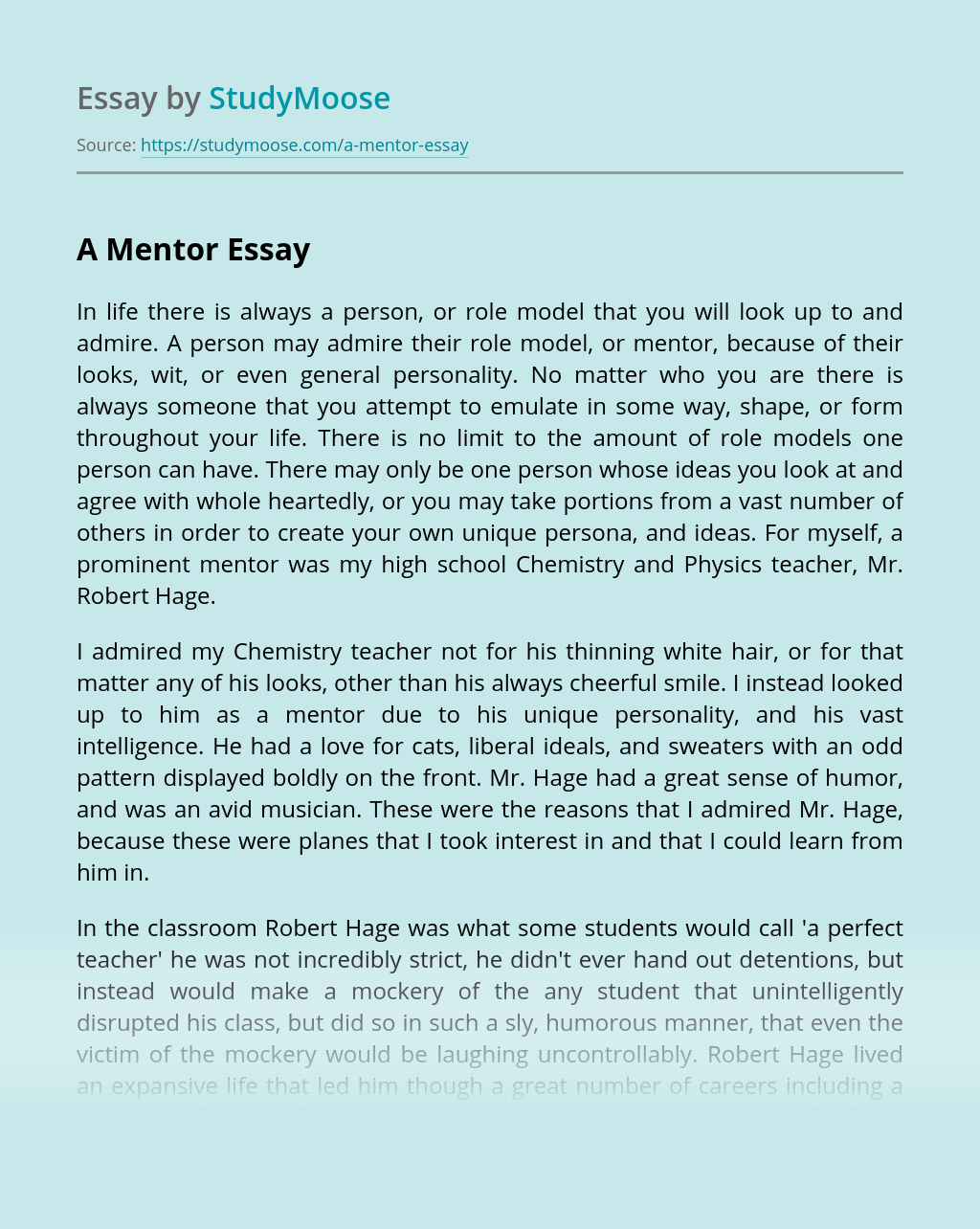