Assess Themistocles’ role in the Greek defeat of the Persians in 480-479 BC.

Don't use plagiarized sources. Get your custom essay on
“ Battle of Artemisium Themistocles ”
Get custom paper
NEW! smart matching with writer

Themistocles stands paramount above the rest of the Greek figures as the Athenian general, whose abilities as a tactician and strategist thwarted the Persian invasion force into mainland Greece. Described by ancient writer Thucydides as ‘an unmistakable natural genius… and deserves our admiration’, Themistocles was the most influential leader of the Athenian war effort against the Persians.

He realised that the Persian threat was imminent, even after the battle at Marathon and it was his radical advancement of Athenian naval power which allowed the Greeks to defeat the Persians in the battles in 480-479 BC. Themistocles was one of the few who realized the threat of future invasions from the eastern power of Persia. While the first invasion had been repelled by the Greek hoplite forces, the Persians were still very much an active threat.

Themistocles plan to defend the Greek mainland lay in the naval power which is why he strongly urged that the silver deposit discovered in the Laurium mines be used to strengthen and build the naval power of the city of Athens.

Others opposed him, deciding it was best if the surplus silver be divided among the citizens but Themistocles persevered and persuaded that the Delphic Oracle’s advice of a ‘wooden wall’ was referring to the ships.

One hundred triremes were built as a result (Herodotus says 200) and proved to be a vital decision in the upcoming battles, especially in the battle of Artemisium and Salamis which were primarily focused on naval attacks.

During the time leading up to the battle of Thermopylae and Artemisium in 480 BC, it was Themistocles’ idea to relocate to Thermopylae instead of the Vale of Tempe, Thessaly as their northern line of defence. Herodotus reasoned that the discovery of alternative passes allowed the Persians access to the mountains and would therefore need to be contained in confined areas.

The Greek strategy devised by Themistocles took into consideration the advantage of narrow passes and straits, hence the decision of relocating to Thermopylae and Artemisium. It placed a greater disadvantage for the larger Persian army; disruption of supply lines and minimised cavalry strength. The commander at Thermopylae, Leonidas, a Spartan commander led a small force of 300 Spartans and 7000 local Greeks to defend the pass, and it was due to Themistocles’ timely idea and Spartan skill that allowed the Greeks time to evacuate the city.

In the vicinity close to Thermopylae, a naval attack occurred simultaneously to Thermopylae in a narrow strait known as Artemisium. Eurybiades of Sparta assembled the ships as a support to the land attack and to keep the Persian fleet occupied, preventing further Persian advancement into the straits and central Greek. Themistocles, once again with Eurybiades was responsible for the decision of the locality, due to the covered entrance to the channel between Euboea and mainland Greece, it gave the Greek fleet a sheltered line of retreat and open communication.

The narrow strait restricted the larger Persian navy and allowed the Greeks to prevent contact between the Persian forces of Thermopylae. According to the Troezan Inscription, Athens was being evacuated at the time and it was critical that the Persians were delayed as long as possible. The battle at Artemisium effectively reduced the Persian fleet by half which would affect the next battle at Salamis. Without the vital contribution of Themistocles, the city of Athens would not have been able to evacuate and the Persians would have been free to conquer Attica, thus the role of Themistocles proved to be invaluable to the protection of Greece.

Themistocles’ role cannot be overlooked in the battle of Salamis, as his decision for remaining in Salamis resulted in the turning point for the Greeks against the war with Persia. According to Herodotus, there were a series of war councils in the decision of keeping the navy at Salamis or withdrawing to the army fortified at Salamis. The Peloponnesians opposed Themistocles, as they preferred defending the coastline closer to the Isthmus but he was able to convince Eurybiades and the other commanders that the ideal position was Salamis, reinforced by T. Buckley who says, ‘Themistocles was the architect of the defeat of the Persians: by choosing the scene of the battle …’ The proposed reason put forward by Themistocles, was that fighting in the narrows would favour the smaller and heavier Greek fleet as opposed to the Isthmus of open sea, which favoured the Persians superior numbers. The narrow waters gave the Greek a tactical advantage, as the Persian ships were slow and heavy compared to the fast and manoeuvrable Greek triremes effectively rendering them useless against the manoeuvre-and-ram tactic of the Greeks.

The decision of Themistocles contributed to the victory at Salamis and effectively stopped the army advancing to the Isthmus. Despite Themistocles’ genius, his methods were not as honourable as his character would suggest. He threatened Eurybiades as said by Plutarch ‘… our 200 triremes … if you want to be saved by them, but if you go and betray us again, the Greeks would soon hear that the Athenians have acquired a city. ’ If Eurybiades did not consent to fight at Salamis, the Athenians would leave Greece for good and settle in Italy.

It was a fundamental decision of Themistocles to remain stationed at Salamis, pivotal to the victory and results achieved. To lure the Persian fleet to Salamis, Themistocles devised a cunning plan to send a messenger, bearing false information of disparity among the council and of his defection to the King of Persia, Xerxes. According to Plutarch, the message said, ‘The Greeks are trying to slip away; he urges the king not to let them escape but to attack …’ Themistocles exploited Xerxes’ weakness of hubris and the gluttony of Eurybiades to position the fleet at the most advantageous.

His plan was successful and contributed to the significant victory at Salamis. Other smaller contributions made by Themistocles was that he realised the threat the ostracised Greeks placed on the safety of Greece as they were notorious for going rogue and siding with the enemy. Hippias and Demaratus previously joined the Persians in the hope of restoring their power against the people who were responsible for their fate. According to the Troezan inscription, the exiles were recalled and ordered to Salamis to await verdict on their future.

Themistocles’ decision allowed the significant role of Aristides, an important member during the Delian League and Athens’ transition to an empire. Similarly, was Themistocles’ judgment to evacuate Athens, with the battles of Thermopylae and Artemisium implemented to prevent Persian advancement to allow time. The inscription found in the Troezan, tells of the proposed ploy to evacuate the city of Athens. Even though his decision resulted in the death of Leonidas and his 300 Spartans, the destruction of a significant number of Greek triremes and the capture of central Greece, the people of Athens were saved.

Ultimately, the defeat of Persia can be attributed to many different factors but Themistocles’ role was most prominent of all the Greek individuals in ancient society. His leadership, tactics and strategies during the inter-war period and the numerous battles during 480-479 BC, was essential to Greek victory. His efforts to outwit and outthink the Persians are commendable and without a doubt, Themistocles had a significant role in the defeat of the Persian army. 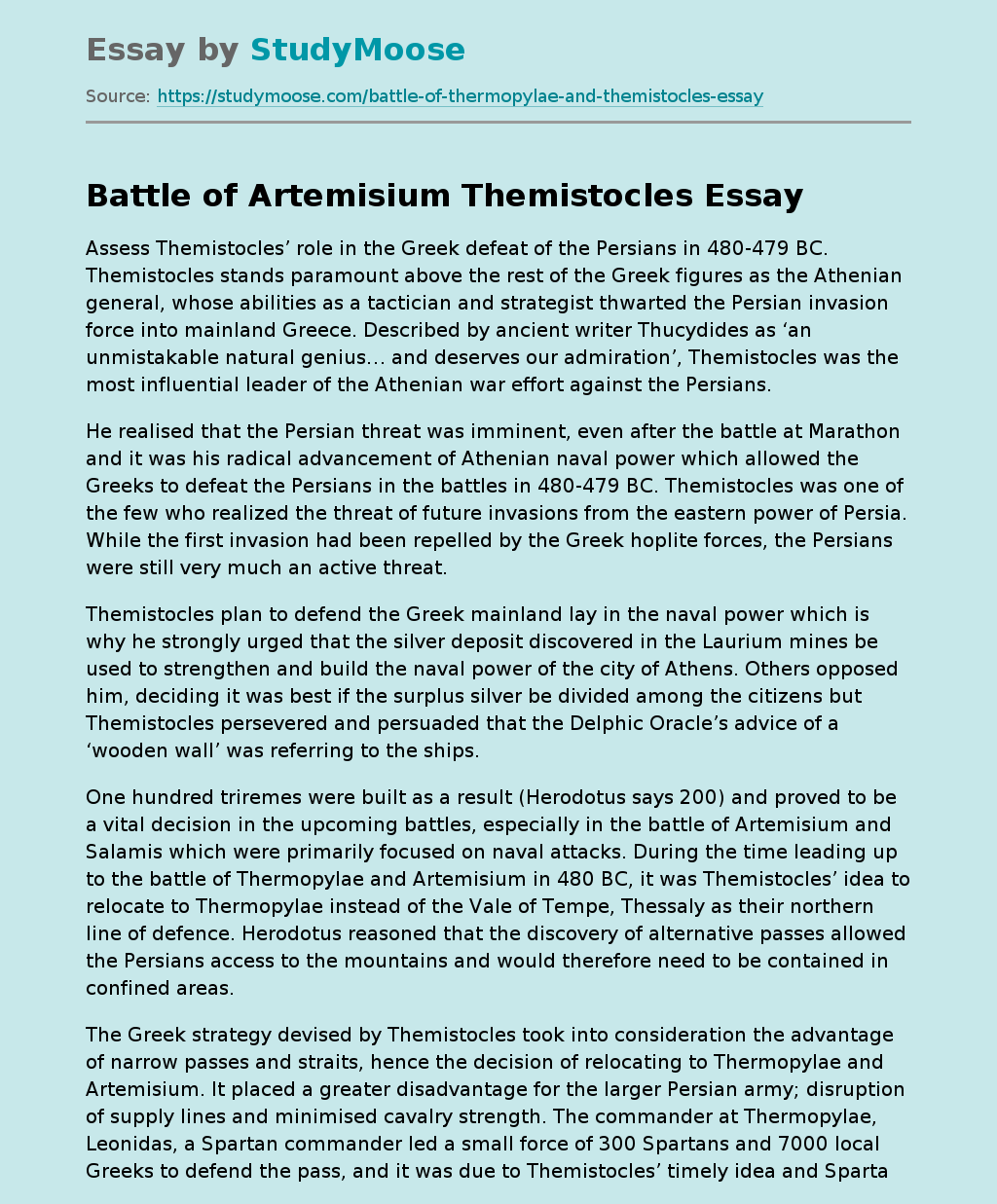