FedEx vs UPS - Battle for Value

United Parcel Service, Inc. (“UPS”) and FedEx Corp. (“FedEx”) are two of the largest air delivery and freight services. With the current transportation agreement between the United States and China the market in which these companies conduct business is going to grow. This is a positive agreement for both UPS and FedEx, meaning that both companies are attractive in terms of investing. However, it is recommended that only one of them should be invested in because they are very closely correlated to one another.

Don't use plagiarized sources. Get your custom essay on
“ FedEx vs UPS – Battle for Value ”
Get custom paper
NEW! smart matching with writer

Since this is the case it is important to look deeper into each company to determine the levels of attractiveness.

Even though FedEx has the early lead on operations within China, one only has to look at the European marketplace to evaluate how both companies will approach the new business environment post-agreement. Using the analogy of the tortoise and the hare, FedEx acts like the hare by quickly ramping up service by leasing new equipment and setting up distribution hubs.

This allows FedEx to get a head start and achieve early gains but this does not come without risks. Within Europe, FedEx made a number of risks and ultimately sold its European hub to DHL and it is estimated that they had lost upwards of $1 billion from 1984-1992 on the European business. Conversely, UPS is more like the tortoise by not being the first to market with a new service. UPS takes the time to do their analysis and to identify potential partners in order to share the risks for a new venture.

Within Europe, UPS did not enter the marketplace until 1988 but when they did enter, they did it by acquiring 10 European courier services.

This gave UPS an already-established network with which to grow without the start-up expenses that FedEx incurred. We can see that the same business-model approach is being used for China on both FedEx’s and UPS’s part. FedEx was the first to enter the China market by acquiring air routes that service China in 1995 and currently they provide 11 weekly flights to China, servicing 220 cities. On the other hand, UPS delayed their entry into the China market by establishing direct flights to China in 2001 but they have since partnered with Yangtze River Express to handle package delivery within China. Even with the late start, UPS currently provide 6 weekly flights to China and service 200 cities with their network. In a short amount of time, UPS has leveraged their business-model to significantly catch up with FedEx’s network coverage and appears to be primed to surpass FedEx in the near-term. EVA Analysis

In conducting a liquidity analysis on both UPS and FedEx, including financial measures like current ratios, cash ratios, cash from operations ratios, and defensive intervals, UPS is clearly the more attractive investment choice for any investor’s portfolio. Liquidity ratios measure a firm’s ability to meet its short-term debt obligations, and are thus a good indicator of a firm’s financial health. Between 2000 and 2003, UPS had a current ratio that remained significantly higher than its competitor FedEx. This indicates that in an emergency situation, if either company had to liquefy its current assets in order to pay off creditors, UPS would have a much better chance at coming out of that situation still in business, while FedEx may be closer to bankruptcy.

However, since not all current assets included in the current ratio can be easily liquefied to pay off short-term debt, the cash ratio is often used to measure financial health. If Bratt’s client is more on the conservative side, the cash ratio may be more important to them considering it only takes into account the firm’s ability to pay off its short-term debt obligations with cash and cash equivalents. UPS also overshadows FedEx in terms of this ratio. UPS’s average cash from operations ratio during these years is also higher than FedEx’s. This shows that UPS is better able to cover its short-term debt with cash from daily operations than FedEx is. UPS also has a higher defensive interval than FedEx, indicating that it could maintain operating with its current assets without any additional sales longer than FedEx could. Given these liquidity ratios alone, UPS is the better investment choice.

When you compare the four-year period of 2000-2003 as well as the larger period of 1992-2003, both UPS and FedEx show similarities in the way their profitability ratios are trending. The Net Profit Margin (“NPM”) trend lines follow the same ups and down, with only the magnitude differentiating UPS from FedEx. UPS has constantly been the more profitable company through both periods of time, averaging a NPM of 9.13% for 2000-2003 and 6.12% for 1992-2003 while FedEx has only averaged 3.47% for 2000-2003 and 2.69% for 1992-2003. The same can be said about the Return on Equity trend lines. FedEx has lagged behind UPS through the both time periods and shown by the following graph –

In taking into account each firm’s solvency ratios, UPS once again comes out on top as the better addition to a well-rounded investment portfolio. Solvency measures like debt/equity ratios, times interest earned ratios, fixed-charge coverage ratios, capital expenditure ratios, and cash from operations/debt ratios measure a firm’s ability to meet its long-term debt obligations. In comparing debt to equity ratios, UPS and FedEx are almost identical over the 2000-2003 period. Although FedEx’s ratio is slightly lower, it isn’t so much lower that it gives FedEx the competitive advantage or edge in the market. It appears that neither firm has taken on more debt than they can handle. In terms of paying down that debt, UPS has a much higher times interest earned (TIE) ratio than FedEx. Looking at the chart below, UPS can cover its interest expenses with its pre-tax earnings 3 times more than FedEx can, and is much less vulnerable to hikes in interest rates. This is especially impressive when you consider that UPS has twice as much long-term debt as FedEx.

FedEx’s solvency also appears weaker when you take into account fixed charges like rental or lease expenses. UPS’s lack of these expenses results in a fixed-charge coverage ratio equal to its TIE ratio, while FedEx’s average is dramatically lower. In addition to being the more reliable firm in terms of its ability to pay off long-term debt, UPS also has a higher capital expenditure ratio. UPS has also increased its capital expenditure ratio while FedEx’s has remained rather stagnant. This shows UPS’s ability to take its free cash flow and invest it back into the company through long-term asset acquisitions, demonstrating the potential for future growth of the company. It also shows that UPS is earning slightly more from its capital expenditures than its spending on them. The overall cash from operations to total debt ratio is relatively equal between UPS and FedEx. However, UPS’s ratio has been increasing over the last couple of years, while FedEx’s has decreased. Taking all of these solvency measures into consideration, UPS still appears to be the more attractive investment option for Bratt’s client.

In terms of operational efficiency measures, like average days outstanding, working capital turnover, fixed asset turnover, and total asset turnover, FedEx appears to have the advantage. Although UPS may take a little bit longer to collect on its accounts receivables, and may take longer to convert capital into sales, it is still maximizing shareholder value just as much as FedEx, and in a less risky way.

When you compare the stock price analysis for both FedEx and UPS, both companies have returned positive Compound Annual Growth Rates (“CAGR”) for both the 2000-2003 time frame as well as 1992-2003. Over the longer period, UPS has returned 20.89% versus 18.18% for FedEx but for the more recent 2000-2003 period, FedEx has returned 3.94% versus 1.95%. This variance in CAGR can be explained by the perception that FedEx was a growth stock and paid no dividends while UPS continually paid a dividend. This can also be seen when you compare the Cumulative Market-Adjusted Returns (“CMAR”) of both UPS and FedEx. Due to the inclusion of the dividend payments, UPS surpassed FedEx in this analysis by producing a 551% CMAR versus FedEx’s 373%.

Both UPS and FedEx are companies that have a positive trend and are well worth investing in. However, as both companies are closely correlated, if it recommended that you only invest in one of them. It is Bratt’s recommendation to invest in UPS. UPS has the long-term strategy in place to ensure more stable returns as opposed to FedEx. FedEx may have short-term gains but these gains are not sustainable and FedEx is at risk for adverse returns in the mid-term while UPS continually shows a proven track-record of steady gains through the short and long-term.

FedEx vs UPS - Battle for Value. (2016, Apr 18). Retrieved from https://studymoose.com/fedex-vs-ups-battle-for-value-essay 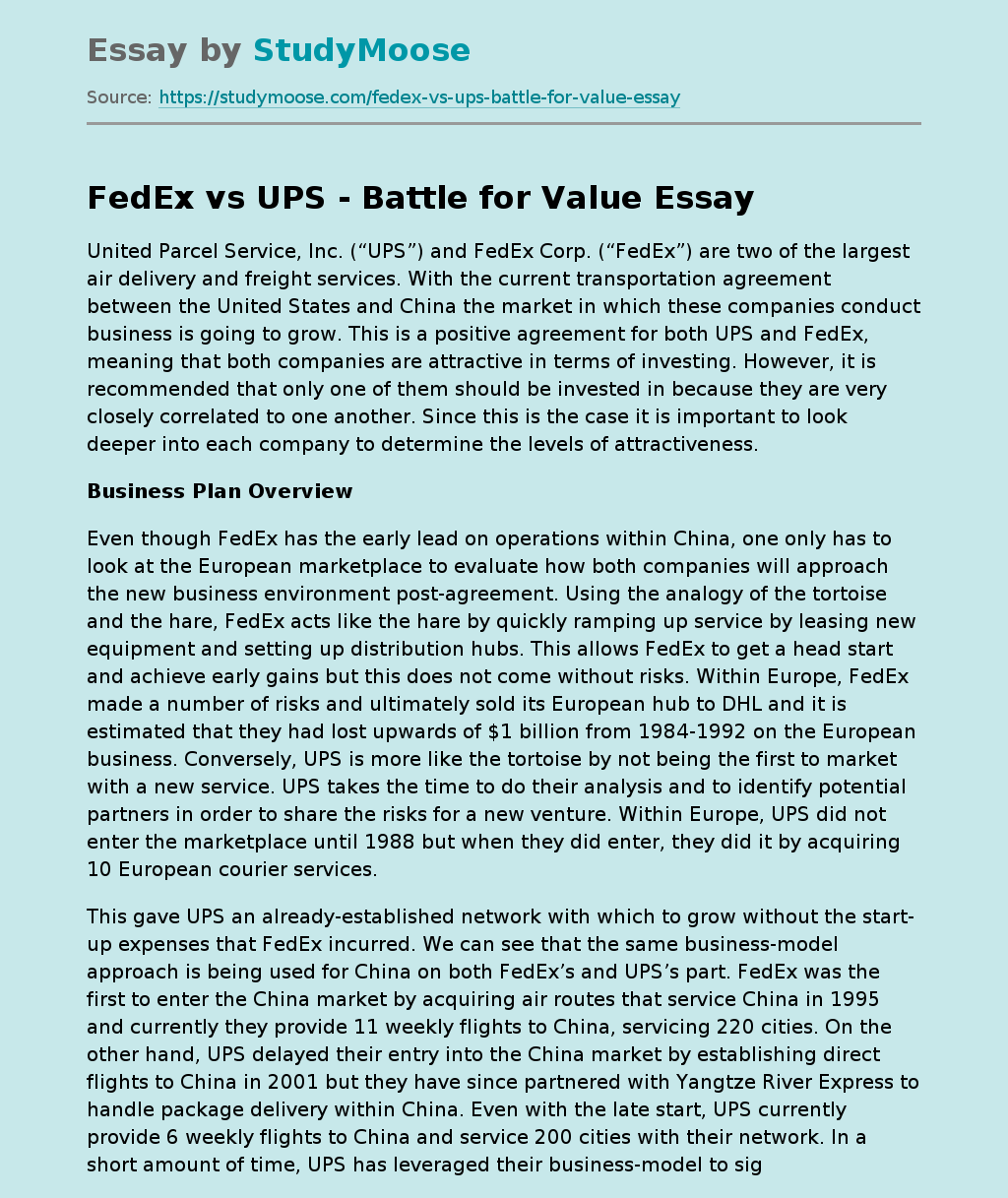