A Historical Event, The Battle of Bunker Hill

The American Revolutionary War is the war that Americans overthrew the British colonial rule, won the independence and it is also the war that was conductive to the development of capitalism in the United States and helped the United States developed the capitalist economy. The Battle of Bunker Hill, as the early battle in this historical war, is also a significant battle during the war.

The Battle of Bunker Hill took place on June 17, 1775, mostly on and around Breed’s Hill.

Don't use plagiarized sources. Get your custom essay on
“ A Historical Event, The Battle of Bunker Hill ”
Get custom paper
NEW! smart matching with writer

The leader of the colonial forces besieged Boston and learned that the British generals were planning to send troops out of the city to occupy the unoccupied hills that surrounding the city. As a result, colonial troops, which were under the command of William Prescott, stealthily occupied Bunker Hill and Breed’s Hill. And also they constructed an earthen redoubt and built fortified lines on the hills.

However, On June 17, some 2,200 British forces under the command of Major General William Howe (1729-1814) and Brigadier General Robert Pigot (1720-96) landed on the Charlestown Peninsula then marched to Breed’s Hill.

Proficient in: A Historical Event

When the Redcoats were within several dozen yards, the Americans let loose with a lethal barrage of musket fire, throwing the British into retreat. After re-forming their lines, the British attacked again, with much the same result. Prescott’s men were now low on ammunition, though, and when the Redcoats went up the hill for a third time, they reached the redoubts and engaged the Americans in hand-to-hand combat. The outnumbered Americans were forced to retreat.

However, by the end of the engagement, the Patriots’ gunfire had cut down some 1,000 enemy troops, with more than 200 killed and more than 800 wounded. More than 100 Americans perished, while more than 300 others were wounded. [1] General Clinton, echoing Pyrrhus of Epirus, remarked in his diary that “A few more such victories would have shortly put an end to British dominion in America.” [2] Although the British won the battle in the end and captured the commanding position—Charles Town (which is on the opposite shore of Boston), they paid a heavy price. Due to excessive casualties, house vetoed the Bill Clinton’s proposal that to attack in Cambridge. On the other hand, colonists lost the battle in the end but with few casualties. They continued to surrounding Boston. As a result, the war was starting to stalemate.

Despite losing their strategic positions, the battle was a significant morale-builder for the inexperienced Americans, convincing them that they could beat superior British military. Additionally, the high price of victory at the Battle of Bunker Hill made the British realize that the war with the colonies would be long, tough and costly.

A Historical Event, The Battle of Bunker Hill. (2016, Apr 29). Retrieved from http://studymoose.com/a-historical-event-the-battle-of-bunker-hill-essay 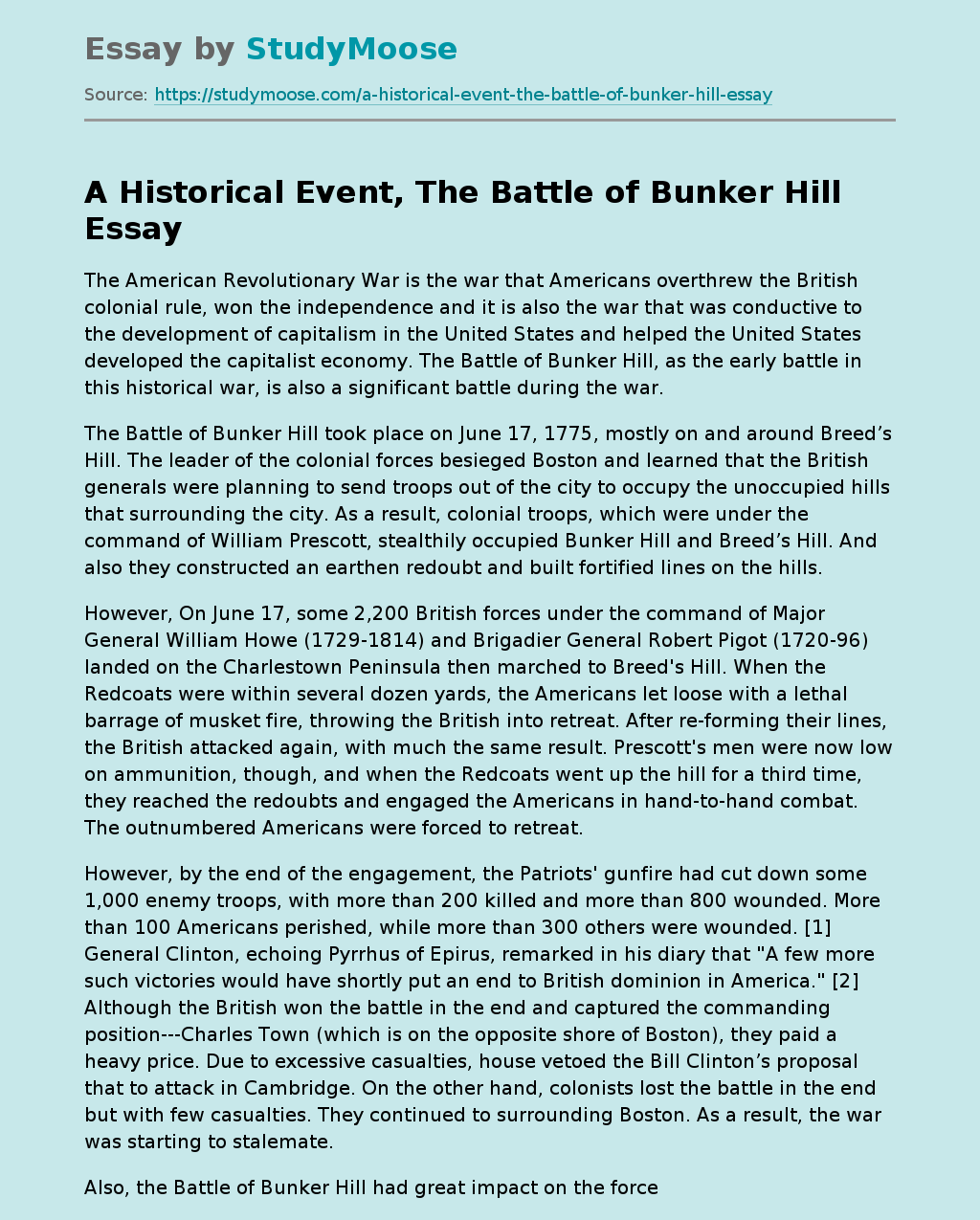