Don't use plagiarized sources.
Get Your Custom Essay on Community Profile Just from $13,9/Page

Many companies around the area have also closed resulting in a high number of people living on the Hawbush Estate being unemployed. I have changed the names of any people I have wrote about in this assignment to protect their identity. My observation from walking around the Hawbush Estate The first time I walked around the Hawbush estate it was at 6pm on one Friday evening in October 2010, during this time I noticed that there were quite a few young people who had congregated in the play area located near Hawbush Primary School.

I asked the girl if she liked living on the estate, she said that she liked to hang around with her mates on the wall, as they have a laugh but other then that there was nothing else to do. I went inside the shop on the Hawbush Estate, which sells general food items, newspapers, alcohol and tobacco; I noticed that there was no fresh food items for sale in the shop at that time.

I asked the manager about the people that access the community centre, the manager said that the centre is currently used every week by Rainbows on Wednesday evenings, a karate club takes place every Tuesday evening, a needlework group during the daytime on Mondays, and sometimes the centre is used for jumble sales to raise money for local causes. Meeting with a local resident I made arrangements to see a lady called Jane at home, Jane is a single parent who lives on the Hawbush Estate and lives with her 3 daughters.

I first met Jane a few years ago when she was volunteering at a food bank. Jane has been living on the estate for 38 years, she has her own council house now on the estate but was raised on the estate when she was younger, Jane expressed that she was worried because the government are going to cut her benefits because she has school age children and is unemployed. Jane explained that she had been for several interviews for shop work, care work and cleaning jobs but like many other single parents on the estate she had not been successful in getting a job.

Jane said that it’s been really hard looking for work; with they’re being a lack in the availability of jobs that she can apply for having no qualifications. I asked Jane if she knew whether there were many other people unemployed on the estate, Jane said that many other people on the estate were also out of work; especially since a lot of the manufacturing companies in the local area had closed.

Jane said that her dad used to work at the Round Oak Steel Works, and back then the steel works employed a lot of people on the Hawbush Estate, Jane added that there were whole generations of families who were employed by the steel works. I asked Jane about her 3 daughters, Jane said Emily is 15, Sophie is 13 and Holly is 10 years old, Jane explained that she likes to spend as much time with them as possible, but money is tight and that they get bored quite easily especially during the 6 weeks holidays from school, Jane said she finds it really difficult to do things with them that does not cost money.

Jane said that she worries particularly about Emily and Sophie, they are sensible girls but they have both been offered cannabis when they have been out and about on the estate with their friends, Jane said that she wishes that there was something for them to do in the evenings in the local community, the youth centre is to far away for them to go there. I asked Jane what she thought the positive things were about the community, Jane replied by saying that she said the access to the primary school is really good as it is only a couple of streets away and the high school is only 10 minutes walk.

Employment History The nearest town to the Hawbush Estate is Brierley Hill, which used to be heavily industrialised having numerous factories, ironworks and many large quarries and collieries that produced building materials and coal. Marsh and Baxter was a major employer in Brierley Hill, who were once the largest meat processing plant in Europe, however the plant closed down in 1979.

The Round Oak Steel works was also another large employer, employing some 3,000 people, but sadly closed in 1982 after being open for 125 years, the companies closure was due to them being unable to compete with the introduction and increased usage of alternative materials. Employment has suffered in Brierley Hill due to the decline in the manufacturing industries, this has resulted in a lack of employment opportunities being available to the surounding communities.

In 1985 the site of the Round Oak Steel Works was redeveloped into offices, a hotel and a marina named ‘The Waterfront’, today 5. 200 people are employed there, the main employers on the Waterfront are the Inland Revenue, Child Support Agency and a bank call centre, however 34% of the jobs were already taken by people who moved with their current employers to the Waterfront. The majority of the people who work at the Waterfront are women in clerical roles, wheras the Round Oak Steel works that was previosly there mainly employed men in the manufacturing industry.

The borough has a working population of 221,000 however, Brierly Hill still today remains a deprived area, a third of the working population have no formal or recognised qualifications and average incomes for workers are amongst the lowest in the West Midlands. Benefit Claimants The most recent recorded statistics from the National Statics website are from 2007, the following graph displays the percentage of benefit claimants as a percentage of the working age population. It is clear in the graph that he percentage of claimants for the Hawbush neighbourhood was considerably higher in 2007 than in the Dudley Borough and England as a whole.

The Hawbush Primary School is located on the Hawbush Estate, Wordsley School is the nearest high school to the Hawbush Estate. Information from the Hawbush Primary Schools Ofstead report from 2008 shows that in there were 249 mixed pupils aged 3 – 11 years who attended the school. Pupils who attended the school who had learning difficulties or disabilities in 2008 was well above the national average. The Wordsley School’s Ofsted inspection took place in June 2010, at that time there were 755 mixed students attending the school who were aged 11 – 16 years.

Students who attend the school with learning disabilities or special needs is high and has been rising, there is an average amount of students who have statements in place. The national statistics online shows that in 2008 –2009 the educational attainment for the neighbourhood was relatively low in comparison to other areas The following statistics is data that has been taken from the Ofstead reports for Hawbush Primary School and Wordsley High School. Key stage one is usually assessed at the age of 7, the table below shows data on pupils that have achieved Level 2 or above in Reading, Writing and Maths:

Crime in Brierley Hill Figures from The West Midlands Police show that from September 2009 to August 2010 there were 2,431 crimes recorded by the police that took place in Brierley Hill, during the same period the police recorded 1,352 incidents of anti-social behaviour. There was a 1% decline in crime in comparison to the previous 12 month period. In comparison to other areas in the West Midlands the crime & anti-social behaviour rate in Brierley Hill is relatively high. Conclusion Researching the Hawbush Community has shown that there are plenty of areas that can be improved to enhance the community life of the people who live on the estate.

In my opinion I think that the Hawbush Community Centre could be used more effectively and run to its full potential by providing the local community with the chance to enrole on courses that could be run there to help people gain qualifications and training that would help them gain employment. Employment would enhance the well-being and health of the people who live in the community, a mobile creche could be arranged at the community centre which would benefit the high number of single mothers living on the estate who are at risk of losing their benefits if they have school aged children and are not in employment.

The community centre could also engage the young people who live on the estate by running youth groups and enabling the young people to meet positive role models/mentors which could enrich their lives by giving them a sense of pride and belonging. The educational attainment could be increased by providing the local schools with extra funding to help children and young people from the community reach higher grades, this could enable them to go onto higher education or enable them to access employment. 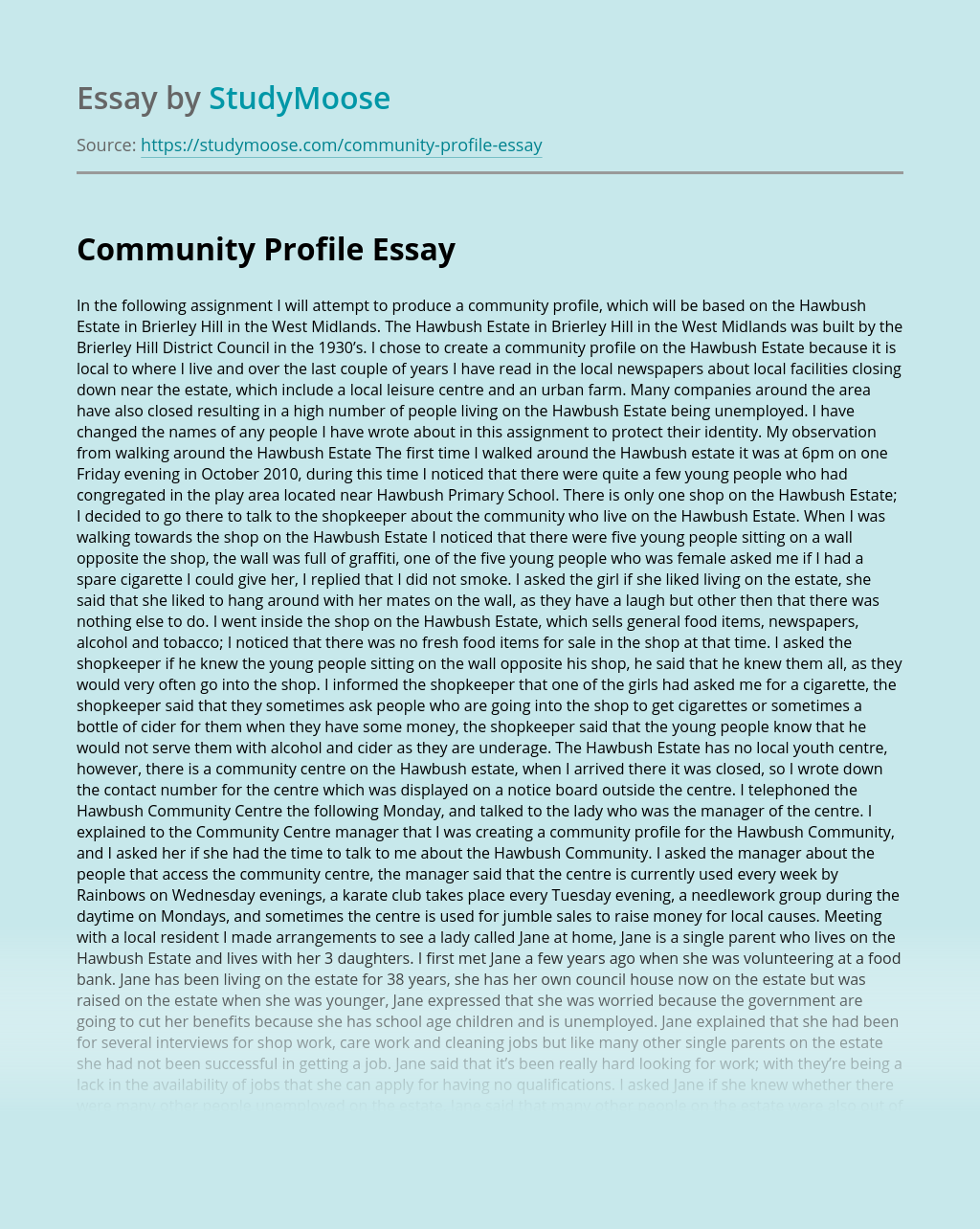 Aspects of Love in Othello Quotes

“She loved me for the dangers I had passed/ I loved her that she did pity them” Othello, act 1 scene 3, love as healing, or as mutual sympathy in times of despair “And this, and this, the greatest discords be/That our hearts shall make.” Othello, act 2 scene 1, Serious irony and tempting fate,...

Vocational education covers education and skill established at all levels from post-primary to tertiary education both through formal and non-formal program. Technical and Vocational Education, defined it as a “Extensive term accepting those elements of the educational process including, in addition to general education, the study of technologies and associated sciences and the acquisition of...

Customer acquisition consists of the business processes in the CLC leading up to the customer moment, when consumers become customers . . . or not. This includes awareness generation, knowledge transfer, consideration, pre-sales, and evaluation. Capabilities include consumer surveys in business operations, tracking enterprise-wide customer interactions in business management, and market basket analysis in business...

This assessment consists of 30 multiple-choice questions. The questions cover aviation subjects studied for the issue of the commercial pilot’s licence and general aircraft handling. The questions are answered by pointing and clicking the required answer using the mouse. To move to the next question click on the ‘next’ button. To go back to a...

Are you tired of those same old pizzas? Do you enjoy a pizza tastes like cardboard? Do you really prefer a pizza that has been sitting on a warmer for hours? These are just some of the reasons why they say, “You get what you pay for.” That is why making your own could be...